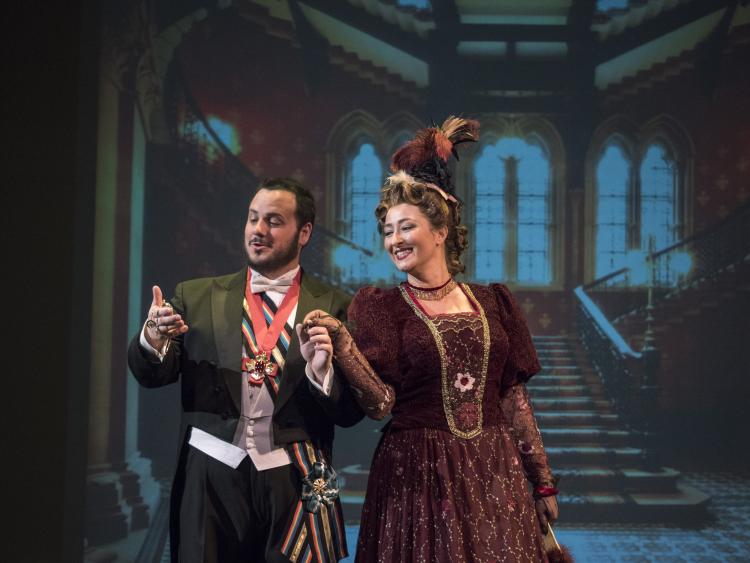 Joshua DeVane and Neila Getz appear as Eisenstein and Rosalinde in this Friday and Sunday's performances of "Die Fledermaus" at Macky Auditorium.

It’s hard to believe when you consider that just a few years ago, DeVane wasn’t even thinking about a career as an opera singer.

“I had a degree in IT. I was working as a systems manager for a county in Georgia,” he recalls.

DeVane, now a baritone in the second year of his master’s studies, has always enjoyed music. He grew up in Georgia in a family of five, his mother and father encouraging him and his younger sister to learn piano early on. But he says where he grew up, kids just didn’t have their sights set on a career in opera.

“It was a small town in South Georgia. It was a great place to grow up, but there wasn’t really art of any kind. I didn’t know I could sing for a living.”

So he went to school to earn an IT degree, graduating from Georgia Southern University and working near home in a job that had nothing to do with music. DeVane says he knew something wasn’t right.

“I wasn’t happy. I didn’t like the hours, it was very stressful—and I just wasn’t happy with myself as a person,” DeVane explains.

“I got laid off during the recession in 2009. I knew that I had to take that opportunity to go back to school.”

But rather than furthering his technology studies, DeVane decided to take a leap. He went back to Georgia Southern, this time pursuing a bachelor’s degree in voice performance.

“While I was getting my IT degree, a friend of mine convinced me to join choir. I started to make friends with the voice students, and I went to their operas to watch. It was like something clicked. I got swept off my feet by opera,” he says.

“So when it came time to go back to school, I decided to get a voice degree. I didn’t know if I would be any good at it, but I knew I liked it and I wanted to pursue it.”

After a year in the voice program, DeVane knew that music was the path for him. He felt more fulfilled—happier than in his previous career. Then, just as he prepared to graduate and enter the opera world, tragedy struck.

“Right at the end of my bachelor’s degree, my mom died. She had been battling cancer for a couple of years,” he explains. “I felt like I needed to be near my family—and I stopped singing.”

Instead of leaving home for opera training elsewhere, he stayed at Georgia Southern, working as a staff pianist and teaching music theory. He played piano at a local church, earning valuable experience and helping his father cope.

But he couldn’t bring himself to sing.

Then in 2014, he got a call from an old friend with an offer that she wasn’t going to let him refuse.

“A friend of mine, who owns a small young artist company in Texas, called and asked if I would come sing [the lead part of] John Proctor in their production of ‘The Crucible.’ Even then, I told her I wasn’t singing anymore.”

But the lure was there, and the friend was persistent, so after much back and forth, DeVane took yet another leap and joined the production. It’s a move that he says changed his life.

“One of the first rehearsals I looked around and realized that this was what I needed to do.”

DeVane started looking for graduate programs and came to the College of Music in the summer of 2015 to study with Patrick Mason. He says in the past year, he can point to marked improvement in his singing.

“I actually sang the part of Eisenstein a year ago as a guest artist at Georgia Southern,” he explains. “And while singing the same part now, it’s obvious to me that I’ve gotten better. I have concrete proof that I am improving.

In addition to appearing in last year’s “La Cenerentola” and CU NOW’s production of “A Song for Susan Smith,” DeVane has made it a point during his time here to give back to the community, doing outreach performances with the Opera Theater Singers in hopes of inspiring other young would-be singers to consider a career they never thought about before.

“I would have loved to see this group swing by when I was little,” he says. “Somewhere out there, there’s a little Michael Jordan who just hasn’t had a chance to pick up a basketball. I think the same future opera star exists, and we’re helping improve his chances of being exposed to the art.”

DeVane is also fleshing out other skills that will make him more marketable as a musician: he took over this year as choir director at Grace Lutheran Church on the Hill.

Throughout the final year of his graduate studies, DeVane, like many of his peers, will travel the audition circuit, hoping to land a gig at an opera company or residency program. But he says no matter where his winding road ultimately leads him, he knows that music will always be a part of it.

“Music was a hobby at first—something my mom made me do that I immediately enjoyed. Now, I can’t imagine doing anything else.

“There’s not enough time in one life to try 1,000 different careers and find the one that’s perfect for you. I’m so lucky that I’ve found singing.”

Joshua DeVane plays Eisenstein in the Friday and Sunday performances of “Die Fledermaus.” Also joining the students of the Eklund Opera Program on stage will be a CU Boulder who’s-who of special guests: Chancellor Philip DiStefano, Department of Theatre & Dance Chair Bud Coleman and even the Eklund Opera benefactor and namesake, Paul Eklund.

For ticket information and to purchase tickets, visit the CU Presents website.

Discovering and playing the music of composers who have been historically marginalized is a wonderful educational experience for all students, regardless of gender or ethnicity, says Professor of Piano Pedagogy Alejandro Cremaschi. END_OF_DOCUMENT_TOKEN_TO_BE_REPLACED

Assistant Professor of Composition and Pendulum New Music Director Annika Socolofsky discusses her recent incentive prize and how she perceives her role as a composer, performer and educator. END_OF_DOCUMENT_TOKEN_TO_BE_REPLACED
Return to the top of the page