Faculty and students ring in the 2016-17 academic year 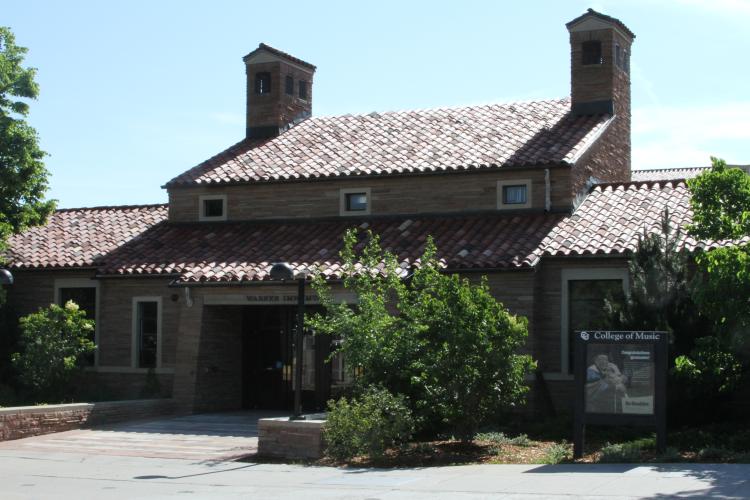 Around Imig Music, things feel a lot different this week than they did last week. An empty practice room is now hard to come by. So is an empty chair in the Tile Lounge. And of course, music is once again lilting through the hallways.

Summer’s over and the fall semester has arrived. Between new classes, growing ensembles, long-awaited recitals and international performances, there’s plenty to be excited about.

“I’m really looking forward to being back for one last year,” says Caroline Vickstrom, a senior music education and voice performance double major. “We have three great operas planned, and I’ll be singing in the chorus during ‘Die Fledermaus’; so I’m excited for that.”

Vickstrom returns to Boulder after spending part of her summer in an immersive, four-week program at Up North Vocal Institute. “The best way I can describe it is opera camp,” she says.

Run by College of Music Assistant Professor of Voice Matthew Chellis, the camp invites 20 voice students from across the country to northern Michigan for four weeks of one-on-one lessons and group performances. In addition to the intensive training, the program offers networking opportunities. “It was really cool to meet other singers who were generally my age and work with faculty from Eastman [School of Music] and other schools,” Vickstrom says.

Vickstrom says talking to other students was eye opening.

“I kept thinking to myself that Boulder is the best place to go to college. There’s just a really good vibe and a good environment. The College of Music has that same good vibe … the faculty and students are fantastic and supportive.”

Jazz studies master’s student Decker-Thomas Hill Babcock echoes that sentiment—and Vickstrom’s excitement for being back at it.

“I’ll be expanding my classical playing this year,” Babcock says. “I consider myself a commercial player, so I want to have experience on both jazz and classical trombone.”

Babcock, who is a performing artist for XO Brass, says it’s the professional experiences he and his peers get—including an upcoming jazz ensemble performance in Costa Rica during spring break 2017—set the College of Music apart.

“The professionalism that’s expected of us might come as a shock at first, but it drives us to achieve what we might not have thought possible.”

Babcock spent his summer gigging throughout the Pacific Northwest, visiting the region for the first time. Both he and Vickstrom have recitals planned for this year.

For faculty, the new year means an opportunity to carry on the momentum of the spring.

“There’s a lot of excitement for the concert band and orchestra,” says Assistant Director of Bands Matthew Dockendorf. “We’re getting more people involved around campus and bringing fresh faces into the college, and I’m looking forward to continuing that trajectory.”

Additionally, Dockendorf says the Golden Buffalo Marching Band and Athletic Band are considering new pep events for game days this year. He says planning has also begun for next year’s Summer Music Academy and Conducting Symposium, which saw some of their highest attendance numbers this summer. Dockendorf will direct the Summer Music Academy again in 2017.

Associate Professor of Theory and department chair Yonatan Malin is getting ready for a first in his teaching career. “This will be the first time I’ve ever taught a composer-oriented course,” he says.

Malin and Associate Dean for Graduate Studies Steven Bruns will each teach new seminars for the music theory department this semester: Malin will focus on Schubert, while Bruns’ seminar will be about George Crumb.

“We wanted to set up these seminars as a framework for people to develop research into the areas they’re interested in,” Malin says. “I’ve loved Schubert since my college days and I’ve worked a lot on his songs, but this will allow me to look at his instrumental music.”

The music theory department also welcomes a new faculty member this semester. Karin Buer, who received her master’s degree from the College of Music, returns to her alma mater as a theory lecturer. 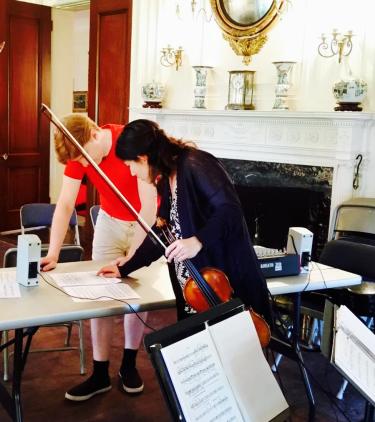 Harumi Rhodes mentors a young composer during the CULTIVATE 2016 program at Music from Copland House this summer.

The string area is also growing: Margaret Soper Gutierrez is returning as violin lecturer. “It’s really exciting to have someone new on board with us,” says Rhodes.

Rhodes, who came to the College of Music one year ago, spent her summer performing both in her new state of Colorado and on the East Coast. She also worked with young musicians and composers around the country.

“Commissioning was kind of the theme of the summer for me,” says Rhodes. “I was on the commission committee for the East Coast Chamber Orchestra, and I spent my fourth year as an artist mentor with the CULTIVATE program at Music from Copland House, which supports young composers. I always look forward to going back because I really believe in being part of the composing process and seeing what kind of music is being written.”

She says she hopes to see that passion for new works trickle down among the students in her studio.

“My students have been commissioning and working with the composition students, and watching that process has been thrilling to me.”

Rhodes herself is slated to perform with the Pendulum New Music ensemble in March 2017. This and other opportunities for collaboration beckon as the year begins.

“I want to build an even stronger sense of community in my studio,” Rhodes says. “I spent my first year here laying the groundwork for this new energy that we have, and this year we’re going to continue that and embrace it with the new students coming in.”

The new academic year officially kicks off with College of Music Dean Robert Shay’s convocation, which is coming up on Tuesday, Sept. 6.

Discovering and playing the music of composers who have been historically marginalized is a wonderful educational experience for all students, regardless of gender or ethnicity, says Professor of Piano Pedagogy Alejandro Cremaschi. END_OF_DOCUMENT_TOKEN_TO_BE_REPLACED

Assistant Professor of Composition and Pendulum New Music Director Annika Socolofsky discusses her recent incentive prize and how she perceives her role as a composer, performer and educator. END_OF_DOCUMENT_TOKEN_TO_BE_REPLACED
Return to the top of the page