The poetry of music 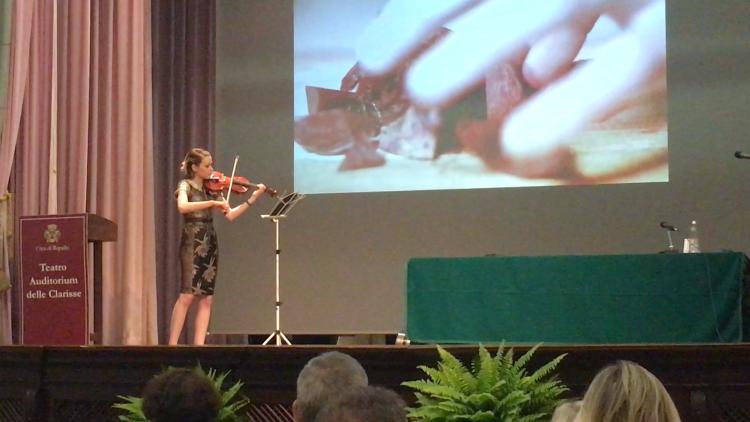 Leslee Smucker presents "Personae" at a conference on the work of Ezra Pound and T.S. Eliot in Rapallo, Italy this June.

Sometimes the most beautiful and memorable form of artistic expression comes at the crossroads of two different disciplines.

That’s what violinist Leslee Smucker has found throughout her music career.

“I've always been interested in the combination of different arts and how they interact. We can learn so much from other art forms, as well as from other types of music,” says the doctoral candidate, who minored in art as an undergrad.

This year, Smucker presented two multimedia recitals combining these two loves. The subject of her work is the music and poetry of Ezra Pound.

While most people know Pound as a poet, he was also an active composer, writing operas and works for solo violin.

“What makes him so interesting,” Smucker says, “is his use of rhythm and forms of poetry in his musical works.

“For example, in Pound's piece Sestina: Altaforte, Pound uses the ancient troubadour form of the sestina as his musical form as well. This was based on his poem of the same name."

Inspired by Pound’s many-layered artistic output, Smucker collaborated with several composers and a filmmaker to put together a multimedia presentation called “Personae” for the conference “Terrible Beauty,” hosted at the University of Virginia in April. She took the presentation to a conference on T.S. Eliot and Ezra Pound in Rapallo, Italy, earlier this month.

“We focused on Pound’s use of his poetry in his violin pieces,” Smucker explains. “I collaborated with a filmmaker friend, Jacob Landis-Eigsti, to create a cinepoeme of a sestina. The film has six repeating scenarios shown in a different light each time, similar to the form of the poem.

“I explored the use of individuality in relation to unique musical voices. The term ‘Personae’ refers to both Pound's anthology of short poems, in which he takes on masks and different voices through poetry, and also the way he used his own unique voice through music.”

Among Smucker’s collaborators were College of Music students JP Merz and Egemen Kesikli. She also collaborated with poet Jesse Nathan, who’s working on his PhD in English at Stanford University, to write his own sestina that traversed the entire span of the program. The collaboration was recorded by Smucker’s sister, Lana Smucker.

The theme throughout the program is to place ancient stories and characters in a modern setting.

“Ancient subjects and revival were important to Pound, and this is reflected in his music as well as his poetry,” Smucker says. “The violinist he wrote his pieces for revived the works of Vivaldi and other composers.”

Smucker is recording the works and will present the full version of “Personae” as her second solo recital in the ATLAS Black Box Theater on March 3, 2017.

Curiosity drives Lydia Wagenknecht, a PhD candidate in ethnomusicology and recent recipient of a Fulbright Research Award. “I care that my research will help us understand something in a more broad-based way that we didn’t understand before,” she says. END_OF_DOCUMENT_TOKEN_TO_BE_REPLACED

We’re so excited to welcome alumnus Damani Phillips back to campus this week and to present him the College of Music’s 2022 Distinguished Alumnus Award at our commencement ceremony on May 5! “The versatile training provided by CU has been the cornerstone of my success to date, and has enabled me to do and be many things well beyond typical expectations,” he says. Meet Phillips and discover his powerful advice to graduating Music Buffs. END_OF_DOCUMENT_TOKEN_TO_BE_REPLACED

On May 5, we look forward to welcoming back Judith Glyde, formerly professor of cello and chamber music at the College of Music and chair of our string faculty. Since retiring in 2014 to live in New York City, the professor emerita she has been active with the college’s alumni community there, offering tremendous support to Forever Buffs who are now living and working in the city. END_OF_DOCUMENT_TOKEN_TO_BE_REPLACED
Return to the top of the page