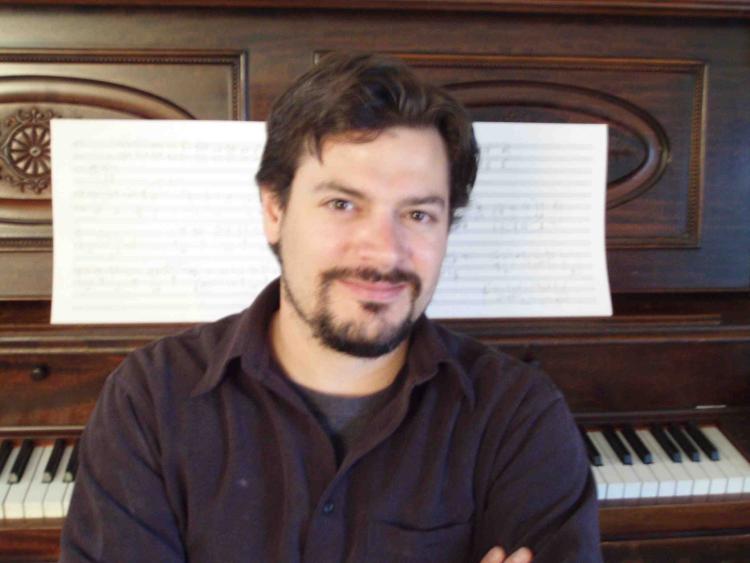 A College of Music composer can now claim the distinct honor of being one of those three finalists.

This year was the 100th anniversary of the Pulitzer Prizes, and as the dust settled and the winners were announced, Associate Professor of Composition Carter Pann was revealed to be one of the two finalists.

“I was very surprised and honored!” says Pann.

The news founds its way to Pann during a rare lull in an ordinarily wall-to-wall schedule. He was enjoying a moment poolside on a trip to Miami to premiere two large-scale works at the Frost School of Music at the University of Miami.

“A former student of mine, Greg Simon, texted me and that’s how I found out,” Pann says. “After that it was just a domino effect … former students started texting me and emails and tweets started rolling in.

“[Actress] Mia Farrow even retweeted a tweet that mentioned it.”

Pann says he was especially thrilled with the news considering the piece he submitted. “The Mechanics: Six from the Shop Floor” is a saxophone quartet—not the usual Pulitzer fare.

“The Pulitzer is generally considered an orchestral or opera prize. This wasn’t my first time submitting, and this piece was a total shot in the dark,” he explains. “It was totally unexpected.”

Perhaps what gave “The Mechanics” the edge, Pann suspects, was this particular recording, done with the Capitol Quartet, “The first time I heard them during a concert in Grusin five years ago, I knew I wanted to write a piece for them,” Pann recalls.

“I was so inspired by them that I found myself practically beating down the door to the green room after the concert, telling them I wanted to compose something for them.”

The piece was written over the course of one intense month. Pann was in residence at the MacDowell Colony, a New Hampshire retreat for composers and other artists looking for a place to work free of distraction.

In his program notes, Pann explains that while writing the piece, he pictured the four members of the quartet dressed as old-fashioned auto mechanics, faces smudged with grease, performing in his brother’s taxicab stand and auto shop. Each movement brings to mind the clacking of a body shop and the churning, forward motion of an automobile.

Writing “The Mechanics” was a special experience given the unique source material and the concentrated time Pann could devote to the task. “I had never written a piece for saxophone quartet before. But I don’t think this will be my last. I’m absolutely in love with this ensemble.”

Though he didn’t win the prize, Pann says the encouraging and supportive response of his colleagues at the College of Music has made him feel as if he did.

Composition chair Daniel Kellogg says the department is thrilled. "This is a small and highly selective list. This confirms Carter’s talent as a great composer. At the College of Music, he is also valued as an excellent teacher and esteemed colleague."

And Pann says the honor of being among the finalists is recognition enough.

“While there’s no cash prize for finalists, your name and your piece are often mentioned along with the winner," Pann says. “The Pulitzer name ensconces the name of the composer forever. It’s really an honor to be named in that discussion.”

The winner of the 2016 Pulitzer Prize in Music is jazz composer Henry Threadgill for “In for a Penny, In for a Pound.” The other finalist is Timo Andres for his piece, “The Blind Banister.” For more information, visit the Pulitzer Prize website.

It was a busy fall for the American Music Research Center (AMRC)! One of the... END_OF_DOCUMENT_TOKEN_TO_BE_REPLACED

Friends, My heart is heavy. Associate Professor of Violin Charles (Chas) Wetherbee passed away on... END_OF_DOCUMENT_TOKEN_TO_BE_REPLACED

Longtime Associate Professor of Saxophone Tom Myer retired in May. As the year draws to a close, enjoy his insightful career reflections and advice … and discover what he’s up to now! END_OF_DOCUMENT_TOKEN_TO_BE_REPLACED
Return to the top of the page