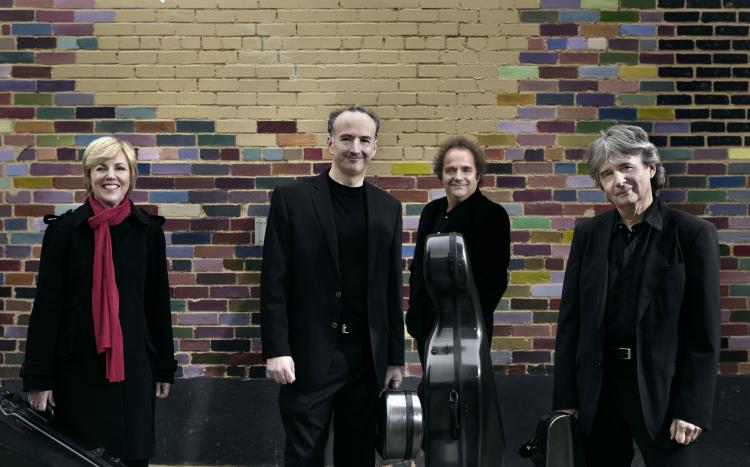 “It’s always exciting to be nominated for a Grammy, because your professional peers are the ones recognizing the recording,” says Edward Dusinberre, first violinist of the Takács. “In this case we played with such conviction because we felt an unusually strong connection to this powerful music.”

Dusinberre says that connection came from the quartet’s journey to record the pieces and the context in which Shostakovich composed them. The Takács recorded the disc in May 2014 at a recording facility in the Wye Valley, on the border of England and Wales. It’s a pastoral getaway, free from distractions, and is a welcome escape for the quartet, which spends much of the year on the road.

The pristine and perfect circumstances hit an odd snag early on in the recording. “Marc-André mysteriously threw out his back as soon as he arrived,” Dusinberre explains. “He was unable to get out of bed until the manager of the hotel came up with a painkiller solution.”

It worked, and the quartet wheeled Hamelin to the studio on a desk chair—where he proceeded to perform brilliantly. “Sometimes the best music making comes when you’re up against it. When we received the nomination, it made me smile because I remembered the adversity we faced to record these pieces.

“When you have to dig really deep, you find something extra, and you can hear that in Marc-André’s performance.”

The album features some of Shostakovich’s World War II era work. The first piece, String Quartet No. 2 in A Major, Op. 68, was composed in 1944. “It’s an immensely sorrowful piece—an elegy for the death and loss of that period,” Dusinberre explains. “The final movement begins with a plaintive melody that passes from the viola to the other instruments. It’s a very melancholy statement.”

The second piece on the disc, the Piano Quintet in G minor, Op. 57, was written in 1940 and, by contrast, ends with a sigh of relief. “It begins very dark and intense, but the third movement is lively and almost manic in its intensity. In the last movement, the music reaches a place of contentment, and it’s kind of like Shostakovich was walking off into the sunshine. Or is it too good to be true? There is perhaps ambiguity in the carefree nature of the ending.

“What makes this coupling work so well is the range of emotions,” Dusinberre says.

The Takács, a Hungary-founded group known well for playing Hungary-born composer Béla Bartók, hasn’t always had Shostakovich in its repertoire. “That’s why I think we’ve had success with this recording,” Dusinberre says. “It’s a project we cared a lot about because coming to Shostakovich’s music has been a process for us.

“We thought very deeply about it and only arrived here because we realized there was something special to communicate in his music.”

Also a credit to the album, Dusinberre says, are Andrew Keener and Simon Eadon, the producer and sound engineer with whom the quartet has been working for about 15 years. “Their musicianship, their ears and the atmosphere they create are big factors. They should get the nomination, too.”

While the Takács are no strangers to award nominations, neither are the other faculty members at the College of Music. Indeed, Assistant Professor of Voice Abigail Nims is also nominated for a Grammy as part of Boston Baroque's recording of Claudio Monteverdi’s “Il Ritorno d'Ulisse in Patria.”

Dusinberre says as he and his colleagues continue to pursue their passions as musicians, it sets an example for their students. “It’s good for them to realize that those of us who are happiest are exploring the things that mean the most to us as musicians. I hope that when they see us nominated and rewarded, it’s encouragement to find what matters most to them.

The nomination comes at a busy time for the Takács: the group just wrapped up a tour of a world premiere piece, commissioned by Carnegie Hall and Baltimore’s Shriver Hall. And Dusinberre just published his first book, “Beethoven for a Later Age: The Journey of a String Quartet.”

The book delves into Beethoven’s string quartets, comparing the pieces themselves, the musicians who first played them and the audiences who first heard them to the current music world. Dusinberre says it features the CU-Boulder campus and the Takács Quartet’s time here prominently.

He says it took about six years to write. “I knew it would be a long haul, but the rhythm of writing a book is totally different from preparing a piece of music, too,” Dusinberre explains. “As musicians recreating a score, we don’t have anything to revise except our interpretation because the notes are already in place. When writing a book, there are some great days, but there are some rough days, too. And the revision process is very involved. Fortunately I’m surrounded by academics in my family, who were there to give me a lot of encouragement.”

The book will be on some bookshelves in England before Christmas, with a wide release in the United Kingdom in January and in the United States in May.

Curiosity drives Lydia Wagenknecht, a PhD candidate in ethnomusicology and recent recipient of a Fulbright Research Award. “I care that my research will help us understand something in a more broad-based way that we didn’t understand before,” she says. END_OF_DOCUMENT_TOKEN_TO_BE_REPLACED

We’re so excited to welcome alumnus Damani Phillips back to campus this week and to present him the College of Music’s 2022 Distinguished Alumnus Award at our commencement ceremony on May 5! “The versatile training provided by CU has been the cornerstone of my success to date, and has enabled me to do and be many things well beyond typical expectations,” he says. Meet Phillips and discover his powerful advice to graduating Music Buffs. END_OF_DOCUMENT_TOKEN_TO_BE_REPLACED

On May 5, we look forward to welcoming back Judith Glyde, formerly professor of cello and chamber music at the College of Music and chair of our string faculty. Since retiring in 2014 to live in New York City, the professor emerita she has been active with the college’s alumni community there, offering tremendous support to Forever Buffs who are now living and working in the city. END_OF_DOCUMENT_TOKEN_TO_BE_REPLACED
Return to the top of the page