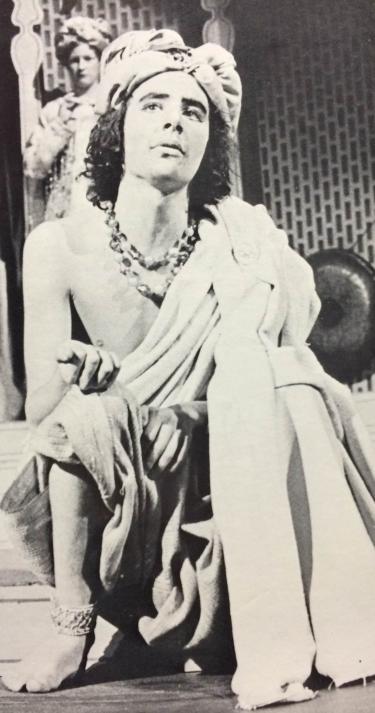 Librettist Mark Campbell knows CU well. In 1974, he played a lead role here in The Vision of Vasavadatta as a Theatre & Dance student.

It’s not every day you get to work with a Pulitzer Prize-winning librettist as a college student.

It’s even less often that you share the same alma mater.

When the sixth season of the CU New Opera Workshop, or CU NOW, kicks off this month, one of the opera professionals mentoring composition students knows Boulder well. Mark Campbell, a 1975 graduate of the Department of Theatre and Dance, is coming back to campus for the first time in 40 years.

“I am absolutely thrilled to be returning to Boulder,” says Campbell. “I’m especially eager to work with everyone at the Eklund Opera Program and see how Boulder has changed since I left.”

Campbell and composer Zach Redler will work with CU voice and composition students on their new opera, A Song for Susan Smith. It’s based on the 1994 case of a South Carolina mother who drowned her sons, then told police they were abducted, and later confessed to committing the murder. She’s currently serving two life sentences.

Campbell says the public response to the tragedy made it an ideal opera. “The story just felt instantly operatic to me. But it was only as I kept reading about [Susan Smith] that I began to feel sympathy for her, and you can't write anyone unless you feel some level of sympathy for them. Even the most villainous characters.”

The composer, Redler, says it was that ability to come at the story with understanding that made Campbell's libretto exciting to help put to music. "It speaks to how quick we are to judge and punish—hopefully rightfully so—but most times without understanding the why and, more importantly, how we can possibly prevent future tragedies," Redler says.

The technical qualities, Campbell says, make A Song for Susan Smith an ideal opera to workshop at CU NOW. “There are moments in it that need to be tested with real singers and Zach and I can make adjustments about the clarity of the storytelling and pacing.”

For someone who’s relatively new to opera—he only started producing pieces in 2002—Campbell has made quick work of elevating the status of new works in the opera world. He’s been commissioned to write 14 operas by some of the top companies in the U.S. And he’s spent his time mentoring young writers with American Opera Projects, the American Opera Initiative and the American Lyric Theatre.

“It only makes sense that CU NOW and I would come together. This development program is gaining a national reputation for creating new work,” Campbell says. “I feel really honored to be a part of it.”

Chair of the CU Theatre and Dance department, Bud Coleman, will direct this year’s performances. It’s one of several collaborations between the College of Music and Theatre and Dance that he’s helped spur. “I’m thrilled to work again with colleagues and students in the College of Music,” says Coleman. “We are all enriched by working in different facets of the performing arts.”

Silent Night, an opera Campbell wrote with composer Kevin Puts, received the 2012 Pulitzer Prize in Music. Based on the 2005 film Joyeux Noël, the opera takes place during Christmas 1914 in World War I Europe. He says his time working with various groups at CU laid the foundation for a writing style with more depth and diversity.

“There was a program in the Theatre and Dance department that was established to promote diverse ideas and cultures,” Campbell explains. “I think that exposed me to many different kinds of theater and nurtured eclecticism in my own work.”

Similarly, Campbell says programs like CU NOW are nurturing careers that will even take opera to the next level. “These workshops train our future composers and librettists on how to tell stories passionately and adroitly through music and text. They ensure that opera will have a future.”

The CU New Opera Workshop kicks off with rehearsals on May 26, with works being performed June 12-14. For information about the students and the professionals involved, visit the CU NOW page.

Curiosity drives Lydia Wagenknecht, a PhD candidate in ethnomusicology and recent recipient of a Fulbright Research Award. “I care that my research will help us understand something in a more broad-based way that we didn’t understand before,” she says. END_OF_DOCUMENT_TOKEN_TO_BE_REPLACED

We’re so excited to welcome alumnus Damani Phillips back to campus this week and to present him the College of Music’s 2022 Distinguished Alumnus Award at our commencement ceremony on May 5! “The versatile training provided by CU has been the cornerstone of my success to date, and has enabled me to do and be many things well beyond typical expectations,” he says. Meet Phillips and discover his powerful advice to graduating Music Buffs. END_OF_DOCUMENT_TOKEN_TO_BE_REPLACED

On May 5, we look forward to welcoming back Judith Glyde, formerly professor of cello and chamber music at the College of Music and chair of our string faculty. Since retiring in 2014 to live in New York City, the professor emerita she has been active with the college’s alumni community there, offering tremendous support to Forever Buffs who are now living and working in the city. END_OF_DOCUMENT_TOKEN_TO_BE_REPLACED
Return to the top of the page