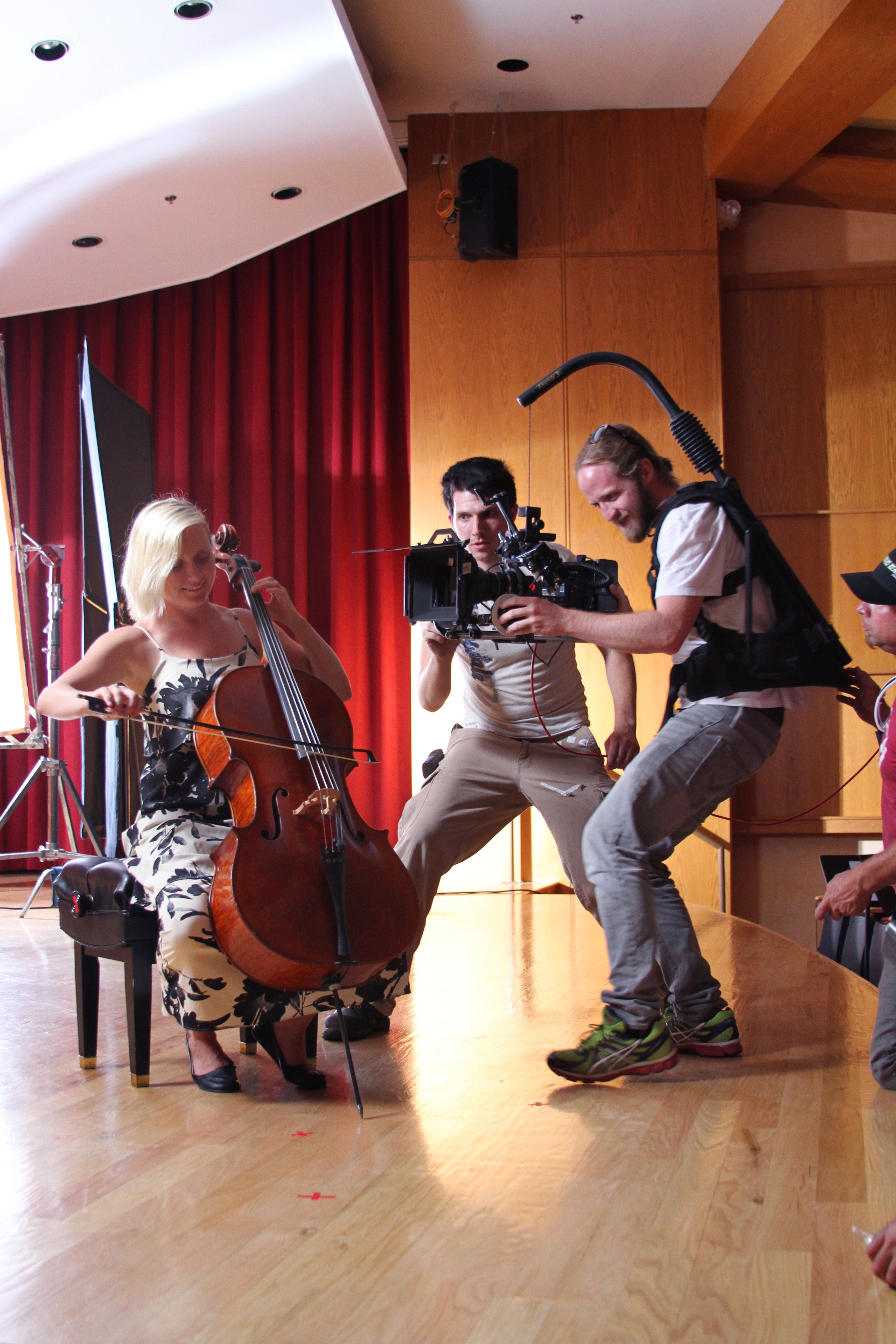 Megan Knapp, left, plays the cello while Pablo Barron, director of photography for Futuristic films — and a CU-Boulder graduate — and Assistant Cameraman Aaron Dupry film her for an upcoming Pac-12 TV advertisement promoting the university. The spot will air during televised CU football and basketball games. Photo by Clay Evans.

When the Colorado Buffaloes catch a breather during Pac-12 network football games this fall — ditto for the basketball team, right into spring — expect to see a top-notch team from the CU-Boulder College of Music step in.

For the first time, students from the college will be featured in nationally broadcast television commercials promoting the university, the campus and the CU-Boulder brand, focusing on a theme of “Create Something Extraordinary.” The commercials will air at least once during all games televised by the network.

“The message is if you come here, your education and experience are going to prepare you to truly create something extraordinary with your life,” says T.J. Rhine of Boulder-based Greenhouse Partners, which crafted the concept.

The commercials feature an inspirational voiceover and images illustrating the diversity of experience and excellence on campus, from Nobel Prize-winning faculty to musicians from the college. Two composition graduate students, Daniel Brandt and Hugh Lobel, wrote the score.

“We were sort of more interested in commercial music a bit more than other students,” says Brandt, 25, in the master’s degree program in composition. “We spoke with T.J. and got the impression he wanted something minimalistic.”

For research, Brandt went online and listened to musical scores for iPod and iPhone advertisements — “Then I stopped listening and started writing.” Rhine liked one of the tunes and Brandt worked with him to refine it. His score will accompany one version of the 30-second commercial and Lobel’s the other.

“They worked really hard to get the performance down to exactly 30 seconds,” says Daniel Kellogg, associate professor of composition, who coordinated the college’s participation in the project.

Having the potential of millions of ears hearing his work is, Brandt says, “pretty cool. … You go to a new-music concert and hopefully the people are nice enough to applaud. … Now it’s interesting think that millions of people may be watching or listening during a football game and I wouldn’t even know.”

Making a half-minute commercial takes a lot more time and effort than many people might imagine.

The four performers — Marisa Ishikawa on violin, Trevor Martin and Megan Knapp on cello, and Peter Mathys on piano — spent several hours in makeup and playing onstage at Grusin Music Hall on July 18 while a dozen people from Denver-based Futuristic Productions arranged complex lighting and shot video. The performers had previously recorded the original scores and were given instructions for the filming.

“The crew wanted them to play something they could play straight for 10 minutes,” says Kellogg.

Pachelbel’s “Canon in D” it was, then. The performers played those notes over and over while the crew tinkered with lighting, shot footage from the seats and eventually captured close-ups with a camera on a shoulder-carried boom.

“This was a fun chance for our students to collaborate on some music for a film and do something completely different,” he says. “They worked hard on an unusual project that will really represent the College of Music well.”

Assistant Professor of Composition Annika Socolofsky blends the realms of art and science through the Instrument Design Lab (IDL). The course offers a science-based context to instrumentation, sound and musical creation, giving College of Music students a foundation in the science of music. END_OF_DOCUMENT_TOKEN_TO_BE_REPLACED

It was a busy fall for the American Music Research Center (AMRC)! One of the... END_OF_DOCUMENT_TOKEN_TO_BE_REPLACED

Friends, My heart is heavy. Associate Professor of Violin Charles (Chas) Wetherbee passed away on... END_OF_DOCUMENT_TOKEN_TO_BE_REPLACED
Return to the top of the page