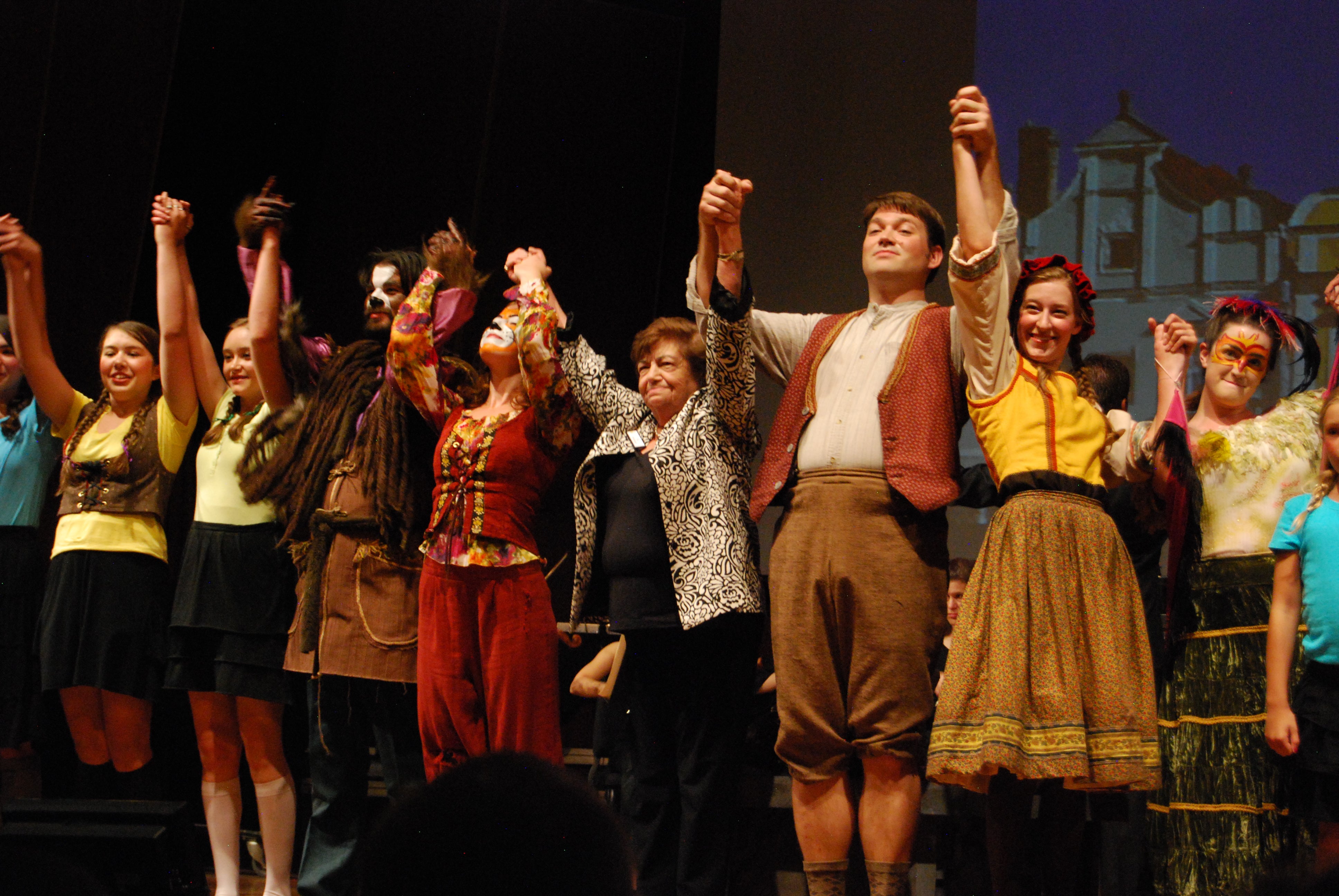 CU Opera provided the student vocalists for the lead roles in the Colorado Music Festival’s presentation of Hans Krasa’s “Brundibar” June 28-29, 2012. Jessi Goebel and Lukas Graf played the young heroes, Anniku and Pepicek, in search of milk for their ailing mother. Malcolm Ulbrick, as the villain Brundibar, received a chorus of boos from the audience each night; his character was clearly identified with Hitler, as a bully who kept families from living in peace together.  Other CU students included Kenneth Donahue and  Max Hosmer, and a trio of charming animals played by Chelsea Lewis (Sparrow), Adam Ewing (Dog), and Anna Englander (Cat).  The performance also incorporated a children’s choir, made up of singers from local church and community ensembles. The children added a sweet, eager joy to the performances, and their voices evoked the original production, which was sung by children inthe Terezin concentration camp.

One of the original performers from that time, Ela Weissberger, is the sole living survivor of those productions and was a guest of the Colorado Music Festival for the week. She spoke of her experiences in the concentration camp in rehearsals and at performances. Her inspiring, touching story of survival was incredibly moving for the cast and for CMFaudiences. Stage director Leigh Holman said, ” I will be forever inspired by the story and the tremendous spirit of Ela Weissberger. The students at CU have told me that they were transformed by meeting her– I know I was.”

The small orchestra, led by conductor Michael Christie, filled the back half of the Chautauqua stage, while a simple set and staging put the vocalists and the story in the foreground. Holman said: “What a thrill it was to collaborate with the Colorado Music Festival on Krasa’s opera, Brundibar! The cast, the musicians and all the people behind the scenes pulling this together truly understood the magnitude of the piece we were putting forth.” The semi-staged performance was part of CMF’s Rediscovered Masters series, a series of performances celebrating Jewish composers and their music, with an emphasis on music composed before, during, and immediately after World War II. The music of many Jewish composers was suppressed during the Holocaust period, and a great deal of their work was subsequently forgotten. Music Director Michael Christie is committed to resurrecting these lost treasures and celebrating these artists’ rightful places in musical history.

A new member of the College of Music faculty shares his approach to preparing students to become universal musicians, and fostering an environment of diversity and inclusivity. “It's not about hyper-specialization, but about flexibility, creativity and keeping an open mind,” he says. END_OF_DOCUMENT_TOKEN_TO_BE_REPLACED
Return to the top of the page