Articulations of human rights and animal rights have insufficiently engaged the dire challenges of biodiversity loss, species extinction, and climate change. Instead of situating environmentalism and animal advocacy in the language of liberalism through rights-bearing citizens and wards, this paper argues for a broader sense of justice, one that recognizes the shared plight of human and animal subjects while also critiquing the material conditions of ongoing colonialism. This paper draws from ethnographic research in Sarawak (present-day Malaysia) and preliminary research in South Africa to compare the welfare of displaced orangutans on Borneo, ex-circus lions in southern Africa, and the people who work to enable the survival of such critically endangered and vulnerable lives. Juno Salazar Parreñas is an anthropologist and assistant professor of Women's, Gender, and Sexuality Studies at The Ohio State University. She is author of Decolonizing Extinction (Duke University Press, 2018), and editor of Gender: Animals (Macmillan Reference USA, 2017). 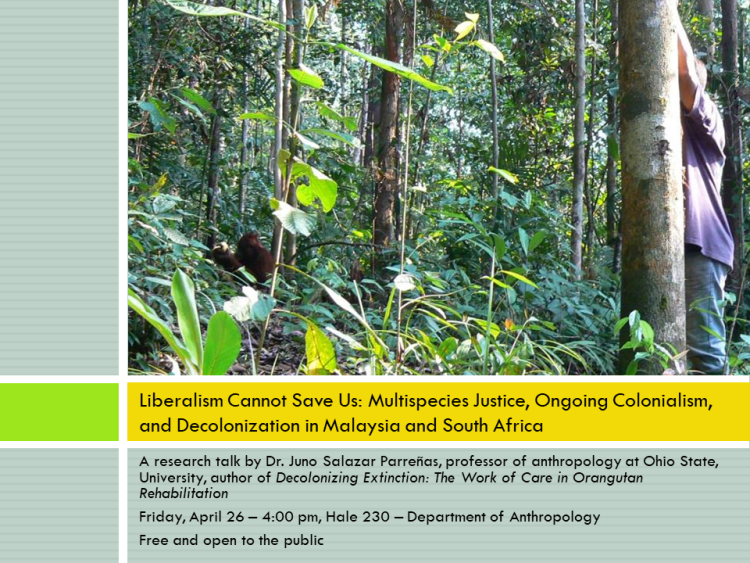 How does scolding reveal ethical worlds? How are differing shades of critique—from corrective training, to moral critique, to outright scolding—distinguished from one another? How do social actors determine whether critique reflects not the allegedly abhorrent behavior of the criticized but the faults of the critic him/herself?

In this presentation, I examine the implications of the form and performance of scolding in the ethical lives of Ache hunter-gatherers of Eastern Paraguay. In contrast to deontological ethics, which makes a rigorous distinction between act and actor (so as to sanction objectionable behavior while respecting the person’s abstract dignity), Ache scolding draws from the competing assumption that in some basic sense, we are what we do.

Free and open to the public. Hosted by the Department of Anthropology, University of Colorado Boulder. For more information, contact Carla Jones, carla.jones@colorado.edu 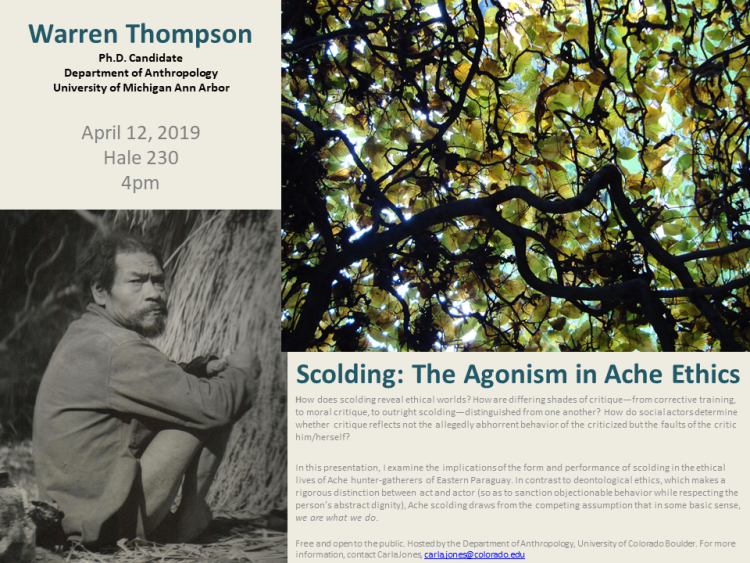 What value do biocultural frameworks have for understanding human biology and variation in health? In this talk, I will draw on my research in the Brazilian Amazon and in Nicaragua to explore this question. I will discuss how I have employed mixed methods, including ethnographic data, to advance understanding of women’s reproductive strategies in the Brazilian Amazon, evaluate the effectiveness of the world’s largest conditional cash transfer program in building human capital among Amazonian children and to explore the implications of food insecurity on maternal mental health in Nicaragua. In a time of renewed appreciation for the interconnectedness of nature and nurture, holistic anthropological perspectives are increasingly relevant for understanding and addressing disparities in human health. 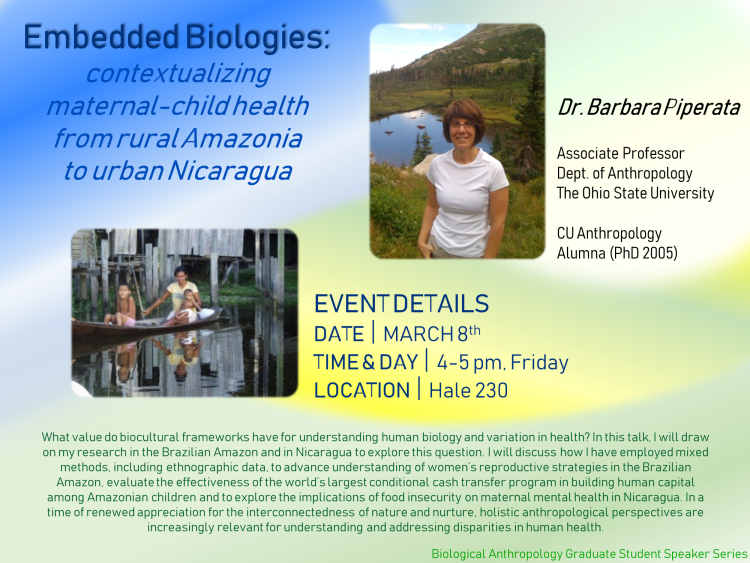 ABSTRACT:
A hallmark of modern bioarchaeology is its commitment to a holistic and theoretical approach. The biocultural synthesis has indelibly shaped bioarchaeological research and has challenged scholars to reconsider the ultimate causes of gendered health disparities, and to situate trauma, disease, mortality and morbidity data within broader social and political contexts. Culturally sanctioned violence often has gendered components to it in modern times, and bioarchaeological studies demonstrate that this was the case in the past as well. By integrating human skeletal remains, ecological data and contextual information regarding the social and political factors relevant to each case study, violence against women is seen as an institutionalized form of social control. Case studies presented can advance discussions of how politically motivated inequality causes subordination, pain and suffering, and how this in turn motivates various forms of resistance and agency in some cases and compliance in others.

ABSTRACT:
Archaeological and ethnographic accounts of violence in small scale societies represent a baseline for thinking about the ways that violence and masculinity became entwined social processes. Male violence (lethal and nonlethal) is associated with social spheres of power and influence and it is embedded within ideologies, histories and collective memories. Using fine-grained biocultural analyses that interrogate violence in a more nuanced way, histories and experiences of social violence can identify culturally-specific patterns of male violence in past and extant groups. Case studies presented here reveal that while violence can be chaotic and disruptive, it also can be a force for regeneration and social transformation. Using an interpretive (poetics) approach, focusing on the ritualized violence that males participate in provides rich insights into social processes governing the cultural logic that normalizes and institutionalizes male violence. 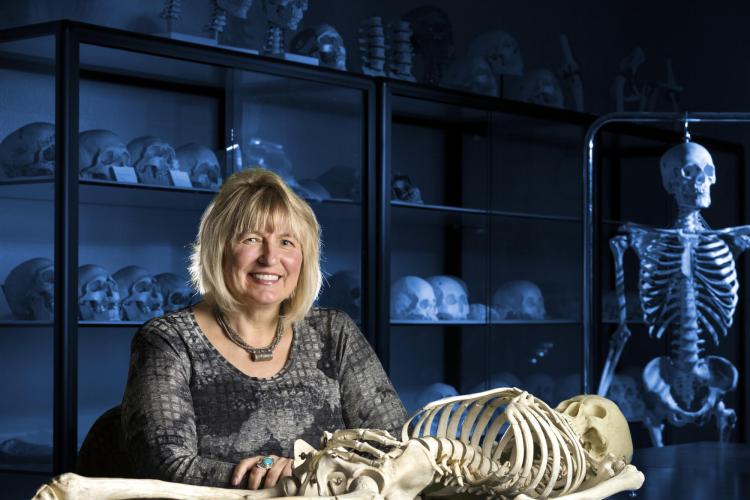 BIOGRAPHY:
Debra Martin received her PhD from UMass/Amherst under the mentorship of George Armelagos in 1983. She taught at Hampshire College until 2006 when she relocated to the University of Nevada/Las Vegas. Her teaching and research interests are centered on biocultural approaches to understanding violence in human groups. She received the UNLV Distinguished Professor award in 2017, the Harry J. Reid Silver State Distinguished Researcher Award in 2015, the Barrick Senior Distinguished Research Award in 2014 and the Lincy Professorship in Anthropology in 2012. She was awarded the American Anthropological Association/Oxford University Press Distinguished Teaching Award in 2014. Since 2006 she has published 11 books and 54 journal articles and book chapters, many of them co-authored or co-edited with her PhD students. New Directions in Biocultural Anthropology, co-edited with Molly Zuckerman, is an homage to George Armelagos with chapters authored by his many PhD students (2016, Wiley). Other books include Bodies and Lives, Health in Ancient America (2015, Routledge), Bioarchaeology of Women and Children in Times of War (2016, Springer), Broken Bones, Broken Bodies (2017, Lexington) and Massacres, Bioarchaeology and Forensic Anthropology Approaches (2018, UPF).

In The Beast and the Sovereign, the late Jacques Derrida asked a remarkable question: What if sovereignty and vulnerability went hand in hand?   What if the other others – the ones beyond the pale of citizenship and even humanity – were actually the rulers of the realm? Authority is only authority to the extent it demands recognition, as Derrida saw, a dynamic that undermines every claim to supreme and absolute power.  This dynamic can place the vulnerable in an unexpected position of power.  In this paper, I explore two very different episodes in which sovereignty of vulnerability becomes evident.  One comes from the archives of Dutch colonialism and the weapons demonstrations through which Dutch officials sought to extend the reach of the colonial state.  Instead of performances of potency, these demonstrations devolved into performances of vulnerability, with the most benighted inhabitants of the colonial Indies, the so-called Stone Age Papuans, appearing in the guise of sovereign power. The other comes from my new ethnographic work on speech therapy and the communities of sign use that emerge around non-verbal people.   Here as well, I consider scenes where the indicators of recognition are idiosyncratic and fleeting and the participants who seem to have the most power and authority turn out to have the least control over their signs.  The violence associated with claims to sovereignty may stem from the sovereignty of vulnerability – a possibility that could well leave us wondering whether sovereignty is ever what it seems.

Bio:
Danilyn Rutherford is President of the Wenner-Gren Foundation for Anthropological Research.  She's the author of three books: Raiding the Land of the Foreigners: The Limits of the Nation on an Indonesian Frontier, Laughing at Leviathan: Sovereignty and Audience in West Papua, and Living in the Stone Age: Reflections on the Origins of a Colonial Fantasy.  She's currently working on a project on belief and communication in the social worlds of severely disabled young adults in the United States. 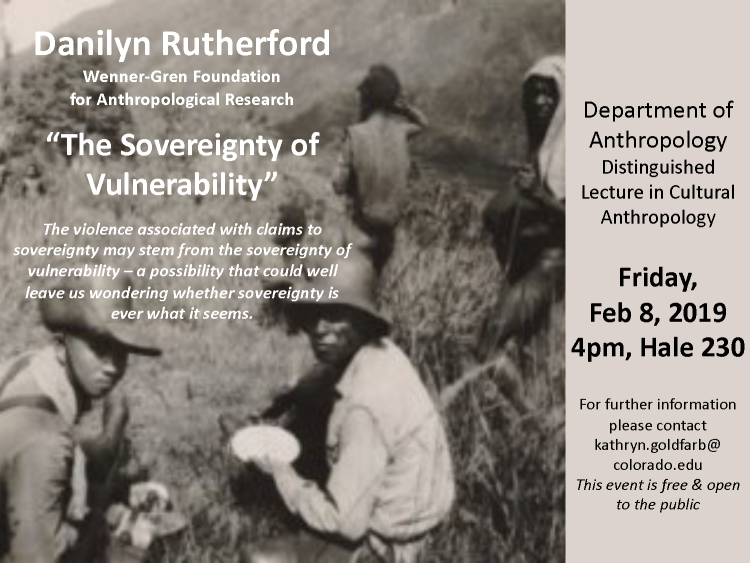 In this talk I will discuss several projects I have been involved with over the course of my graduate and postdoctoral training. I will discuss the use of genomic sequencing to examine population level genetic variation and the use of that data to identify signatures of recent natural selection. I will also discuss the use of large genomic datasets to examine germline and somatic variation, and how that variation can be used to address questions of population level disease risk and the discovery of genes that drive human malignancies. 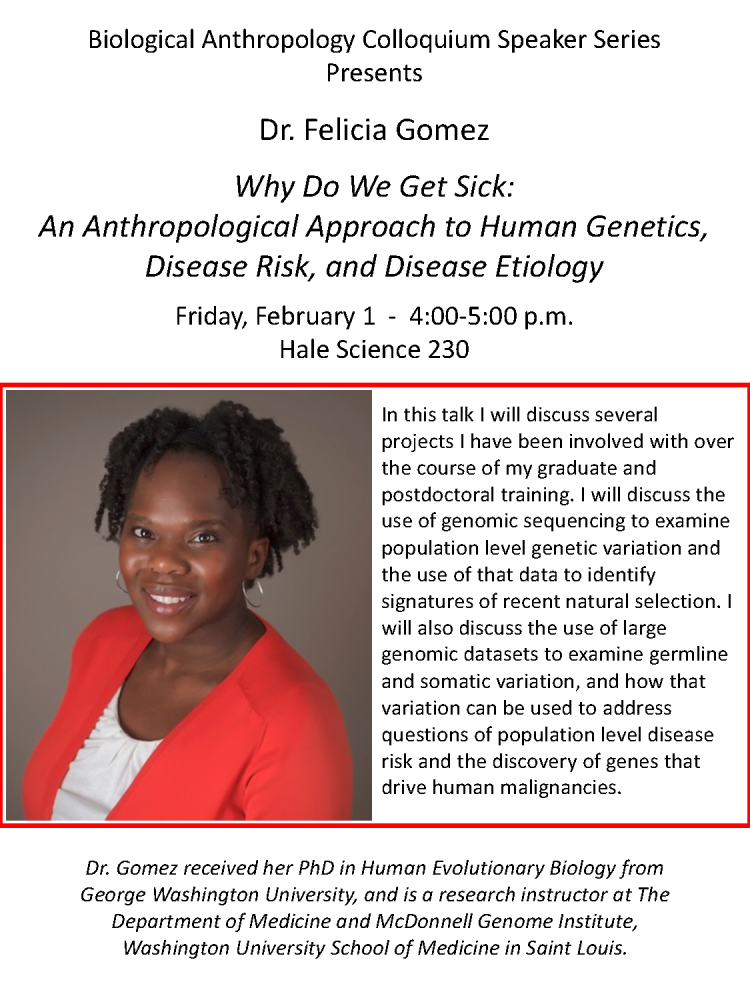