Abstract: For the last six decades a dedicated team of researchers in Siberia has been domesticating silver foxes to replay the evolution of the dog in real time. Lyudmila Trut has been lead scientist on this work since 1959, and together with biologist and historian of science, Lee Dugatkin, she tells the inside story of the science, politics, adventure and love behind it all. Like a set of Russian nesting dolls, How to Tame a Fox {and Build a Dog} opens up to reveal story after story, each embedded within the one that preceded it.  Inside this tale of path-breaking science in the midst of the often brutal -35° winters of Siberia is hidden a remarkable collaboration between an older, freethinking scientific genius and a trusting, but gutsy young woman. Together these two risked not just their careers, but to an extent their lives, to make scientific history. If you go one level deeper, you find yourself lost in the magical tale of how some hardscrabble but openhearted humans and the wild animals who they domesticated developed such deep attachments to each other that both seemed to forget the species divide between them. 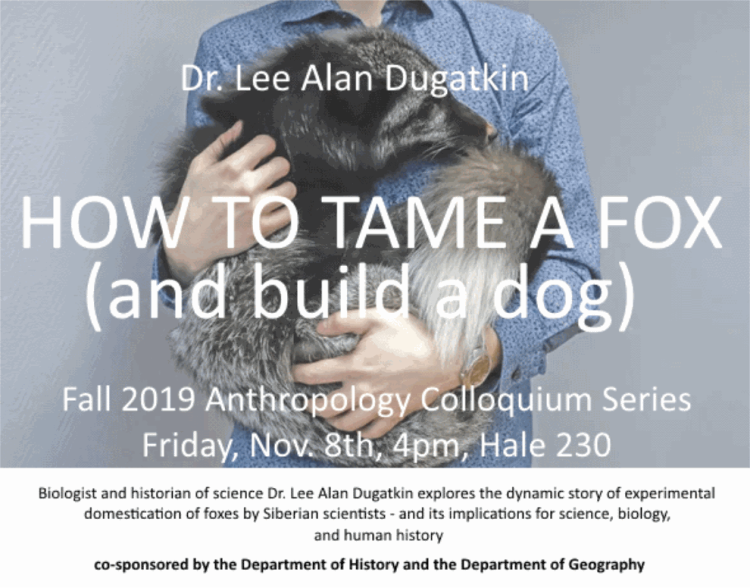 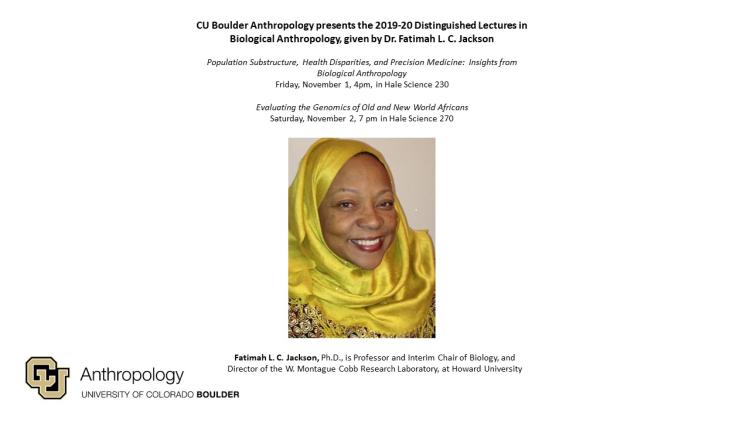 We write to warmly invite you join us in thinking about questions of liveliness beyond the human. We will be co-hosting an intimate workshop on Friday October 25 considering what it means to expand our conceptions of vitality and humanity. Life Revitalized will bring together leading scholars working at the intersection of feminist anthropology and science and technology studies (STS) to consider how human life is defined and valued in practice.

Invited presenters Andrea Ballestero (Rice University), Marisol de la Cadena (University of California Davis), and Mayanthi Fernando (University of California Santa Cruz) will share ethnographic work exploring human life as a category for organizing experience, a locus of moral or ethical concerns, and a standard against which other forms of life or non-life are measured. We invite participants to consider questions including: What is life, and how can it be acted upon? What forms of life are excluded or dignified? What does it mean to strive for a better life or to improve the lives of others? Does anthropology--long defined as the study of human life--offer ways to engage with lives and liveliness beyond the human? What are the methodological and disciplinary limits of these questions?

Join us as we engage the “politics of life itself” to ask how distinctive ways of knowing simultaneously afford or exclude access to particular lives and to life in the abstract.

Please register for the workshop using this link by October 21 so that we can plan to include you in the day.  For questions please contact Alison Cool, Carla Jones or Carole McGranahan. 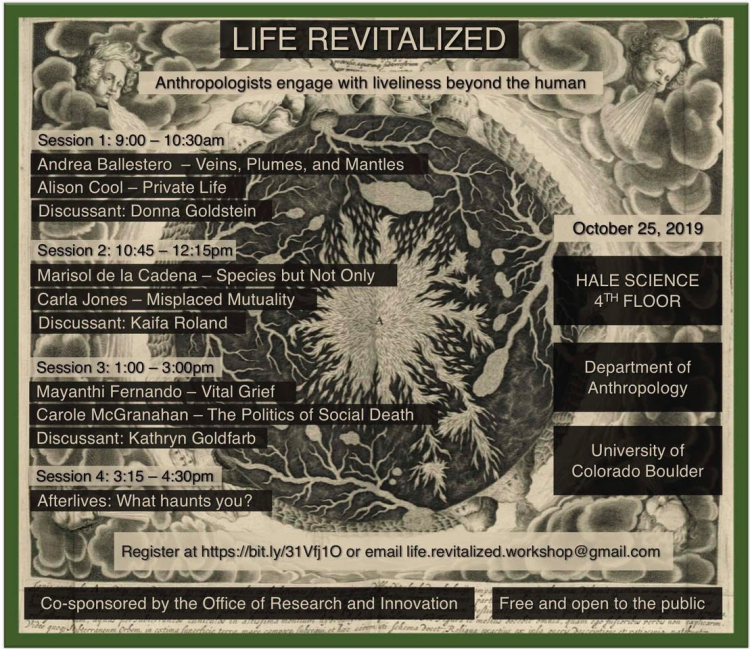 2019/20 Distinguished Lecture in Archaeology
Viewing the World from a Moche Mask: The Ontological Turn and the Fate of Meaning in Archaeology
Edward Swenson, Associate Professor, Department of Anthropology University of Toronto
4pm, Friday, September 27 in Hale 230

Ritual masks, defined as material objects that disguise, transform, and resignify the identity of its wearer, commonly serve as powerful agents in initiation rites, funerary rituals, theatrical displays, and reenactments of cosmogonic myths. In this lecture, an investigation of masquerade among the Moche of the North Coast of Peru (AD 200-800) reveals that masks acted as animated persons that extended and distributed the life-force (camay) of powerful wak’as (sacred beings). In particular, I examine the remains of broken ceramic masks recovered in feasting middens at the Moche ceremonial center of Huaca Colorada (AD 650-900)
in the southern Jequetepeque Valley of the North Coast of Peru to demonstrate that Moche masking traditions ritually materialized the ontological underpinnings of political and religious ideologies. The iconography of the masks suggests they were worn by officiants who reenacted stories of creation in rites that promoted agricultural bounty, life, and fertility. The discovery of mask fragments and musical instruments in middens containing a high quantity of face-neck jars used to decant corn beer further indicates that ritual specialists donned masks during feasting events staged on ceremonial platforms. The masked figures and their replicated ambassadors, materialized in numerous portable jars sporting prominent faces, acted as conduits of life-giving fluids that were festively circulated among celebrants gathered at the site. In the end, an analysis of Moche masks permits a critical assessment of archaeological interpretations of past ontological dispositions. 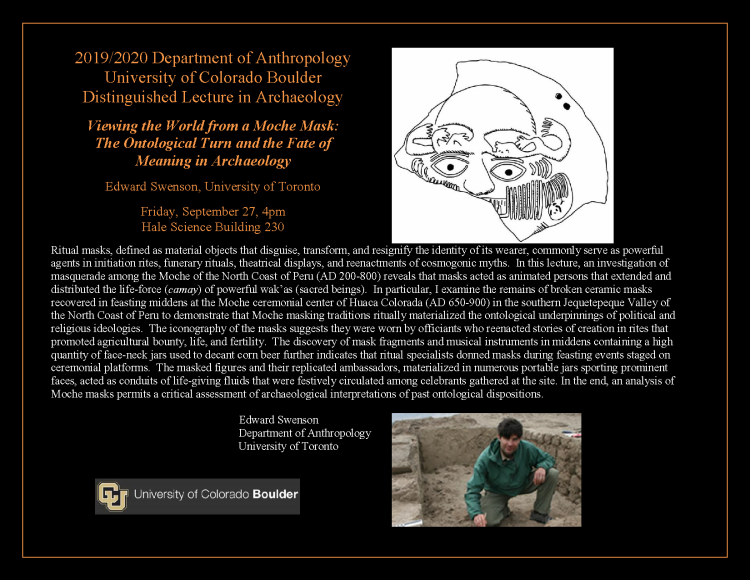 The Middle Horizon (AD 600-900) is associated with the florescence of the highland Wari Empire, and it coincided with widespread economic, political, and religious transformations throughout the Andes. Archaeological investigations of the Late Moche Period (AD 650-800) in the Jequetepeque Valley of northern Peru suggest that Wari expansion resulted in the reconstitution of gender ideologies as reflected in the ascendency of women ritual specialists and a new iconographic corpus celebrating a Moche goddess. The lecture presents results from recent archaeological research in the southern Jequetepeque Valley that sheds light on the role of Wari imperialism in reformulating gender-based political associations on the coast. I argue that novel architectural designs encoded a religious cosmology founded on gender complementarity that paired “male” highland polities with “female” societies on the coast. As documented at the time of the Spanish conquest, the alliance of highland and lowland communities was understood in terms of the union between male and female wak’as or sacred beings and their respective social groups. In fact, our recent research in Jequetepeque strongly suggests that the coast may have been religiously incorporated into the Wari Empire as the female counterpart to a male polity based in the mountains. In the end, the lecture provides a case-study of how archaeologists can investigate architectural remains to interpret the effects of imperial projects on everyday life and gender relations. 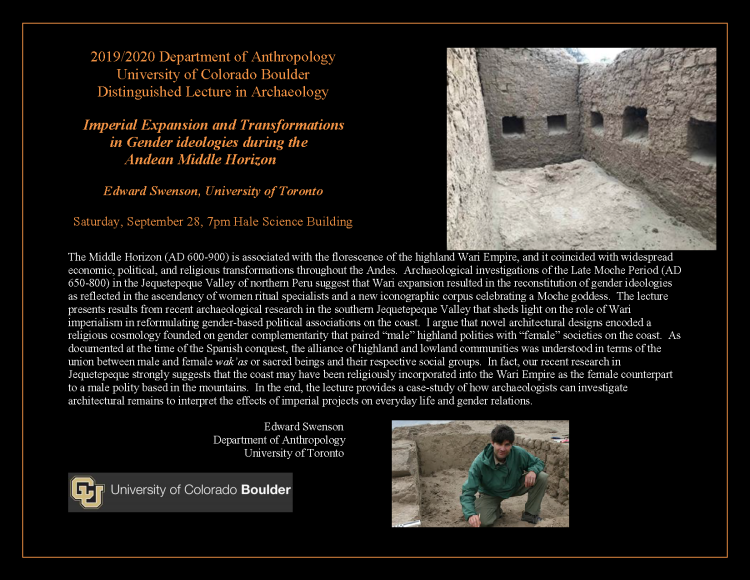