How do repeated disasters shape and strengthen communities? Rachel Egan, M.A. University of Colorado Boulder addresses this question in her free lecture:

When the Volcano Erupts: Lessons from the Archaeological Record on Human Adaptation to Catastrophic Environments

The Tilarán-Arenal region of Costa Rica is one of the most volcanically active regions in the world, but despite the risk, from the advent of sedentary villages during the Tronodora phase (2000-500 B.C.) until the arrival of Spanish in the 16th century, people demonstrated remarkable resilience. Using this region as a case study, Egan’s research uses archaeology, tephrochronology, and geographic information systems to explore the innovative ways pre-Hispanic people adapted to the hazardous nature of their environment. Lecture is free and open to the public. Seating is limited. Doors open at 6:30 PM. 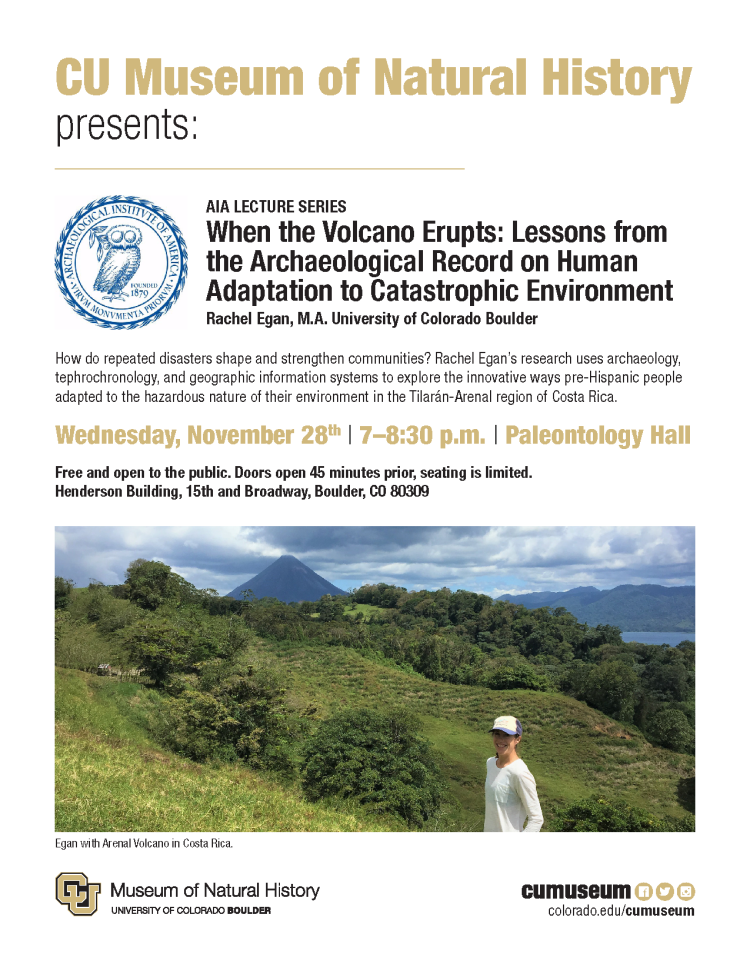 This talk investigates how nonnative forms of mental and emotional health care are implemented and transformed in Oaxaca, Mexico. I discuss how psy-globalization articulates with political economic projects and simultaneously creates therapeutic "sites of psysociality" for commenting upon and contesting such projects and their failures. In these sites, Oaxacans grapple with and seek to recover from the emotional consequences of social problems and breakdowns, such as familial conflict and loss, poverty, violence, and migration, which themselves are often intimately tied to the broader political economy and cultural changes in the context of globalization and modernization. 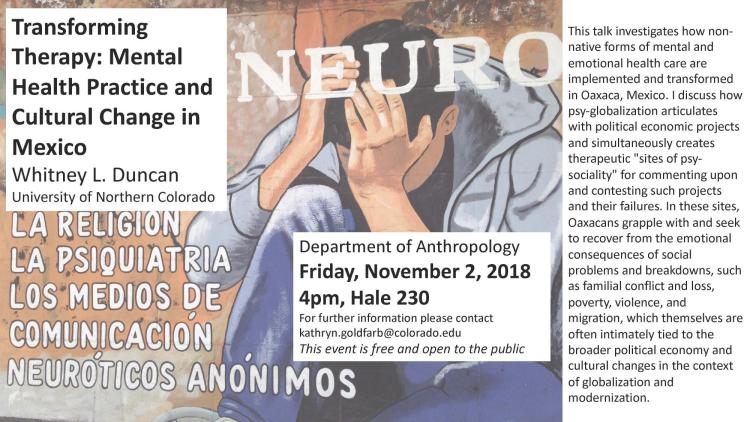 In recent years, Iceland has emerged as a hot spot for the international data storage industry. New data centers, cropping up along the coastlines, have been lauded as embodying the island's high­tech connectivity. However, cfose attention to data centers' making and maintenance raises the specter of another kind of connection: Iceland's integration in American military empire. In this talk, I show how data storage picks up on the infrastructures, spatlal orders, and affective stances established by a U.S. naval base built on the Reykjanes Peninsula in the Cold War. ln doing so, it repri$es the role of "infrastructural intermediary": a technical node in others' networks, at once left out and built in. This in­between position, I argue, has been key to both imperial and infrastructural expansion in the North Atlantic. It also allows us to unsettle the persistent tech no-utopian ideal of global connectivity. 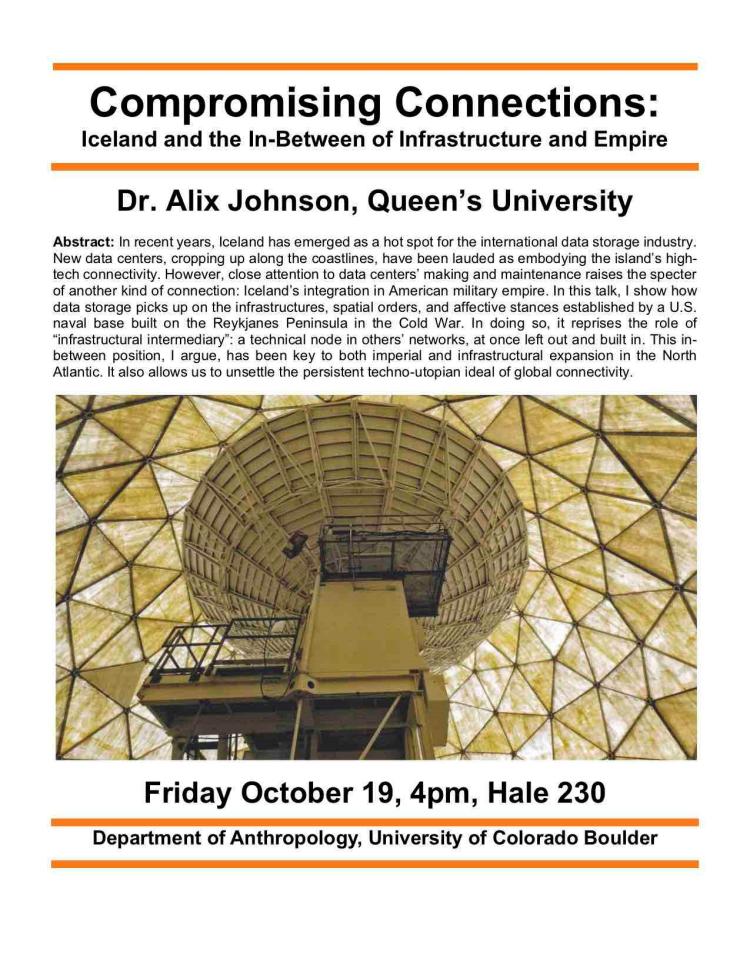 The Eagle Ford Shale in South Texas remains one of the most active shale gas reserves in the U.S. and one of the largest economic development projects in Texas. Development has meant different things for residents of the small, rural communities of the region. For one predominantly Mexican-American community, the shale gas boom renewed a conversation about local history, cultural identity, and resource future. The history of south Texas is a complex one of evolving political-economic systems—missionization, farming, ranching, hunting, and now energy. For Mexicans/Mexican Americans, much of this history is one of prejudice and poverty. After generations of economic and political hardship, communities in south Texas see the Eagle Ford Shale as an opportunity to develop, materially and non, in ways that have been historically inaccessible. This article seeks to assess how this cultural pursuit by south Texans intersects with the literature and how these residents navigate the intersection of cultural past and resource future.

(This quote was the closing line to a letter written in 1934 to George G. Heye of the Museum of the American Indian, requesting a sacred bundle be returned to the Hidatsa Waterbuster clan)

I am working on a manuscript (or series of papers?) about the Mandan Hidatsa Arikara Nation, thinking through the framework of “storywork from a resilient nation,” focusing on local narratives of history and their influence on local understandings of the contemporary moment. This is a chapter about historical and contemporary moments in repatriation for the Hidatsa, connecting repatriations in 1938 and 2013, and my recent discovery and return of a video of that 1938 repatriation. I am utilizing a more narrative writing style, like creative nonfiction—in other words, this is an experiment! It may work, it may not, and it is very much a work in progress. The paper is being coauthored with the tribal historian, this draft is an early step in an ongoing collaboration with him.

This paper explores the gender, race, and class politics of white nationalism in the Trump era. First, I detail the resurfacing of white nationalism in the Trump era, highlighting the cultural and political-economic context for its current rise. Second, I analyze gender politics in the alt-right. I explore three central precepts in alt-right gender ideology: a new biologism, a politics of degradation targeted at liberals, feminists, transgender people, and weak men, and a class politics that promises to restore economic prosperity for those who respect patriarchal gender norms and racial hierarchies. Ultimately, I argue that gender is more than just a site of inequality in alt-right thought and action. It is a part of a worldview that imagines gender equality and gender nonconformity as existential threats to the white race. The paper ends with a brief discussion of the ethical dilemmas we face as researchers investigating a group whose politics is dangerous, violent, and authoritarian. What are the ethics of studying a group that must be condemned as sexist, racist, anti-trans an authoritarian? And what ethical dilemmas do we face as we try to craft a scholarly response that is organized explicitly around the altright’s political defeat? 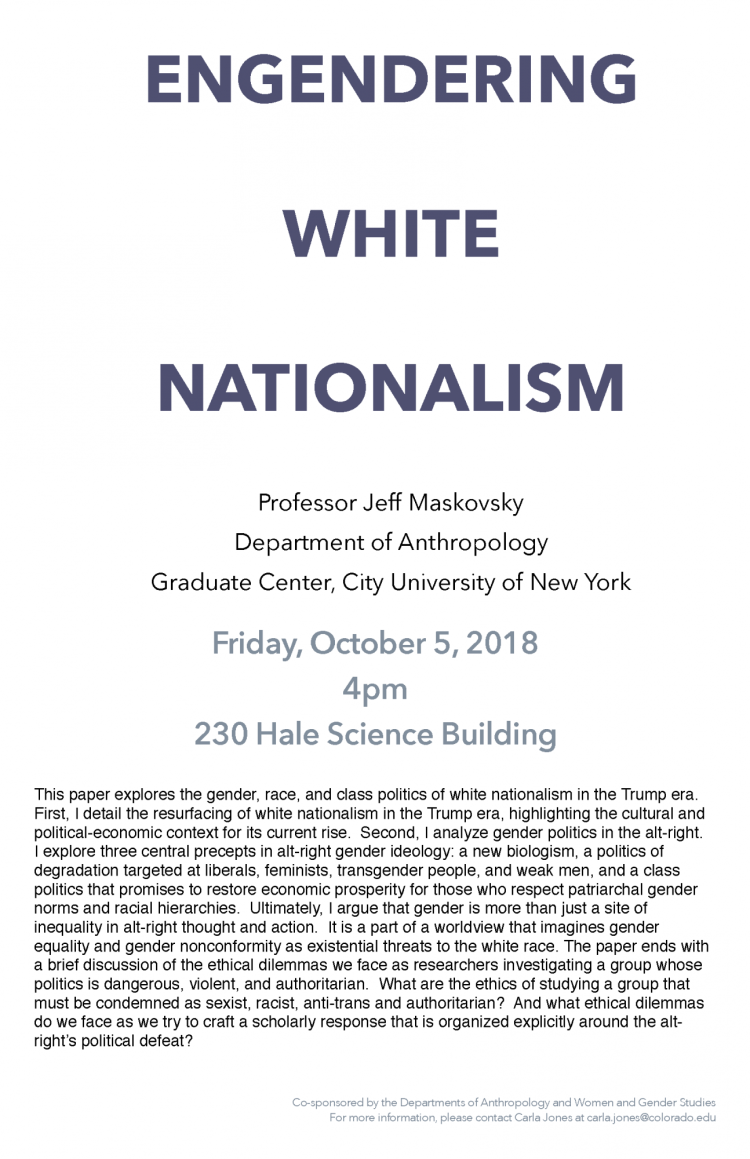 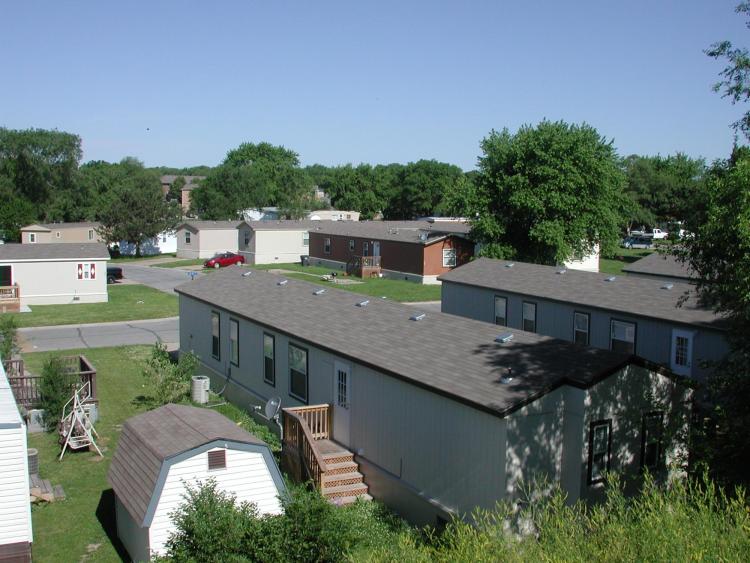 Abstract: How does the symbolic transference of material ruination onto mobile-homeowners produce impermanence, social precarity, and financial risk? Achieving the “American dream” of upward class mobility, self-actualization, and respect through hard work is, for most Americans, materialized through homeownership. As markers of social status however, not all homes are created equal. Advertised as the American dream “on a budget,” manufactured homes—also referred to as mobile homes or trailers—represent an economical alternative to conventional homeownership, and as such meet a critical demand for affordable family housing in the United States. However, as occupants of nontraditional housing, mobile-homeowners are denied the legal and financial benefits of homeownership due to widespread cultural disdain for “trailer trash.” Situated in post-recession Lincoln, Nebraska, a “recession winner” with the highest reported rates of resident happiness and wellbeing in the United States, this dissertation explores the everyday reproduction of housing precarity for urban mobile home community (MHC) residents threatened with displacement due to redevelopment and revitalization. Drawing on 28 months of ethnographic fieldwork conducted in five MHC neighborhoods, my research illustrates how housing form mediates social expectations for ruination and respectability. By considering the complexity of housing—as shelter, the symbolic realm of the domestic, or as a financial vehicle for upward mobility—this project analyzes the social costs of abjection and contested belonging in aesthetics, finances, and stigma mitigation techniques for an estimated six to eight million mobile-homeowners living in 40,000 MHCs nationwide.

Back to the Futures: A Conference on Anthropology and Time (2018)
Cultural anthropology graduate students, Anthropology Department, University of Colorado Boulder
Friday and Saturday, September 28 - 28 in Hale 450 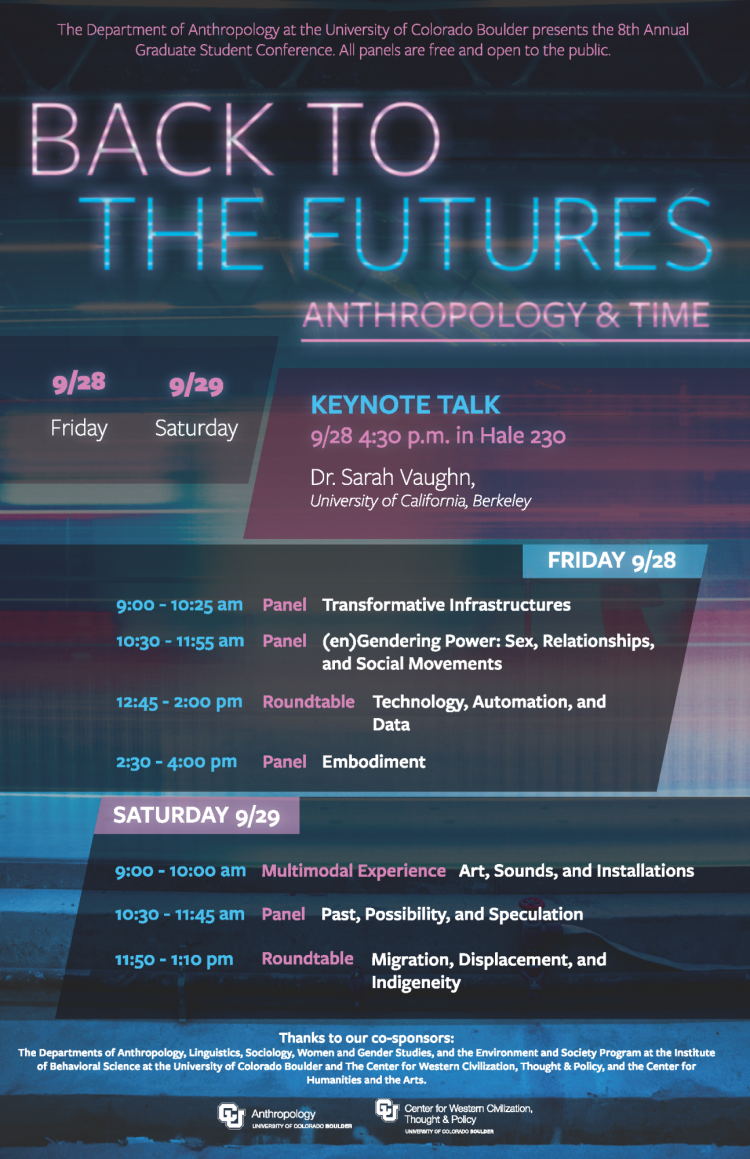 For postcolonial, low-lying nation-states that are acutely vulnerable to sea-level rise, sea defense is associated with the promises of decolonization, or the collective recognition of bounded territory with an independent nation-state. Building on a case study of Guyana’s sea defenses and related engineering expertise, I suggest that the boundaries of national territory and freedom were never a guarantee even with the end of colonial rule. Engineers’ claims to territory have always been in direct conflict with the aspirations of the liberal and emergent nation-state. As I will show, engineers have etched out a space of legitimacy through other ‘scalar-concepts’ of territory, such as the “developed/developing world” that work to mark who belongs to their epistemic community. The brunt of engineers’ inter-territorial claimmaking, not only offers an alternative genealogy of decolonization, but also allows for an assessment of the distorting effects of climate change on contemporary engineering discourses about territory. Engineers, in other words, are essential storytellers of the nation-state and its climatic futures. Beyond calling out the limitations of sovereign power, they make possible an interconnected world based in expertise and the recognition of vulnerability. 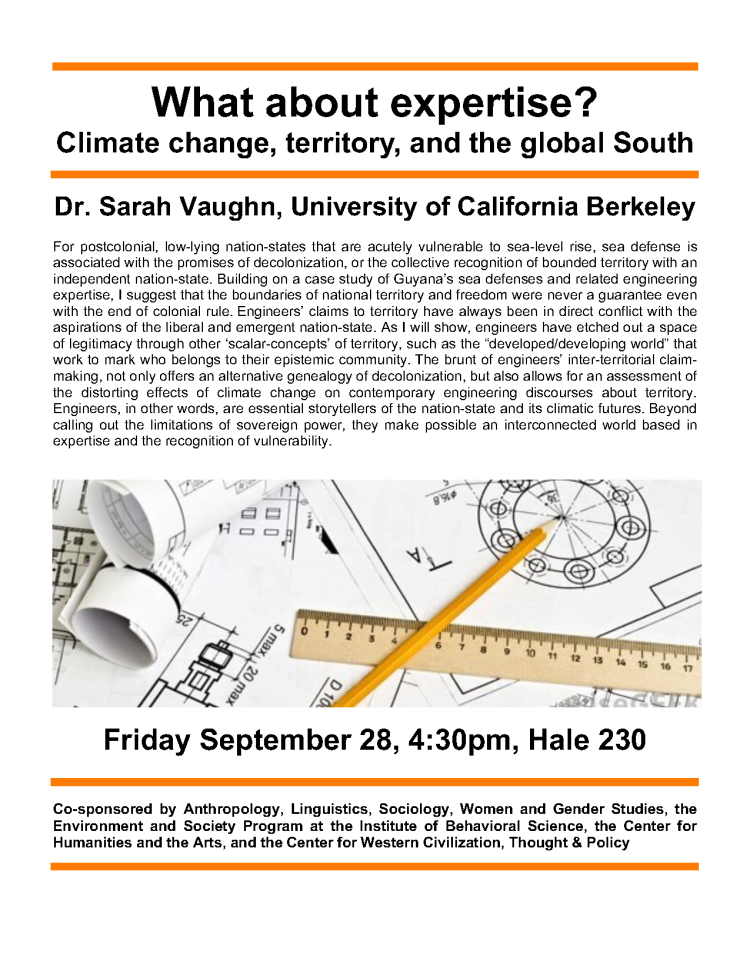 In the United States, death practices have been undergoing a rapid transformation in the last 15-20 years. Moves towards creative secular observance are accompanied by new material practices. I deploy ethnographic examples of three entrepreneurs who make objects from cremated human remains. This case study offers a provocation for object oriented ontology. The entities discussed here cannot be called either human or non-human. They are both. And they are designed to facilitate on ongoing relationship with the dead. I advocate for an asymmetrical archaeology that focuses on relationality – a situated agency that refuses binary logic and essentialism. These new entities are not exactly commodities, although they may be produced through similar means. Embraced primarily by agnostics and atheists, they are not exactly religious relics, although they contain preserved parts of the human body. They come closest to being a personal fetish, or a radically material type of ghost. 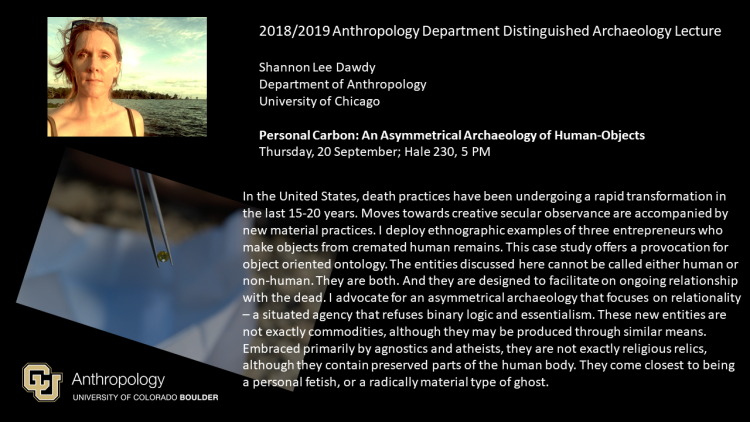 Why do people like old things -- antiques, heirlooms, outmoded ‘junk’, and historic houses? What roles do such objects play in our social worlds? The city of New Orleans offers a cluttered laboratory in which to explore such questions, even more so after Hurricane Katrina threated to wash away its historic character. New Orleans brands itself as an “antique city” and there have been many fights over preservation that embody its ongoing struggle to figure out how society is shaped by both positive and negative inheritances from the past. Many New Orleanians say old buildings are haunted, and are quick to share ghost stories. For some, these ghosts are harmless eccentrics. For others, they embody the trauma of slavery and the ongoing disaster of unbridled capitalism. The patina aesthetic helps people articulate a sense of community, but also express a critical nostalgia. 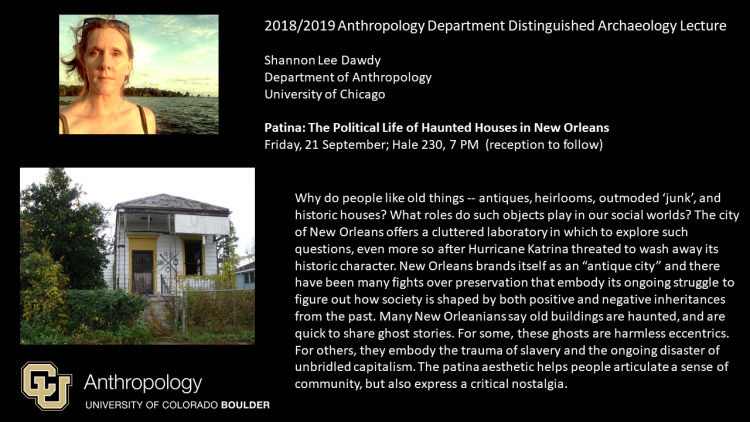 Abstract:
What is the role of masculine homosociality and postcolonial social exchange in the everyday life of French radical philosophers? What happens to intellectuals who cling to utopian values long after the decline of their once-revolutionary hopes? I take up these questions by a study of a university department outside Paris that was formed in the aftermath of massive French student protests and strikes in May-June 1968. The department in question initially harbored famous male philosophers such as Foucault, Deleuze, Lyotard and Rancière, but these “Great Men” are now long gone. The professors who remained, as one said to me, were “unrepentant utopians (though perhaps a little bit tired — or in any case getting old).” I sketch the parameters of everyday life in this site, situating it in a contemporary moment of postcolonial student exchange and neoliberal university reforms. I then develop an account of its dominant social subject, which I term a “disappointed utopian” subject, and I show how this subject belongs to a longer history of masculine domination and homosociality among French radical intellectuals.

Bio:
Dr. Eli Thorkelson is a cultural anthropologist and research affiliate at Stellenbosch University. He is currently editing Academography, a web project about critical ethnography of higher education, and finishing a book project, Disappointed Utopia: Radical philosophy in postcolonial France. His writing has focused on French activism, precarious labor, and reflexive anthropology. 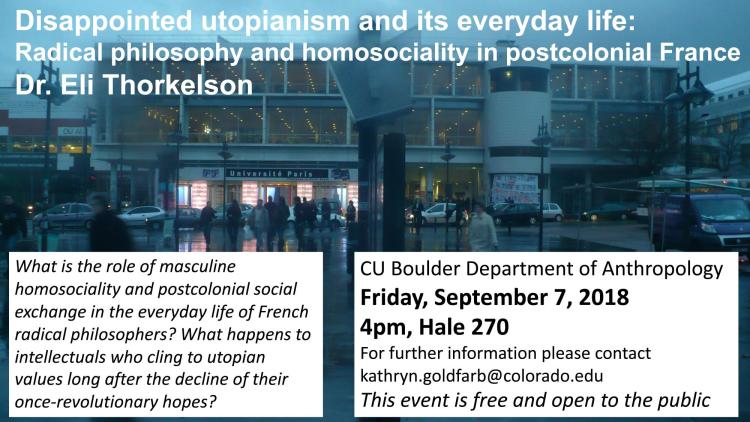