Oppidum cadaver: Assessing the Impact of Ancient Urbanism on Modern Europe and Beyond
November 15 at 7:00 pm in the CU Musuem.
Presented by John W. Hanson, a CU Research Associate, in partnership with the CU Museum and the Archaeological Institute of America. Free and open to the public. 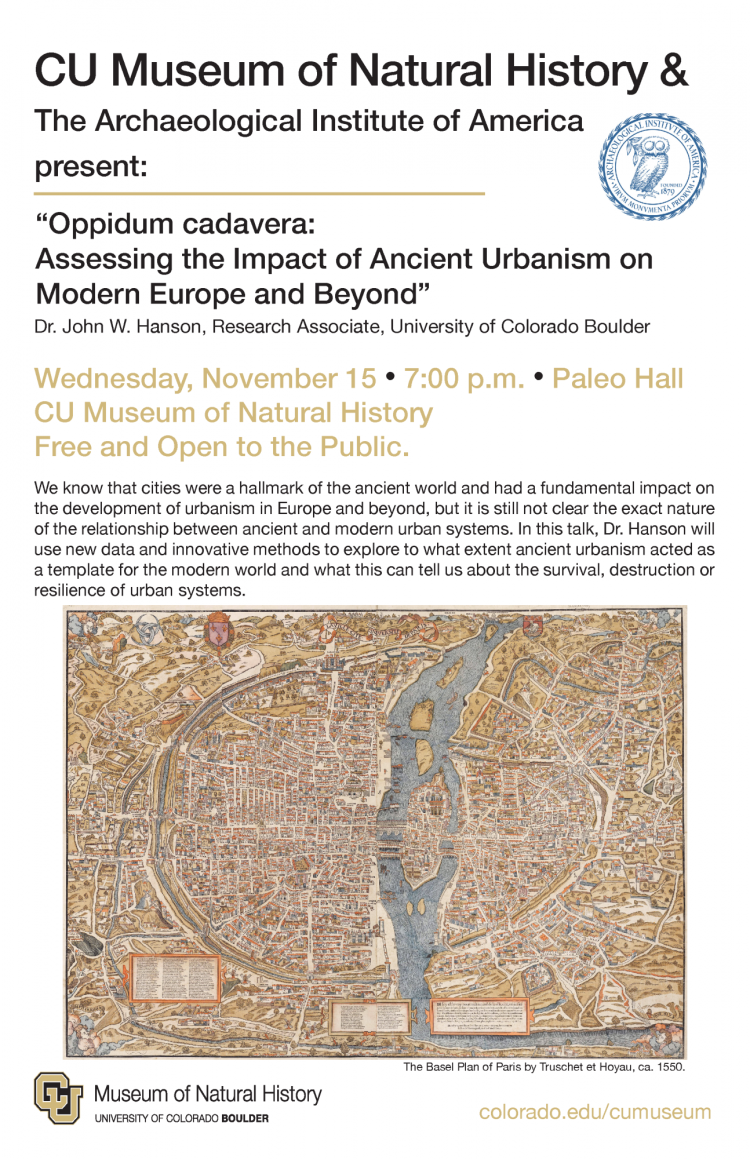 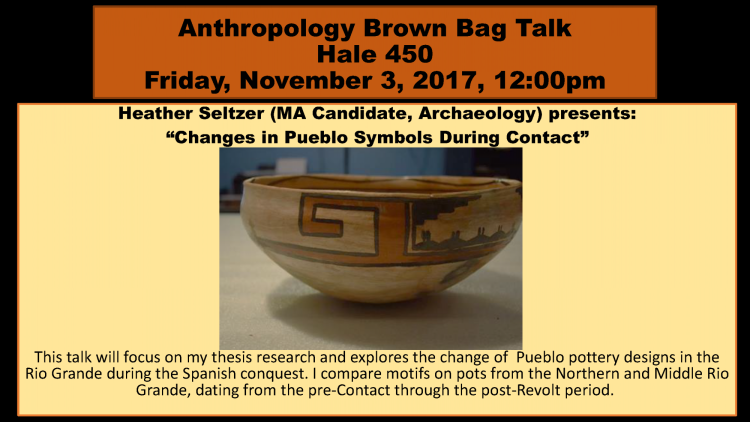 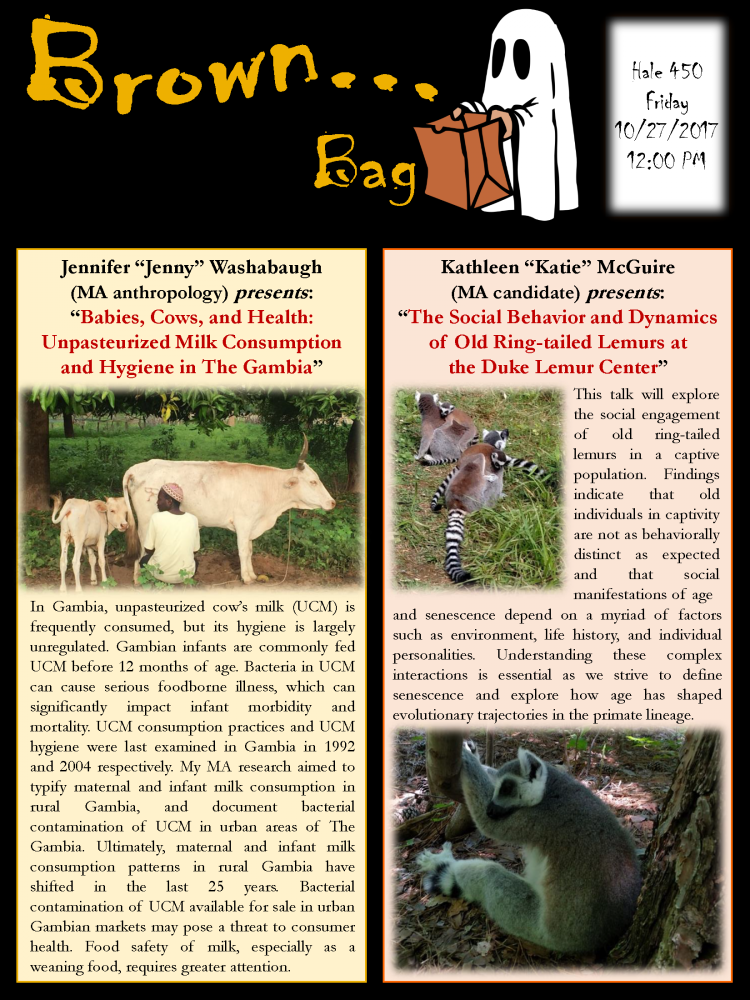 This is the third chapter of my dissertation. I address the ways in which Afro-Colombians in the region of María la Baja, Colombia re-signify their “contentious bodies” amidst parallel peace and war efforts. In the context of over 60 years of war, the government and armed paramilitary forces continue to frame Afro-Colombian campesinos (rural farmers) as both “innocent victims” and “guerrilla combatants." Given legacies of racialized marginalization, how do Afro-Colombian communities stake claims to lost land and violent pasts when their very bodies are presumed to challenge their innocence? I illustrate how individuals use their “contentious bodies” to resist militant and bureaucratic attempts to label them as perpetrators of violence. Afro-Colombian farmers enact embodied evidence, such as calloused farming hands, dark complexions, and scars, to assert their dignity and victimization. Through these corporeal and visual self-assertions, I examine the ways in which intersectional signifiers, are simultaneously read and performed within the context of war and peacetime violence.

What makes a successful NSF grant work? In this session we will read two grants for projects in cultural anthropology that were successfully funded by the National Science Foundation. We will analyze how and why these grants were compelling and steps that students and faculty can take to create funded research proposals. 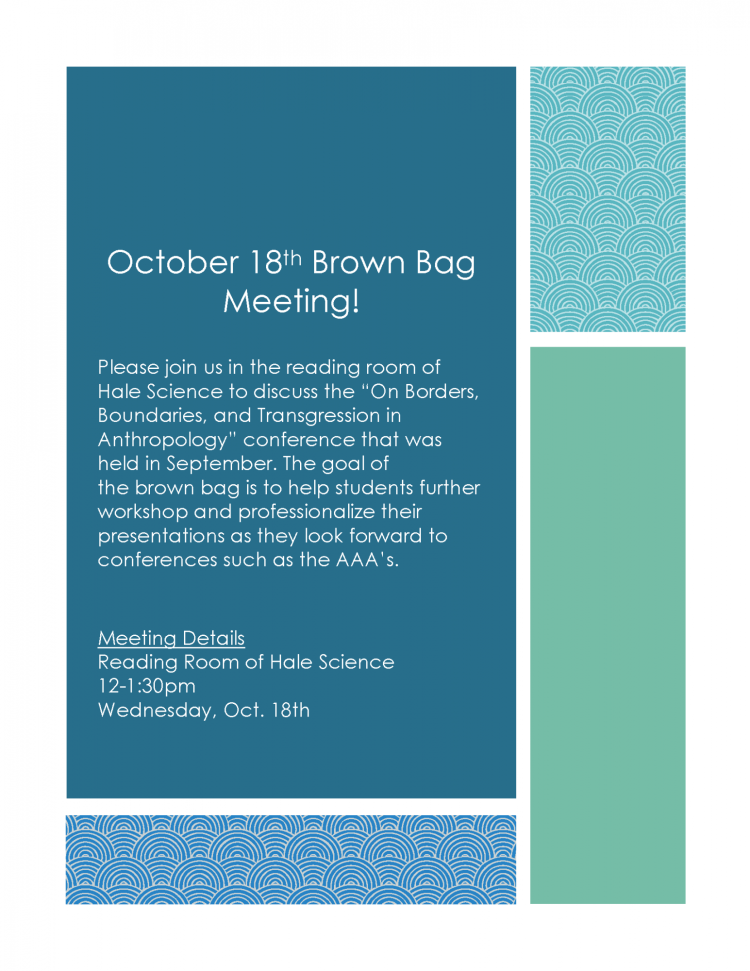 Please join us for a brown bag meeting to discuss the conference that was held in September. The goal of the brown bag is to help students further workshop and professionalize their presentations as they look forward to conferences such as the AAA’s.  If you are a student who gave a presentation, please come ready to discuss two things that you did well, as well as one thing that you would like to improve upon. Similarly, if you are a graduate student or faculty member who attended the conference, please come with constructive feedback in mind.  If you have any questions please contact Lauren Barrett at lauren.barrett@colorado.edu

Coffee & Donuts with Anthropology Professor Douglas Bamforth
ANTH Majors & Minors are invited to drop by for some coffee talk.  Everyone welcome!
Tuesday, October 10 from 9:00-10:30am in Hale 450 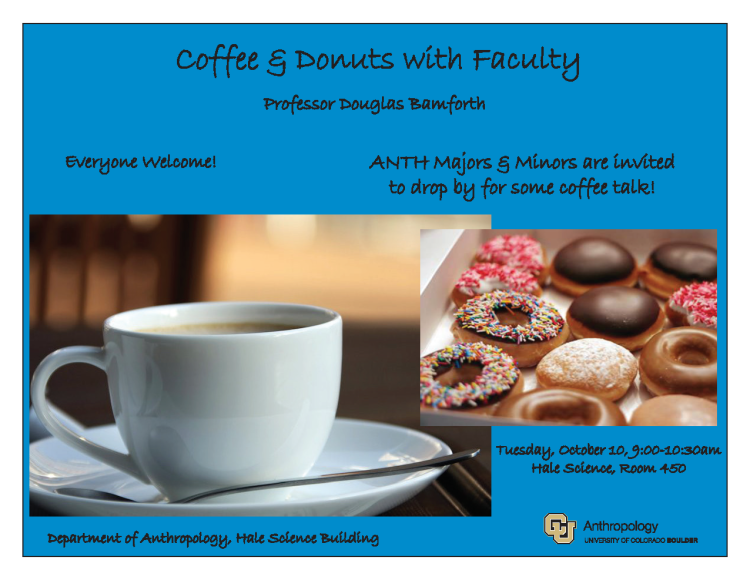 From the Flatirons to the Yellow Border: a primatologist's path outside academia
Dr. Catherine Workman, Senior Director of Wildlife and Wild Places for the National Geographic Society
4pm, Friday, October 6 in Hale 230

The Center for Documentary and Ethnographic Media Presents: An Art and Anthropology Colloquium
Thursday and Friday, October 5 - 6 in Hale 450

*Space in the workshop is limited. Email Christian Hammons to insure participation, or if you have any questions.

Abstract: “The judgment of history will recognize the goodness and nobility of our cause,” indicted drug trafficker and paramilitary leader Salvatore Mancuso told assembled legislators in the Colombian Congress in 2004. This talk examines the social life of this claim, considering the origins of paramilitary violence, the production of history about this violence, and its legacies in contemporary Colombian politics. Rather than being the result of state absence, I argue contemporary forms of Colombian paramilitarism emerged from settler colonialism throughout the early years of the 20th century. Popular histories of these groups, including elite oral histories and narconovela television dramas, portray paramilitaries as heroic saviors who won the country’s counterinsurgency war. I conclude by tracing the resonance of these claims in emergent violence in opposition to state-sponsored land restitution programs and current peace talks with the guerrillas.

Mimbres at the Museum: Earl, Hugo, Anna and Me
Dr. Steve Lekson, Curator and Professor of Archaeology, University of Colorado Boulder
7pm, Tuesday, September 19 in Hale 270

The 11th century Mimbres culture of New Mexico is famous for its ceramic art: black-and-white images of animals and people painted on simple earthenware pots.  In 1925, the CU Museum acquired a large collection of Mimbres pottery when Junius Henderson (the first Director of the Museum) asked archaeologist Earl Morris to excavate Mimbres sites.  Anna Shepard was a ceramic analyst who worked with Earl Morris.  She was fascinated by the formal symmetries of Mimbres art, and the Museum has her papers and laboratory notes.  Hugo Rodeck (who followed Henderson as Director) was smitten with Mimbres art.  In the 1960s he assembled an incredible archive of Mimbres images – now part of the CU Museum's holdings.  Steve Lekson (Curator of Archaeology) has done extensive fieldwork in the Mimbres region.  In the CU Museum's collections, he discovered many strange and wonderful Mimbres things.  This talk tells the stories of Mimbres at the Museum – along with insights and ideas about the ancient Mimbres people and their pottery.

Abstract: Between the Early and Late Formative periods (1800-150 BCE), major landscape changes occurred in the lower Río Verde Valley of Oaxaca, Mexico. Highly productive ecological niches developed due to floodplain expansion and the formation of resource-rich estuaries. To investigate how prehispanic settlement pattering in the lower Verde region was affected by shifts in resource availability, I conducted an interdisciplinary dissertation study from January-June of 2016. The Río Verde Settlement Project (RVSP) included a continuation of the regional archaeological survey as well as a systematic soil sampling program to examine variation in soil fertility. This presentation provides details on the project methodology and presents preliminary conclusions on changes in settlement ecology after the environmental changes took place (c.a. 150 BCE). The project results include promising information for answering two major research questions. First, did settlement concentrate around the floodplain and estuaries after they formed? Second, if people did indeed congregate in these resource-rich areas, was there a time lag between the ecological changes and settlement shifts?

The final portion of the presentation will discuss promising future research applications of my dissertation data related to settlement scaling theory. Ortman and colleagues argue that settled area and population density are linked mathematically in settlements around the world (e.g., the ancient Andes and the Basin of Mexico) Do lower Verde settlements exhibit similar properties?

Abstract: On July 19, 2013 the Prime Ministers of Australia and Papua New Guinea agreed to the Regional Resettlement Arrangement between Australia and Papua New Guinea (colloquially known as “The Papua New Guinea Solution” or the RRA) an international agreement that diverts asylum seekers who attempt to reach Australia by boat to Papua New Guinea, for immediate detention and processing, and then eventual resettlement in Papua New Guinea - a country that did not have a national refugee policy until October 2015. In this talk, the author will describe the lives of the people who have been affected by the RRA ethnographically, placing their lives within the larger story of the RRA. The talk will end with some questions for all of us, as anthropologists, about how we are to approach the socio-ecological present today as scholars and as humans, and about the value of ethnographic anthropology, something that has recently been loudly critiqued and roundly discounted by some of the more irritating members of our discipline.