Measuring seven-by-24 inches and most likely still in its original frame, this large three-piece panoramic photograph came to the Heritage Center from University Communications photographer, Casey Cass. The Cass family has quite a legacy at CU. Casey’s father, Alan Cass (A&S ex’63, HonDocHum’99), was the head of the Glenn Miller Archive and his grandfather, Claude Cass, worked as Macky Auditorium’s director and stage manager for several years. Claude later became one of CU’s chief building engineers and part of the team that constructed the 1953 Folsom Stadium addition.

When Casey dropped by the Heritage Center he had no idea what event the photograph pictured or even why his grandfather had it hanging in his office for years. His best guess was that Claude enjoyed the image, especially since Macky was in the background. That was all the information we had to start our research, and we were eager to figure out what was going on in the image.

The print shows a significant gathering at Gamble Field, CU’s first football, baseball and track field near where the UMC is today. Due to the number of people on the field and in the stands, we were unsure if this was a sporting event or a demonstration.

So I put on my detective’s hat, grabbed a magnifying glass and took a very close look to see what clues the photograph might reveal.

Want to know what it’s like to walk in a historian’s shoes? Find out how we solved the mystery behind the event captured in this image!

The first thing one should do when facing a new mystery is to take a close look at what is in front of them and determine what initial questions or observations come to mind that could provide clues. My first question was when did this event take place? Without an idea of the when, I would be unable to find out the who, what, where and why.

When investigating a photograph, one should always turn it over first to see if someone wrote some identifying details on the back. As I took the matted print out of the frame, I quickly realized it would not be my lucky day. The only legible pencil marks written on the back were “Return Photo in Good Condition,” “8415” and what looks like “Slick Sat 10/8.” None of this information proved helpful.

Since I had nothing that might hint at a date, an event or even a photographer’s name, focusing on the cars seemed to be the simplest second step. My initial guess dated the vehicles from the late 1910s through the early 1920s. Having learned a few things from my vintage-car-guy husband, I felt comfortable with the general time frame. When I saw the two license plates, however, I knew I could do a better job zeroing in on a year. By doing a quick Internet search, I was able to narrow the date range to 1919-1920 based on the style of the plates on two of the cars in the foreground.

Compare the plates in the photo to the resource here. Do you come to the same conclusion?

While scouring the photograph for additional clues, a colleague flipped through yearbooks starting in 1919. Wishing for a slightly more powerful magnifying glass, I squinted far into the photo’s background and uncovered a marching band leading a procession of people. The band made me quite confident that it was a sporting event, most likely football. By the blurry details I could pick out, the band uniforms looked like the military-style jackets the CU marching band wore in the 1920s. I slowly scanned the crowds on both sets of bleachers and located a small marching band for the opposing team. Now I was more confident that we were looking at a football game.

After about fifteen minutes of yearbook searching, a clue surfaced. Another photograph found of the same event taken from a slightly different angle in the 1920-21 yearbook. Score! Reading through the football season notes about the various games, we felt that the photograph was probably showing a halftime event during the big state championship game with the Colorado Aggies (CSU). The game finished in a tie score of 7-7. With that tie and a win against the Oklahoma Aggies later in the season, CU took second place overall in the Mountain circuit of their division that year.

In addition to the yearbook, we looked through some loose scrapbook pages with the hope of new clues. Sure enough, one page had a copy of our photo in the Colorado Alumnus pasted onto it. It seems this football game was also the Homecoming game that year. 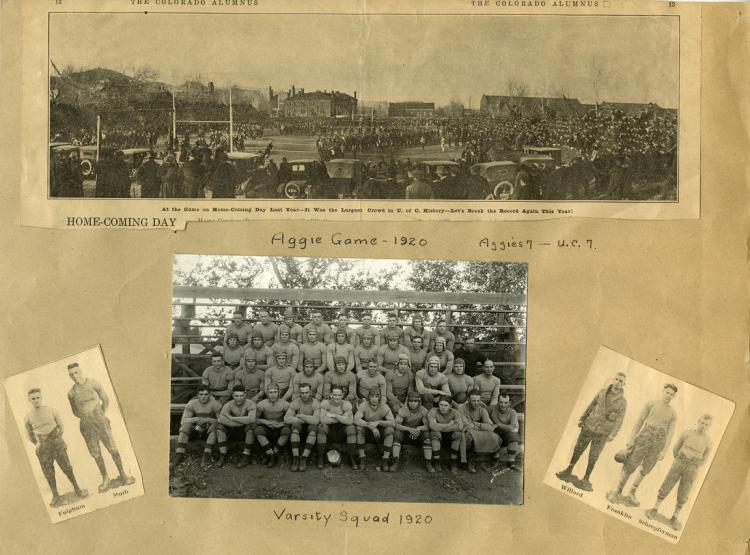 This new information then led me to find an actual Colorado Alumnus article that detailed everything. The game took place on Nov. 20, 1920, with about 10,000 spectators watching, record attendance at that time! It sounded like a nail-biter of a skirmish with CU scoring late in the third quarter. CU fans were loud and enthusiastic for the entire game, often drowning out the opposing team’s band. A group of about 500 Boulder businessmen sat together in the stands and at some point paraded onto the field. While there is no way to confirm it, this impromptu parade is probably what is happening on the field, especially with the marching band leading the train of people. 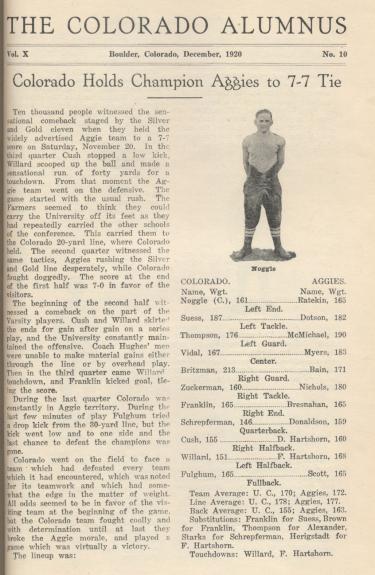 As with most historical investigations, there are always questions to which you will never know the answer. One thing we will probably never understand is why Claude Cass had this photograph in the first place and why he was so compelled by it to keep it in his office for so many years. While he did not attend CU, the 1920 census shows him as 17 years old and living in Boulder. Since the football game was such a significant event, perhaps he was actually at this game and one of the young men on the field.

Coloradoan. Boulder, CO: Associated Students of the University of Colorado, 1920.