Lau Malaver is a fiction writer, educator, scholar and performer. She is currently a graduate MA candidate at the University of Colorado Boulder, affiliated with the School of Education and the Department of Comparative Ethnic Studies.

“My name is Laura Malaver — I go by Lau — and I am from Colombia. I identify as a Latinx, genderqueer performer and scholar. After my 11th birthday, my family and I moved to Golden, Colo., bringing with that a series of obstacles I would later learn were systemic barriers put in place to the detriment of people of color in the United States. After Golden, I lived in four different states, three different countries and attended eight schools in total from age 11 to age 19. All this is to say my life has been informed by transitions, movement, barriers, borders. Though difficult at times, such crossings of borders and liminal spaces have encouraged resiliency in me.

“After attending school in Abu Dhabi, UAE, I learned that authenticity and embodiment of identities are both fundamental characteristics by which to survive. I landed back in the U.S. after graduating from high school, after coming out as gay and after finding storytelling and narrative as an outlet of expression and liberation.

“Post-graduation in 2015 with degrees in Spanish literature and humanities, I worked at and taught for a non-profit geared toward supporting sexual health education. Missing home, I returned to school after a year. Home has essentially been academia, a place where my thoughts are valued and in which I hope to make change.” 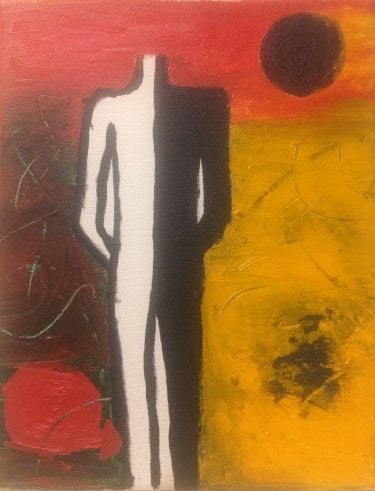 Something Gone and New – “Rarely is the present at fault for our future; perhaps at times we reprimand our doings in the present as causalities for the future. However, much of what is believable rests in a sense of holding futurity. To believe in our existence relies on us holding belief. This piece lets a past desire reach the present that is no longer present but lives in the future. It is empowering to change our lives as the narratives around us (incorrectly) shape us.”
Student Arts Program official selection 2018