Banner image: The U.S. Army tests a nuclear warhead off of Bikini Atoll in 1946. (Credit: U.S. Department of Defense)

A nuclear war between India and Pakistan could, over the span of less than a week, kill 50-125 million people—more than the death toll during all six years of World War II, according to new research.

A new study conducted by researchers from CU Boulder and Rutgers University examines how such a hypothetical future conflict would have consequences that could ripple across the globe. Today, India and Pakistan each have about 150 nuclear warheads at their disposal, and that number is expected to climb to more than 200 by 2025.

An animation showing the spread of smoke in Earth's atmosphere following a nuclear war between India and Pakistan in 2025. (Credit: Charles Bardeen/NCAR)

The picture is grim. That level of warfare wouldn’t just kill millions of people locally, said CU Boulder’s Brian Toon, who led the research published today in the journal Science Advances. It might also plunge the entire planet into a severe cold spell, possibly with temperatures not seen since the last Ice Age.

His team’s findings come as tensions are again simmering between India and Pakistan. In August, India made a change to its constitution that stripped rights from people living in the long-contested region of Kashmir. Soon after, the nation sent troops to Kashmir, moves that Pakistan criticized sharply.

“An India-Pakistan war could double the normal death rate in the world,” said Toon, a professor in the Laboratory of Atmospheric and Space Physics (LASP). “This is a war that would have no precedent in human experience.”

It’s a subject that Toon, also of the Department of Atmospheric and Oceanic Sciences, has had on his mind for decades.

He came of age during the height of the Cold War when schoolchildren still practiced ducking-and-covering under their desks. As a young atmospheric scientist in the early 1980s, he was part of a group of researchers who first coined the term “nuclear winter”—a period of extreme cold that would likely follow a large-scale nuclear barrage between the U.S. and Russia.

And despite the collapse of the Soviet Union, Toon believes that such weapons are still very much a threat—one that’s underscored by current hostilities between India and Pakistan.

“They’re rapidly building up their arsenals,” Toon said. “They have huge populations, so lots of people are threatened by these arsenals, and then there’s the unresolved conflict over Kashmir.”

In his latest study, he and his colleagues wanted to find out just how bad such a conflict could get. To do that, the team drew on a wide range of evidence, from computer simulations of Earth’s atmosphere to accounts of the bombings of Hiroshima and Nagasaki in Japan in 1945.

Based on their analysis, the devastation would come in several stages. In the first week of the conflict, the group reports that India and Pakistan combined could successfully detonate about 250 nuclear warheads over each other’s cities.

There’s no way to know how powerful these weapons would be—neither nation has conducted nuclear tests in decades—but the researchers estimated that each one could kill as many as 700,000 people. 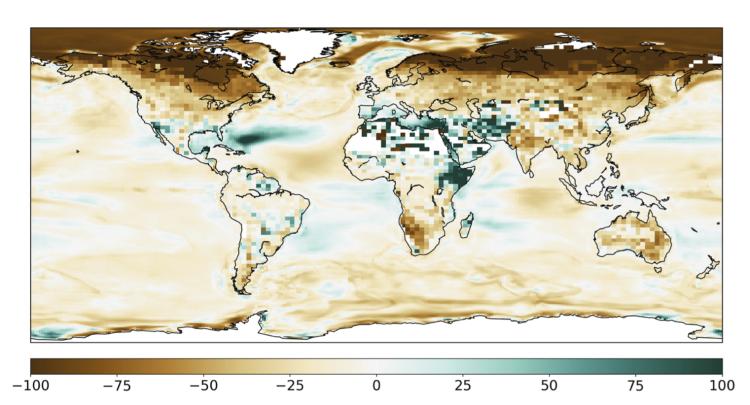 A map showing the changes in the productivity of ecosystems around the world in the second year after a nuclear war between India and Pakistan. Regions in brown would experience steep declines in plant growth, while regions in green could see increases. (Credit: Nicole Lovenduski and Lili Xia)

Most of those people wouldn’t die from the blasts themselves, however, but from the out-of-control fires that would follow.

For the rest of the globe, the fires would just be the beginning.

The researchers calculated that an India-Pakistan war could inject as much as 80 billion pounds of thick, black smoke into Earth’s atmosphere. That smoke would block sunlight from reaching the ground, driving temperatures around the world down by an average of between 3.5-9 degrees Fahrenheit for several years. Worldwide food shortages would likely come soon after.

“Our experiment, conducted with a state-of-the-art Earth system model, reveals large-scale reductions in the productivity of plants on land and of algae in the ocean, with dangerous consequences for organisms higher on the food chain, including humans,” said study coauthor Nicole Lovenduski, an associate professor of atmospheric and oceanic sciences and a fellow of the Institute of Arctic and Alpine Research (INSTAAR).

Toon recognizes that the scope of such a war may be hard for people to wrap their heads around. But he hopes that the study will show people around the world that the end of the Cold War didn’t eliminate the risk of global nuclear war.

“Hopefully, Pakistan and India will take note of this paper,” he said. “But mostly, I’m concerned that Americans aren’t informed about the consequences of nuclear war.”

Seventy-eight years ago on Jan. 27, the Auschwitz concentration camp closed after liberation by the Soviet army. Professor Janet Jacobs, who researches genocide, trauma and collective memory, discusses the ways in which the experiences and trauma of Holocaust survivors are passed down through generations. END_OF_DOCUMENT_TOKEN_TO_BE_REPLACED

A model of your very own kidney made entirely from soft and pliable polymers? Researchers at two CU campuses are on the cusp of 3D printing realistic replicas of human anatomy. END_OF_DOCUMENT_TOKEN_TO_BE_REPLACED

Legalizing recreational cannabis does not increase substance use disorders or use of other illicit drugs in adults and may reduce alcohol-related problems, according to new research. The study also found no link between cannabis legalization and increases in cognitive, psychological, social, relationship or financial problems. END_OF_DOCUMENT_TOKEN_TO_BE_REPLACED
Return to the top of the page