See the announcement from NASA

Every night on Mars, when the sun sets and temperatures fall to minus 80 degrees Fahrenheit and below, an eerie phenomenon spreads across much of the planet’s sky: a soft glow created by chemical reactions occurring tens of miles above the surface.

An astronaut standing on Mars couldn’t see this “nightglow”—it shows up only as ultraviolet light. But it may one day help scientists to better predict the churn of Mars’ surprisingly complex atmosphere.

“If we’re going to send people to Mars, we better understand what’s going on in the atmosphere,” said Zachariah Milby, a professional research assistant at the Laboratory for Atmospheric and Space Physics (LASP) at CU Boulder.

In a study published today in the Journal of Geophysical Research: Space Physics, Milby and his colleagues set their sights on understanding the phenomenon. They drew on data from NASA’s Mars Atmosphere and Volatile Evolution (MAVEN) spacecraft to map the planet’s nightglow in greater detail than ever before.

The team’s findings show how this light display ebbs and flows over Mars’ seasons. The group also discovered something unusual: an unexpectedly bright spot that appears in the planet’s atmosphere just above its equator.

Mars, in other words, still has a few surprises in store for scientists, said LASP’s Nick Schneider, lead author of the new study.

“The behavior of the Martian atmosphere is every bit as complicated and insightful as that of Earth’s atmosphere,” said Schneider, also a professor in the Department of Astrophysical and Planetary Sciences.

MAVEN wasn’t the first spacecraft to spot the nightglow on Mars, a phenomenon that resembles similar glows seen on Earth and Venus. That honor belongs to the European Space Agency’s Mars Express Mission, which entered orbit around Mars in 2003.

But the mission was the first to capture the nightglow for what it is—a dynamic and constantly evolving phenomenon. 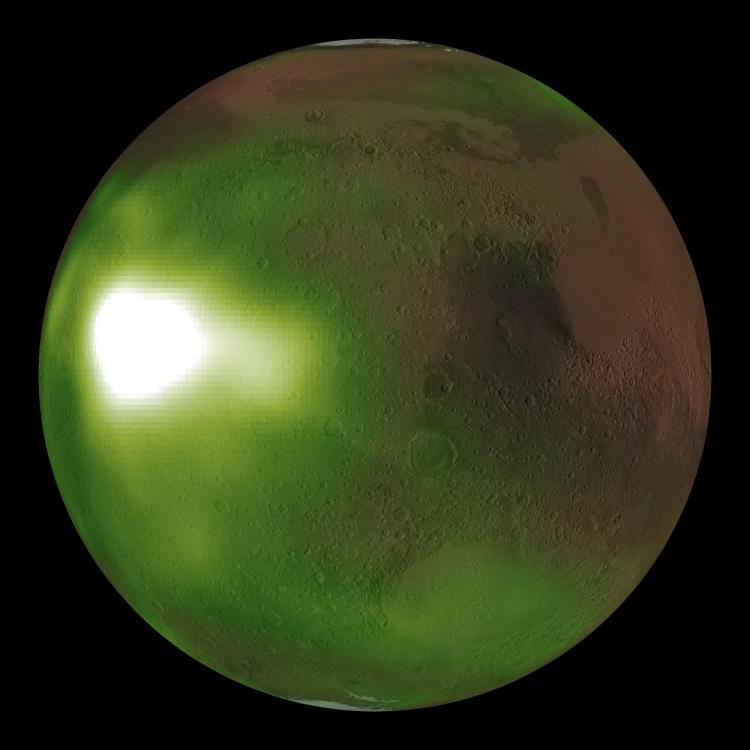 Top: Graphic showing how Mars' nightglow is created in the atmosphere; bottom: An exceptionally bright spot shows up in Mars' atmosphere just above the equator at 0 degrees longitude and 0 degrees latitude. (Credits: LASP)

“It wasn’t until MAVEN came along in 2014 that we could actually snap this full picture five times a day as the planet rotates,” Schneider said.

In the new study, researchers used MAVEN’s Imaging Ultraviolet Spectrograph (IUVS)—an instrument designed and built at LASP—to snap images of Mars from a distance of 3,700 miles. Those far-flung recordings allowed the team to trace the path of nightglow as it moved across the entire planet.

Milby led the data analysis for the research while he was still an undergraduate student at CU Boulder.

He explained that the eerie aura appears when air currents high in Mars’ atmosphere plunge to about 40 miles above the planet’s surface. When that happens, lone nitrogen and oxygen atoms in the atmosphere combine to form molecules of nitric oxide, giving off small bursts of ultraviolet light in the process.

“It’s a great tracer for dynamics between the layers of the atmosphere,” Milby said.

Milby added that, like on Earth, those dynamics can shift with the seasons. The MAVEN team found, for example, that Mars’ nightglow seems to be brightest at the height of the planet’s northern and southern winters when hotter currents rush away from the equator and toward Mars’ poles.

Milby also found something he wasn’t expecting in the data: an extra-bright blob of nightglow that appeared and disappeared from almost exactly above 0 degrees longitude and 0 degrees latitude on Mars.

“We spent weeks thinking there was a bug in our code somewhere,” Milby said.

There wasn’t a bug. The researchers still aren’t sure why Mars is glowing so much at that unusual spot—it may have something to do with the shape of the terrain underneath. But Schneider said that observations like this can help scientists improve their computer models of how the planet’s atmosphere works.

And that could lead to something that every astronaut might use: more accurate weather reports on Mars.

“We use supercomputers to predict weather on Earth so that you can plan for your vacation or growing crops,” Schneider said. “The same computer models can be spun up for Mars and all the other planets.”

The research was funded by the MAVEN mission. MAVEN's principal investigator is based at the University of Colorado's Laboratory for Atmospheric and Space Physics, Boulder, and NASA Goddard manages the MAVEN project.

Other coauthors on the new study included LASP researchers Emilie Royer, Justin Deighan, Sonal Jain and Ian Stewart. The study also included coauthors from the Institute of Astrophysics of Andalusia, University of Liège, French National Center for Scientific Research (CNRS) and the University of Michigan.

For decades, a community of "data stewards" has toiled behind the scenes to build records showing that humans, and not the sun, are responsible for driving the planet's climate into dangerous territory. END_OF_DOCUMENT_TOKEN_TO_BE_REPLACED

Astrophysicist John Bally takes a look at the first images from NASA's James Webb Space Telescope—an instrument that is gazing farther into space and time than anything ever built by humans. END_OF_DOCUMENT_TOKEN_TO_BE_REPLACED

When NASA's OSIRIS-REx spacecraft arrived at the asteroid Bennu, scientists discovered something surprising: The asteroid's surface wasn't smooth like many were expecting but was covered in large boulders. Now, a team of physicists think they know why. END_OF_DOCUMENT_TOKEN_TO_BE_REPLACED
Return to the top of the page