A CU Boulder astrophysicist is searching the light coming from a distant, and extremely powerful celestial object, for what may be the most elusive substance in the universe: dark matter.

In two recent studies, Jeremy Darling, a professor in the Department of Astrophysical and Planetary Sciences, has taken a deep look at PSR J1745-2900. This body is a magnetar, or a type of collapsed star that generates an incredibly strong magnetic field.

“It’s the best natural dark matter detector we know about,” said Darling, also of the Center for Astrophysics and Space Astronomy (CASA) at CU Boulder.

He explained that dark matter is a sort of cosmic glue—an as-of-yet unidentified particle that makes up roughly 27% of the mass of the universe and helps to bind together galaxies like our own Milky Way. To date, scientists have mostly led the hunt for this invisible matter using laboratory equipment.

Darling has taken a different approach in his latest research: Drawing on telescope data, he’s peering at PSR J1745-2900 to see if he can detect the faint signals of one candidate for dark matter—a particle called the axion—transforming into light. So far, the scientist’s search has come up empty. But his results could help physicists working in labs around the world to narrow down their own hunts for the axion. 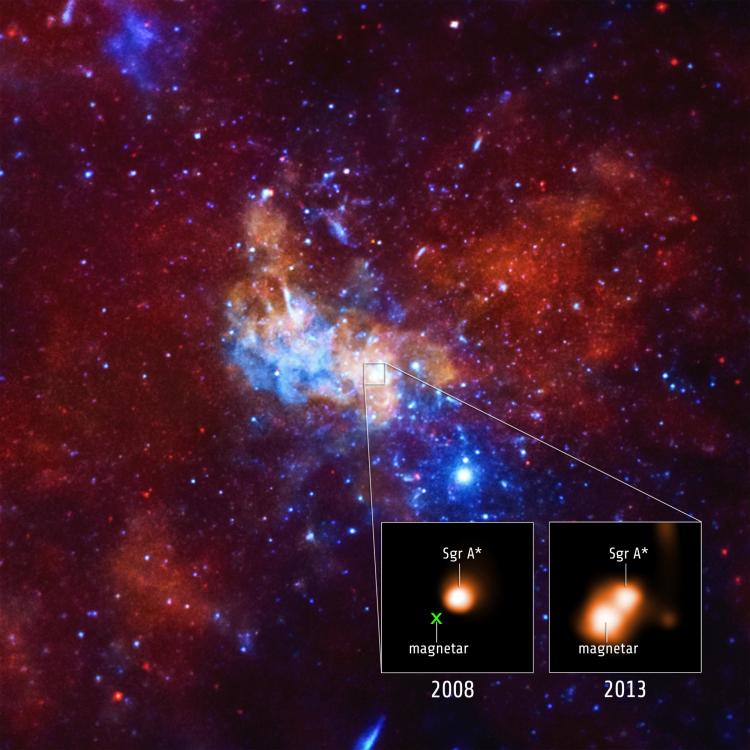 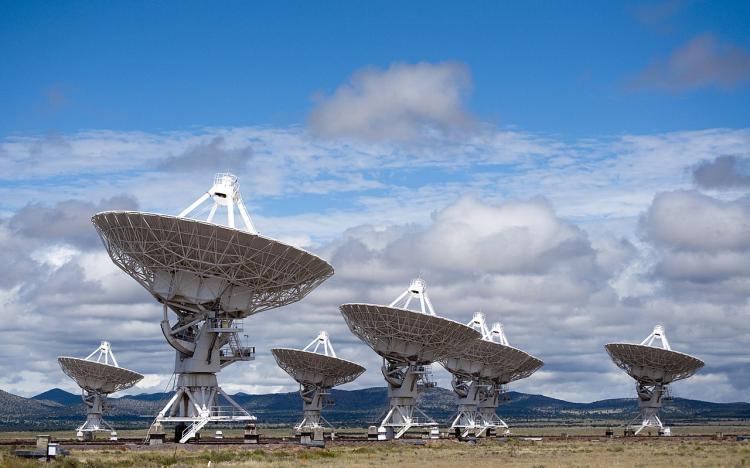 Top: An image of the middle of the Milky Way Galaxy showing the location of the supermassive black hole at its center, called Sagittarius A*, and the nearby magnetar PSR J1745-2900; bottom: Several of the 28 dish antennae that make up the Very Large Array. (Credits: NASA/CXC/FIT/E; CC photo by CGP Grey via Wikimedia Commons)

The new studies are also a reminder that researchers can still look to the skies to solve some of the toughest questions in science, Darling said. He published his first round of results this month in The Astrophysical Journal Letters and Physical Review Letters.

“In astrophysics, we find all of these interesting problems like dark matter and dark energy, then we step back and let physicists solve them,” he said. “It’s a shame.”

This magnetar orbits the supermassive black hole at the center of the Milky Way Galaxy from a distance of less than a light-year away. And it’s a force of nature: PSR J1745-2900 generates a magnetic field that is roughly a billion times more powerful than the most powerful magnet on Earth.

“Magnetars have all of the magnetic field that a star has, but it’s been crunched down into an area about 20 kilometers across,” Darling said.

And it’s where Darling has gone fishing for dark matter.

He explained that scientists have yet to locate a single axion, a theoretical particle first proposed in the 1970s. Physicists, however, predict that these ephemeral bits of matter may have been created in monumental numbers during the early life of the universe—and in large enough quantities to explain the cosmos’ extra mass from dark matter. According to theory, axions are billions or even trillions of times lighter than electrons and would interact only rarely with their surroundings.

That makes them almost impossible to observe, with one big exception: If an axion passes through a strong magnetic field, it can transform into light that researchers could, theoretically, detect.

Scientists, including a team at JILA on the CU Boulder campus, have used lab-generated magnetic fields to try to capture that transition in action. Darling and other scientists had a different idea: Why not try the same search but on a much bigger scale?

“Magnetars are the most magnetic objects we know of in the universe,” he said. “There’s no way we could get close to that strength in the lab.”

To make use of that natural magnetic field, Darling drew on observations of PSR J1745-2900 taken by the Karl G. Jansky Very Large Array, an observatory in New Mexico. If the magnetar was, indeed, transforming axions into light, that metamorphosis might show up in the radiation emerging from the collapsed star.

The effort is a bit like looking for a single needle in a really, really big haystack. Darling said that while theorists have put limits on how heavy axions might be, these particles could still have a wide range of possible masses. Each of those masses, in turn, would produce light with a specific wavelength, almost like a fingerprint left behind by dark matter.

Darling hasn’t yet spotted any of those distinct wavelengths in the light coming from the magnetar. But he has been able to use the observations to probe the possible existence of axions across the widest range of masses yet—not bad for his first attempt. He added that such surveys can complement the work happening in Earth-based experiments.

Konrad Lehnert agreed. He’s part of an experiment led by Yale University—called, not surprisingly, HAYSTAC—that is seeking out axions using magnetic fields created in labs across the country.

Lehnert explained that astrophysical studies like Darling’s could act as a sort of scout in the hunt for axions—identifying interesting signals in the light of magnetars, which laboratory researchers could then dig into with much greater precision.

“These well-controlled experiments would be able to sort out which of the astrophysical signals might have a dark matter origin,” said Lehnert, a fellow at JILA, a joint research institute between CU Boulder and the National Institute of Standards and Technology (NIST).

Darling plans to continue his own search, which means looking even closer at the magnetar at the center of our galaxy: “We need to fill in those gaps and go even deeper.”

For decades, a community of "data stewards" has toiled behind the scenes to build records showing that humans, and not the sun, are responsible for driving the planet's climate into dangerous territory. END_OF_DOCUMENT_TOKEN_TO_BE_REPLACED

Astrophysicist John Bally takes a look at the first images from NASA's James Webb Space Telescope—an instrument that is gazing farther into space and time than anything ever built by humans. END_OF_DOCUMENT_TOKEN_TO_BE_REPLACED

When NASA's OSIRIS-REx spacecraft arrived at the asteroid Bennu, scientists discovered something surprising: The asteroid's surface wasn't smooth like many were expecting but was covered in large boulders. Now, a team of physicists think they know why. END_OF_DOCUMENT_TOKEN_TO_BE_REPLACED
Return to the top of the page