The sun sets behind Earth as seen from the International Space Station. (Credit: NASA)

In about a year, a new NASA instrument designed and built in Colorado will ride on the International Space Station (ISS). From there, it will look down at Earth to measure the light reflecting off our planet’s puffy clouds, expansive ice sheets, bodies of water, forests, deserts and other land surfaces.

Slated to launch in December 2023, the mission—known as the Climate Absolute Radiance and Refractivity Observatory (CLARREO) Pathfinder—will measure sunlight reflecting from Earth with up to 10 times more accuracy than existing space-based sensors. The almost $70-million effort seeks to lay the groundwork for future space instruments to track the pace of climate change with unprecedented accuracy. 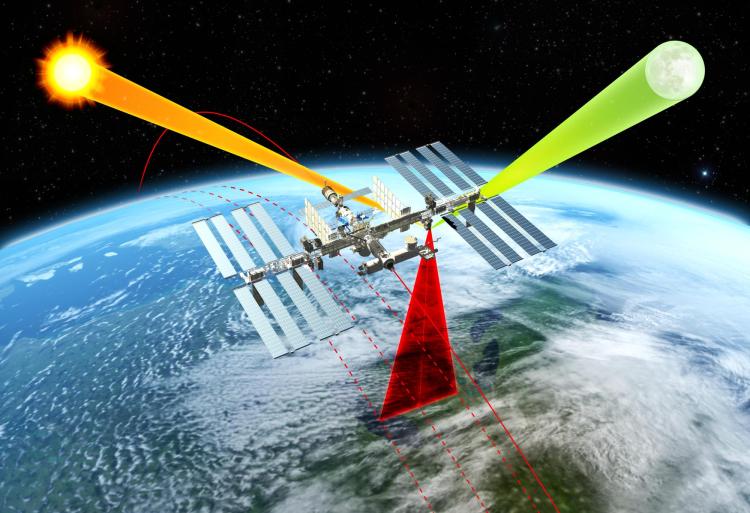 Graphic showing how CLARREO Pathfinder will sit on the International Space Station, alternately observing the sun, Earth and even the moon. (Credit: NASA) 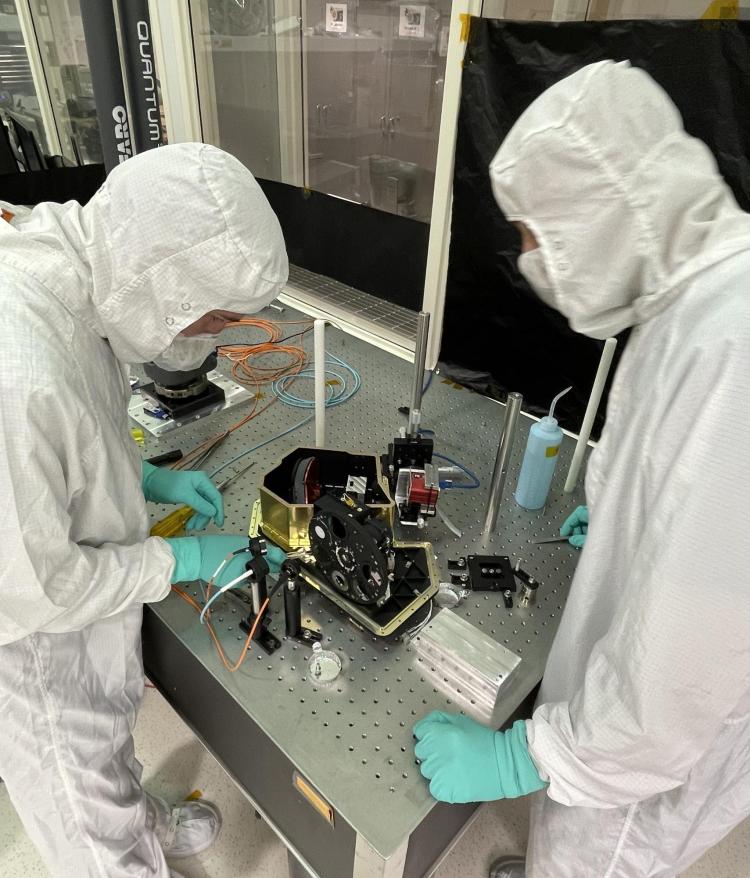 Engineers at LASP work on the sensor for the CLARREO Pathfinder mission. (Credit: LASP) 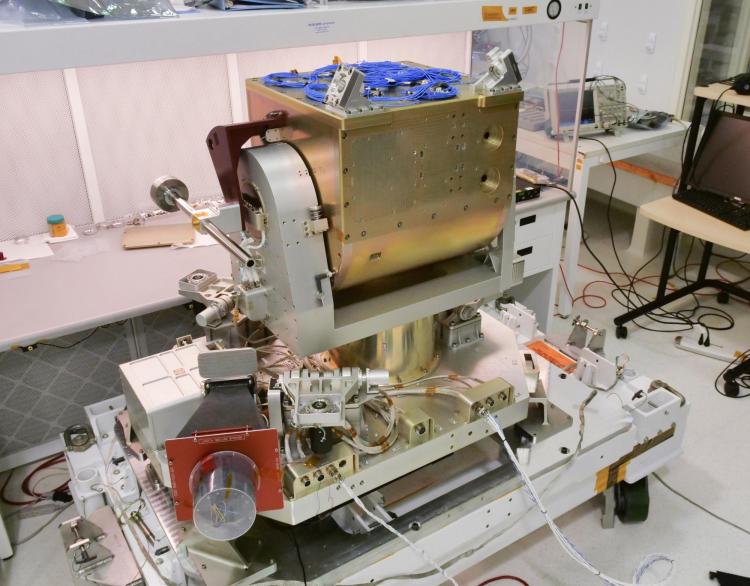 “We’re entering a new era of high-accuracy climate observations that will supply a lot of information to the people that set policy on climate change, mitigation and adaptation,” said Peter Pilewskie, professor at the Laboratory for Atmospheric and Space Physics (LASP) at CU Boulder and lead scientist for CLARREO Pathfinder.

LASP is developing the sensor, and NASA’s Langley Research Center in Hampton, Virginia, leads the overall mission. CLARREO’s target is “reflected sunlight”—or the incident solar radiation that is redirected back into space by Earth’s atmosphere and surface. Some of that light is visible, but CLARREO can also measure what scientists call near-infrared radiation.

“We can’t see near-infrared radiation. We can’t sense it with our eyes,” Pilewskie said. “But it makes up a large fraction of the radiative energy Earth receives from the sun.”

That light is also critical to understanding how humans are changing Earth’s climate, he said. As a pathfinder mission, CLARREO packs a limited, but impactful, scope: The mission will demonstrate new approaches to measuring reflected sunlight that have never before flown in space and also help existing space missions deliver more accurate data on Earth’s climate.

CLARREO Pathfinder will spend nearly a year mounted to the exterior truss of the ISS, taking turns peering at the sun and Earth.

Daniel Baker, director of LASP, explained that CLARREO Pathfinder is the latest in the institute’s decades of work to better understand the planet on which we live.

“Developing ever more sensitive sensor systems to assess Earth’s radiation budget is one of our lab’s highest callings,” Baker said. “Having ‘new eyes’ on our fragile atmosphere will give policy makers information to judge whether our actions are helping or hurting as we seek to avert further climate change.”

Humans have long been fascinated by reflected sunlight—picture light shining from behind clouds during sunset or the alpenglow made by reddish light illuminating mountain peaks.

But there’s also a lot happening in Earth’s atmosphere that humans can’t see. As solar radiation bathes the planet, Earth’s atmosphere, land and oceans absorb some of that energy, while the remainder makes its way back to space. The balance of incoming versus outgoing radiation helps to shape the planet’s climate, contributing to shifts in weather and temperature at the ground.

At any point, the light that reflects from Earth back into space is roughly 1,000,000 times less bright than the light coming from the sun. CLARREO Pathfinder can sort that radiation into different wavelengths so that scientists can identify what constituents, such as clouds, vegetation or ice, are modifying the reflected light.

“We’re confident that Earth’s climate is changing, and we’re confident about the source of that change,” Pilewskie said. “But climate is very complicated. Our ability to make measurements at high accuracy will help us to better understand those underlying causes of climate change.”

So far, researchers haven’t been able to record reflected sunlight with that level of accuracy.

CLARREO Pathfinder could change that. Engineers at LASP are currently testing the sensor in Boulder to make sure that it will perform as promised in space. Once it launches, CLARREO will map where reflected sunlight is coming from on Earth to within about half a kilometer, or one-third of a mile.

The sensor owes its incredible accuracy to a novel calibration approach, said Greg Kopp, senior research scientist at LASP and instrument principal investigator for the mission.

“CLARREO will use the best-known in-space light source there is to do on-orbit calibrations,” he said. “That light source is the sun.”

Kopp explained that the sun is an extremely dependable source of light—over the span of more than a decade, the star’s output of energy only changes by about one-tenth of 1%, on average. To make sure CLARREO Pathfinder is collecting accurate data on Earth’s brightness, the sensor will first point toward the sun, narrowing its aperture down to about half a millimeter wide. Using a much larger aperture, it will then swivel back to Earth to measure the planet’s reflected light as a percentage of the total light coming from the sun.

“It’s like having your favorite calibrator already there waiting for you when you get to space,” Kopp said.

For Pilewskie, next year’s launch will bring his career full circle. He first measured reflected sunlight more than 35 years ago as a graduate student by observing the sides of cumulus clouds from the ground. Now, he’s following similar phenomena from space with a new level of accuracy.

“Being able to take these kinds of measurements to space is really a career goal of mine,” Pilewskie said.

CU Boulder has been selected as a member of the United States Space Command Academic Engagement Enterprise, a new national program designed to expand collaboration and academic exchanges between universities and Space Command. END_OF_DOCUMENT_TOKEN_TO_BE_REPLACED

Since July 2022, a miniature satellite about the size of a shoebox has been orbiting Earth and monitoring how much solar energy reaches the atmosphere, one of the "most important" Earth science measurements. Now, scientists are finalizing their analysis of the first five months of the testing. END_OF_DOCUMENT_TOKEN_TO_BE_REPLACED

The historic spacecraft soon hit Earth's atmosphere flying at speeds of almost 25,000 mph. CU Boulder aerospace engineer Iain Boyd breaks down what will happen to the capsule, and how NASA will keep it safe on reentry. END_OF_DOCUMENT_TOKEN_TO_BE_REPLACED
Return to the top of the page