In September, a series of women- and girl-led protests sent shockwaves through Iran as thousands of Iranians flooded the streets of Iran’s capital, Tehran, in response to the death of 22-year-old Jina Mahsa Amini in police custody. Mahsa Amini was arrested by the “morality police” for not wearing the hijab in accordance with government standards.

Peaceful protests quickly spread throughout Iran, and even globally—including protests in Denver and on the World Cup stage where the Iranian men’s team opted to not sing the national anthem ahead of their opening match against England.

In Iran, protestors have reportedly been met with tear gas, mass arrests and excessive and even lethal force. Iranian state media reported one protester has been sentenced to death for their role in the movement. Meanwhile, the United Nations Human Rights Office of the High Commissioner has called for an independent international investigation of the crackdown on protesters. 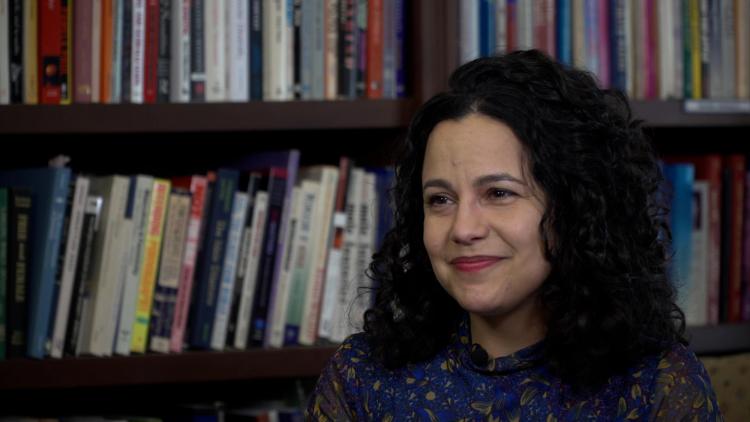 Marie Ranjbar, assistant professor of women and gender studies and an Iranian American, has been conducting research on social movements in Iran for the past decade, with an emphasis on feminist and environmental movements specifically around human and political rights. She explains the unprecedented nature of these protests, why the global community is responding the way it is and what could happen next.

How common are women-led protests in Iran?

Women have long been at the forefront of political activism in Iran. We’ve seen movements led by Iranian women dating back to the late 1800s with the Persian Tobacco Protest, followed by several movements in the 1900s, including nationalist movements in the 1950s and protests leading up the the 1979 Revolution. More recently, we’ve seen women at the forefront of the 2009 Green Movement and a number of anti-compulsory hijab protests.

This particular moment, where we’ve seen protests emerge that have been unprecedented in scale, has been the result of a near-universal experience of girls and women in Iran—with the “morality police” or state surveillance more broadly—having to constantly be attentive to what they look like in public in regard to how they wear their hijab.

What's really important to highlight in this moment is the involvement of young girls who have been incredibly brave in pushing back against the regime. The average age of protesters is 25, and the average age of arrested protesters is under the age of 20—which is alarming from a human rights perspective. It is also important to note this is led by the Gen Z generation, a generation that has no memory of revolts like the Iranian Revolution of 1979.

What is the symbolism behind the burning of the hijab?

One of the common misconceptions we’ve seen during these protests is that the burning of the hijab is somehow a rejection of Islam. Instead, it is really a pushback against an authoritarian regime that is imposing a particular politicized version of Islam on women's bodies as a symbol of the state. This is really an issue of bodily autonomy—which should be more familiar to those of us in the U.S., particularly with the overturn of Roe v. Wade. Protesters are focused on exercising freedom of choice in how they are able to appear in public space without being harassed by “morality police.”

How else are Iranian women protesting?

A powerful symbol of these protests includes the cutting of hair. These actions are a very courageous act of not only rejecting state surveillance of how women's hair has to be covered but really underscoring the bravery of Iranian women that goes back centuries.

Another really important and potent symbol of these protests is the chant that has now gone viral: “Zan. Zendegi. Azadi,” which means “Women. Life. Freedom.” We're really seeing the centrality of women's rights in this movement, which is incredibly powerful, aspirational and inspiring.

What has propelled these recent protests into the global spotlight?

One of the reasons previous women-led protests in Iran did not receive global attention is because the U.S. and the West more broadly is primed to think about Iranian and Middle Eastern women as already oppressed, and the veil tends to be the symbol of that oppression. While the hijab is an important flashpoint for these protests, again, it's important to remember that the pushback against the veil is against mandatory or compulsory veiling—not about the hijab itself.

What may make this particular movement more notable to the West is that these protests in Iran parallel the current moment that we're experiencing in the U.S. with the overturning of Roe v. Wade. Women and feminists in the United States are thinking about state surveillance of women's bodies, about reproductive justice and about who legislates our right of choice and how women are able to traverse public and private space. This is a moment of global solidarity, a unified transnational uprising to reclaim women's bodily autonomy.

We’ve also seen men on the frontlines of these protests. How significant is that?

What is unprecedented at this moment—and I've been conducting research in Iran on social movements for over a decade—is, for the first time, we are seeing men in mass marching alongside girls and women also demanding women's rights. Part of that is advocating for women’s life and freedom, but we’re also seeing chants across the country against women's oppression. We’ve seen other chants that have been appropriated from the Iranian revolution, that used to focus on protecting and avenging brothers, now emphasizing protecting and avenging sisters.

What could happen next?

We don't know what the outcome of these protests will be, and we have yet to see how the Iranian state will fully respond. So far, they've responded with tear gas, with firing live ammunition on protesters, mass detentions and trials. While deeply worrying, I think that many scholars of Iran tend to agree that this moment feels different. We see definite cracks in the regime that we haven't seen with previous movements.

Protesters have made a lot of gains, including turning this into a transnational movement with global solidarity—that also feels unprecedented. At this moment, the most urgent thing to do is to keep the spotlight on the regime and ensure that there is accountability and repercussions for any more human rights abuses that unfold.

Seventy-eight years ago on Jan. 27, the Auschwitz concentration camp closed after liberation by the Soviet army. Professor Janet Jacobs, who researches genocide, trauma and collective memory, discusses the ways in which the experiences and trauma of Holocaust survivors are passed down through generations. END_OF_DOCUMENT_TOKEN_TO_BE_REPLACED

A model of your very own kidney made entirely from soft and pliable polymers? Researchers at two CU campuses are on the cusp of 3D printing realistic replicas of human anatomy. END_OF_DOCUMENT_TOKEN_TO_BE_REPLACED

Legalizing recreational cannabis does not increase substance use disorders or use of other illicit drugs in adults and may reduce alcohol-related problems, according to new research. The study also found no link between cannabis legalization and increases in cognitive, psychological, social, relationship or financial problems. END_OF_DOCUMENT_TOKEN_TO_BE_REPLACED
Return to the top of the page