An audience of mostly students listens to the crew of Polaris Dawn during a campus event Monday. Photo by Casey A. Cass/CU Boulder.

Four crew members of Polaris Dawn, including a CU Boulder engineering alumna, came to campus this week to discuss the science they will conduct throughout the mission in addition to answering questions and share stories with students. The visit comes nearly four months before the crew’s historic space mission is scheduled to launch from NASA’s Kennedy Space Center in Florida.

Polaris Dawn, the first of the Polaris Program’s three human spaceflight missions, will conduct 38 science and research experiments while in orbit. The research is designed to advance both human health on Earth and our understanding of human health during future long-duration spaceflights. Polaris Dawn crew members will also attempt the first-ever commercial spacewalk and attempt to reach the highest Earth orbit ever flown. They also will become the first crew to test Starlink laser-based communications in space, providing valuable data for future space communications systems necessary for human spaceflight missions to the moon, Mars and beyond. 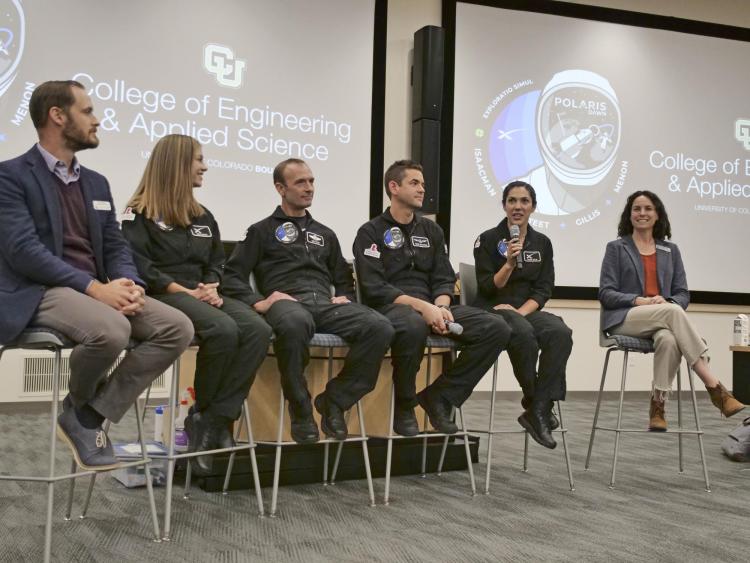 “We all very much believe in a world where everyone is going to have an opportunity to go into space,” said Isaacman, who previously traveled to space as part of Inspiration4 mission in 2021.

In Boulder, the crew joined two CU Boulder researchers on a panel: Allie Anderson and Torin Clark, assistant professors of aerospace engineering sciences, who are leading five of the scientific experiments that will fly on Polaris Dawn.

The six space buffs talked about smart contact lenses, space motion sickness and why living on Mars will be like nothing humans have encountered before.

We have done a lot of training focused on the technical details of the Dragon spacecraft. Then we've layered on top of that a lot of different environmental experiences to help us build team cohesion and also teach ourselves about our bodies’ responses to different environments. We went scuba diving to start experiencing the different changes in pressure environments that we will encounter when we do a spacewalk.

We climbed a nearly 20,000-foot mountain to get comfortable being uncomfortable together. We want to make sure that we can sit in a small can together for five days.

What we're trying to do is expand access to space for all. On Inspiration4, Hayley Arceneaux was the first person to fly with a prosthesis. For anyone who has disabilities, the space environment allows you to live in an entirely different way.

On our flight, we're going to be wearing glucose monitors for the full duration of the mission. About 10% of the U.S. population is diabetic, and that shouldn't disqualify you from flight as long as we can make sure that you can handle that well in space.

A lot of what we're interested in is how our sensory systems and the brain interpret gravitational cues as you go from here on Earth, where there's gravity, to being in space where you're in a microgravity environment. We have one experiment that is looking at what sort of unexpected or illusory sensations the crew might experience when they go into microgravity.

We're also interested in the reverse of that: What are the sensations people face when they come back to Earth and transition from being adapted to microgravity to now experiencing the gravity-rich environment here on Earth?

Allie Anderson on exploring spaceflight associated neuro-ocular syndrome (SANS), a condition that can seriously affect the eyesight of astronauts

Essentially, the eye changes in space—it gets flattened from behind, and we have structural damage that you see to the eye itself, as well as to the nerve that goes from the brain to the eye.

To study that, we're flying two pieces of equipment in collaboration with our partners. We’re flying a device called the Quick See, which measures peoples’ refractive error, so what prescription somebody might need. We're also flying a device called the Triggerfish. It has a contact lens with an antenna in it, and it allows us to look at how the cornea, the front part of the eye, changes its shape, which tells us something about pressure in the eye.

Scott Poteet on what it’s like, as a former fighter pilot in the U.S. Air Force, to fly a vehicle that’s largely autonomous

Coming from fighters, I have a control issue. I want to control as much as I possibly can. But the direction we're going in the evolution of space travel, it's autonomous. It's the natural progression of most machines. I also think there is a lot of carry-over from flying fighters and other types of aircraft—the situational awareness, maintaining sensory management, understanding the information and how to interpret it, and communicating not only to your crew but everyone on the ground. I think these skillsets are still applicable and will be in the future.

Jared Isaacman on the prospect of living on Mars

What happens when a child is born in a reduced gravity environment? What does that set them up for? Today, not even a minor surgery has been done in space let alone a Cesarean section. If you live on Mars, Earth isn’t a blue marble like when you’re looking back from the moon. It’s a tiny, blue speck. You’re not two days or 24 hours from coming home from space. You’re six to nine months from coming home if something’s gone wrong.

I say all this because you’re all pursuing an academic path in aerospace. There are a million, real problems that people are going to have to put energy toward in a number of fields if having a sustainable population on another planet tis going to be even remotely possible.

The historic spacecraft soon hit Earth's atmosphere flying at speeds of almost 25,000 mph. CU Boulder aerospace engineer Iain Boyd breaks down what will happen to the capsule, and how NASA will keep it safe on reentry. END_OF_DOCUMENT_TOKEN_TO_BE_REPLACED

A first-of-its-kind sensor, developed by a team at the Laboratory for Atmospheric and Space Physics, will measure sunlight reflecting from Earth with more accuracy than any instrument in space or on the ground. END_OF_DOCUMENT_TOKEN_TO_BE_REPLACED

NASA’s Orion spacecraft blasted off this morning from Florida in the first stage of its 25-day journey to circle the moon and return to Earth. Two CU Boulder scientists talk about what lies in store for the space agency’s ambitious Artemis Program. END_OF_DOCUMENT_TOKEN_TO_BE_REPLACED
Return to the top of the page