How many bees can you fit in an X-ray machine? That's not a joke 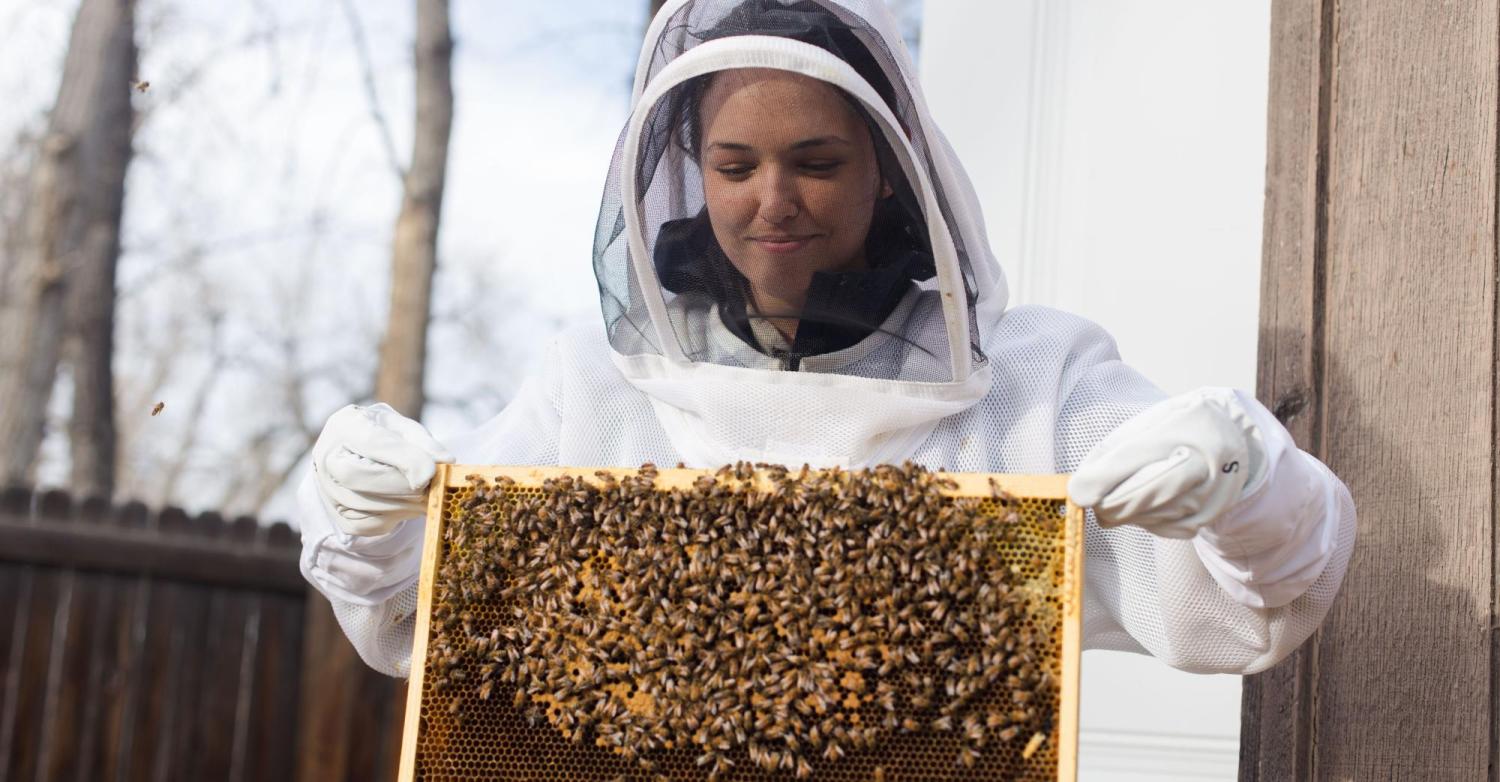 Orit Peleg holds up a tray of bees in an apiary on the CU Boulder campus. (Credit: Peleg Lab at CU Boulder)

Researchers at CU Boulder have, for the first time, used X-ray computed tomography (also known as a CT scan) to peer inside swarms of honeybees.

The scans provide a deeper look at these humble insects: Bees, the group discovered, don’t clump together in a random group. Instead, they seem to form dome-shaped structures following surprisingly sophisticated mathematical rules, or what researchers call a “scaling law.” The results could one day help engineers design more resilient buildings, or even swarms of tiny robots that behave a lot like insects, said study senior author Orit Peleg. 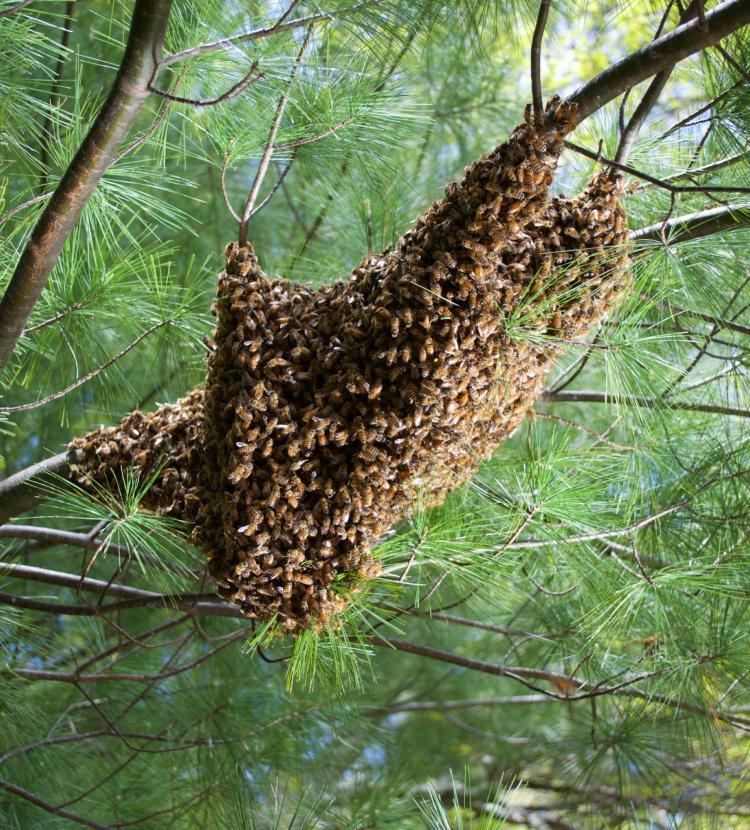 And bees can achieve all this despite having brains the size of grains of sand.

“I’m trained in physics, and these laws aren’t obvious to me,” said Peleg, assistant professor in the BioFrontiers Institute and Department of Computer Science at CU Boulder. “But bees somehow know how to arrange themselves in order to maintain their mechanical stability.”

The group published their results Oct. 17 in the journal Scientific Reports.

Getting bees to sit still for their X-rays took some work, noted Olga Shishkov, lead author of the study and a postdoctoral researcher in the Peleg Lab at BioFrontiers.

First, the researchers relied on honeybee queens to coax thousands of worker bees to join into swarms in the lab—these structures, which often hang upside-down, look a bit like a wriggly Jell-O mold. Then, the team rotated those swarms in front of a small CT machine originally developed for veterinary hospitals.

The effort was a success: The group’s method is so precise you can pick out individual bees in the 3D scans. The images could give scientists a new tool for understanding how bees and other social insects create such shapeshifting “superorganisms.”

“One thing we want to know is how the bees respond to different temperatures,” Shishkov said. “If it’s cold outside, how do they keep the inside of the swarm warm? If it’s hot, how do they stay cool?”

It begins with an intrepid journey: Peleg explained that when honeybee hives become too crowded, bee queens will fly away to search for another place to live. The queens bring thousands of worker bees with them, which will occasionally cluster around the queen to keep her safe—a buzzing, undulating security detail.

“You can find these swarms hanging from almost any kind of surface from trees to benches and cars,” Peleg said. “They’re magnificent little assemblies.”

They’re also really flexible. In a previous study, for example, Peleg and her colleagues shook swarms of bees to try to mimic the force of a gust of a wind. In response, the bees flattened out into a pancake shape, helping them stay stable amid the tumult.

One thing, however, has eluded Peleg’s team: “Until now, we haven’t been able to peek inside a swarm and see what’s happening.”

Put the weight on me

To do that, the group, including CU Boulder undergraduate students Claudia Chen and Claire Allison Madonna, scanned 11 swarms of bees containing anywhere from 4,000 to 10,000 insects.

Based on the researchers’ calculations, a bee swarm works a bit like a cheerleading pyramid. More bees cluster around the base of the swarm, then thin out the farther up they get. Bees also seem to arrange themselves so that no one layer has to carry more than its fair share of weight. In mathematical terms, the structure follows a scaling law in which each layer supports a weight that equals roughly its own weight to the one-and-a-half power.

“What this scaling law means is that each layer winds up using the same amount of its available strength as every other layer,” Shishkov said.

In the same study, Shishkov and her colleagues tested bees to calculate just how much weight a single honeybee could carry. A bee, it turns out, can lift about 35 other bees, on average. Bees in a swarm, in contrast, only lift a maximum of about four other bees.

Scaling laws like the one the team discovered are common in nature, explained study co-author Kaushik Jayaram. Among human weightlifters, for example, how many dumbbells you can lift tends to vary based on how much you weigh—a relationship that follows a surprisingly consistent mathematical formula.

“The same kind of laws seemingly apply to bees,” said Jayaram, assistant professor in the Paul M. Rady Department of Mechanical Engineering. “The existence of this scaling law hints that there might be general principles of organization for structures like these that we don’t know about yet.”

Shishkov, for her part, enjoyed working with the bees—without any supplies of honey to protect, the little insects didn’t sting her (too much).

“They're surprisingly friendly in a swarm,” Shishkov said.

What happens when an expert on natural language processing asks a chatbot to write a children's book in the style of Dr. Seuss? Professor Kai Larsen put the question to the test. END_OF_DOCUMENT_TOKEN_TO_BE_REPLACED

A model of your very own kidney made entirely from soft and pliable polymers? Researchers at two CU campuses are on the cusp of 3D printing realistic replicas of human anatomy. END_OF_DOCUMENT_TOKEN_TO_BE_REPLACED

For people who are blind or visually impaired, finding the right products in a crowded grocery store can be difficult without help. A team of computer scientists at CU Boulder is trying to change that. END_OF_DOCUMENT_TOKEN_TO_BE_REPLACED
Return to the top of the page