Perseverance looks back over its tire tracks in March 2022. (Credit: NASA/JPL-Caltech)

CU Boulder geologist Lisa Mayhew is among the scientists working to recreate the history of an ancient landscape that wouldn’t look out of place in Utah—only this terrain sits on Mars millions of miles from Earth.

Mayhew is a member of the science team for NASA’s Mars 2020 mission, which is led by the Jet Propulsion Laboratory in southern California. In August, she and her colleagues published some of the first sets of results from the Perseverance rover’s exploration of the Red Planet.

The findings take a deep look at Jezero Crater. More than 3 billion years ago, a large asteroid struck Mars, forming this geologic feature that stretches almost 30 miles across and contains rolling sand dunes and craggy cliffs. Using a suite of scientific instruments aboard the Perseverance rover, which is about the size of an SUV, the researchers have begun to explore that landscape’s past—showing how igneous rock forms the crater floor and how water reshaped the rocks during a time when a vast lake likely filled this region.

“We have a lot of information from orbit informing what we think the geology, minerology and chemistry of Mars may be,” said Mayhew, a research associate in the Department of Geological Sciences at CU Boulder. “But taking a rover there is an incredibly valuable tool to make sure we actually understand what’s happening.”

The new results are a coup for that intrepid machine. The more than 1-ton Perseverance landed on Mars on Feb. 18, 2021. It and Mayhew have been busy ever since. Over more than 570 Martian days, or “sols,” the rover has explored nearly 8 miles of the planet’s surface. The new studies focus on Perseverance’s first year, which the rover spent investigating geologic formations and features along the crater floor, including two named Máaz and Séítah.

Mayhew, who had previously only studied rocks on Earth, sees the mission as a chance to stretch her skills as a geologist and, at least vicariously, set her feet on another world.

“I realize sometimes just how crazy it is that I do what I do,” she said. “I’m really appreciative that I’ve had the opportunity to be part of this groundbreaking science.”

Jezero Crater may look dry and dusty today, but more than 3 billion years ago, it would have been almost unrecognizable. Here, water pouring in from an inlet fed a lake that grew and shrank in size over the eons.

Mayhew and her colleagues are trying to flesh out the timeline of that wetter past. 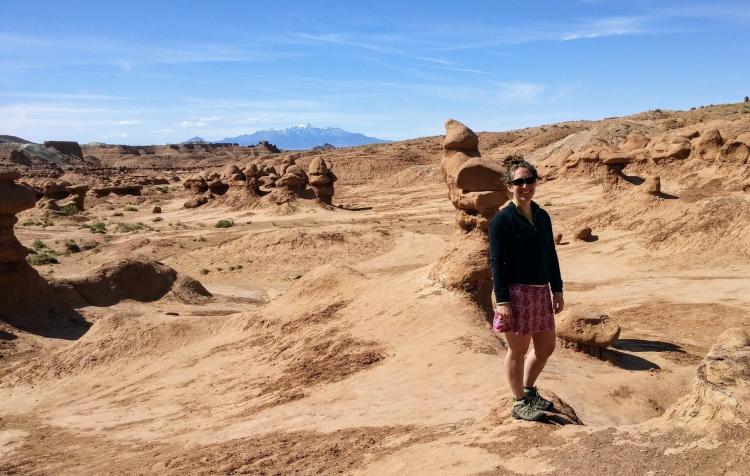 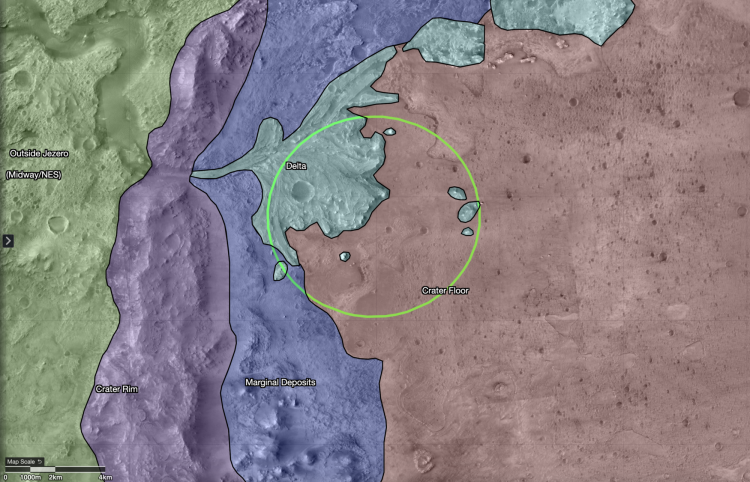 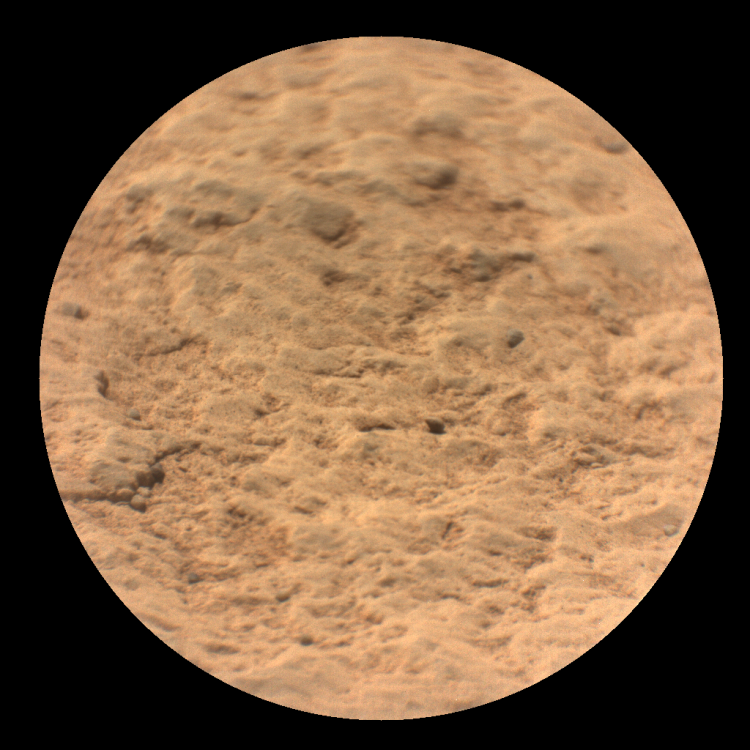 The team’s first set of findings home in on two geologic formations, in particular: Máaz, Navajo for “Mars,” a feature that appears to overlie the larger Séítah, Navajo for “among the sand.” To study this terrain, the researchers relied on several instruments aboard Perseverance, including SuperCam. This swiveling instrument sits on top of the rover and uses laser light to quantify elements and identify minerals present in various rocks.

Mayhew is a co-author on two papers led by Ken Farley of the California Institute of Technology and Roger Wiens of Los Alamos National Laboratory detailing Perseverance’s first year on Mars. The studies were published on Aug. 25 in the journals Science and Science Advances. Other research teams published more findings from the mission at the same time.

The group’s results point to a surprising origin for these formations: A body of hot, molten rock may have existed at the crater floor, settling and cooling in several stages, potentially forming both Séítah and Máaz. Alternatively, Máaz may also have formed when separate lava flows moved into the crater.

“One idea is that this was a single body of rock formed from magma cooling underground,” Mayhew said. “But another model is that Máaz may have been formed separately by lava actively flowing on the surface of Mars.”

The project touches on a question that has motivated much of her decades-long career: How does life carve out an existence in some of the most unlikely places on our planet?

In 2007 and 2008, Mayhew sailed on research cruises that collected rocks from the bottom of the Pacific and Atlantic oceans to learn more about microbial life in hydrothermal systems. In 2015 she participated in an International Ocean Drilling Program research cruise that drilled down into the subsurface of a hydrothermal system to access actively reacting rocks. At these sites, rocks react with water and produce chemicals such as hydrogen gas—nutrients that support vibrant communities of microbes that can, in turn, support more complex life such as crustaceans and other invertebrates.

“My research has always addressed how water alters rocks and how that process can support life,” Mayhew said.

To find out if rocks in Jezero may have supported life billions of years ago, Mayhew and her colleagues will need to take a much closer look at these chunks of Mars—under the microscope in labs on Earth.

During its mission, she explained, Perseverance is using a drill to excavate roughly 40 Martian geologic samples, storing them in sealed tubes. NASA is working with the European Space Agency (ESA) on separate missions that will travel to Mars to pick up 30 of those tubes and bring them back to Earth.

Mayhew is one of 15 scientists on the mission’s Return Sample Science team. She and her colleagues work with other team members and Perseverance’s operators to decide which rocks the rover should collect. To date, the team has filled 13 of its sample tubes, 12 with rocks and one with a sample of atmosphere, with plans to collect more rock samples soon. The team has also sealed two “witness” tubes to collect dust and particles in the atmosphere, allowing researchers to measure contamination that might be present during the sampling process.

Mayhew said that transitioning from an Earth-based geologist to a scientist working on an alien world has been tough but rewarding.

“It has felt like a big learning curve. I don’t have the background that a lot of people on the team have, especially those who have been working on rover missions since Opportunity and Spirit went up in the early 2000s,” Mayhew said. “I’m constantly trying to keep my ears open and learn from them.”

In March 2022, Perseverance left the crater floor for what may be the most exciting terrain of the mission—the delta. Here, the team will collect rocks that were deposited onto the crater floor when water once flowed on Mars.

Perseverance, and Mayhew, are showing no signs of stopping: “It’s a hectic schedule, and we have to keep moving.”

A first-of-its-kind sensor, developed by a team at the Laboratory for Atmospheric and Space Physics, will measure sunlight reflecting from Earth with more accuracy than any instrument in space or on the ground. END_OF_DOCUMENT_TOKEN_TO_BE_REPLACED

Ahead of the historic space mission, crew members joined CU Boulder researchers Allie Anderson and Torin Clark to talk about how the eye changes in space, experiencing "space motion sickness" and more. END_OF_DOCUMENT_TOKEN_TO_BE_REPLACED

NASA’s Orion spacecraft blasted off this morning from Florida in the first stage of its 25-day journey to circle the moon and return to Earth. Two CU Boulder scientists talk about what lies in store for the space agency’s ambitious Artemis Program. END_OF_DOCUMENT_TOKEN_TO_BE_REPLACED
Return to the top of the page