In less than a decade, technology developed in Colorado will travel to Jupiter’s moon Europa—a cold moon where a thick crust of ice covering the surface obscures a potentially vast ocean of saltwater below.

That piece of Rocky Mountain technology is the Europa SUrface Dust Analyzer (SUDA). The more than $50 million instrument was designed and built by a team of scientists and engineers at the University of Colorado Boulder’s Laboratory for Atmospheric and Space Physics (LASP). It’s part of NASA’s larger Europa Clipper mission, which will investigate the icy moon to determine if it has conditions that could support life.

LASP shipped SUDA this month to NASA’s Jet Propulsion Laboratory in southern California, which leads the mission. SUDA and eight other scientific instruments are set to launch in October 2024 aboard the Europa Clipper spacecraft, beginning a nearly five-and-a-half-year journey to Jupiter. There, it will conduct multiple flybys of Europa.

“SUDA is a remarkable instrument designed and constructed by remarkable people,” said LASP Director Dan Baker. “It builds on our lab’s rich heritage of dust instrumentation while incorporating new technologies and techniques developed just for this mission. We can hardly wait to see SUDA’s first results.”

The instrument’s sensor head, which is coated with an extremely thin layer of 99.99% gold, is about the size of a marching drum and weighs nearly 35 pounds. As Europa Clipper flies by the moon, SUDA will collect and analyze particles ejected from the moon’s surface by tiny meteorites. JPL scientist and SUDA co-investigator Murthy Gudipati compared the instrument to a shark swimming with its mouth open. Scientists can also use data from the instrument to track where on the surface those particles launched from.

“We will collect material from the surface, and we will do that without ever landing on the surface,” said Kempf, an associate professor at LASP and the Department of Physics at CU Boulder.

It’s also a monumental achievement for the dozens of researchers at LASP who have toiled since 2015, through a historic pandemic, to make the instrument a reality. 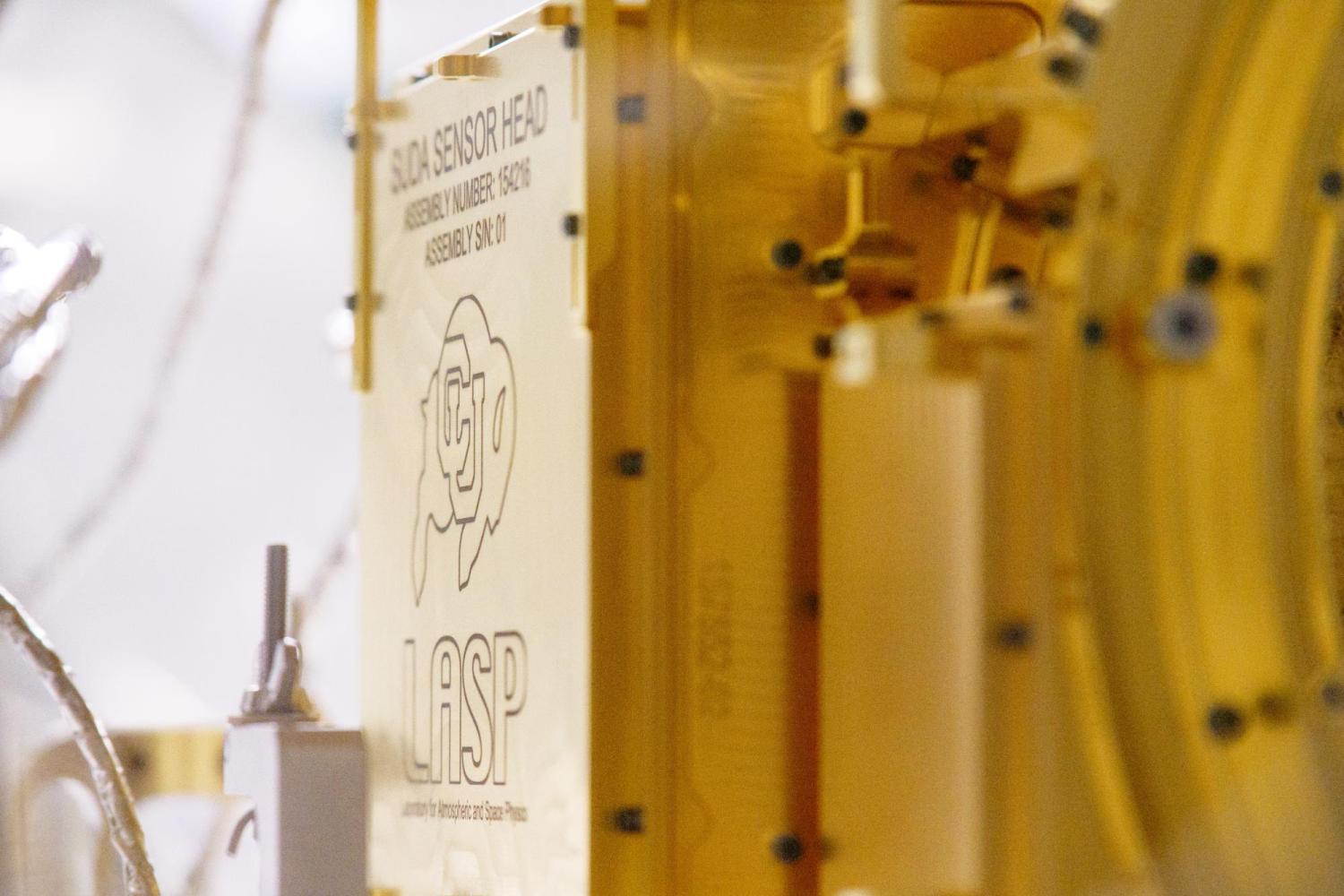 A panel located on the side of the sensor head for Europa Clipper’s dust analyzer. (Credit: NASA/LASP/CU Boulder) 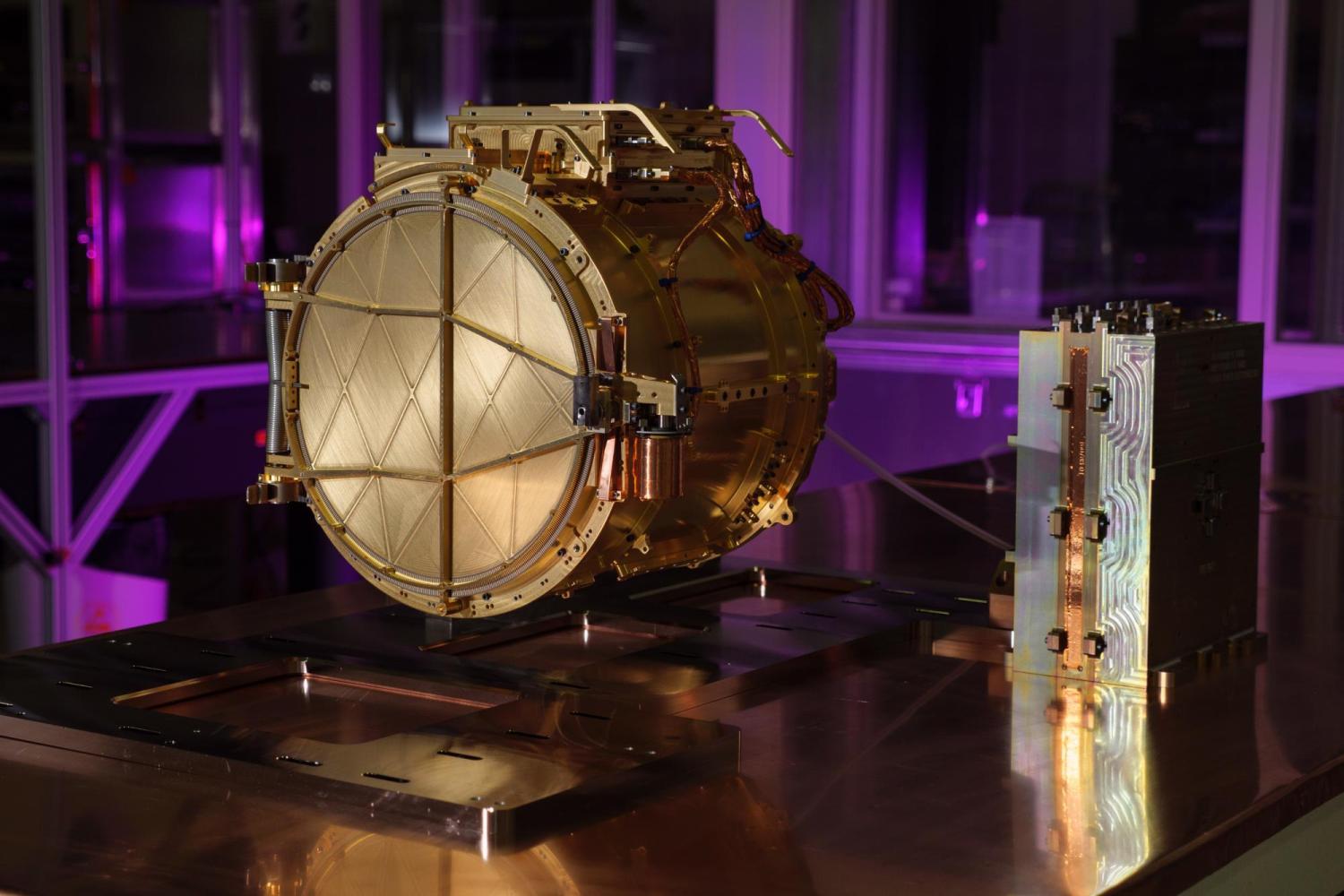 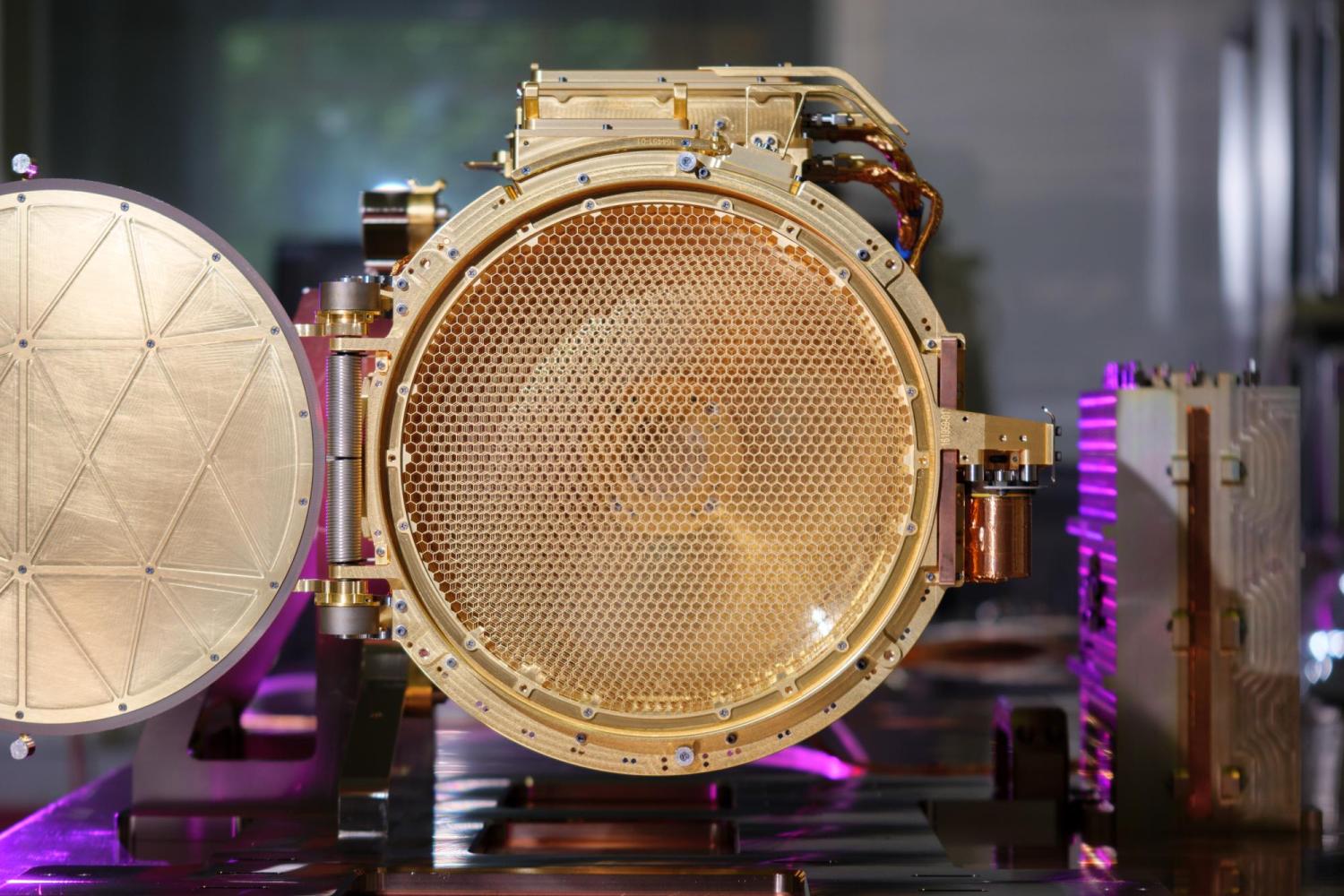 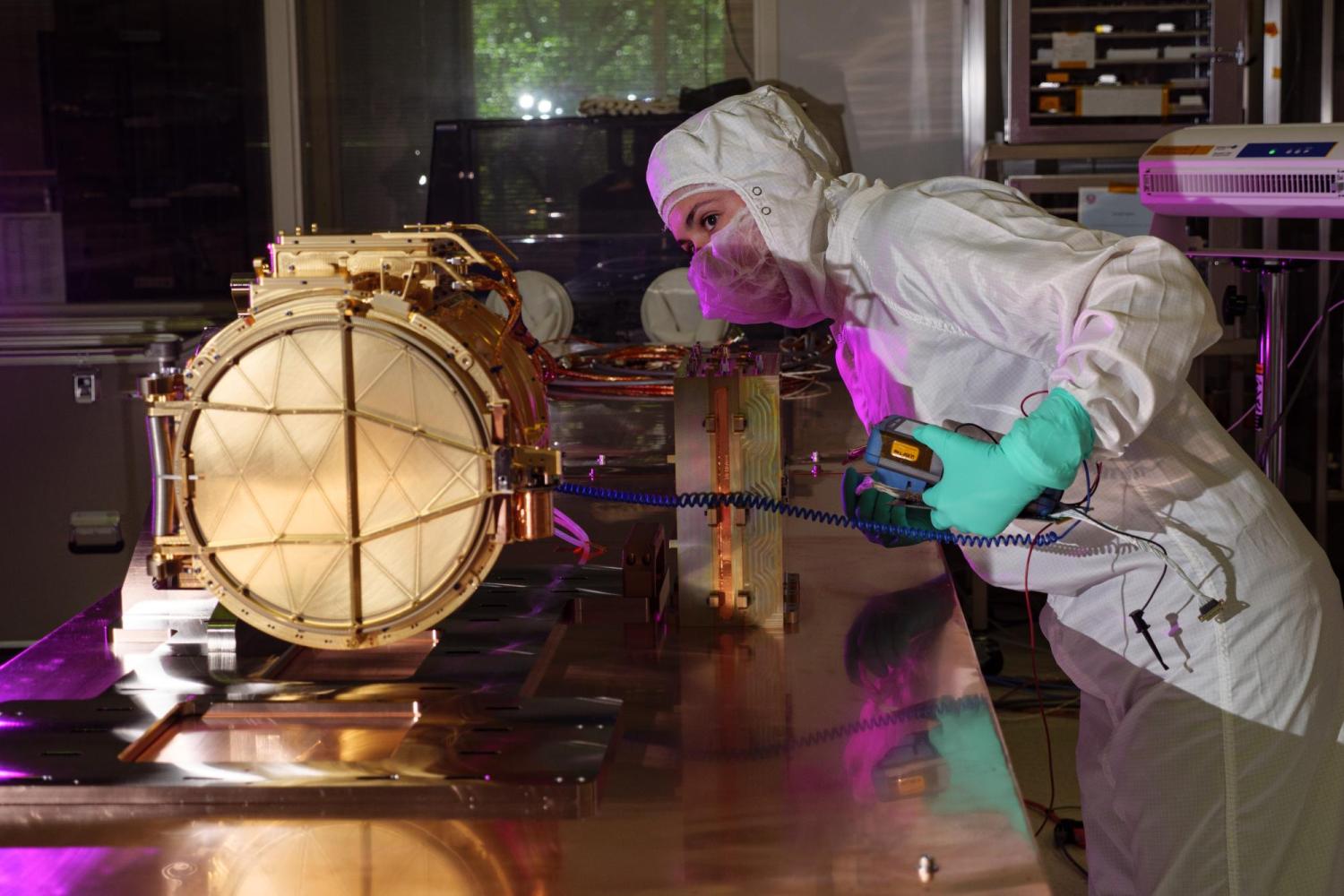 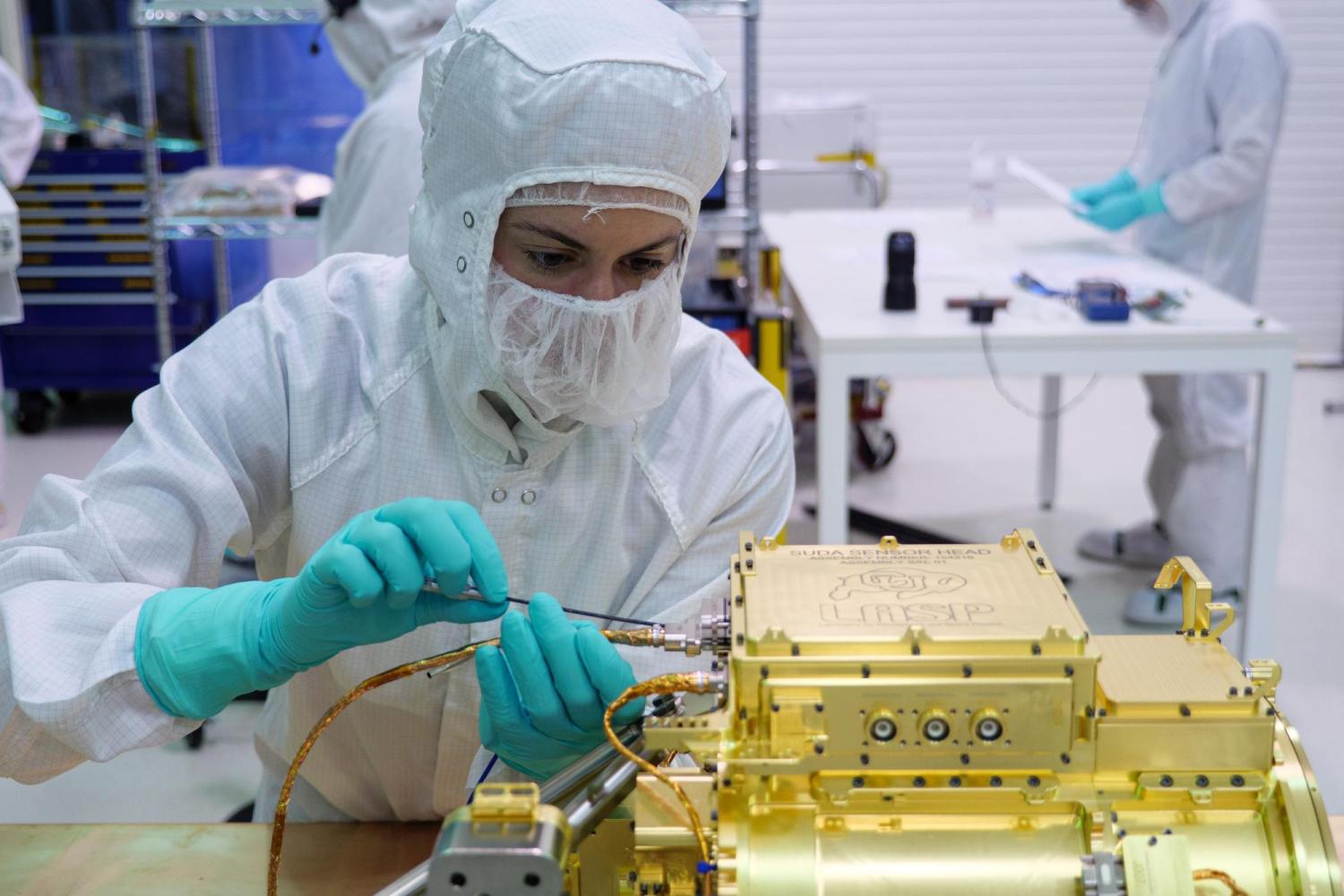 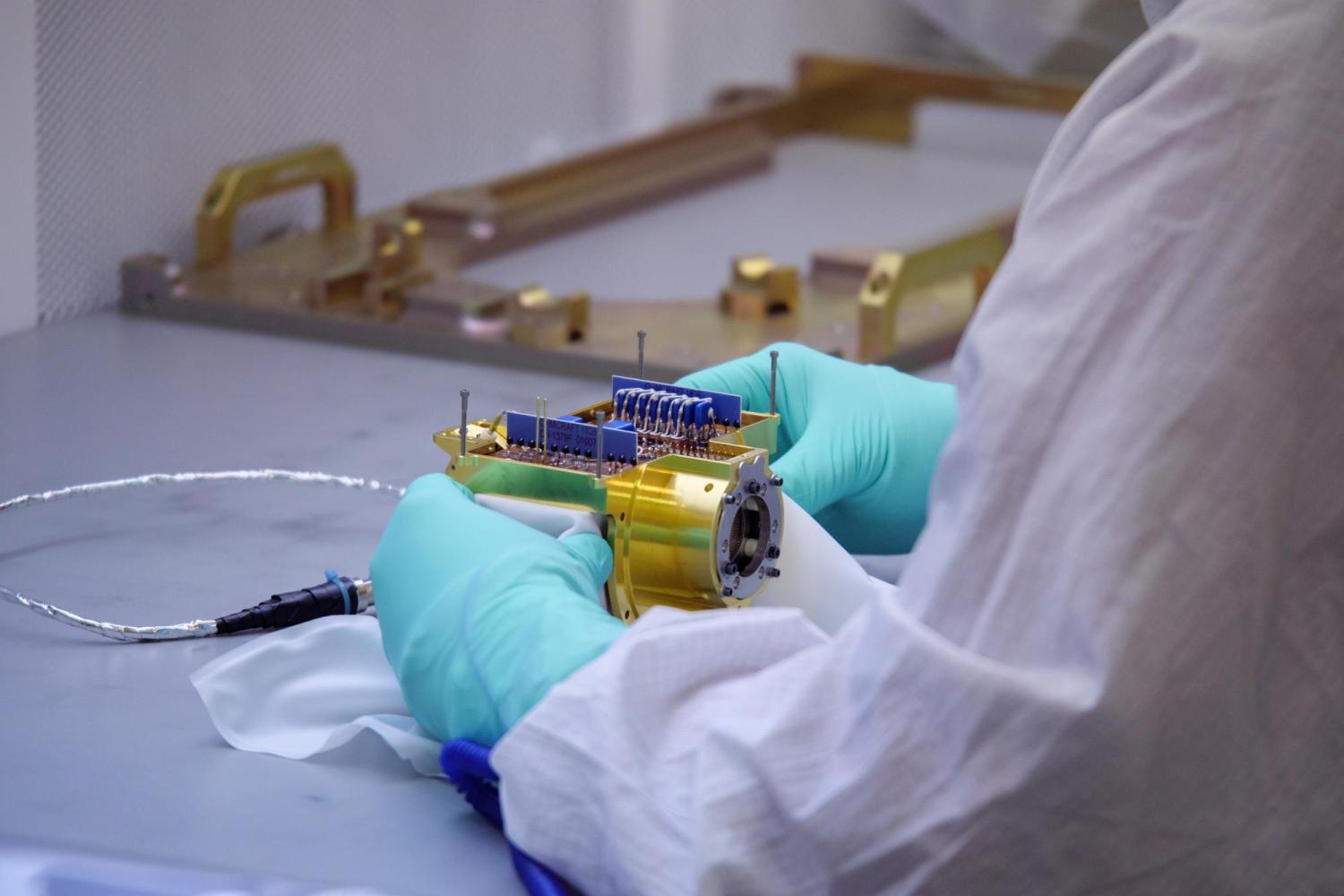 An engineer integrates an electronics board onto the ion detector for Europa Clipper’s dust analyzer. (Credit: NASA/CU Boulder/Glenn Asakawa) 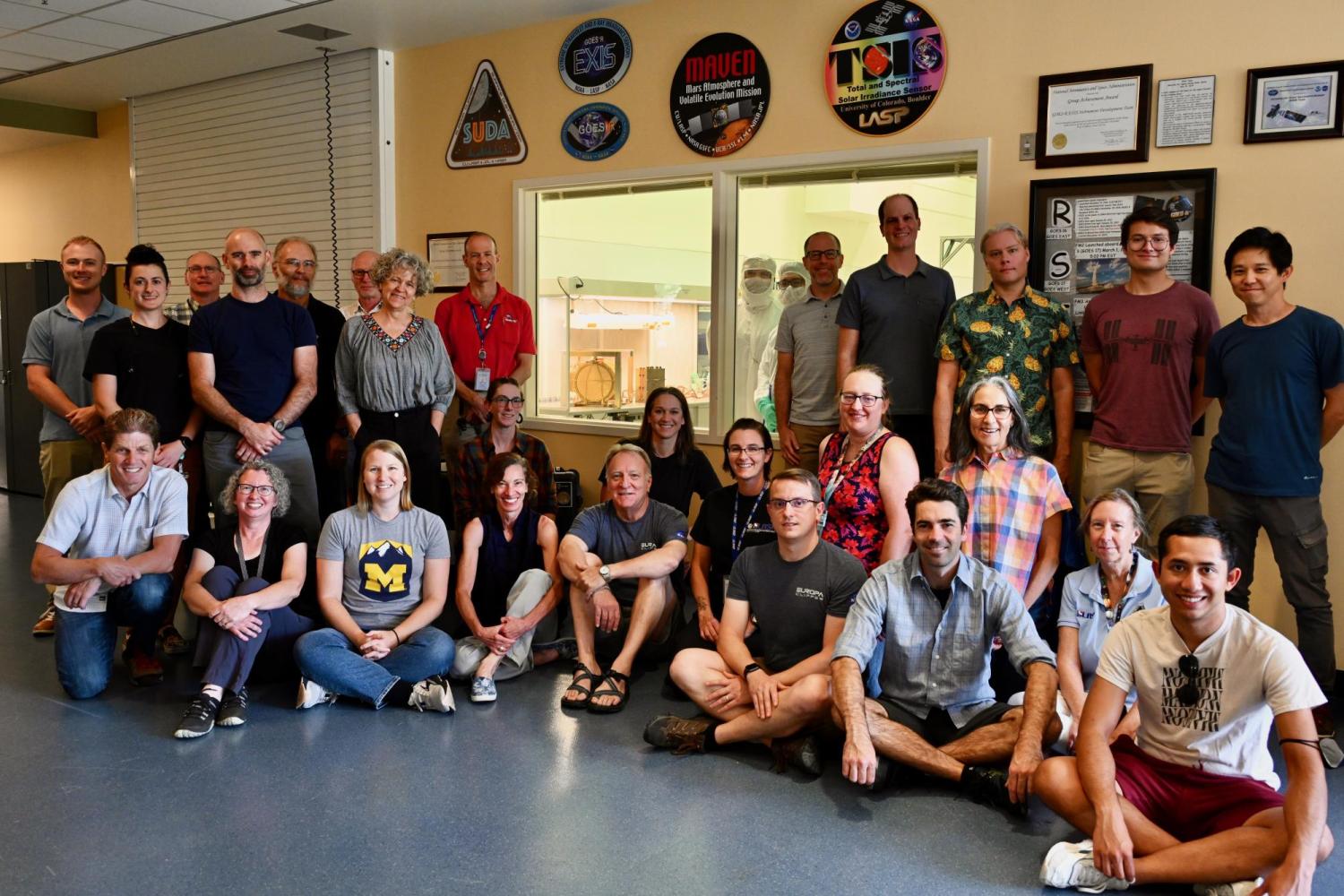 Members of the SUDA team at LASP pose for a photo in front of one of the institute's clean rooms in September 2022. (Credit: LASP) 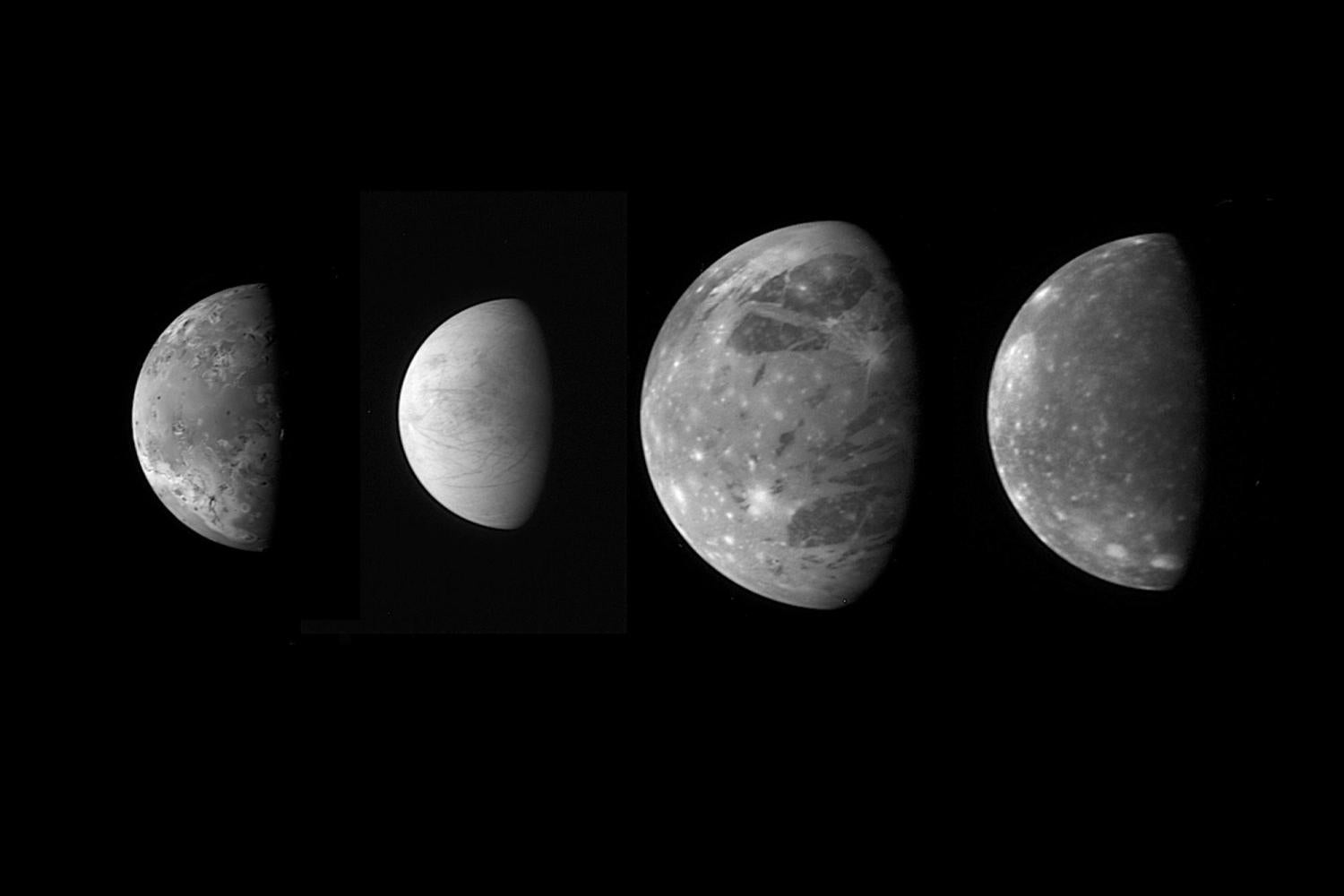 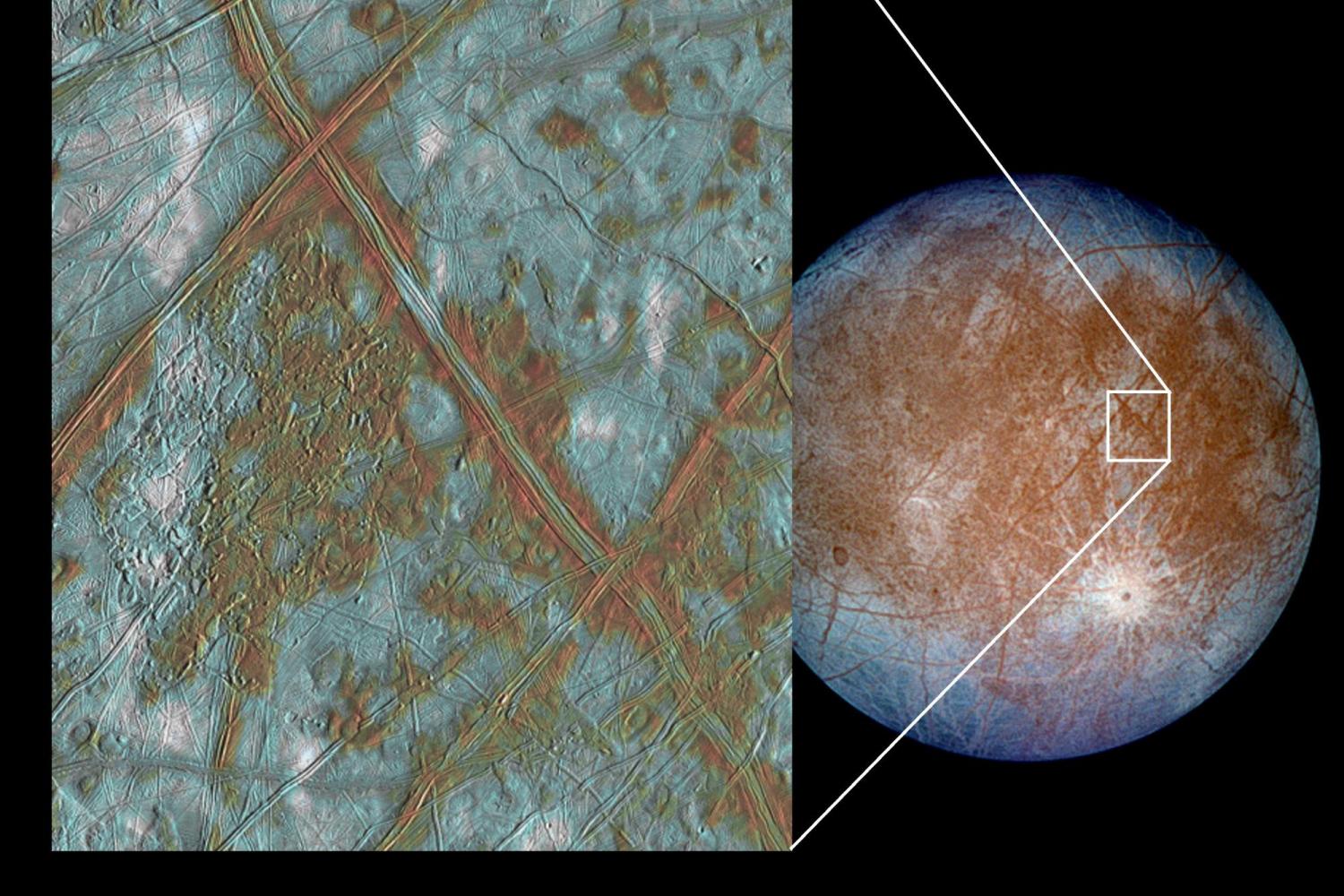 A region of Europa's crust made up of blocks which are thought to have broken apart and "rafted" into new positions. These features are the best geologic evidence to date that Europa may have had a subsurface ocean at some time in its past. (Credit: NASA/JPL/University of Arizona) 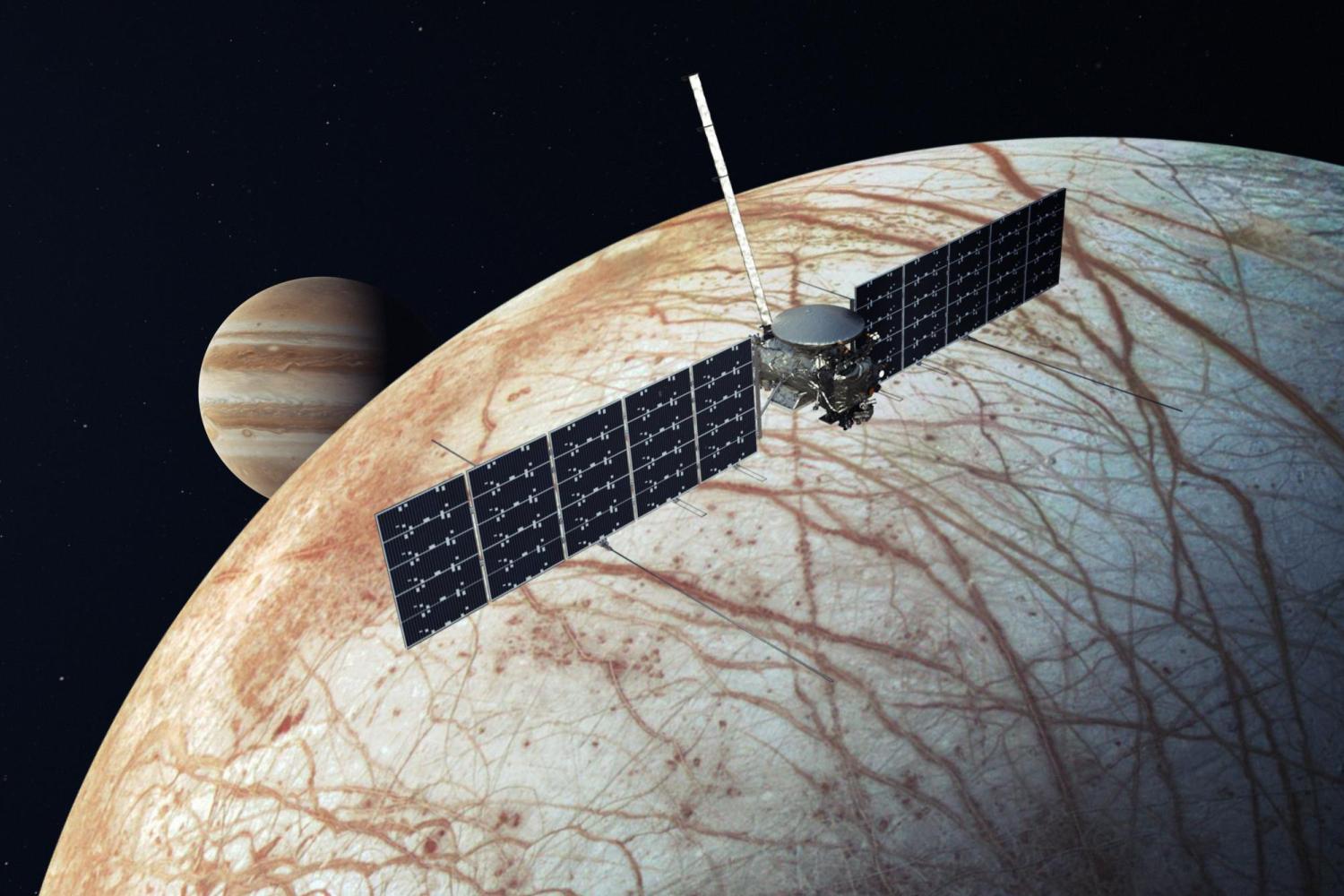 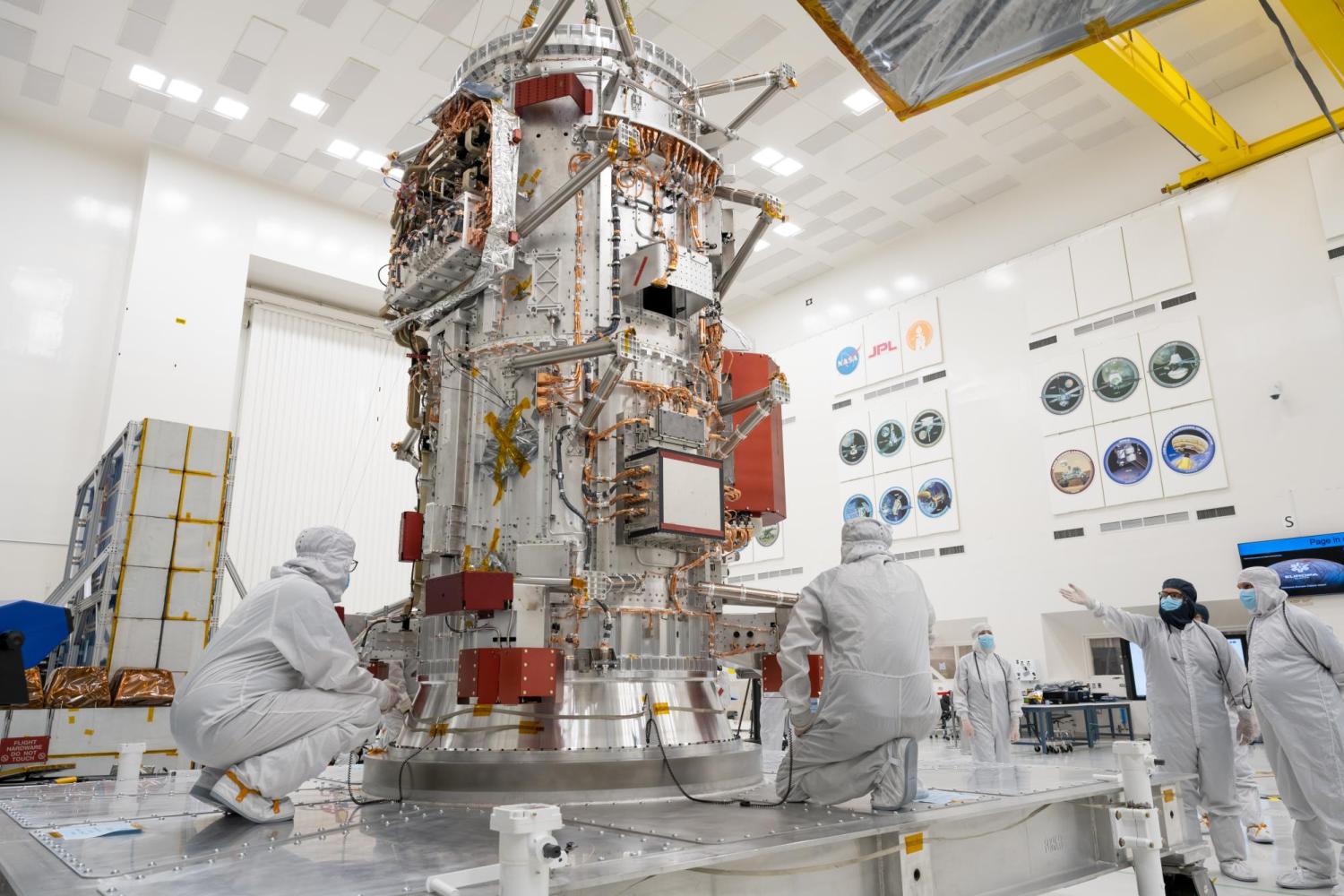 The core of NASA’s Europa Clipper spacecraft is shown in the Spacecraft Assembly Facility at the Jet Propulsion Laboratory in Southern California. (Credit: NASA/JPL-Caltech)

Scientists have long had their eyes on Europa as an important target in the search for life beyond Earth.

SUDA by the numbers

This ice-covered sphere is slightly smaller than Earth’s own moon, and only the fourth largest of Jupiter’s moons behind Ganymede, Callisto and Io. Underneath its miles-thick layer of ice, however, researchers suspect that Europa could hold more than twice the saltwater of all of Earth’s oceans combined—an ocean that might also carry ingredients necessary to sustain living organisms, including organic molecules like amino acids.

Europa Clipper is not a life-finding mission. But it will conduct a detailed investigation of the moon and, among other goals, determine if those key ingredients for life are present.

Scott Tucker, the SUDA project manager at LASP, explained that micrometeorites are constantly pinging the surface of Europa. In the process, they kick up tiny particles from the moon’s surface, sometimes ejecting bits of moon stuff several miles into space. Researchers estimate that roughly half a ton of material surrounds Europa at all times.

“There’s, essentially, a thin sphere of particles around the moon,” Tucker said. “It’s like Pigpen in the Peanuts comics with his cloud of dust.”

SUDA will use its wide mouth to capture those particles. These tiny grains will be moving at relative speeds of more than 10,000 miles per hour—so fast that when they hit the target that sits at the back of the instrument, they will vaporize on impact. SUDA collects the ions that escape from those collisions and measures them to determine exactly what the particles were made of.

The instrument is so sensitive that it can detect amino acids mixed in with ice at concentrations of about 1 part per million. Scientists can also use data from SUDA to pinpoint where on the moon those particles originated to within about 10 miles.

Getting SUDA to Europa, or even California, however, hasn’t been easy.

Over seven years, roughly 150 scientists and engineers at LASP have worked on the instrument, including about 40 undergraduate and graduate students.

To make sure that SUDA’s target could withstand all of those impacts from dust, the group partnered with researchers at JILA on the CU Boulder campus to coat this disk in a thin layer of iridium—one of the hardest and densest naturally-occurring metals on Earth.

Kempf added that SUDA is also a marvel of cleanliness. The team, he said, needs to be sure that SUDA will transport almost no contaminants from Earth to Europa. To achieve that feat, engineers from LASP heated the instrument to 239 degrees Fahrenheit for about 17 hours to kill off living organisms like bacteria. They also ran sterile nitrogen gas through SUDA while working with it to flush out unwanted contaminants from the air.

“We have to be able to demonstrate that the material we detect is from Europa and not from us,” Kempf said. “That’s why we drove our engineering team so hard with our handling procedures.”

The stress, however, will pay off once SUDA and Europa Clipper make it to the icy moon in 2031. When they do, the instrument will bring a symbol of Colorado with it—an image of Ralphie, CU Boulder’s buffalo mascot, which the SUDA team etched onto one of the instrument’s gold-plated panels using a laser.

“The chance to be a part of the discovery of an environment capable of supporting life beyond Earth is what has kept us going through COVID and everything else,” Tucker said. “There’s no immediate gratification with this mission, but it’s worth it knowing that we’re going to be part of something really amazing.”

CU Boulder has been selected as a member of the United States Space Command Academic Engagement Enterprise, a new national program designed to expand collaboration and academic exchanges between universities and Space Command. END_OF_DOCUMENT_TOKEN_TO_BE_REPLACED

Since July 2022, a miniature satellite about the size of a shoebox has been orbiting Earth and monitoring how much solar energy reaches the atmosphere, one of the "most important" Earth science measurements. Now, scientists are finalizing their analysis of the first five months of the testing. END_OF_DOCUMENT_TOKEN_TO_BE_REPLACED

The historic spacecraft soon hit Earth's atmosphere flying at speeds of almost 25,000 mph. CU Boulder aerospace engineer Iain Boyd breaks down what will happen to the capsule, and how NASA will keep it safe on reentry. END_OF_DOCUMENT_TOKEN_TO_BE_REPLACED
Return to the top of the page