The study, published Sept. 21 in the journal Nature, takes the most exhaustive look yet at the structure of the American professoriate—capturing data on nearly 300,000 tenure-track faculty (including where they received their own graduate degrees) at more than 10,000 university departments at 368 PhD-granting institutions from 2011 to 2020.

The study reveals that in all fields of academia, most professors come from a small number of institutions.

“We all know that academic pedigree is important—it’s the first thing professors put in their bios—but it’s hard to measure just how extreme the inequalities are in higher education until you actually analyze the data,” said Daniel Larremore, a co-author of the new study and assistant professor at the BioFrontiers Institute.

Take the five schools producing the most U.S. professors: the University of California, Berkeley; Harvard University; University of Michigan; University of Wisconsin-Madison; and Stanford University. These institutions, Larremore and his colleagues calculated, trained more U.S. faculty than all universities outside of the U.S. combined. Across academia, 80% of tenure-track faculty earned their doctorate degrees at just 20.4% of the nation’s universities.

The team’s findings also paint a potentially dim picture of trends in diversity across U.S. universities. The group discovered, for example, that while women faculty members are becoming more common in a wide range of academic departments, those gains may soon plateau. 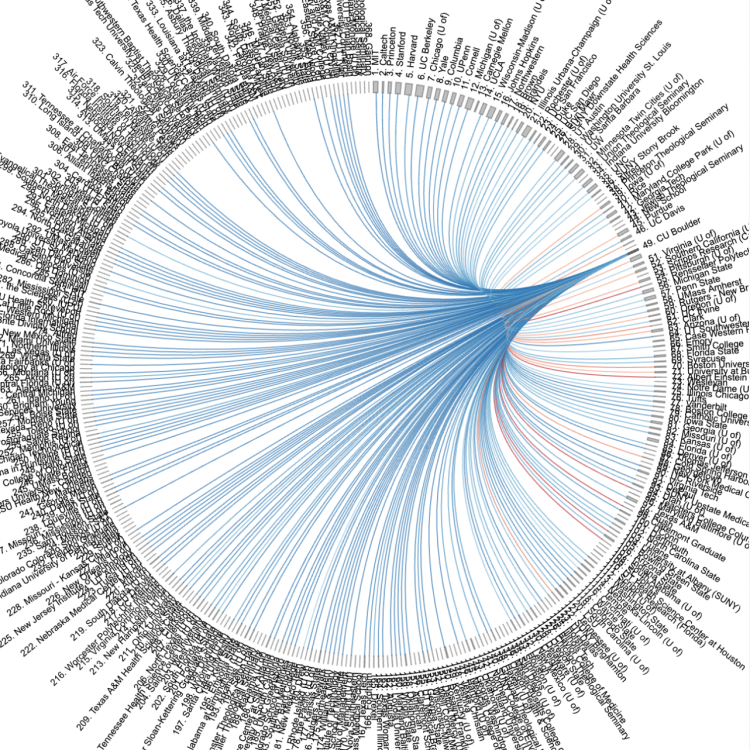 Click to enlarge
Graphic showing the flow of doctoral students trained at CU Boulder in all fields of study to the universities where they served as faculty members from 2011-2020. (Credit: Hunter Wapman & Daniel Larremore) 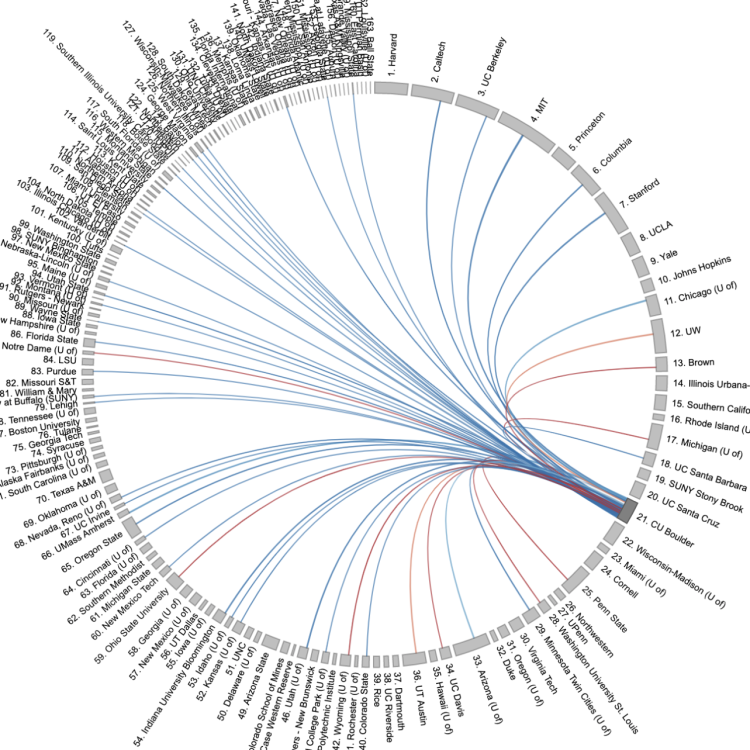 Click to enlarge
Graphic showing the flow of doctoral students from CU Boulder in the field of geology. (Credit: Hunter Wapman & Daniel Larremore)

“We should not expect to see gender parity in academia unless further initiatives and changes in hiring practices are made,” said Hunter Wapman, lead author of the paper and a doctoral student in the Department of Computer Science.

Larremore (who earned his own doctorate in applied mathematics from CU Boulder in 2012) added that he hopes U.S. universities will see the results as a wake-up call: “Quantifying and shedding light on these trends will help us change the system.”

Explore interactive visualizations of the findings

To inform that long process, Wapman, Larremore and their colleagues drew on data from the Academic Analytics Research Center to build a network of the flows of people between universities.

“We might see that Aaron Clauset works in the Department of Computer Science at CU Boulder,” Wapman said. “We also see where he got his PhD—in this case, the University of New Mexico.”

That datapoint creates a connection between CU Boulder and UNM like a spoke in a bicycle wheel, just one of hundreds of thousands in the team’s network.

By investigating that network, the team discovered that in the hallowed halls of academia, some halls are more hallowed than others: Academics who earned their degrees at less prestigious schools rarely got jobs at more prestigious institutions.

In computer science, for example, only 12% of faculty were able to get jobs at universities more prestigious than where they went to school—a number that plummeted to 6% in economics.

Those strict hierarchies also extended beyond the hiring process, Larremore added. Academics who got their graduate degrees from less prestigious schools also seemed to leave the field a lot more often than their counterparts from more elite institutions. So did professors trained outside the U.S., U.K. and Canada, or professors who worked at their doctoral alma mater.

“Many inequalities in the system are rooted in hiring, but they’re exacerbated by attrition,” he said.

The group found that women faculty are becoming more common in a wide range of university departments. Schools, however, aren’t hiring more women than they did a decade ago—men in academia are merely growing older, on average, and retiring more often.

Larremore, Wapman, and their colleagues aren’t sure yet how universities might use their findings. In a system where only a minority of universities train the vast majority of academics, it’s harder for new ideas and research to emerge and spread from less prominent institutions. On the other hand, the researchers note, those same, prominent institutions may also have an outsized ability to address the inequalities of academia’s past.

“Inequalities in academia have effects that we don’t always observe,” Wapman said. “There’s recent research showing that faculty tend to study topics related to their identities. If we are interested in solving the problems that real people face, we should want to have diverse body of academics.”

Seventy-eight years ago on Jan. 27, the Auschwitz concentration camp closed after liberation by the Soviet army. Professor Janet Jacobs, who researches genocide, trauma and collective memory, discusses the ways in which the experiences and trauma of Holocaust survivors are passed down through generations. END_OF_DOCUMENT_TOKEN_TO_BE_REPLACED

A model of your very own kidney made entirely from soft and pliable polymers? Researchers at two CU campuses are on the cusp of 3D printing realistic replicas of human anatomy. END_OF_DOCUMENT_TOKEN_TO_BE_REPLACED

Legalizing recreational cannabis does not increase substance use disorders or use of other illicit drugs in adults and may reduce alcohol-related problems, according to new research. The study also found no link between cannabis legalization and increases in cognitive, psychological, social, relationship or financial problems. END_OF_DOCUMENT_TOKEN_TO_BE_REPLACED
Return to the top of the page