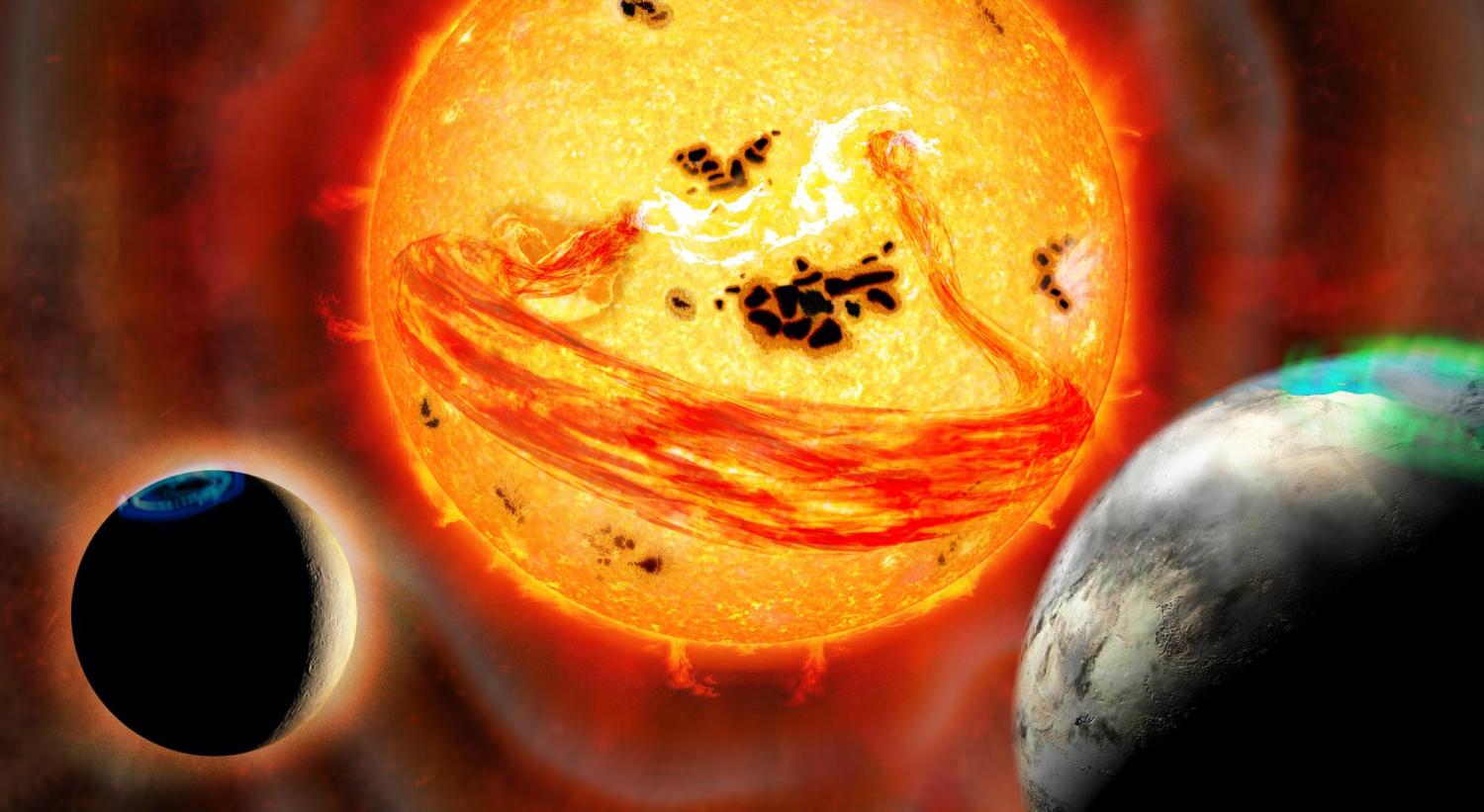 Astronomers spying on a stellar system located dozens of lightyears from Earth have, for the first time, observed a troubling fireworks show: A star named EK Draconis ejected a massive burst of energy and charged particles in an event that was much more powerful than anything scientists have seen in our own solar system.

The researchers, including astrophysicist Yuta Notsu of the University of Colorado Boulder, published their results Dec. 9 in the journal Nature Astronomy.

The study explores a stellar phenomenon called a “coronal mass ejection,” sometimes known as a solar storm. Notsu explained the sun shoots out these sorts of eruptions on a regular basis. They’re made up of clouds of extremely hot particles, or plasma that can hurtle through space at speeds of millions of miles per hour. And they’re potentially bad news: If a coronal mass ejection hit Earth dead-on, it could fry satellites in orbit and shut down the power grids serving entire cities.

“Coronal mass ejections can have a serious impact on Earth and human society,” said Notsu, a research associate at the Laboratory for Atmospheric and Space Physics (LASP) at CU Boulder and the U.S. National Science Foundation’s National Solar Observatory.

The new study, led by the National Astronomical Observatory of Japan’s Kosuke Namekata—formerly a visiting scholar at CU Boulder—also suggests the ejections can get a lot worse. 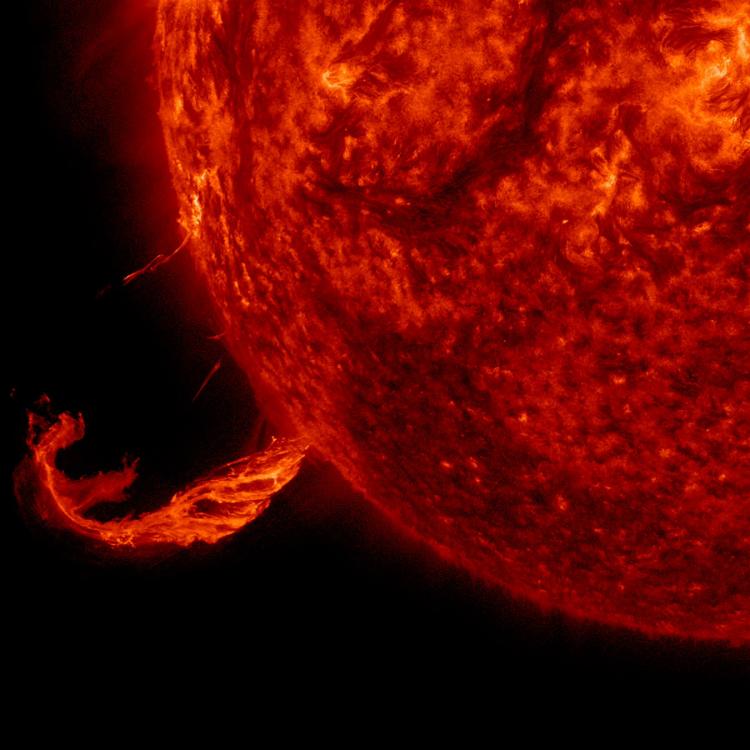 A coronal mass ejection seen erupting from the surface of Earth's sun in 2015. (Credit: NASA)

In the research, Namekata, Nostu and their colleagues used telescopes on the ground and in space to peer at EK Draconis, which looks like a young version of the sun. In April 2020, the team observed EK Draconis ejecting a cloud of scorching-hot plasma with a mass in the quadrillions of kilograms—more than 10 times bigger than the most powerful coronal mass ejection ever recorded from a sun-like star.

The event may serve as a warning of just how dangerous the weather in space can be.

“This kind of big mass ejection could, theoretically, also occur on our sun,” Notsu said. “This observation may help us to better understand how similar events may have affected Earth and even Mars over billions of years.”

Notsu explained coronal mass ejections often come right after a star lets loose a flare, or a sudden and bright burst of radiation that can extend far out into space.

Recent research, however, has suggested that on the sun, this sequence of events may be relatively sedate, at least so far as scientists have observed. . In 2019, for example, Notsu and his colleagues published a study that showed that young sun-like stars around the galaxy seem to experience frequent superflares—like our own solar flares but tens or even hundreds of times more powerful.

Such a superflare could also happen on Earth’s sun but not very often, maybe once every several thousand years. Still, it got Notsu’s team curious: Could a superflare also lead to an equally super coronal mass ejection?

“Superflares are much bigger than the flares that we see from the sun,” Notsu said. “So we suspect that they would also produce much bigger mass ejections. But until recently, that was just conjecture.”

To find out, the researchers set their sights on EK Draconis. The curious star, Notsu explained, is about the same size as our sun, but, at just 100 million years old, it’s a relative youngster in a cosmic sense.

“It’s what our sun looked like 4.5 billion years ago,” Notsu said.

The researchers observed the star for 32 nights in winter and spring 2020 using NASA’s Transiting Exoplanet Survey Satellite (TESS) and Kyoto University’s SEIMEI Telescope. And on April 5, Notsu and his colleagues got lucky: The researchers looked on as EK Draconis erupted into a superflare, a really big one. About 30 minutes later, the team observed what appeared to be a coronal mass ejection flying away from the star’s surface. The researchers were able to catch only the first step in that ejection’s life, called the “filament eruption” phase. But even so, it was a monster, moving at a top speed of roughly 1 million miles per hour.

It may also not bode well for life on Earth: The team’s findings hint that the sun could also be capable of such violent extremes. But don’t hold your breath—like superflares, super coronal mass ejections are probably rare for our getting-on-in-years sun.

Still, Notsu noted that huge mass ejections may have been much more common in the early years of the solar system. Gigantic coronal mass ejections, in other words, could have helped to shape planets like Earth and Mars into what they look like today.

“The atmosphere of present-day Mars is very thin compared to Earth’s,” Notsu said. “In the past, we think Mars had a much thicker atmosphere. Coronal mass ejections may help us to understand what happened to the planet over billions of years.”

A first-of-its-kind sensor, developed by a team at the Laboratory for Atmospheric and Space Physics, will measure sunlight reflecting from Earth with more accuracy than any instrument in space or on the ground. END_OF_DOCUMENT_TOKEN_TO_BE_REPLACED

Ahead of the historic space mission, crew members joined CU Boulder researchers Allie Anderson and Torin Clark to talk about how the eye changes in space, experiencing "space motion sickness" and more. END_OF_DOCUMENT_TOKEN_TO_BE_REPLACED

NASA’s Orion spacecraft blasted off this morning from Florida in the first stage of its 25-day journey to circle the moon and return to Earth. Two CU Boulder scientists talk about what lies in store for the space agency’s ambitious Artemis Program. END_OF_DOCUMENT_TOKEN_TO_BE_REPLACED
Return to the top of the page