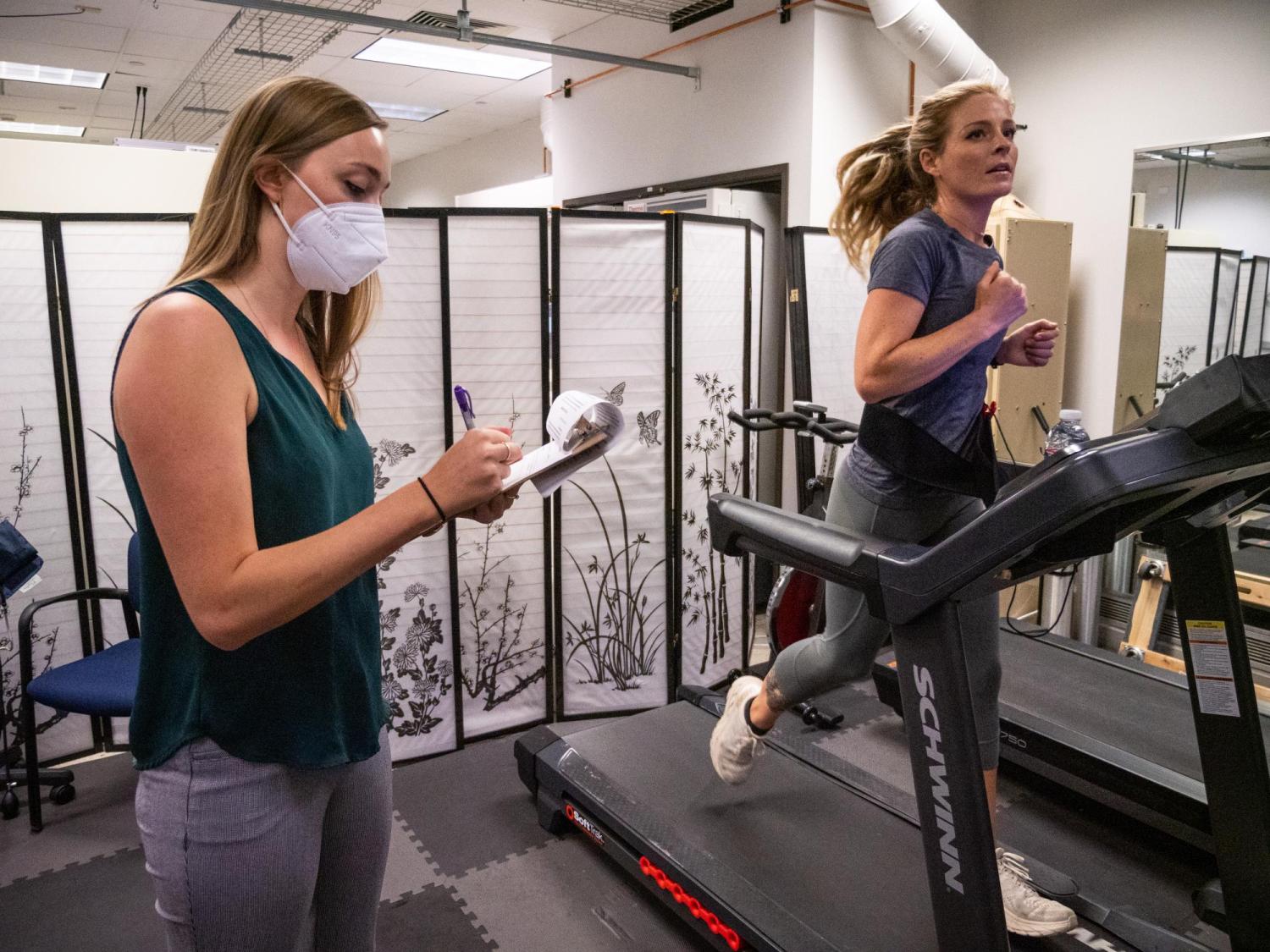 IMAGE CAPTION: Laurel Gibson, a PhD student in the Department of Psychology and Neuroscience, asks ultramarathon runner Heather Mashhoodi questions as part of a new study exploring how marijuana influences exercise. Study participants are exempted from the indoor mask requirement while on the treadmill.  Credit: Patrick Campbell/CU Boulder

As an ultramarathoner who covers as many as 100 miles a week during peak training, Heather Mashhoodi has to get creative to make the miles go by faster.

She listens to podcasts and audio books and takes in the natural beauty. And when her enthusiasm begins to wane mid-run, she pops half of a marijuana-infused gummy into her mouth.

“When I run for a really long time, this thing naturally kicks in and it makes the colors brighter and makes my thoughts clearer and makes me more emotionally in tune,” says Mashhoodi, 31. “When I use cannabis and run, I get to feel that at a little less intense mileage.”

Mashhoodi is among a growing number of athletes mixing weed with workouts, either to spark motivation, ease recovery or find more enjoyment in exercise.

With a lack of research, scientists are unsure just how Tetrahydrocannabinol (THC) and cannabidiol (CBD) — the two primary active ingredients in marijuana—influence physical activity. But in the wake of the Olympic suspension of sprinter Sha’Carri Richardson for testing positive for marijuana (a banned substance under World Anti-Doping Agency rules), the question has become a matter of much scientific debate: Does cannabis enhance or hinder performance? Or both? And if so, how?

“To date, there are no human studies on the effects of legal market cannabis on the experience of exercise,” said Laurel Gibson, a PhD student in the Department of Psychology and Neuroscience and principal investigator of the study. “That’s where we come in.”

The SPACE study (Study on Physical Activity and Cannabis Effects) will enlist more than 50 paid adult volunteers who already mix cannabis and exercise for a study involving three sessions. In the first, researchers measure heart rate, have subjects answer a questionnaire and take some baseline fitness measurements. Then, participants are assigned to go to a local dispensary and pick up either a specific CBD-dominant strain or THC-dominant strain.

On one follow up visit, they return, sober, to run on the treadmill for 30 minutes, answering questions every 10 minutes to assess things like their perception of the passage of time, how hard the workout feels, what they’re thinking about, and how much pain they’re in. On another visit, they do the same, only they get high before they come.

Federal law prohibits the possession or distribution of marijuana on college campuses, so subjects take it at home, before a researcher picks them up in a mobile laboratory — a white Dodge Sprinter van sometimes referred to as the ‘cannavan’— and brings them safely to the lab. Another precautionary measure: The runner wears a black safety belt around his or her waist on the treadmill. 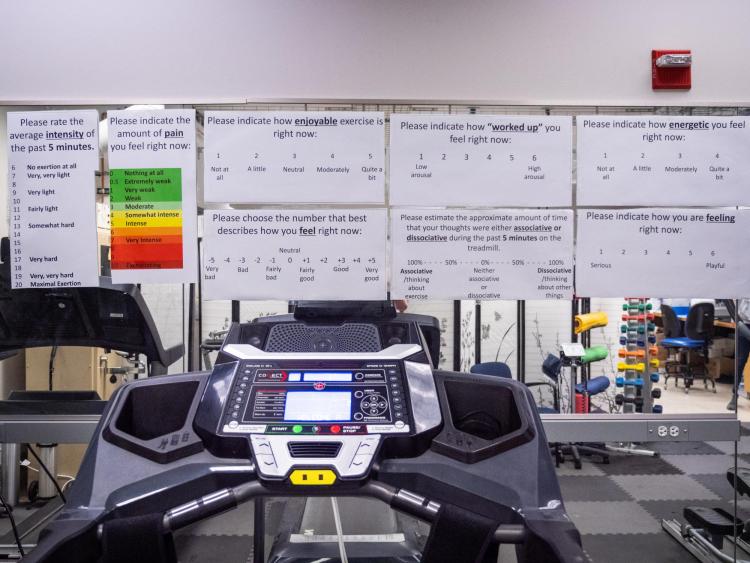 Questions on the wall ask study participants how they feel and what they're thinking about while running under the influence of cannabis.

By comparing sober sessions to sessions including cannabis, Gibson and her colleagues hope to make sense of a perplexing contradiction in cannabis research.

“Cannabis is often associated with a decrease in motivation— that stereotype of couch-lock and laziness,” said Gibson. “But at the same time, we are seeing an increasing number of anecdotal reports of people using it in combination with everything from golfing and yoga to snowboarding and running.”

One CU Boulder study found that 80% of cannabis users mix weed and working out, with 70% saying it increases enjoyment, 78% saying it boosts recovery and 52% saying it motivates them. Curiously, another study of older adults found that those who used marijuana got more exercise than those who didn’t.

“As we get older, exercise starts to hurt, and that is one reason older adults don’t exercise as much,” said Angela Bryan, a professor of psychology and neuroscience and Gibson’s faculty advisor on the SPACE study, noting that cannabinoids have anti-inflammatory and analgesic properties. “If cannabis could ease pain and inflammation, helping older adults to be more active, that could be a real benefit.”

Even more intriguing, some studies suggest that it is not endorphins that are responsible for the famous “runner’s high” but rather endogenous cannabinoids, naturally produced cannabinoid-like brain chemicals that kick in after a period of exercise, binding to receptors in the brain to make us euphoric and alert. By ingesting CBD or THC, which bind to those same receptors, athletes might, as Mashhoodi describes, enhance or get a head start on that good feeling.

“It is possible that exogenous cannabinoids like THC or CBD might activate the endocannabinoid system in a way that mimics the runner’s high,” said Gibson. 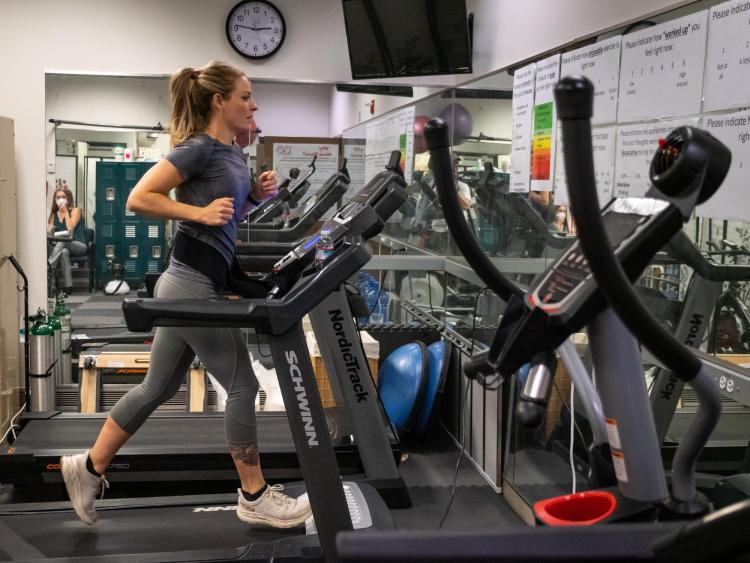 Ultrarunner Heather Mashhoodi on the treadmill

The researchers are quick to note that cannabis is also associated with negative effects, including paranoia, confusion and anxiety. They’ll be looking for those effects, too.

Ultimately, they hope their findings can help inform discussions everywhere from doctors’ offices to the governing bodies of sport, which will soon be re-evaluating whether marijuana should remain listed as a “banned substance” in part because of its potential to enhance performance.

Mashhoodi, one of the first to sign up for the study, said she’s skeptical that cannabis provides any performance benefit. She said she does not run faster or farther when she’s stoned. But she feels less joint pain and, psychologically, the benefits are clear.

She’s eager to see what the study reveals.

“To me it’s just exciting to participate,” Mashhoodi said. “We know so little and there is so much we need to learn.”

To learn more about the SPACE study, or volunteer, visit the study website.

Seventy-eight years ago on Jan. 27, the Auschwitz concentration camp closed after liberation by the Soviet army. Professor Janet Jacobs, who researches genocide, trauma and collective memory, discusses the ways in which the experiences and trauma of Holocaust survivors are passed down through generations. END_OF_DOCUMENT_TOKEN_TO_BE_REPLACED

A model of your very own kidney made entirely from soft and pliable polymers? Researchers at two CU campuses are on the cusp of 3D printing realistic replicas of human anatomy. END_OF_DOCUMENT_TOKEN_TO_BE_REPLACED

Legalizing recreational cannabis does not increase substance use disorders or use of other illicit drugs in adults and may reduce alcohol-related problems, according to new research. The study also found no link between cannabis legalization and increases in cognitive, psychological, social, relationship or financial problems. END_OF_DOCUMENT_TOKEN_TO_BE_REPLACED
Return to the top of the page