On Sunday, Oct. 31, thousands of representatives from around the world began to gather in Glasgow, Scotland, for the 26th United Nations Climate Change Conference of the Parties, also known as COP26.

The annual two-week conference brings together 197 countries that agreed to the U.N. Framework Convention on Climate Change (UNFCCC), a landmark environmental treaty adopted in 1992—which most recently produced the 2015 Paris Climate Agreement.

In addition to numerous CU Boulder scientists and students headed to Glasgow this week, CU Boulder is involved in several events during COP26 and has contributed to the science that informs the meeting.

The Governor’s Climate & Forests Task Force, a global program based at CU Boulder, will host an official side event, The Manaus Action Plan: A New Pathway for Forests, People, and Economies in a Post-COVID World. The GCF Task Force will discuss the Manaus Action Plan, a plan for subnational leadership to reduce tropical deforestation, create forest-based economies, and protect the rights of Indigenous Peoples and local communities in one-third of the world's tropical forest states and provinces.

Join Cooperative Institute for Research in Environmental Sciences (CIRES), a partnership between CU Boulder and NOAA, as they stream “Science Show & Share” live from COP26 on Nov. 9 with Gina Fiorile and Max Boykoff. They invite teachers, classrooms and members of the public to learn about COP26 and be inspired by the work that scientists and climate activists are doing all around the world.

Delayed one year due to COVID-19, occurring in a year of record heat, storms and wildfires, and after a recent alarming Intergovernmental Panel on Climate Change (IPCC) report, the event is receiving unprecedented attention.

Under the Paris Agreement, countries agreed to slow human-made climate change and limit global warming to no more than 3.6 degrees Fahrenheit (2 degrees Celsius) above pre-industrial levels, aiming for 2.7 F (1.5 C). At COP26, these parties must now review that agreement and decide how to cut current global emissions nearly in half by 2030—because the world is not on track to meet these extremely important goals.

Marilyn Averill, senior fellow with the Getches-Wilkinson Center for Natural Resources, Energy and the Environment at Colorado Law, has been attending the UNFCCC negotiations almost every year since 2003. Max Boykoff, professor and director of the environmental studies program, and fellow in the Cooperative Institute for Research in Environmental Sciences (CIRES), has attended five times. He is also an author on the upcoming IPCC Sixth Assessment Report.

CU Boulder Today spoke with Averill and Boykoff about what this year’s conference entails, what’s at stake and what they hope is achieved.

What’s going on in Glasgow?

What goes on at a meeting like COP26 and who is involved?

Boykoff: In broad terms, there are different negotiators and different delegations from different countries in attendance. Some of the delegations are quite large, while some of them are just one person. They're representing the interests of their countries and they're part of a range of negotiations taking place, involving everything from finance to meeting the 1.5-degree target from the Paris Agreement.

What’s on the agenda?

Boykoff: The goal is to turn the Paris Climate Agreement rules into action. Number one is to find solutions and visions to reach this limit of 1.5 degrees Celsius warming above pre-industrial levels. Number two, they’ll be discussing how to support developing nations vulnerable to climate impacts, mobilizing the $100 billion pledged annually through 2025 to help developing countries with climate mitigation and adaptation. Number three is a commitment to end the use of coal and to protect forests, moving away from oil and gas, toward renewable energy. While it can be cast here in the United States as a political sort of activity, it really isn't: It is where climate science feeds into the need for decarbonization, that's largely accepted around the world.

How does climate science inform this meeting?

What would you hope to see come out of the conference this year?

Averill: Because of all the extreme storms, the extreme heat, the wildfires—all of the things that can be attributed to climate change that have happened in the last year or two, climate change is finally getting the kind of attention it deserves. But it's getting general attention, and what we need to do now is take action. And that action is not going to occur at these meetings. Their agreements tend to be very general. Parties need to take those agreements back home and turn them into action. No matter how much the parties raise their ambition and say, “we're going to do more,” what matters is what happens back home.

Boykoff: So, in the United States it would be to pass the reconciliation bill and to pass the infrastructure bill. And I don't say that in left-right politics. I say that on climate terms, because if it passes, that then sends President Biden in for the sessions with credibility. Without it, that can weaken his credibility to be able to call for these more ambitious measures.

One of the cruel realities of all this is that those countries that contribute least to the problem are at the forefront of climate impacts. I think it would be a wonderful outcome to provide encouragement to developing nations or those of the global South—a firm commitment with money that flows. 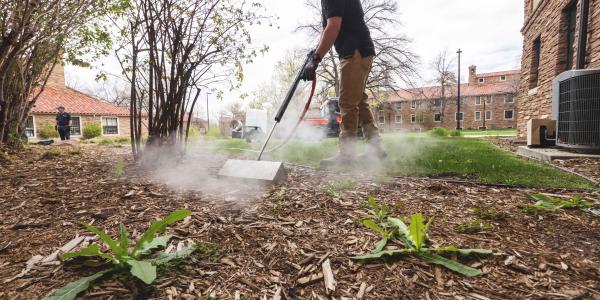 Both Housing & Dining Services and Facilities Management are incorporating into their weed-management practices machinery that uses saturated steam to control weeds in landscape beds and natural areas. END_OF_DOCUMENT_TOKEN_TO_BE_REPLACED 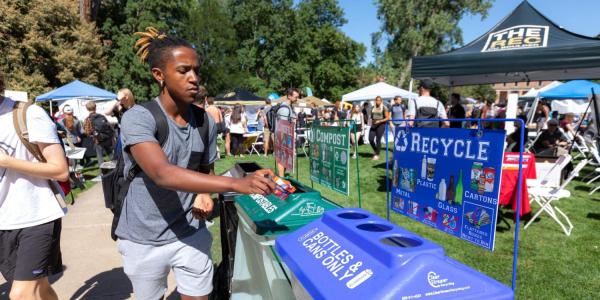 5 simple ways to be more sustainable

Many of us have goals to be more sustainable. But sometimes it can be challenging to know where to start. Here are five ways to help lower your carbon footprint and be more sustainable in your daily life. END_OF_DOCUMENT_TOKEN_TO_BE_REPLACED

A new CU Boulder study shows iodine from desert dust can decrease air pollution, but it could prolong greenhouse gas lifetimes. END_OF_DOCUMENT_TOKEN_TO_BE_REPLACED
Return to the top of the page