Ten times in the past month, Alan Fried and his colleagues climbed into the back of a tiny, hot twin-engine aircraft, crouching down on their knees to check on several precious boxes of humming scientific instruments.

For Fried and his team members in CU Boulder’s Institute of Arctic and Alpine Research (INSTAAR), it was just another day in their sky-bound laboratory. 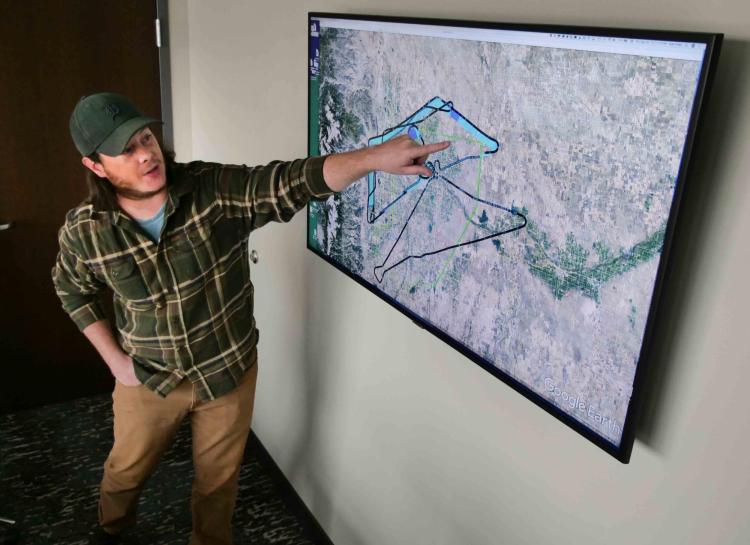 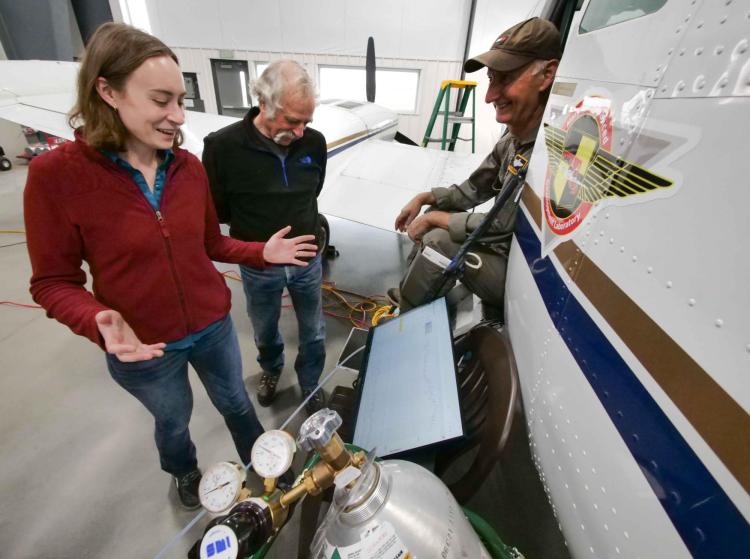 With 650 pounds of equipment in tow, pilot Nizar Bechara and one of the team’s researchers would next soar above Weld County to measure what is in the air. All told, this team spent about 29 hours in the sky in September and October gathering data about a wide variety of atmospheric emissions and chemicals.

“This has an application for air quality in the Front Range because we want to know: What's going on with our air and what are the pollutants and their concentrations that are emitted in the Colorado Front Range? Where are these pollutants coming from? Who do they affect?” said Fried, project lead and head of INSTAAR’s Advanced Laser Technology for Atmospheric Research (ALTAiR) Laboratory.

Collected by some of the most sensitive and accurate scientific instruments available, these data contain a wealth of information that will be calibrated and analyzed over the next few months to help scientists and policymakers cut unnecessary emissions, reduce greenhouse gases and help local residents breathe better.

From tragedy to knowledge

The idea for the research project was sparked in 2017 when an uncapped natural gas well underneath a residential neighborhood in Firestone, Colorado, caused an explosion that killed two people and severely injured another.

Based on the resulting $18.25 million settlement, the Colorado Department of Public Health and the Environment (CDPHE), with oversight from the Colorado Oil and Gas Conservation Commission, proposed experiments to examine what types of gases are being emitted by hydraulic fracturing (“fracking”) sites, primarily in Weld county.

What pollutants to look for

Researchers focused their quest on major leaks of chemicals like methane, the primary and extremely flammable component of natural gas.

The researchers also looked for plumes where methane and ethane, an odorless and colorless gas, appeared together. Because fracking sites often emit both chemicals, while landfills and animal operations do not, ethane is an important marker for oil and gas activity, said Daniel Bon, mobile lab lead investigator at CDPHE.

While ethane is not a greenhouse gas, it reacts quickly with other chemicals in the atmosphere, which in turn can affect greenhouse gas concentrations.

“Ethane is a strange beast,” said Fried. “In its aforementioned role, ethane acts as an indirect greenhouse gas.”

Ethane also influences ozone formation as it breaks down in the atmosphere. And ground-level ozone, which forms in a chemical reaction between volatile organic compounds (VOCs), nitrogen oxides (NOx) and sunlight, doesn’t just make Denver look hazy, it’s not good for our health. Studies suggest that chronic exposure to ground-level ozone can lead to lower birth weights, asthma and higher rates of premature death.

If Fried’s team measured especially high levels of methane or ethane emissions in an area, Bon followed up on the ground in a van from CDPHE equipped to collect additional data.

The researchers are also comparing these new data on emissions with what scientists collected in 2014 in the same region during the Front Range Air Pollution and Photochemistry Éxperiment (FRAPPÉ) led by the National Center for Atmospheric Research for CDPHE.

“Are they abating or are they increasing with time as fracking becomes more and more prevalent?” said Fried. 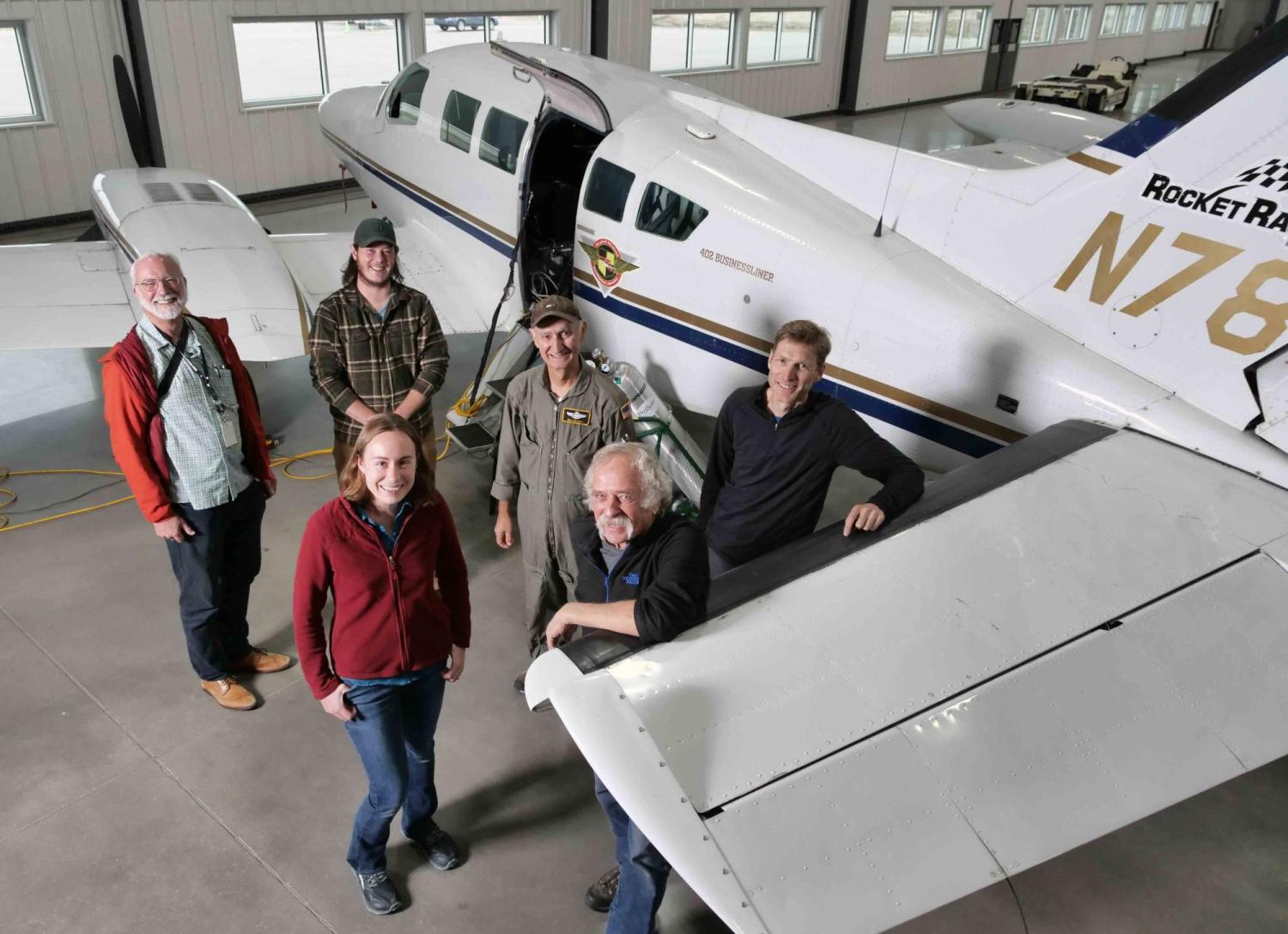 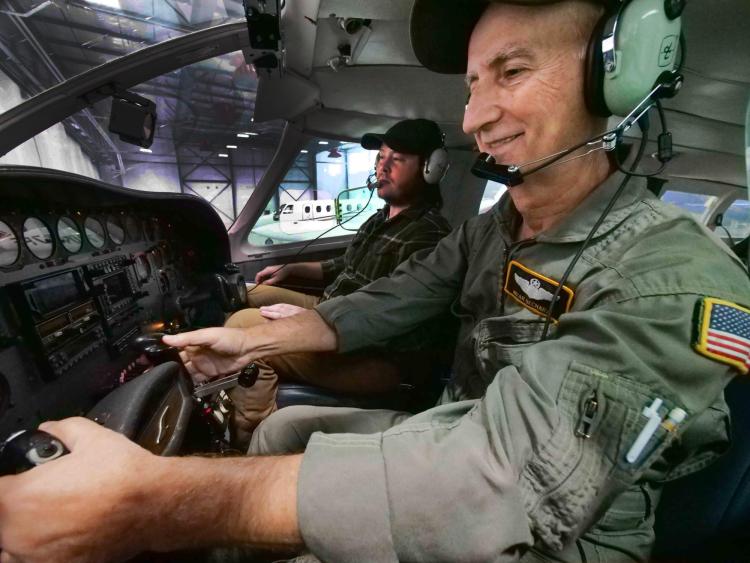 Pilot for the University Research Foundation at the University of Maryland Nizar Bechara (right) and graduate student Phillip Stratton. Photo by Casey A. Cass/CU Boulder. 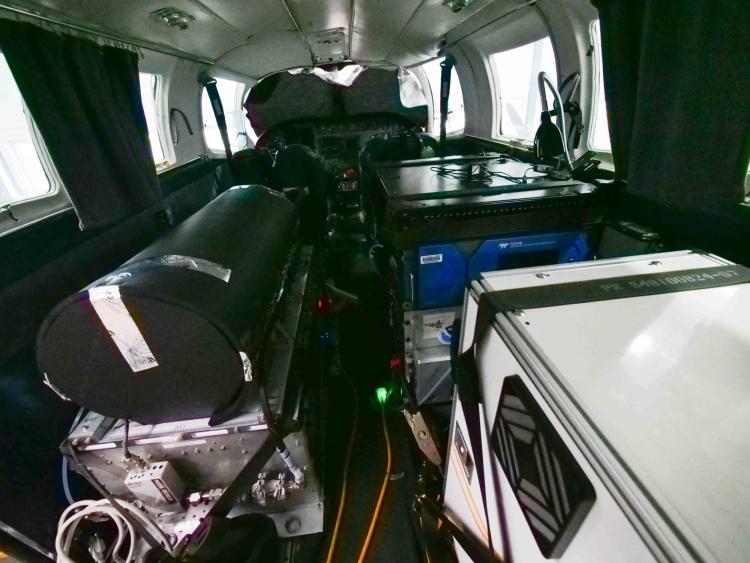 Equipment and sensors inside the aircraft. Photo by Casey A. Cass/CU Boulder.

Challenges of science in flight

Science in the sky is a little different than research done on the ground in a laboratory. First, the weather must cooperate.

Within hours of a planned flight, the team sometimes had to change their plans due to shifting winds and temperatures. When clear, Bechara took off from the Rocky Mountain Metropolitan Airport in Broomfield with Phillip Stratton or Hannah Daley, graduate students at the University of Maryland, on board to monitor and run the equipment. Each flight was a race against time: Three or four hours at most due to limited fuel.

Once off the ground, the first goal was to conduct a ‘mass balance,’ best described by imagining a large box in the sky around sources of potential emissions. The pilot flies the plane up to the top of this box, which the naked eye can sometimes see as the bottom of the lowest flat layer of clouds in the sky. Then the flight team conducted measurements––first upwind and then downwind––of likely emissions sources at different heights on the way down. Each instrument measured multiple things at the same time, filling in this box with a 3D data set.

To make it even more challenging, depending on the time of day and temperature, the edges of this box changed altitude. In addition, winds had to remain steady throughout the flight, so only about a third of these flights successfully completed a mass balance measurement.

Two pieces of equipment make the data from these flights especially valuable.

The CAMS spectrometer optical system, custom-built by Petter Weibring, Dirk Richter and James Walega of ALTAiR at INSTAAR, is so sensitive to ethane that it can measure a single drop of the substance within the volume of an Olympic-sized swimming pool (i.e., ethane concentrations as small as 30 to 40 parts-per-trillion).

The TOFWERK Vocus Elf, CI-TOF, is also extremely sensitive to detecting chemicals in the air and is one of the top products of its kind on the market today. Over the past month, it scanned the sky for a suite of toxic organic compounds like benzene, a highly flammable gas known to cause cancer.

At present, the researchers only have preliminary results, which they must adjust for quality control and analyze before findings will be available in early 2022. These data will help inform the state of Colorado about ozone formation in the Front Range, as well as inventories established by the Environmental Protection Agency, which are updated every several years, Fried said.

The oil and gas industry also benefits from this research by spotting possible leaks early enough to fix a costly and potentially dangerous problem. Unrelated to this research, checking for methane and ethane leaks once saved a company $400,000 over four months, said Weibring.

“If methane leaks, it's a super potent greenhouse gas. So it’s not only that we can help the climate, but this kind of work also helps companies,” said Weibring. “It's a win-win.”

Collaborators on this project include: Scott Landes and Daniel Welsh at the Colorado Department of Public Health and Environment; Daniel Zimmerle and Stuart Riddick at Colorado State University; Riley Duren and Daniel Cusworth at the University of Arizona; and Alan Brewer, Sunil Baidar and Maxell Hollaway of the National Oceanic and Atmospheric Administration and affiliates.

This work was funded by The Colorado Air Pollution Control Division, Department of Public Health & Environment.

Birds that can live at 14,000 feet and also breed at sea level might have evolved more quickly than previously thought. END_OF_DOCUMENT_TOKEN_TO_BE_REPLACED

Despite the Inflation Reduction Act, U.S. progress on climate change remains stuck in a climate conundrum, CU Boulder experts say, hampered by politics, complexity and the scope of the problem. END_OF_DOCUMENT_TOKEN_TO_BE_REPLACED
Return to the top of the page