Whether it’s from jetting across time zones, pulling all-nighters at school or working the overnight shift, chronically disrupting our circadian rhythm—or internal biological clocks—can take a measurable toll on everything from sleep, mood and metabolism to risk of certain diseases, mounting research shows.

But a new University of Colorado Boulder study funded by the U.S. Navy suggests simple dietary compounds known as prebiotics, which serve as food for beneficial gut bacteria, could play an important role in helping us bounce back faster.

“This work suggests that by promoting and stabilizing the good bacteria in the gut and the metabolites they release, we may be able to make our bodies more resilient to circadian disruption,” said senior author Monika Fleshner, a professor of integrative physiology.

The animal study, published in the journal Brain, Behavior and Immunity, is the latest to suggest that prebiotics—not to be confused with probiotics found in fermented foods like yogurt and sauerkraut—can influence not only the gut, but also the brain and behavior.

Naturally abundant in many fibrous foods—including leeks, artichokes and onions—and in breast milk, these indigestible carbohydrates pass through the small intestine and linger in the gut, serving as nourishment for the trillions of bacteria residing there.

The authors’ previous studies showed that rats raised on prebiotic-infused chow slept better and were more resilient to some of the physical effects of acute stress.

For the new study, part of a multi-university project funded by the Office of Naval Research, the researchers sought to learn if prebiotics could also promote resilience to body-clock disruptions from things like jet lag, irregular work schedules or lack of natural daytime light—a reality many military personnel live with.

“They are traveling all over the world and frequently changing time zones. For submariners, who can be underwater for months, circadian disruption can be a real challenge,” said lead author Robert Thompson, a postdoctoral researcher in the Fleshner lab. “The goal of this project is to find ways to mitigate those effects.”

How a healthy gut may prevent jet lag

The researchers raised rats either on regular food or chow enriched with two prebiotics: galactooligosaccharides and polydextrose.

They then manipulated the rats’ light-dark cycle weekly for eight weeks—the equivalent of traveling to a time zone 12 hours ahead every week for two months.

Rats that ate prebiotics more quickly realigned their sleep-wake cycles and core body temperature (which can also be thrown off when internal clocks are off) and resisted the alterations in gut flora that often come with stress.

“This is one of the first studies to connect consuming prebiotics to specific bacterial changes that not only affect sleep but also the body’s response to circadian rhythm disruption,” said Thompson.

The study also takes a critical step forward in answering the question: How can simply ingesting a starch impact how we sleep and feel?

The researchers found that those on the prebiotic diet hosted an abundance of several health-promoting microbes, including Ruminiclostridium 5 (shown in other studies to reduce fragmented sleep) and Parabacteroides distasonis.

They also had a substantially different “metabolome,” the collection of metabolic byproducts churned out by bacteria in the gut.

Put simply: The animals that ingested the prebiotics hosted more good bacteria, which in turn produced metabolites that protected them from something akin to jet lag.

Clinical trials are now underway at CU Boulder to determine if prebiotics could have similar effects on humans. 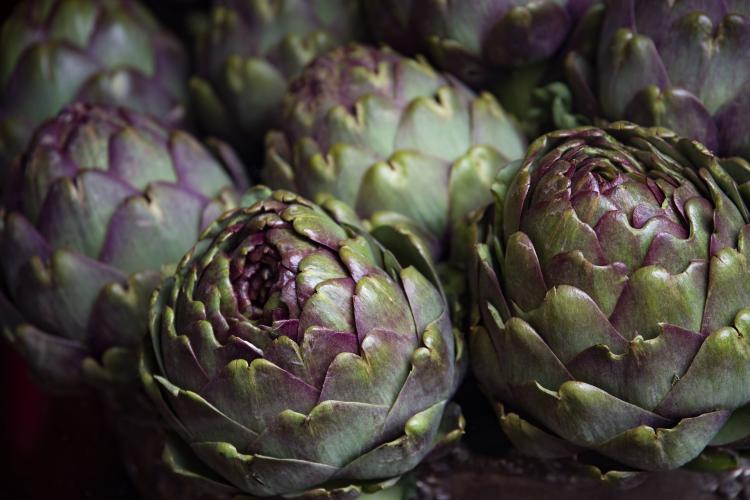 Artichokes are among the many foods rich in prebiotics.

The research could ultimately have broad public impact, leading to customized prebiotic mixtures designed for individuals whose careers or lifestyles expose them to frequent circadian disruption.

In the meantime, could simply loading up on legumes and other foods naturally rich in the compounds help keep your body clock running on time? It’s not impossible but unlikely, they say—noting that the rats were fed what, in human terms, would be excessive amounts of prebiotics.

Why not just ingest the beneficial bacteria directly, via probiotic-rich foods like yogurt?

That could also help, but prebiotics may have an advantage over probiotics in that they support the friendly bacteria one already has, rather than introducing a new species that may or may not take hold.

What about prebiotic dietary supplements?

“If you are happy and healthy and in balance, you do not need to go ingest a bunch of stuff with a prebiotic in it,” said Fleshner. “But if you know you are going to come into a challenge, you could take a look at some of the prebiotics that are available. Just realize that they are not customized yet, so it might work for you but it won’t work for your neighbor.”

New data shows that banning abortion would lead to more maternal deaths than previously thought, a critical finding less than a week after the Supreme Court ruled 5-4 to overturn Roe v. Wade. END_OF_DOCUMENT_TOKEN_TO_BE_REPLACED

On June 24, the Supreme Court released a decision in Dobbs v. Jackson Women’s Health Organization. The court also ruled to overturn the 1973 Roe v. Wade decision. Jennifer Hendricks, a professor at the University of Colorado Law School, addresses her interpretation of the rulings. END_OF_DOCUMENT_TOKEN_TO_BE_REPLACED

A recent survey shows more than 60% of Americans know “nothing at all” or only “a little bit” about what Juneteenth is or its importance in American history. Ashleigh Lawrence-Sanders, professor of African American and Black cultural history, discusses how and why we celebrate Juneteenth. END_OF_DOCUMENT_TOKEN_TO_BE_REPLACED
Return to the top of the page