An hour southwest of Denver on U.S. Highway 285, the North Fork of the South Platte River flows through Bailey, Colorado, surrounded by sprawling forest, rolling mountains and rocky outcrops.

While this scenic spot may be best known as the home of the Coney Island Hot Dog Stand, a great place for fly fishing, and a place to stop for gas on the way to Buena Vista, it’s also the site of important data-driven wildfire risk prevention work being conducted by CU Boulder researchers, Bailey area residents and the Platte Canyon Fire Protection District. 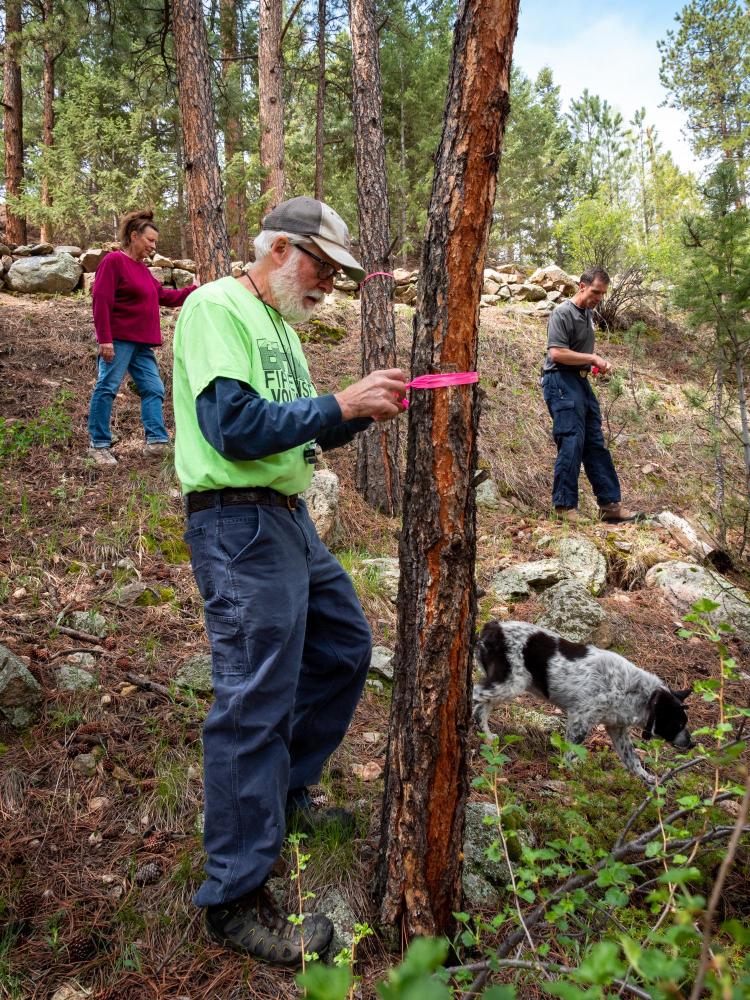 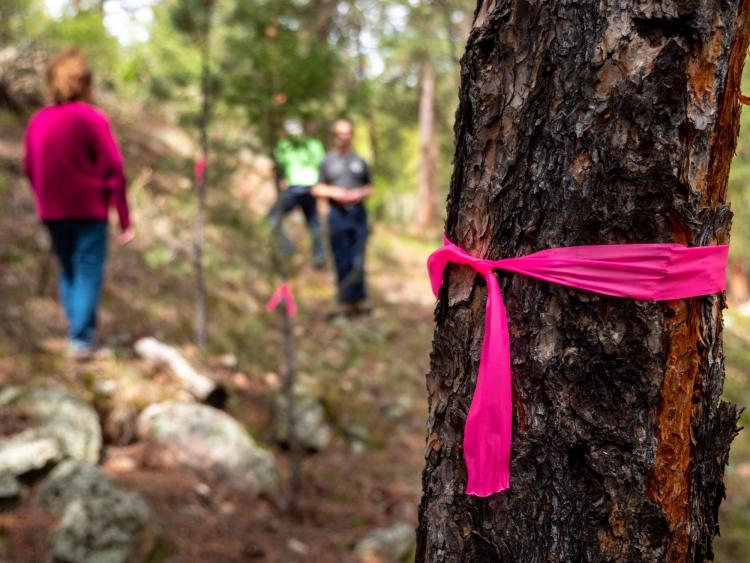 Hannah Brenkert-Smith, research associate professor at the Institute of Behavioral Science, has been studying the role of residents’ choices in reducing wildfire risk since the Hayman Fire in 2002—the state’s largest wildfire in recorded history for 18 years, until the Pine Gulch and Cameron Peak fires in 2020. She now brings those two decades of experience to a two-year partnership which surveyed Bailey area residents’ knowledge and choices around wildfire mitigation and prevention on their property in 2020.

“We know that it's people's decisions, their relationships, their trust in information that really drive the behaviors that shape the landscape,” she said. “We bring together our expertise to collect data relevant to local wildfire organizations, with the intent that it can help foster improvements to their programs so they can be more effective in reducing wildfire risk.”

Working with the Platte Canyon Fire Protection District, the Burland Ranchettes Home Owners Association and the wildfire research nonprofit WiRē, Brenkert-Smith and her team mailed out over 1,000 surveys to the homeowners in the subdivision. Data collected from these surveys, funded by the Office of Outreach and Engagement at CU Boulder, are revealing that residents are often overestimating their preparation and underestimating their risk.

This type of behavioral data gathering project is already being replicated across the state in other mountain communities vulnerable to wildfire.

“We try to shine a light on the fact that people’s decisions are informed by what they identify as being important or not, affecting how we prioritize the spending of our resources,” said Brenkert-Smith.

An opportunity to have a conversation

The reality of living in the Bailey area has not changed much in the past few decades: There’s still one Loaf & Jug in town, a post office and a sense of peace away from the big city. But wildfires are getting worse, due to more than 150 years of fire suppression and drier and hotter conditions from climate change.

“Wildfire is a huge problem. This area around Bailey can be at extreme risk,” said Brenkert-Smith.

Up off the main roads and across steep terrain, 8,000 people live in this remote community in Park County at almost 8,000 feet above sea level. While the overall population hasn’t increased, many newer residents have moved in over the past 10 years who may be less aware of the risks of living in the wilderness-urban interface (WUI).

The researchers mailed out 1150 paper surveys to residents of the Burland Ranchettes subdivision, asking questions about who lives there, their experience with wildfire, if they're doing anything to reduce their risk, if they have evacuation plans and where they get information about wildfire. Over 400 households voluntarily replied.

Then the survey responses were compared to on-the-ground wildfire risk assessments of people’s residential properties conducted by local firefighters.

If a resident responds that they don’t think their property has much wildfire risk, that response can be directly compared with a recent evaluation of their property to see if there is a mismatch.

A lot of people moved into the mountains, and they didn’t realize that where they moved is what they've been seeing on the news. This ecology that we live in was designed to burn.”
—Fire Chief Joe Burgett, Platte Canyon Fire Protection District

“We’ve had some real ‘aha’ moments,” said Brenkert-Smith. “Doing this comparison is not to prove that the residents are wrong. It’s an opportunity to have a conversation.”

These results are also shared with the fire protection district and other local wildfire officials through presentations, infographics and a project report that will allow them to utilize the information long after the researchers have finished gathering and analyzing the data.

In this majority owner-occupied community, only about half of respondents said they were “very aware” of wildfire risk when they moved to the area, although 90% had some awareness of wildfire risk. The data also revealed that in general, these residents tend to think they have lower risk than the professional evaluation calculations. For example, only 22% of the respondents rated their property as high risk compared to the professional ratings that assigned high risk to 61% of the households.

For Fire Chief Joe Burgett, the fact that residents are underestimating their risk is a sign of the communication gap between fire departments and residents. While he believes the public has a fairly good concept of wildfire risk, they may not take it seriously enough.

“It's not because we haven't told our community, but it's because they don't understand the same language we speak,” said Chief Burgett. “We need to educate the public to understand that language.”

On steps taken to be more fire wise

To close this gap, the survey results provide data from 13 categories about where those gaps are, which the fire protection district can then address.

More than 90% of respondents said they are doing some kind of mitigation on their property, like clearing leaf litter and pine needles from their roof and gutters, and more than 80% said they mowed or raked around their home for wildfire risk reduction. Yet less than half have taken action to improve the structure of their home, a much more time consuming and expensive proposition.

“There may be other things that are competing for their time and their money, their attention, and their concern,” said Brenkert-Smith.

A changing population and expectations

While responding residents may be underestimating their wildfire risk, they recognize that the local firefighters do not have sufficient resources to keep a wildfire from spreading and absolutely do not think that firefighters should put their lives at risk to protect their property, said Burgett.

He emphasizes personal accountability and accepted risk when living in the West: Whether property owners are doing it on their own, hiring someone to help them or supporting the local fire jurisdiction to do the work, it’s a collaborative effort to live with fire.

This accountability is more important than ever in the Bailey area, as many newer residents have moved to the area in the last 10 years and the COVID-19 pandemic has inspired even more to move out of large cities to less populated areas, away from people and the virus.

In addition, Bailey and similar mountain communities are a lot riskier than just a couple decades ago. The state of Colorado saw four of the five largest wildfires in its history in 2020, and wildfire is not going away.

“A lot of people moved into the mountains, and they didn’t realize that where they moved is what they've been seeing on the news,” said Burgett. “This ecology that we live in was designed to burn.”

While newer residents expect support from local fire departments, they often have limited resources and at the same time, carry a big responsibility. Residents being willing to work with and support them in fire safety and prevention efforts is key.

“Twenty-five years ago, people didn't want me to come to their property, to tell them what trees they needed to be cutting down for property mitigation and to be able to protect their home. They didn't want to have that discussion with me,” said Burgett. “And now our phone never stops. They know it's coming, it's just a matter of when.” 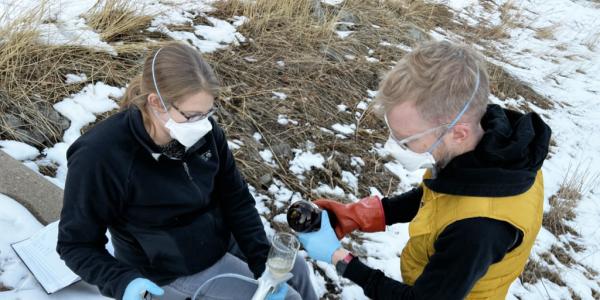 The Marshall Fire spurred researchers—many of them personally affected by the fire—to pivot and apply their expertise to the aftermath. One year later, dozens of ongoing research projects continue to explore the science behind what happened that day, the widespread impacts on people, pets and the environment and how we can mitigate future catastrophes amid a changing climate. END_OF_DOCUMENT_TOKEN_TO_BE_REPLACED 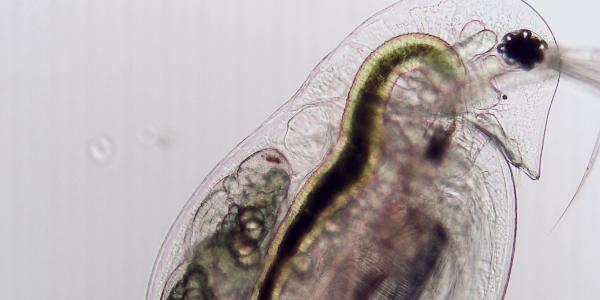 Whether it’s plankton exposed to parasites or people exposed to pathogens, a host’s initial immune response plays an integral role in determining whether infection occurs and to what degree it spreads within a population, new CU Boulder research suggests. END_OF_DOCUMENT_TOKEN_TO_BE_REPLACED

From diving Neanderthals to saliva-based COVID-19 tests, we remember the year in research at CU Boulder. END_OF_DOCUMENT_TOKEN_TO_BE_REPLACED
Return to the top of the page