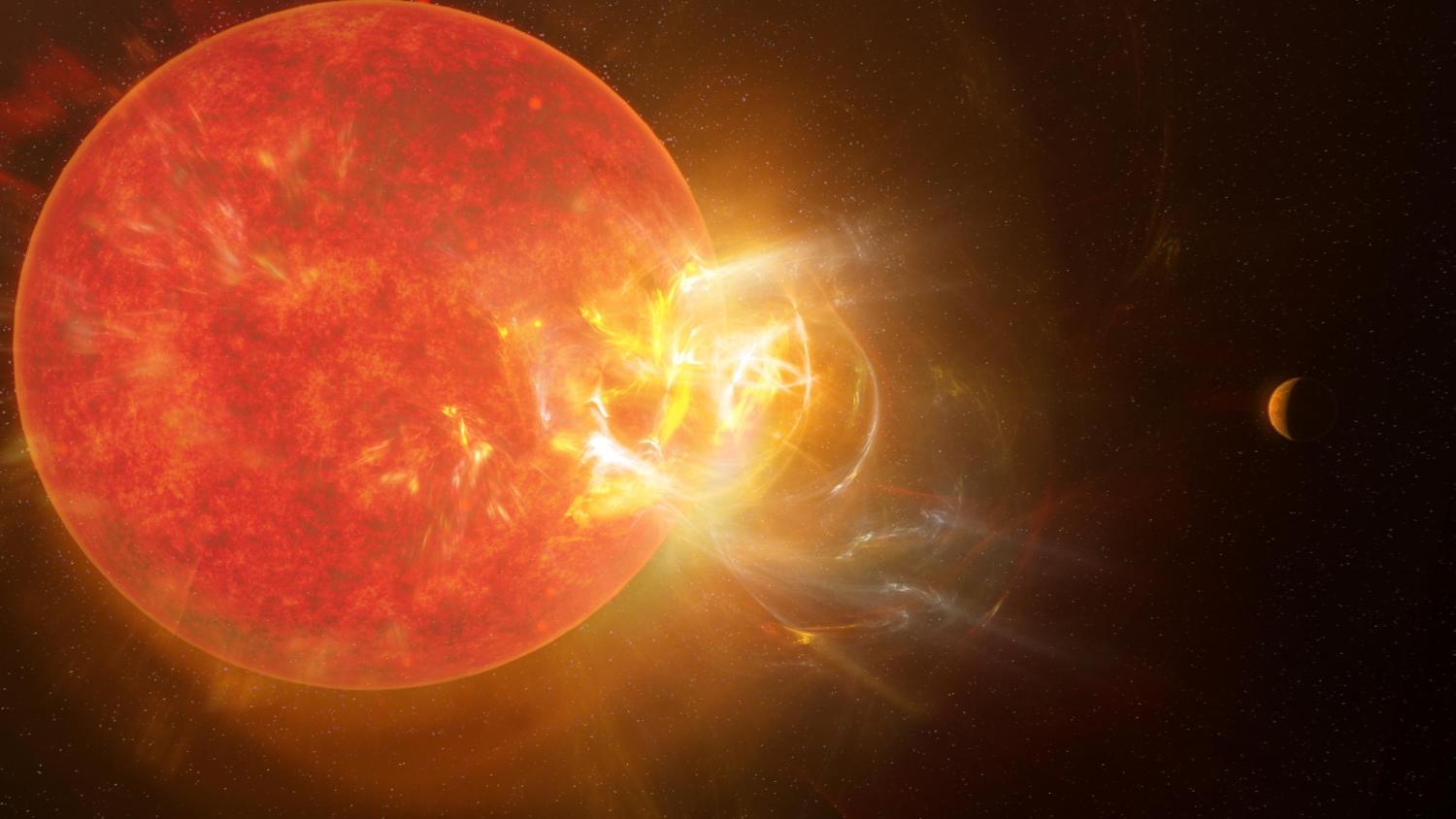 Scientists have spotted the largest flare ever recorded from the sun’s nearest neighbor, the star Proxima Centauri.

The research, which appears today in The Astrophysical Journal Letters, was led by CU Boulder and could help to shape the hunt for life beyond Earth’s solar system.

CU Boulder astrophysicist Meredith MacGregor explained that Proxima Centauri is a small but mighty star. It sits just four light-years or more than 20 trillion miles from our own sun and hosts at least two planets, one of which may look something like Earth. It’s also a “red dwarf,” the name for a class of stars that are unusually petite and dim.

Proxima Centauri has roughly one-eighth the mass of our own sun. But don’t let that fool you.

In their new study, MacGregor and her colleagues observed Proxima Centauri for 40 hours using nine telescopes on the ground and in space. In the process, they got a surprise: Proxima Centauri ejected a flare, or a burst of radiation that begins near the surface of a star, that ranks as one of the most violent seen anywhere in the galaxy.

“The star went from normal to 14,000 times brighter when seen in ultraviolet wavelengths over the span of a few seconds,” said MacGregor, an assistant professor at the Center for Astrophysics and Space Astronomy (CASA) and Department of Astrophysical and Planetary Sciences (APS) at CU Boulder.

The team’s findings hint at new physics that could change the way scientists think about stellar flares. They also don’t bode well for any squishy organism brave enough to live near the volatile star.

“If there was life on the planet nearest to Proxima Centauri, it would have to look very different than anything on Earth,” MacGregor said. “A human being on this planet would have a bad time.” 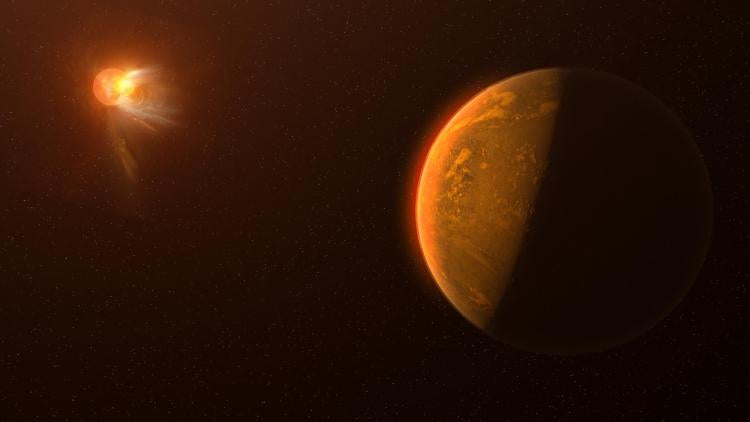 Artist's conception of a stellar flare as seen from the planet Proxima Centauri b, a potentially Earth-like world. (Credit: NRAO/S. Dagnello)

The star has long been a target for scientists hoping to find life beyond Earth’s solar system. Proxima Centauri is nearby, for a start. It also hosts one planet, designated Proxima Centauri b, that resides in what researchers call the “habitable zone”—a region around a star that has the right range of temperatures for harboring liquid water on the surface of a planet.

But there’s a twist, MacGregor said: Red dwarves, which rank as the most common stars in the galaxy, are also unusually lively.

“A lot of the exoplanets that we’ve found so far are around these types of stars,” she said. “But the catch is that they’re way more active than our sun. They flare much more frequently and intensely.”

To see just how much Proxima Centauri flares, she and her colleagues pulled off what approaches a coup in the field of astrophysics: They pointed nine different instruments at the star for 40 hours over the course of several months in 2019. Those eyes included the Hubble Space Telescope, the Atacama Large Millimeter Array (ALMA) and NASA’s Transiting Exoplanet Survey Satellite (TESS). Five of them recorded the massive flare from Proxima Centauri, capturing the event as it produced a wide spectrum of radiation.

“It’s the first time we’ve ever had this kind of multi-wavelength coverage of a stellar flare,” MacGregor. “Usually, you’re lucky if you can get two instruments.”

The technique delivered one of the most in-depth anatomies of a flare from any star in the galaxy.

The event in question was observed on May 1, 2019 and lasted just 7 seconds. While it didn’t produce a lot of visible light, it generated a huge surge in both ultraviolet and radio, or “millimeter,” radiation.

“In the past, we didn’t know that stars could flare in the millimeter range, so this is the first time we have gone looking for millimeter flares,” MacGregor said.

Those millimeter signals, MacGregor added, could help researchers gather more information about how stars generate flares. Currently, scientists suspect that these bursts of energy occur when magnetic fields near a star’s surface twist and snap with explosive consequences.

In all, the observed flare was roughly 100 times more powerful than any similar flare seen from Earth’s sun. Over time, such energy can strip away a planet’s atmosphere and even expose life forms to deadly radiation.

That type of flare may not be a rare occurrence on Proxima Centauri. In addition to the big boom in May 2019, the researchers recorded many other flares during the 40 hours they spent watching the star.

“Proxima Centauri’s planets are getting hit by something like this not once in a century, but at least once a day if not several times a day,” MacGregor said.

The findings suggest that there may be more surprises in store from the sun’s closest companion.

“There will probably be even more weird types of flares that demonstrate different types of physics that we haven’t thought about before,” MacGregor said.

Other coauthors on the new study include Steven Cranmer, associate professor in APS and the Laboratory for Atmospheric and Space Physics (LASP) at CU Boulder; Adam Kowalski, assistant professor in APS and LASP at CU Boulder, also of the National Solar Observatory; Allison Youngblood, research scientist at LASP; and Anna Estes, undergraduate research assistant in APS.

CU Boulder has been selected as a member of the United States Space Command Academic Engagement Enterprise, a new national program designed to expand collaboration and academic exchanges between universities and Space Command. END_OF_DOCUMENT_TOKEN_TO_BE_REPLACED

Since July 2022, a miniature satellite about the size of a shoebox has been orbiting Earth and monitoring how much solar energy reaches the atmosphere, one of the "most important" Earth science measurements. Now, scientists are finalizing their analysis of the first five months of the testing. END_OF_DOCUMENT_TOKEN_TO_BE_REPLACED

The historic spacecraft soon hit Earth's atmosphere flying at speeds of almost 25,000 mph. CU Boulder aerospace engineer Iain Boyd breaks down what will happen to the capsule, and how NASA will keep it safe on reentry. END_OF_DOCUMENT_TOKEN_TO_BE_REPLACED
Return to the top of the page