How years of international collaboration led to Hope circling Mars 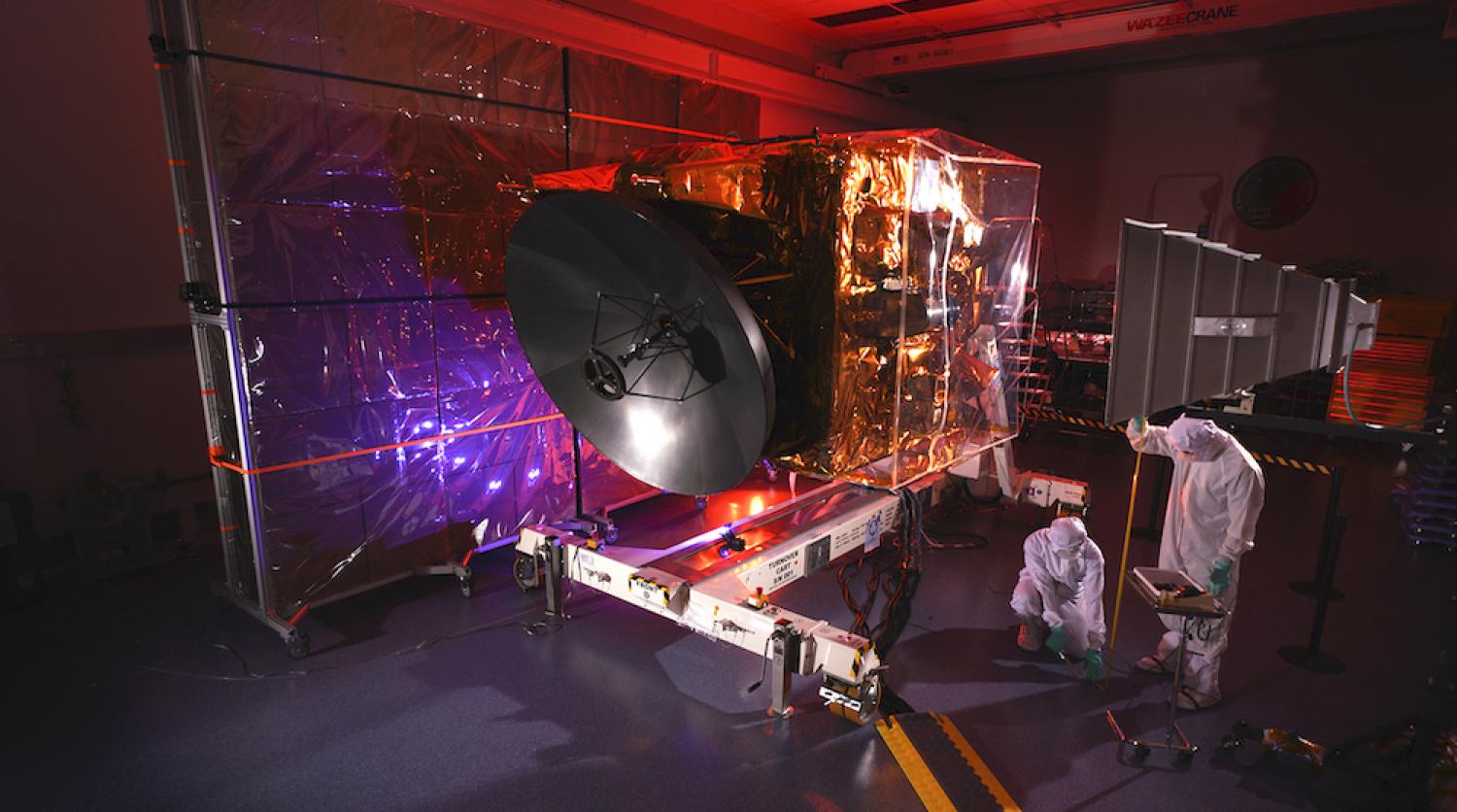 Engineers work on the Hope probe in a cleanroom. (Credit: MBRSC)

On Feb. 14, 2021, the Emirates Mars Mission (EMM), the first mission to Mars led by an Arab nation, released its inaugural image of the red planet in incredible detail. The photo, taken by the mission’s Hope (“Al Amal” in Arabic) probe, showed the red planet at dawn as sunlight moved across the surface—just revealing the edges of Olympus Mons, the tallest volcano in the solar system.

Noora Alsaeed is a scholar at the Mohammed Bin Rashid Space Centre (MBRSC) in the United Arab Emirates and PhD student at the Laboratory for Atmospheric and Space Physics (LASP) at CU Boulder. For Alsaeed, who doesn’t directly work on the mission, the photo is a promise of things to come. Once the probe launches its full science operations later this year, it will collect data on Martian weather at all points on the planet and at all times of day and seasons of the year. 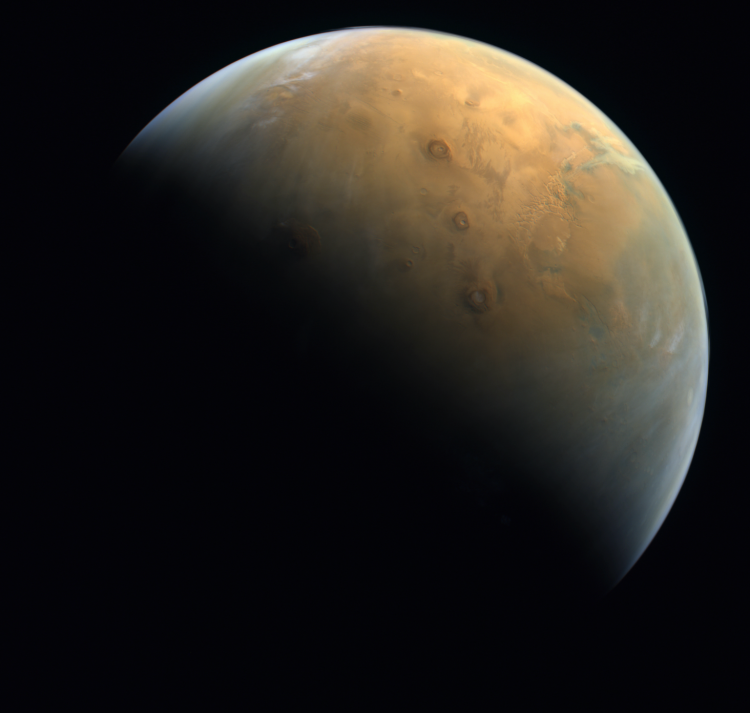 “It was the best Valentine’s Day gift ever,” said Alsaeed, who grew up in Dubai in the UAE. “The photo captured everything that EMM is going to study. You could see the dust lifting off the surface. You could see the clouds around the North and South poles.”

It was also a gift that was only possible because of international collaboration.

Beginning in 2015, Alsaeed joined dozens of other young researchers and engineers from the MBRSC who traveled to the foot of the Rocky Mountains in Boulder. Over five years, many of them developed, built, and tested the Hope probe and laid out its scientific goals working in collaboration with engineers and scientists at LASP. There was plenty of cultural exchange: Alsaeed has loved hiking in the mountains (but didn’t enjoy this year’s cold and snowy weather). She and her compatriots from the UAE, in turn, have taught their American friends about the central role that hospitality plays in Arabic-speaking countries.

In the process, these researchers learned the ins and outs of planetary science and aerospace engineering—from how carbon dioxide falls as snow over the Martian poles to how to design a propellant tank that can carry enough fuel to put a spacecraft into orbit around Mars.

The mission is being led by the MBRSC and includes a group of knowledge partners and experts from around the world—including at LASP, Arizona State University, the University of California, Berkeley and Japan’s Mitsubishi Heavy Industries.

“This sort of mission is like a primordial soup for innovation where you have all these diverse minds working together,” Alsaeed said.

As David Brain, a professor at LASP who leads the U.S. science team for EMM put it, “science doesn’t like international boundaries.”

Mohsen Mohammed Al Awadhi had a close eye on the product of that collaboration on Feb. 9. He was sitting at a computer screen in the Mission Operations Center at the MBRSC in Dubai when Hope began what engineers call a Mars orbit insertion maneuver.

The feat wasn’t easy—to swing itself into orbit around Mars, the spacecraft had to burn its thrusters for nearly 30 minutes, slowing its speed down from about 75,000 to 11,000 miles per hour. When the maneuver was successful and the control room burst into cheers, Al Awadhi remembers feeling “confused.”

“I wasn’t sure if we were done because it was so easy,” said Al Awadhi, who’s the mission systems engineer for EMM. “That showed the hard work of the team—that they made this critical event feel so easy.”

Al Awadhi had a long road to get to this point. When he graduated from college in 2010, he didn’t think he’d ever be able to use his skills to explore outer space. Instead, he worked on airplanes. But several years later, he jumped at the opportunity to get involved in EMM—in large part because he knew that the UAE was seeking to build a sustainable space program that would inspire Arab youth and engage in the worldwide space science community.

“We’re not just doing this to say we’re doing this,” Al Awadhi said. “We want to lead a mission that is unique and that is actually contributing to the scientific community.”

To make that happen, Al Awadhi and his wife, among others, moved to Boulder in 2015 and stayed until 2020. He worked side-by-side with engineers at LASP to learn about the unique challenges that come from sending equipment made on Earth millions of miles into space. All interplanetary space missions, for example, need to abide by “planetary protection” protocols—guidelines that prevent space probes and landers from contaminating bodies like Mars with living organisms from Earth. 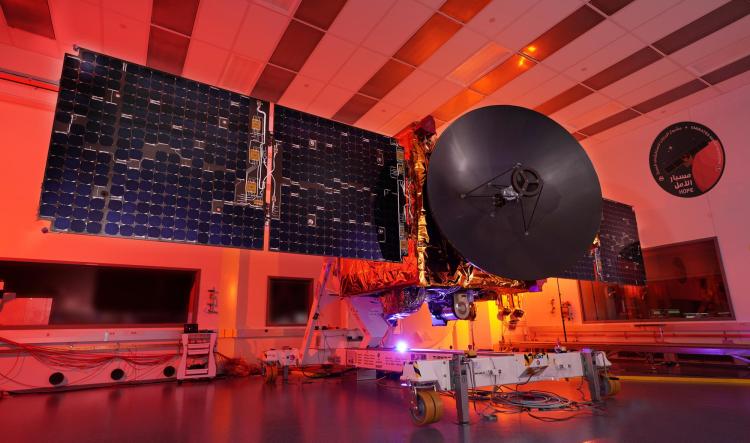 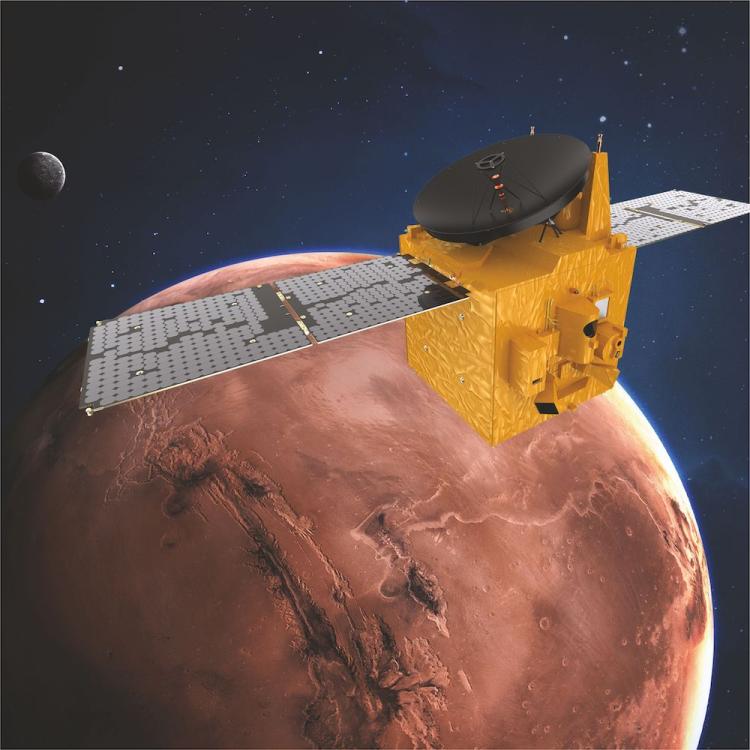 Along the way, Al Awadhi earned his master’s degree in aerospace engineering from CU Boulder and saw the birth of his first son.

“Boulder will always be my second home,” Al Awadhi said.

His colleagues at LASP feel the same way. Nicolas Ferrington is the systems engineering manager at the institute and worked closely with Al Awadhi on EMM. He said that he wanted to be a part of a mission that bridged national and cultural divides.

“Before EMM, I had never interacted on a close level with someone from the Middle East,” Ferrington said.

It wasn’t always easy. Ferrington noted that he had to adapt his own leadership style for his new colleagues. In the past, when he saw a problem that needed fixing, the engineer jumped in and took care of it on his own. The team from the UAE, however, didn’t have that same go-it-alone attitude, so Ferrington learned how to let other people step up.

He hopes that more space projects will follow the MBRSC and LASP’s lead in the coming years—especially as nations like the UAE look to start their own space programs.

“If you’re just purchasing a spacecraft from somebody, you’re not building the capacity in-house. You’re not allowing your own population to grow,” Ferrington said. “You need to find a model to transfer that knowledge.”

In the UAE, the mission has already become a symbol of national pride. To celebrate Hope’s arrival at Mars, Dubai’s Burj Khalifa, the world’s tallest skyscraper, was lit in red light—as were landmarks across the Middle East.

Brain said that people in the UAE today are as excited about space as Americans were during the Apollo era. During one of his trips to Dubai, the scientist spoke to a class of middle school girls about their nation’s mission to Mars.

“I couldn’t get out of the room they were so excited,” he said. “That engagement was astounding. I remember my own middle school experience of how uncool it was to show interest in things like that.”

Alsaeed added that the best part of the mission for her has been all of the messages she’s received from young people who want to know how they, too, can become a Mars explorer. When she was an undergraduate student at the American University of Sharjah in the UAE, her college didn’t offer a physics degree, let alone a major in planetary science.

Today, she said, young girls in the UAE won’t have to leave their home to reach the stars, and that might be the real legacy of EMM.

“They already have the passion,” Alsaeed said. “Now they feel like they can act on it.”

CU Boulder has been selected as a member of the United States Space Command Academic Engagement Enterprise, a new national program designed to expand collaboration and academic exchanges between universities and Space Command. END_OF_DOCUMENT_TOKEN_TO_BE_REPLACED

Since July 2022, a miniature satellite about the size of a shoebox has been orbiting Earth and monitoring how much solar energy reaches the atmosphere, one of the "most important" Earth science measurements. Now, scientists are finalizing their analysis of the first five months of the testing. END_OF_DOCUMENT_TOKEN_TO_BE_REPLACED

The historic spacecraft soon hit Earth's atmosphere flying at speeds of almost 25,000 mph. CU Boulder aerospace engineer Iain Boyd breaks down what will happen to the capsule, and how NASA will keep it safe on reentry. END_OF_DOCUMENT_TOKEN_TO_BE_REPLACED
Return to the top of the page