A giant, scorching-hot planet may be orbiting the star Vega

Vega is the fifth brightest star, excluding the sun, that can be seen from Earth. (Credit: CC image by Stephen Rahn via Wikimedia Commons)

Astronomers have discovered new hints of a giant, scorching-hot planet orbiting Vega, one of the brightest stars in the night sky.

The research, published this month in The Astronomical Journal, was led by University of Colorado Boulder student Spencer Hurt, an undergraduate in the Department of Astrophysical and Planetary Sciences.

It focuses on an iconic and relatively young star, Vega, which is part of the constellation Lyra and has a mass twice that of our own sun. This celestial body sits just 25 light-years, or about 150 trillion miles, from Earth—pretty close, astronomically speaking.

Scientists can also see Vega with telescopes even when it’s light out, which makes it a prime candidate for research, said study coauthor Samuel Quinn.

“It’s bright enough that you can observe it at twilight when other stars are getting washed out by sunlight,” said Quinn, an astronomer at the Harvard and Smithsonian Center for Astrophysics (CfA). 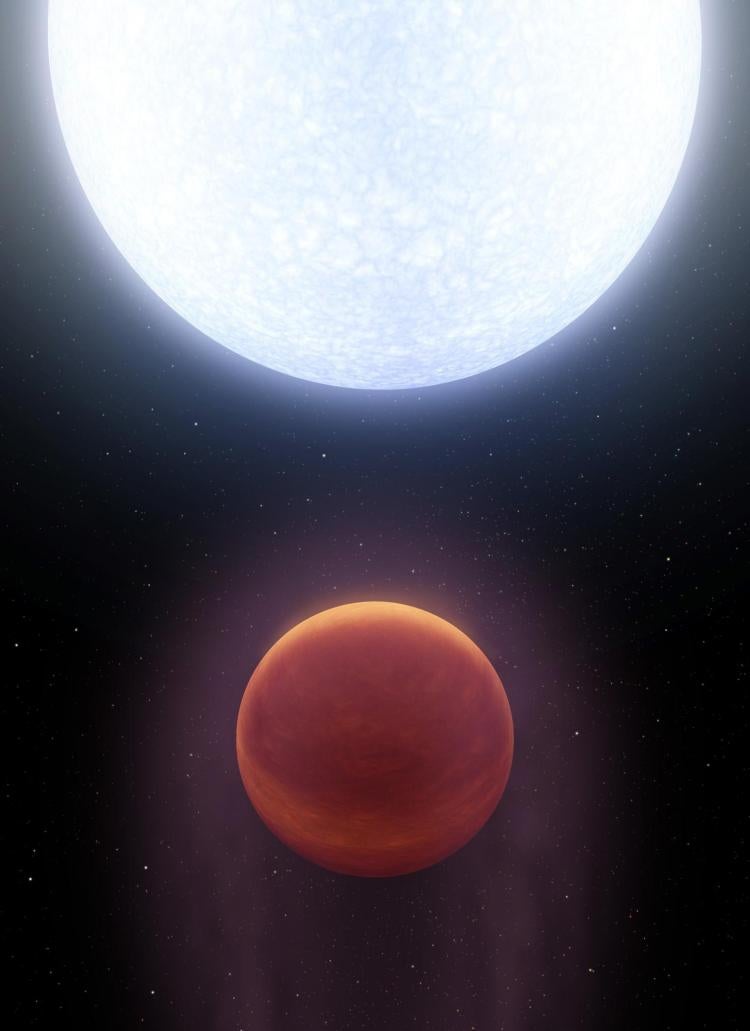 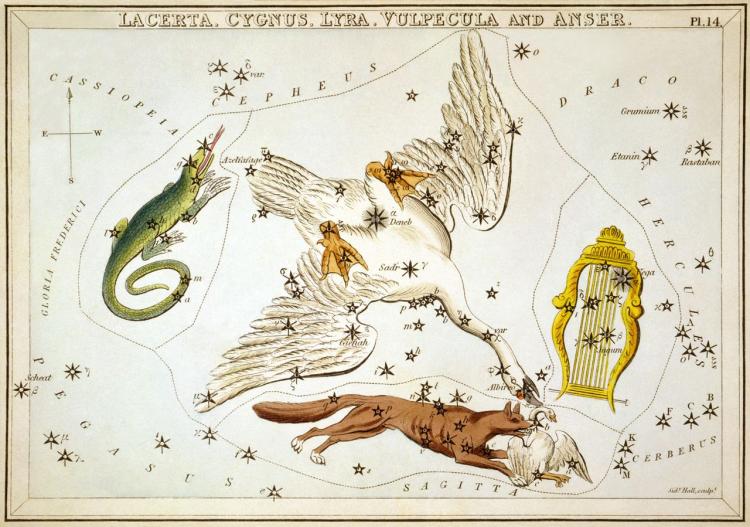 Top: Artist's depiction of a planet named KELT-9b, currently the hottest known exoplanet, which may resemble a candidate world in orbit around Vega; bottom: Historical illustration dating back to the early 1800s of the constellation Lyra, depicted right as a golden lyre. (Credits: NASA/JPL-Caltech; Public domain image via Wikimedia Commons)

Despite the star’s fame, researchers have yet to find a single planet in orbit around Vega. That might be about to change: Drawing on a decade of observations from the ground, Hurt, Quinn and their colleagues unearthed a curious signal that could be the star’s first-known world.

If the team’s findings bear out, the alien planet would orbit so close to Vega that its years would last less than two-and-a-half Earth days. (Mercury, in contrast, takes 88 days to circle the sun). This candidate planet could also rank as the second hottest world known to science—with surface temperatures averaging a searing 5,390 degrees Fahrenheit.

Hurt said the group’s research also helps to narrow down where other, exotic worlds might be hiding in Vega’s neighborhood.

“This is a massive system, much larger than our own solar system,” Hurt said. “There could be other planets throughout that system. It’s just a matter of whether we can detect them.”

Quinn would like to try. Scientists have discovered more than 4,000 exoplanets, or planets beyond Earth’s solar system, to date. Few of those, however, circle stars that are as bright or as close to Earth as Vega. That means that, if there are planets around the star, scientists could get a really detailed look at them.

“It would be really exciting to find a planet around Vega because it offers possibilities for future characterization in ways that planets around fainter stars wouldn’t,” Quinn said.

There’s just one catch: Vega is what scientists call an A-type star, the name for objects that tend to be bigger, younger and much faster-spinning than our own sun. Vega, for example, rotates around its axis once every 16 hours—much faster than the sun with a rotational period that clocks in at 27 Earth days. Such a lightning-fast pace, Quinn said, can make it difficult for scientists to collect precise data on the star’s motion and, by extension, any planets in orbit around it.

To take on that game of celestial hide-and-seek, he and colleagues pored through roughly 10 years of data on Vega collected by the Fred Lawrence Whipple Observatory in Arizona. In particular, the team was looking for a tell-tale signal of an alien planet—a slight jiggle in the star’s velocity.

“If you have a planet around a star, it can tug on the star, causing it to wobble back and forth,” Quinn said.

The search may have paid off, said Hurt, who began the study as a summer research fellow working for Quinn at the CfA. The team discovered a signal that indicates that Vega might host what astronomers call a “hot Neptune” or maybe a “hot Jupiter.”

“It would be at least the size of Neptune, potentially as big as Jupiter and would be closer to Vega than Mercury is to the sun,” Hurt said.

That close to Vega, he added, the candidate world might puff up like a balloon, and even iron would melt into gas in its atmosphere.

The researchers have a lot more work to do before they can definitively say that they’ve discovered this sizzling planet. Hurt noted that the easiest way to look for it might be to scan the stellar system directly to look for light emitted from the hot, bright planet.

For now, the student is excited to see his hard work reflected in the constellations: “Whenever I get to go outside and look at the night sky and see Vega, I say ‘hey, I know that star.”

Other coauthors on the new study include David Latham, Gilbert Esquerdo, Michael Calkins, Perry Berlind, Christian Latham and George Zhou at the CfA; Andrew Vandeburg at the University of Wisconsin-Madison; and Ruth Angus at the American Museum of Natural History.

CU Boulder has been selected as a member of the United States Space Command Academic Engagement Enterprise, a new national program designed to expand collaboration and academic exchanges between universities and Space Command. END_OF_DOCUMENT_TOKEN_TO_BE_REPLACED

Since July 2022, a miniature satellite about the size of a shoebox has been orbiting Earth and monitoring how much solar energy reaches the atmosphere, one of the "most important" Earth science measurements. Now, scientists are finalizing their analysis of the first five months of the testing. END_OF_DOCUMENT_TOKEN_TO_BE_REPLACED

The historic spacecraft soon hit Earth's atmosphere flying at speeds of almost 25,000 mph. CU Boulder aerospace engineer Iain Boyd breaks down what will happen to the capsule, and how NASA will keep it safe on reentry. END_OF_DOCUMENT_TOKEN_TO_BE_REPLACED
Return to the top of the page