When in August of 2019, CU Boulder Chancellor Phil DiStefano sought nominations for the 2020 Regent Awards, little did he or those involved know how different the honoring of the 2020 awardees would be.

Typically, the recipients are recognized at CU Boulder’s spring commencement, which in May 2020 ended up occurring virtually because of the COVID-19 pandemic. On Jan. 16, 2021, the 2020 awardees were given proper recognition at a private COVID-19-safe ceremony.

Given since 1882 and approved by the University of Colorado Board of Regents, the Regent Awards include: 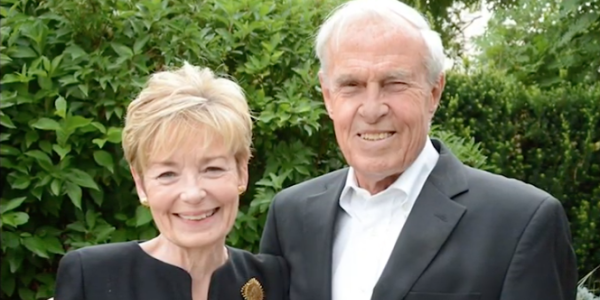 Described as “delightfully relentless,” Marcy Benson has been working for the betterment of the University of Colorado Boulder, the state and the nation for decades.

After earning a bachelor’s degree in sociology from the University of California, Santa Barbara, and a master’s in criminal justice from George Washington University, Benson worked in the administrations of Ronald Reagan and George H.W. Bush, notably as the director of the President’s Commission on White House Fellows. She was the White House liaison for presidential scheduling for the 1984 Reagan-Bush campaign, and worked in the offices of Political Affairs and Presidential Advance.

Benson has been an active volunteer and leader in support of the arts, health care, education and civic activities. With her husband, former CU President Bruce Benson, she co-chaired two fundraising campaigns totaling more than $2.5 billion: the Creating Futures campaign to benefit all four CU campuses, and the effort to build the new Children’s Hospital on the University of Colorado Anschutz Medical Campus. She chaired the Children’s Hospital board for three years and has been a board member for more than 20 years.

Benson has lent her time and persistent optimism to a number of civic and cultural organizations, including the University of Northern Colorado, CU Denver, the Denver Public Library Commission, and the Scientific and Cultural Facilities District. She is on the advisory panel of the CU Alzheimer’s Disease Research and Clinical Center.

As a member of the CU Foundation’s board of trustees, Benson helped to guide fundraising efforts for six years, advancing the university’s interests and reputation.

The Board of Regents is pleased to award the honorary degree Doctor of Humane Letters, honoris causa, to Marcy Benson for her tireless work on behalf of the University of Colorado, education and health care in the state and the nation. 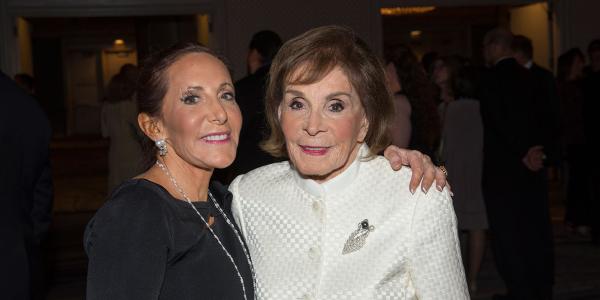 Through a life dedicated to education and research, Dr. Patricia Crown lives her commitment to children’s mental health every day. That commitment extends to their support system of friends, family and educators, creating a holistic approach to well-being that serves as a model for communities across Colorado.

A graduate of the education program at Colorado College, Crown went on to earn a master’s degree in guidance and counseling, and a PhD in counseling psychology, both from the University of Denver. After working for a number of years in her own psychotherapy practice, she committed herself fully to her personal and family philanthropy, serving for more than a decade on Crown Family Philanthropies’ Health and Human Services and Global Health committees. She has been a longtime supporter of Project PAVE, which provides violence prevention education, and has given generously to form partnerships with school districts in Boulder County and the Roaring Fork Valley that work toward a future where young people can flourish in a network of support unhindered by an inequitable health care system.

Perhaps Crown’s greatest impact, though, has come through the Renée Crown Wellness Institute, created in 2019 through a transformative endowment gift. The institute, named for Crown’s mother, is housed at CU Boulder and conducts research on children’s social and emotional wellness. It will help schools and families create an environment of wellness for youth in Colorado and, eventually, around the world. Faculty from the College of Arts and Sciences and the School of Education have already begun research projects and will work with community partners and school districts to make Crown’s vision a reality.

For her dedication to the health and well-being of children and families, the Board of Regents is pleased to award the University Medal to Patricia Crown. 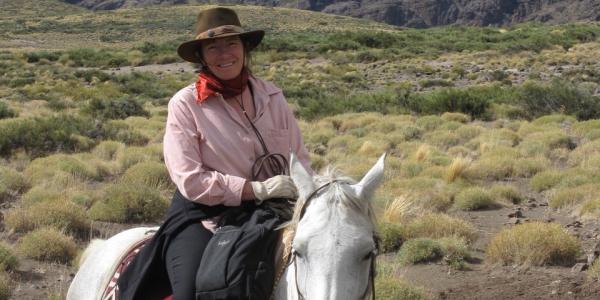 In 1980, de la Vista became the founding editor of the Windstar Journal at the Windstar Foundation in Snowmass, Colorado, whose mission is promoting environmental sustainability and land conservation. That experience inspired her to earn a journalism degree from CU Boulder in 1984. While at CU, she worked at the Environmental Center and organized the Fate of the Earth conference. During the 1990s, de la Vista became a certified educator at the Savory Center for Holistic Management, where she was a board member and chair.

Among her many accomplishments, de la Vista has helped preserve 15,000 acres near the Monte Vista National Wildlife Refuge; worked to restore wetlands in the San Luis Valley; helped to lead the Rio Grande Headwaters Land Trust; and created the Rio Grande Initiative, resulting in the protection of more than 26,000 acres along the Rio Grande and its tributaries in Colorado. Through a lifetime of education and problem-solving, de la Vista has become a trusted broker of agreements among ranchers, scientists, politicians and funders.

In 2018, de la Vista became the first director of the Salazar Rio Grande del Norte Center at Adams State University, where she uses her broad network of people and institutions, and her deep subject knowledge and grant-writing skills, to shape the future of water education in Colorado and the Mountain West.

For her dedication to the environment through intellectual rigor and a commitment to public service, the Board of Regents is pleased to present Rio de la Vista with the Distinguished Service Award. 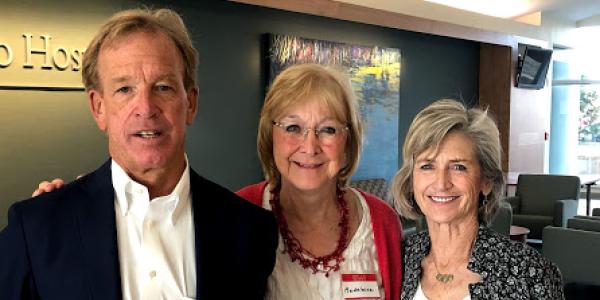 As a team of generous philanthropic leaders, Paul and Katy Rady have made investments in the University of Colorado Boulder that will pay dividends for decades to come.

Growing up in suburban Detroit, Paul heard friends talk of the beauty of the American West, leading him to open an atlas and choose a college sight unseen: Western State College (now Western Colorado University) in Gunnison. He hitchhiked there from Michigan and went on to earn a BA in geology in 1978, followed by a master’s degree from Western Washington University. Katy graduated the same year with a degree in graphic art and design from Grand Valley State College (now Grand Valley State University) in Allendale, Michigan.

Paul began a career in the petroleum industry at Amoco, then joined Bill Barrett Resources, becoming CEO, president and director within seven years. He left to start his own company, which he sold three years later to Marathon Petroleum. With the proceeds, Paul founded Antero Resources, which by 2017 had become the largest producer of natural gas liquids in the country.

Although neither Paul nor Katy attended the University of Colorado, they became major benefactors through personal experience with the Anschutz Medical Campus. After Katy lost her brother to cancer in 2015, she created the Paul R. O’Hara II Endowed Chair in Esophageal Cancer at the CU Cancer Center in his honor. She was the driving force in creating the Meg F. Rady and Family Chair in Congenital Cardiac Surgery. One of four daughters they adopted from China, Meg received excellent care for a heart defect at Children’s Hospital Colorado and continues to thrive today.

Their support only grew as the Radys created the endowed chair in geology at CU Boulder; established the Paul M. Rady School of Computer Science and Engineering at Western Colorado University; helped disadvantaged students through ACE scholarships; and donated generously to CU Engineering. Their leadership and philanthropy helped establish a new engineering collaboration with Western Colorado University, Paul’s alma mater, creating a true and vibrant partnership between Western and CU.

For their bold vision and transformative philanthropy, the Board of Regents is pleased to present the honorary degree Doctor of Humane Letters, honoris causa, to Paul and Katy Rady. 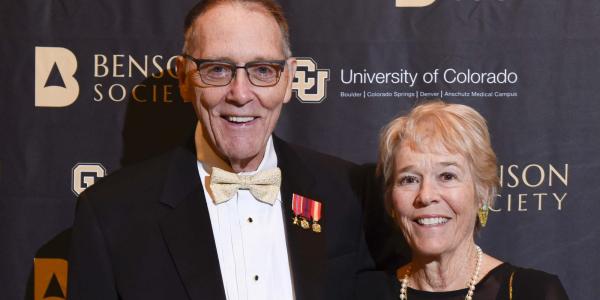 It would be difficult to find a couple more committed to CU Boulder and its mission as a place for research and innovation than Jeannie and Jack Thompson. They have shared their time, talents and financial resources selflessly and enthusiastically for decades.

Theirs is a CU story through and through, beginning when they were undergraduates in the early 1960s. Jeannie earned a degree in zoology, and Jack earned a history degree on an ROTC scholarship, served as a Marine Corps officer in Vietnam and returned to CU for a master’s in American history, followed by a doctorate from the University of Michigan. Jeannie earned a master’s and an MBA from Northwestern University.

After successful careers—she in health care, counseling, MBA admissions, executive development and mediation; he as a professor and dean—they turned their tireless attention to all four campuses of the University of Colorado, particularly CU Boulder.

Among the many recipients of the Thompsons’ time and talents, often in advisory or leadership positions: the Center of the American West, the BioFrontiers Institute, the College of Arts and Sciences, the Graduate School, the CU Foundation, the Alumni Association and CU Advocates. Their contributions funded the Jean L. and Jack C. Thompson Vaccine Development Research Neighborhood in the Jennie Smoly Caruthers Biotechnology Building.

Perhaps their most personal involvement has been with the College of Music, where they endowed the Thompson Jazz Program, enabling jazz studies to flourish, increase its international visibility and attract the most talented faculty and students. As a member of the steering committee, Jeannie helped a recent fundraising campaign reach its $50 million goal.

For their enduring commitment to the success and strength of the University of Colorado, the Board of Regents is pleased to award the University Medal to Jeannie and Jack Thompson.

Kaufman, a JILA fellow, will take home this prestigious award for his work advancing the control of atoms and molecules to improve atomic clocks and quantum information processing. END_OF_DOCUMENT_TOKEN_TO_BE_REPLACED 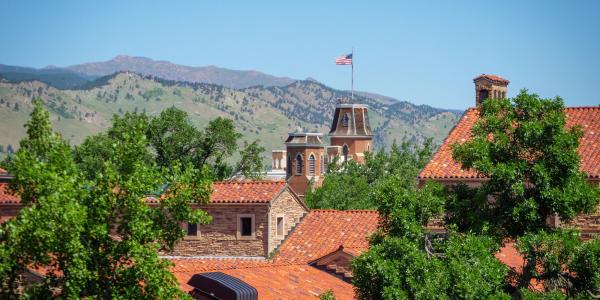 The Colorado chapter of the Public Relations Society of America honored College of Media, Communication and Information affiliates with Gold Pick Awards, and the Strategic Relations and Communications media team with three Silver Pick Awards for science-based stories and media pitches on health and tech topics. END_OF_DOCUMENT_TOKEN_TO_BE_REPLACED 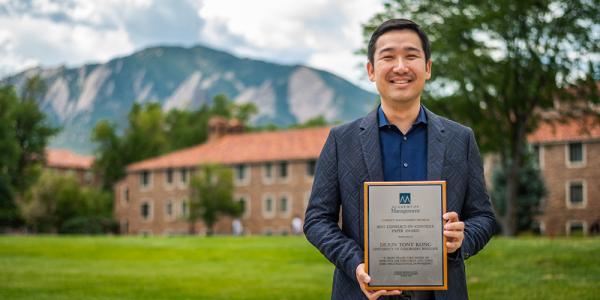 One of the Leeds School's newest professors was recognized this summer with a Best Paper Award from the Academy of Management for his work on trust trajectories. END_OF_DOCUMENT_TOKEN_TO_BE_REPLACED
Return to the top of the page