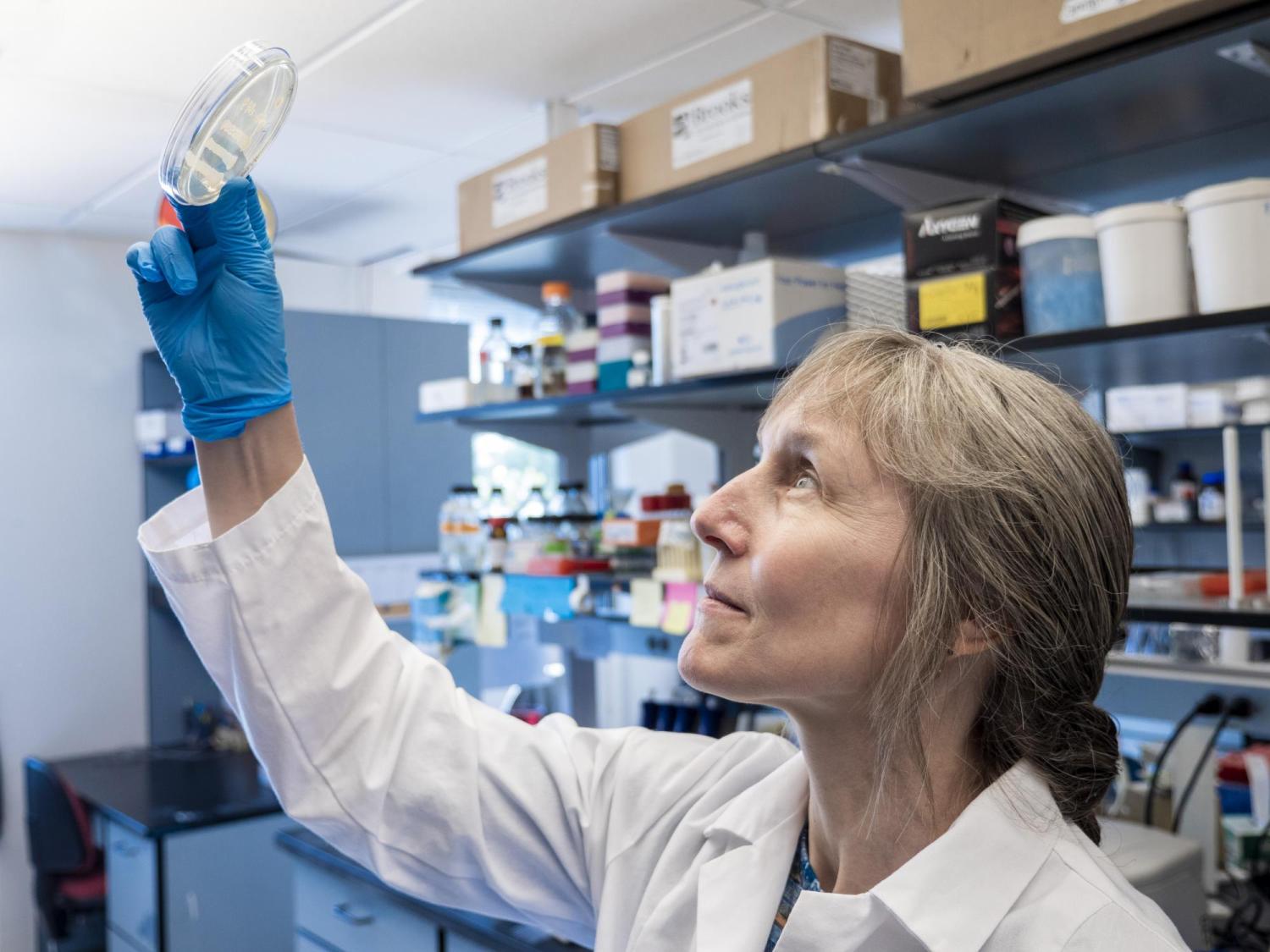 Corrie Detweiler, a professor of molecular, cellular and developmental biology, eyes some samples in the lab. (Photo: CU Boulder)

As scientists around the globe wage war against a novel, deadly virus, one CU Boulder lab is working on new weapons to battle a different microbial threat: a rising tide of antibiotic-resistant bacteria which, if left unchecked, could kill an estimated 10 million people annually by 2050.

“The COVID-19 situation is definitely putting us at risk for increasing resistance to antibiotics, so it’s more important now than ever that we come up with alternative treatments,” said Corrie Detweiler, a professor of molecular, cellular and developmental biology who has spent her career seeking those alternatives.

In a paper published Dec. 18 in the journal PLOS Pathogens, Detweiler and her research team unveil their latest discovery—a chemical compound that works with a host’s innate immune response to push past cellular barriers that help bacteria resist antibiotics.

Along with their other recently published discoveries, the authors say, the finding could lead to a new arsenal for fighting what could be the next big public health threat.

“If we don’t solve the problem of finding new antibiotics or somehow making old antibiotics work again, we are going to see sharply increasing deaths from bacterial infections we thought we had beaten decades ago,” said Detweiler. “This study offers a totally new approach and could point the way toward new drugs that work better and have fewer side effects.”

In the United States alone, 35,000 people die annually from bacterial infections that could not be treated because they’ve grown resistant to existing drugs. Countless others suffer life-threatening bouts with once-easily treatable illnesses like strep throat, urinary tract infections and pneumonia. By 2050, the authors note, there could be more deaths from antibiotic resistance than from cancer.

“As our existing antibiotics adapt and work less, we risk essentially going back to a period 100 years ago, when even a minor infection could mean death,” said Detweiler.

The pandemic has shone even more light on the problem, she notes, as many patients die not from the virus itself but from hard-to-treat secondary bacterial infections.

Meanwhile, she and other scholars worry that heightened use of antibiotics to prevent or treat those secondary infections, while at times necessary, may be exacerbating resistance.

“Fragile healthcare systems in many parts of the world may not withstand the COVID-19 pandemic if also faced with a substantial increase in antimicrobial resistance,” wrote the authors of an editorial in the British Medical Journal in November.

A new arsenal for an evolving war

Most antibiotics in use today were developed in the 1950s, and pharmaceutical companies have since scaled back on research in the field in favor of more profitable ventures.

To feed the pipeline, Detweiler’s lab developed a technique called SAFIRE for screening for new small molecules, which work differently than older drugs.

Of 14,400 candidates screened from a library of existing chemicals, SAFIRE identified 70 that hold promise.

The new paper centers around “JD1,” which appears to be particularly effective at infiltrating what are known as “Gram-negative bacteria.”

With a tough exterior membrane that prevents antibiotics from accessing the cell, and another interior membrane providing a buffer, these bacteria (including Salmonella and E. coli) are inherently difficult to treat.

But unlike other drugs, JD1 takes advantage of the host’s initial immune assault on that outer bacterial membrane, then slips inside and goes after the inner membrane too. 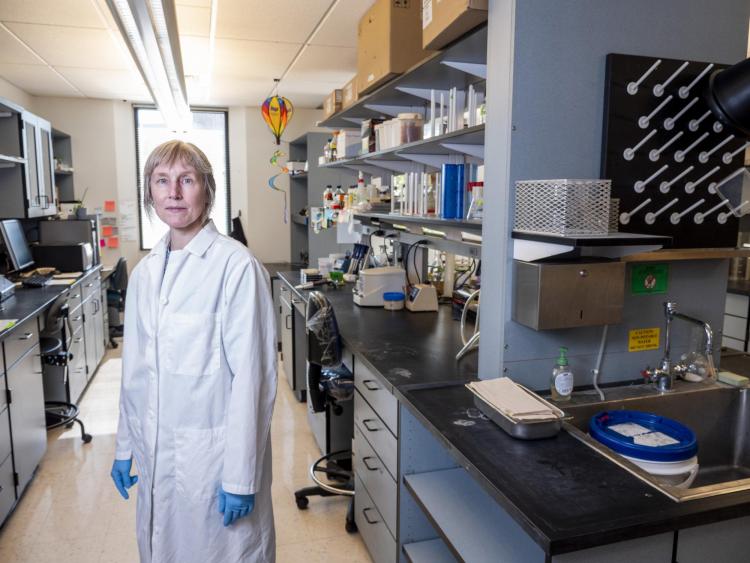 Professor Corrie Detweiler in her lab at CU Boulder

“This is the first study to show that you can target a Gram-negative bacteria’s inner membrane by exploiting the innate immune response of the host,” Detweiler said.

In laboratory and rodent experiments, JD1 reduced the survival and spread of Gram-negative bacteria called Salmonella enterica by 95%.

But while it damaged the bacterial cell membranes, it couldn’t penetrate the fine layer of cholesterol that lined its mammalian host’s cell membranes.

“Bacteria are vulnerable to JD1 in a way that our cells are not,” said Detweiler, noting that for this reason, side-effects would likely be minimal.

Further studies are underway to explore JD1 and other compounds like it.

Meanwhile, Detweiler has formed a spin-off company to help commercialize other compounds that work by inhibiting pumps, called “efflux pumps,” that bacteria use to pump out antibiotics.

“The reality is, evolution is way smarter than all of the scientists put together and these bacteria will continue to evolve to resist what we throw at them,” she said. “We cannot rest on our laurels. We have to keep feeding the pipeline.”

Seventy-eight years ago on Jan. 27, the Auschwitz concentration camp closed after liberation by the Soviet army. Professor Janet Jacobs, who researches genocide, trauma and collective memory, discusses the ways in which the experiences and trauma of Holocaust survivors are passed down through generations. END_OF_DOCUMENT_TOKEN_TO_BE_REPLACED

A model of your very own kidney made entirely from soft and pliable polymers? Researchers at two CU campuses are on the cusp of 3D printing realistic replicas of human anatomy. END_OF_DOCUMENT_TOKEN_TO_BE_REPLACED

Legalizing recreational cannabis does not increase substance use disorders or use of other illicit drugs in adults and may reduce alcohol-related problems, according to new research. The study also found no link between cannabis legalization and increases in cognitive, psychological, social, relationship or financial problems. END_OF_DOCUMENT_TOKEN_TO_BE_REPLACED
Return to the top of the page