Whether it's 2020 or Baby Shark: Study offers clues on how to stop thinking about it

Whether it's 2020 or Baby Shark: Study offers clues on how to stop thinking about it

“Let it go.” “Think about something else.” “Clear your head.”

In our attempts to de-clutter our busy minds and make room for new, often more productive thoughts, people tap an array of different approaches. Which works best, and how does each strategy distinctly impact the brain?

Researchers at the University of Colorado Boulder and the University of Texas at Austin have taken a first stab at answering this question, combining novel brain imaging with machine learning techniques to offer an unprecedented window into what happens in the brain when we try to stop thinking about something.

The findings, published this month in the journal Nature Communications lend new insight into the basic building blocks of cognition and could inform new therapies for issues like post-traumatic stress disorder and obsessive compulsive disorder. They also provide clues on how to form better study habits or innovate at work.

“We found that if you really want a new idea to come into your mind, you need to deliberately force yourself to stop thinking about the old one,” said co-author Marie Banich, a professor of psychology and neuroscience at CU Boulder.

For the study, Banich teamed up with Jarrod Lewis-Peacock, a cognitive neuroscience at UT Austin, to examine brain activity in 60 volunteers as they tried to flush a thought from their working memory.

As Lewis-Peacock describes it, working memory is the “scratch pad” of the mind where we store thoughts temporarily to help us carry out tasks. But we can only keep three or four thoughts in working memory at a time. Like a sink full of dirty dishes, it must be cleaned out to make new ideas possible.

“Once we’re done using that information to answer an email or address some problem, we need to let it go so it doesn’t clog up our mental resources to do the next thing,” he said.

When we ruminate over something – perhaps the fight we had with a friend or an offending text — that can color new thoughts in a negative light. Such rumination is at the root of many mental health disorders, said Banich.

“In obsessive compulsive disorder it could be the thought of as, ‘If I don’t wash my hands again I will get sick.’ In anxiety, it might be, ‘This plane is going to crash.’” 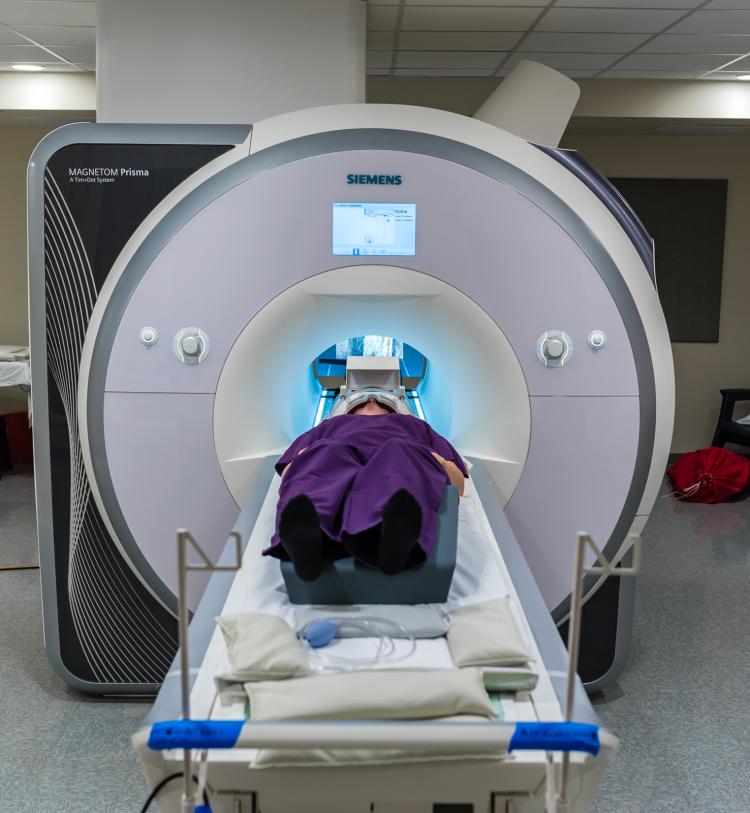 A study subject has her brain scanned in an fMRI machine at CU Boulder.

To determine if people can truly purge a thought, and how, the team asked each volunteer to lay down inside a functional magnetic resonance imaging machine (fMRI) at the Intermountain Neuroimaging Center on the Boulder campus.

They were shown pictures of faces, fruits and scenes and asked to maintain the thought of them for 4 seconds. Meanwhile, researchers created individualized ‘brain signatures’ showing precisely what each person’s brain looked like when they thought of each picture.

Afterward, participants were told to: replace the thought (“replace apple with mountain”); clear all thoughts (akin to mindfulness meditation); or suppress the thought (focus on it and then deliberately try to stop thinking about it). In each case, the brain signature associated with the image visibly faded.

“We were thrilled,” said Banich. “This is the first study to move beyond just asking someone, ‘Did you stop thinking about that?’ Rather, you can actually look at a person’s brain activity, see the pattern of the thought and then watch it fade as they remove it.”

The researchers also found that “replace,” “clear” and “suppress” had very different impacts.

While ‘replace’ and ‘clear’ prompted the brain signature of the image to fade faster, it didn’t fade completely, leaving a shadow in the background as new thoughts were introduced.

‘Suppress,’ on the other hand, took longer to prompt forgetting but was more complete in making room for a new thought.

A mirror into the mind

More research is necessary, but the findings suggest that students may want to pack up their algebra notes, take a break and deliberately try not to think about quadratic equations before moving on to study for physics.

Hit a wall on that report at work? Let it go for a while.

“People often think, ‘If I think about this harder I am going to solve this problem.’ But work by clinicians suggests it can actually give you tunnel vision and keep you in a loop that is hard to get out of,” said Banich.

In a counseling setting, the findings suggest that to fully purge a problematic memory that keeps bubbling up, one might need to deliberately focus on it and then push it away.

Someday, the brain imaging technique could potentially be used during sessions as a sort of cognitive mirror to help people learn how to put destructive thoughts out of their minds.

Banich and Lewis-Peacock intend to study that next.

“If we can get a sense of what their brain should look like if they are successfully suppressing a thought, then we can navigate them to a more effective strategy for doing that,” said Lewis-Peacock. “It’s an exciting next step.”

Arteriviruses, which are already common in African monkeys and known to cause fatal outbreaks, appear to have learned how to access human cells, replicate and evade human immune systems—a warning sign these could become next in a long line of viruses to jump from nonhuman primates to people, new laboratory research shows. END_OF_DOCUMENT_TOKEN_TO_BE_REPLACED

Researchers from CU Anschutz and CU Boulder are developing an artificial intelligence tool to diagnose dementia at earlier stages in an effort to curb its progress and plan more effective treatment options. END_OF_DOCUMENT_TOKEN_TO_BE_REPLACED

New research highlights how taming chronic, low-level inflammation through diet, exercise, rest and stress management could help fend off serious and lasting impacts of the virus. END_OF_DOCUMENT_TOKEN_TO_BE_REPLACED
Return to the top of the page