Scientists may have discovered a new ally in efforts to keep coastal communities in the Pacific Northwest safe from future tsunamis, according to a new study: Fleets of commercial shipping vessels.

The research taps into an urgent need for communities like Newport, Oregon, a seaside town that is home to more than 10,000 people. If a tsunami formed along a fault line in the Pacific called the Cascadia Subduction Zone, residents there might have just minutes to get to safety, said study coauthor Anne Sheehan.

“A tsunami can take 20 or 30 minutes to reach the coastline, so the time is very short,” said Sheehan, a fellow at the Cooperative Institute for Research in Environmental Sciences (CIRES) at CU Boulder. 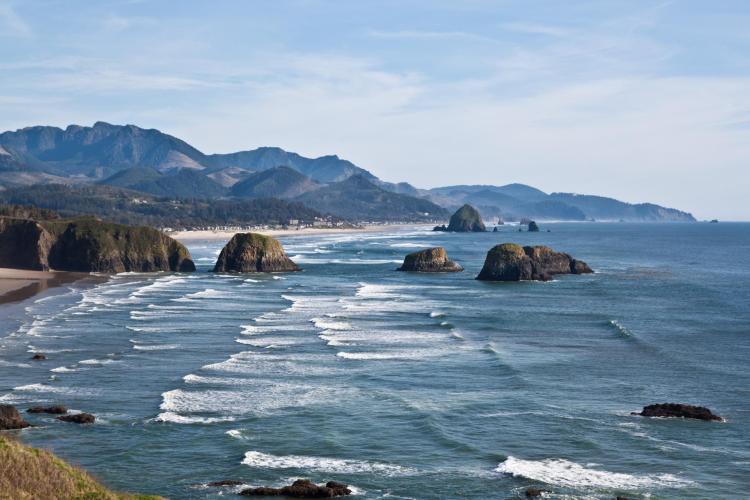 A stretch of the Oregon coast near the town of Cannon Beach. (Credit: CC Photo by Abhinaba Basu via Wikimedia Commons)

In a study now under review in the journal Earth and Space Science, she and her colleagues think that they may have stumbled upon a possible solution. Drawing on computer simulations, the group reports that networks of cargo ships carrying special GPS sensors could, theoretically, work together to automatically monitor a shoreline for possible tsunami waves—spotting these dangerous surges in less than 10 minutes in some cases.

The team will present its findings Thursday, Dec. 10 at the 2020 virtual fall meeting of the American Geophysical Union (AGU).

Lead author M. Jakir Hossen added that this early warning system would be much less expensive to put in place than current tsunami forecasting tools.

“There are so many ships that are already traveling in the Cascadia Subduction Zone area,” said Hossen, a visiting fellow at CIRES. “We’re thinking about how we can use those existing facilities for tsunami forecasts.”

In a geologic sense, the Cascadia Subduction Zone is a bomb waiting to go off. Over the last few decades, scientists have discovered that intense energy seems to be building in the tectonic plates that lie miles below the Pacific Ocean from Northern California to British Columbia.

“They could release this energy anytime and trigger a huge earthquake. The tsunami size could be as big as the 2004 Indian Ocean tsunami,” Hossen said.

But as big as such a wave could be, if you were swimming in the open ocean, you might not even know that you were in the middle of a tsunami. That can make these disasters hard to predict ahead of time, said Sheehan, also a professor in the Department of Geological Sciences.

“Even a really big tsunami wave would be only a meter tall in the open ocean, and it would take 15 minutes to pass you,” she said.

Scientists currently use seafloor sensors to record when a possible tsunami might be passing overhead. But these gauges are costly to install and maintain. Sheehan and her colleagues had a different idea: Why not take advantage of all of the ships that are already out there in the ocean, delivering goods like cars and produce to towns up and down the Pacific Coast? 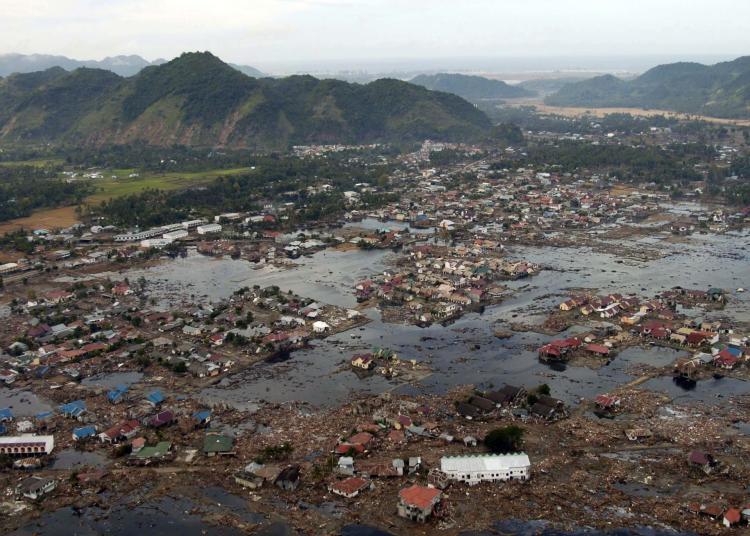 Fallout from the 2004 Indian Ocean tsunami along the Sumatra coast. (Credit: U.S. Navy)

To see if that might be feasible, the researchers ran a mock scenario: They built computer simulations that drew on the locations of real ships near the Cascadia Subduction Zone. They also imagined that each of the digitized ships was carrying a GPS sensor that could precisely measure its elevation, or how it bobbed up and down in the waves. Sheehan explained that such vessels already use satellite systems to transmit their exact locations in the ocean—so the new sensors might only be a modest upgrade.

The team then ran a synthetic experiment to see if ships at those locations might be able to forecast a tsunami.

The test was a success. The findings show that similar networks of ships could be used to identify tsunami waves long before they ever reached shore, and all without needing to diverge from their normal routes.

“A single ship couldn’t do this,” Sheehan said. “The power comes from having 100 ships in the same area that are all going up and down at the same time.”

Scientists at the U.S. National Oceanic and Atmospheric Administration (NOAA) National Centers for Environmental Information based in Boulder collaborated with the team to provide information on current tsunami warning systems and Cascadia tsunami hazards.​

The researchers calculated that, at a minimum, you’d need a web of ships traveling about 12 miles, or 20 kilometers, apart to make accurate tsunami forecasts using their method. Just how much of an advanced warning such a fleet could provide to people onshore isn’t clear. It may depend on where the ships happen to be at that moment.

But Hossen noted that team’s method could, theoretically, be applied in any ocean in the world as long as it had enough shipping traffic—even in regions like the Indian Ocean where the tsunami risk is high but disaster preparedness resources are often scant.

“If we can use these ships, then it would probably be much more affordable for any country, not just developed ones,” he said.

Other coauthors on the new study include David Mencin, a research scientist at CIRES, and Iyan Mulia of the University of Tokyo in Japan.

A collaborative study, including CU Boulder associate professor Andrew McAdam, investigates how the risks and rewards of red squirrel reproduction are a microcosm of evolutionary patterns. END_OF_DOCUMENT_TOKEN_TO_BE_REPLACED

What happens when an expert on natural language processing asks a chatbot to write a children's book in the style of Dr. Seuss? Professor Kai Larsen put the question to the test. END_OF_DOCUMENT_TOKEN_TO_BE_REPLACED

A model of your very own kidney made entirely from soft and pliable polymers? Researchers at two CU campuses are on the cusp of 3D printing realistic replicas of human anatomy. END_OF_DOCUMENT_TOKEN_TO_BE_REPLACED
Return to the top of the page