Banner image: Flour beetles and their reflections explore and feed on flour within a controlled laboratory environment. (Credit: Brett Melbourne)

As species across the world adjust where they live in response to climate change, they will come into competition with other species that could hamper their ability to keep up with the pace of this change, according to new CU Boulder-led research.

The new findings, published this month in the Proceedings of the National Academy of Sciences, confirms previous models showing that competition between species slows their expansion into new territories over multiple generations.

“The experiment shows how interspecies competition can put certain species at greater risk of extinction,” said Geoffrey Legault, lead author of the study, who conducted the research while earning his doctoral degree in ecology and evolutionary biology at CU Boulder. “It has enabled us to improve the ecological models, and that helps us to make better predictions about nature.”

The researchers found that competition between species sets the boundary where species expand their ranges, providing support for including interspecies competition in ecological models and studies that monitor, forecast or manage these changes in the natural world.

To achieve this new finding, the researchers used two species of a small, but resilient insect: the flour beetle.

Flour beetles have been studied since the early 1900s and are a model organism in ecology. In the same way that fruit flies are used as a model organism for studying genetics, flour beetles can represent the fundamental ecology of most organisms and their responses in the lab can be applied to larger ecological trends and patterns in the natural world.

In nature, these tiny creatures live on the ground in the leaf litter and in the bark of trees. While inconspicuous to us, they are common across the world.

In the lab, the researchers lined up a series of 1.5 inch-long plexiglass boxes joined by holes, which they could open and close like fences. The two species of flour beetles were born into opposite ends of this lineup, then observed as their populations expanded across the landscape and competed with each other.

“It’s a microcosm of the larger natural world that allows you to focus in on the core processes of birth, death and movement,” said Brett Melbourne, senior author on the study and associate professor of ecology and evolutionary biology. 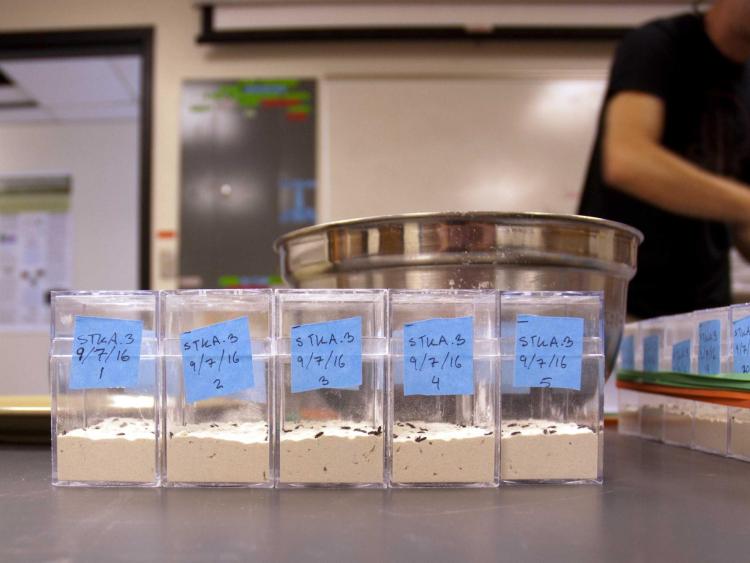 Upon entering Melbourne’s laboratory, you might think you are in a bakery—not a space where scientific experiments are conducted. There is a dusting of flour everywhere and much of the equipment is more what you'd find in a bakery than a lab.

“We even sift the flour like you're supposed to when you're baking something,” said Legault, currently a postdoctoral fellow at the University of British Columbia.

Flour is both the flour beetles’ habitat and their food source—but it’s also a high-demand human food product. The beetles are considered a major stored product pest, as they can get into not only your cupboards, but grain silos and flour mills. As a result, many studies about these insects focus on exterminating them.

But for the researchers, these food pests are perfect for conducting tightly controlled experiments. As the beetles have a short life cycle, observing their populations across many generations can be done within a year.

Yet the work is still intensive. In the year of the experiment, 24 CU Boulder undergraduates assisted Legault and Melbourne in counting more than a million beetles. 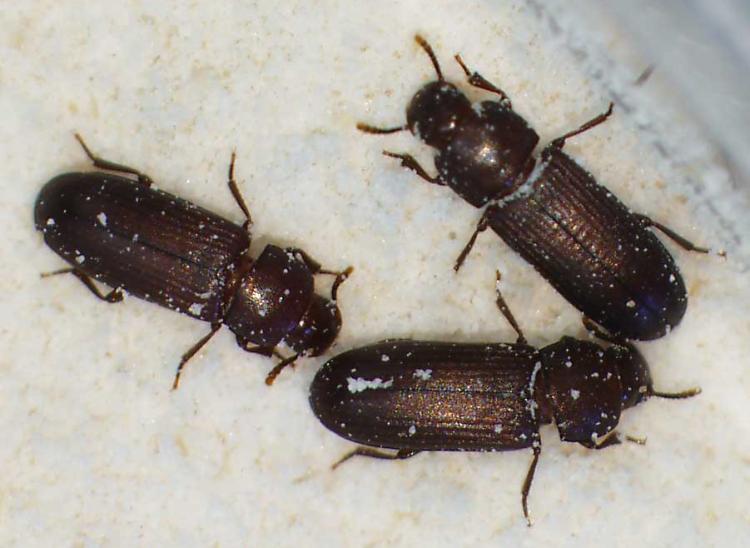 For Melbourne, this research is especially critical in relationship to climate change.

“One way that species are experiencing climate change is that their habitat is moving: It's either going up mountain sides or it's moving toward the poles,” said Melbourne.

In many parts of the world, the pace at which habitats are moving in these northern and upward directions across the globe is more than a kilometer per year, according to Melbourne. That is really fast, especially for species with limited ability to change where they live.

Predictions on how well a species will survive due to climate change moving their habitat often focus on single, individual species. But as many species migrate to new areas, they will encounter established species that already live there. Because the two species may rely on the same food sources or other resources, the survival of both is threatened.

“These kinds of species interactions could be super important for the long-term persistence or extinction of species in response to moving habitats,” Melbourne said.

Additional authors on this paper include Matthew Bitters in the Department of Ecology and Evolutionary Biology at CU Boulder; and Alan Hastings of the University of California and Santa Fe Institute.

Birds that can live at 14,000 feet and also breed at sea level might have evolved more quickly than previously thought. END_OF_DOCUMENT_TOKEN_TO_BE_REPLACED

Despite the Inflation Reduction Act, U.S. progress on climate change remains stuck in a climate conundrum, CU Boulder experts say, hampered by politics, complexity and the scope of the problem. END_OF_DOCUMENT_TOKEN_TO_BE_REPLACED

A CU Boulder-led study shows that between 1985 and 2019 in Brazil’s Atlantic Forest, deforestation decreased and reforestation increased on lands where Indigenous communities had been able to complete a legal process to receive formal recognition of their ancestral lands. END_OF_DOCUMENT_TOKEN_TO_BE_REPLACED
Return to the top of the page