Banner image: A group of rabbitfish dines on algae alongside a lone parrotfish in a coral reef in Thailand. (Credit: Mike Gil)

The new study, published today in the Proceedings of the National Academy of Science, provides the first evidence that these marine ecosystems are highly sensitive to how quickly a target fishing level is reached. Surprisingly, this pattern in the ecosystem is driven by the social behaviors of individual coral reef fish.

In many fisheries, target fishing levels are set with hopes to maximize harvest while keeping the fishery sustainable, year after year. Conventional wisdom suggests that target fishing levels should be approached as quickly as possible to reap benefits immediately. However, researchers say that raising fishing to the same target level a bit more slowly could sustain both a fishery and an ecosystem that would otherwise collapse.

“The ecosystem depends on the pace at which the environment is changing, not just the magnitude,” said Mike Gil, lead author and a Chancellor’s Postdoctoral Fellow in the Department of Ecology and Evolutionary Biology.

The study incorporates the social nature of fish feeding habits into a mathematical simulation of a coral reef ecosystem under fishing pressure. Gil’s previous research has found that even between species, fish look to each other to gauge whether it’s safe to venture out to eat algae from a patch of reef. The more fish at a location, the safer it appears, and more fish are likely to join the feast. This phenomenon is known as a positive feedback.

However, this feedback also works the other way: If there are few or no fish at a location on the reef, then it does not seem inviting or safe. Other fish may also stay away.

“This feedback makes the ecosystem more prone to collapse under fishing pressure but also more prone to recovery as fishing is reduced. Social fish essentially cause the ecosystem to be much more sensitive, overall, and to be hypersensitive to exactly how quickly we remove fish,” said Gil. 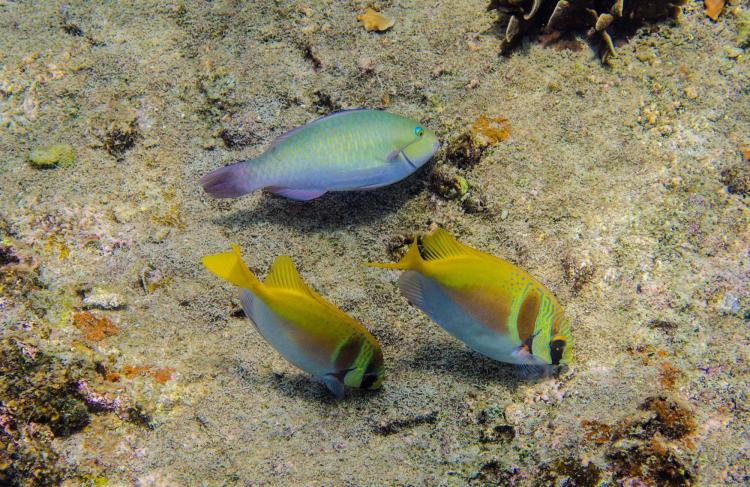 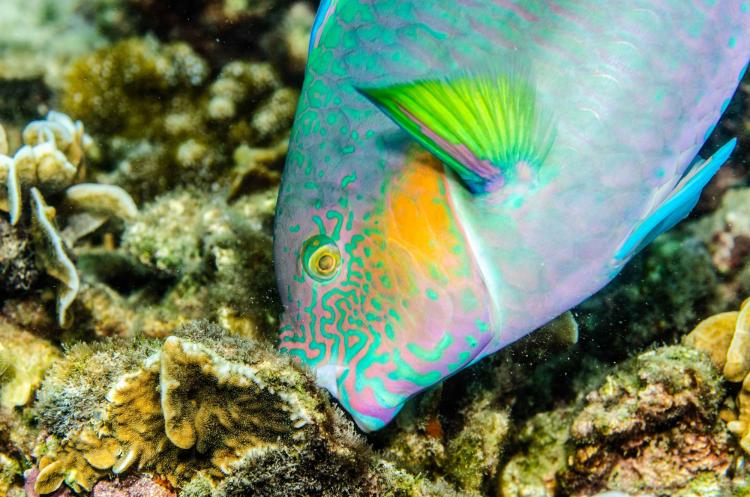 Fish are friends, looking for food

The study used extensive datasets on fish behavior from previous field experiments in coral reefs—even employing the help of artificial intelligence to track exactly what each fish did and saw each second. This rich dataset informed mathematical simulations of the populations of coral, fish and algae.

It’s the first time the social component of individual fish has been included in models like these.

“We've shown that an animal that maybe a lot of folks would assume is kind of dumb is, in fact, embedded in a social network and is highly influenced by its neighbors, just like humans,” said Gil.

The best patches of algae in reefs are often out in open spaces that get a lot of sunlight. But these same locations are where the fish have nowhere to hide if a predator, like a shark, was to come along. The fish are paying close attention to one another, even between species, looking for cues about when it's safe to enter into dangerous parts of the reef and get that satisfying meal.

The fish also stay longer, and each fish eats more in these exposed areas, when there are more fish around, a phenomenon known as positive density dependence. The same type of thing happens if you visit a haunted house: You stay longer and are more likely to make it through the whole experience if you go with a few friends.

An important ecosystem for all

Algae-eating fish provide an important service to the reef. If algae are not kept in check, they can kill coral and destroy the entire reef ecosystem. When there are suddenly fewer fish on the reef due to fishing pressure, the remaining fish venture out less often and eat less algae. This can cause the coral population to collapse, and the ecosystem with it.

Not only do other animals rely on coral reefs for food and shelter, humans also rely on coral reefs because they are nurseries and homes for hundreds of fish species that we harvest. Reefs also provide valuable ecotourism opportunities, buffer the intensity of hurricanes and typhoons before they reach the shoreline and provide hundreds of billions of dollars annually to the global economy.

In addition to fishing, reefs also face other human-caused pressures like nutrient pollution and ocean warming due to global climate change, which caused severe damage to reefs around the world in the last several years.

“Coral reefs are incredibly tough, resilient ecosystems,” said Gil. “But they are not so tough in the face of many challenges happening simultaneously.”

These new findings—on not only how many, but how fast fish can be sustainably harvested—can inform local and regional scale management decisions that deal with fishing quotas.

“As ecologists, we’re trying to understand why we see what we see when we step into nature. And if we understand how these ecosystems function, we can effectively manage them and keep them around for future generations,” Gil said.

The Cooperative Institute for Research in Environmental Sciences at CU Boulder will continue to support the National Oceanic and Atmospheric Administration's Earth system and data science research under a new agreement. END_OF_DOCUMENT_TOKEN_TO_BE_REPLACED

The gut microbiomes of long-dead animals could give researchers surprising insights into how climate change and other factors have shaped the Rocky Mountains over decades. END_OF_DOCUMENT_TOKEN_TO_BE_REPLACED

The Greenland Place Name Committee has named a glacier “Sermeq Konrad Steffen” after the late Konrad Steffen, former director of CIRES, who made exceptional contributions to Greenlandic society and science. END_OF_DOCUMENT_TOKEN_TO_BE_REPLACED
Return to the top of the page