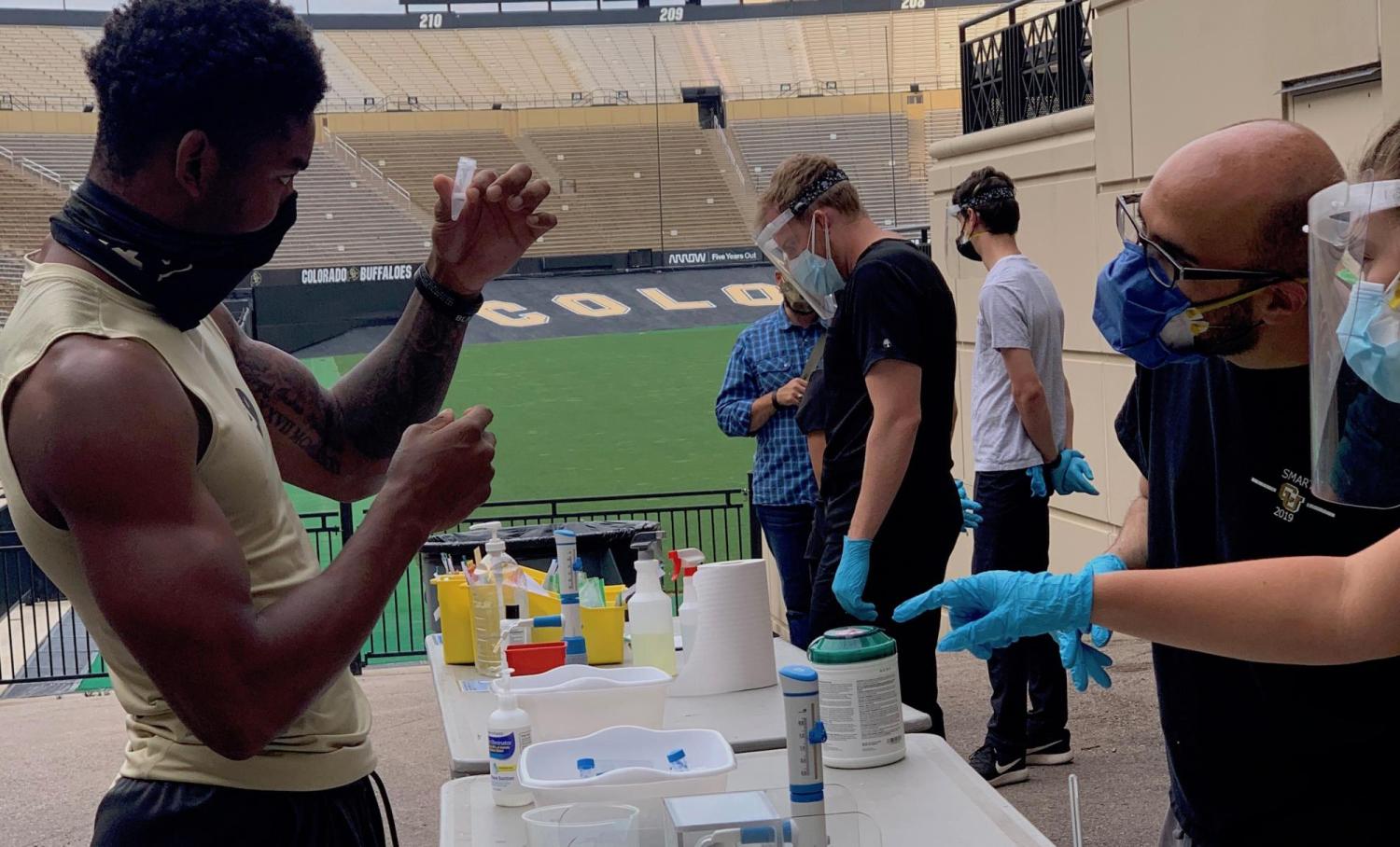 A CU Boulder athlete spits into a tube as part of a new, 45-minute screening test for COVID-19. (Credit: CU Boulder)

CU Boulder researchers, including Sara Sawyer and Matthew McQueen, took part in a series of webinars focusing on how the campus is preparing for the fall semester.

Incoming Buffs moving to campus next week will be among the first to access a new 45-minute COVID-19 test aimed at identifying asymptomatic individuals before they can spread the virus.

Before ever entering a residence hall, they’ll spit in a tube, close the lid, hand it over to a gloved and masked volunteer—and wait.

“The idea is that if we can keep unknowingly infected students from ever stepping into the dorm on the first day, many of those transmission chains that would have started will not start,” said Professor Sara Sawyer, whose team of virologists began work on the so-called RT-LAMP test shortly after word of the novel coronavirus began to make headlines. “It’s an incredible feeling to see something developed in our own lab now out in the world helping people.”

The new test is just the first step in a unique, multi-pronged campus surveillance program being built from the ground up by CU Boulder scientists and staff members.

To work around national bottlenecks that have kept patients in some areas of the country waiting weeks for COVID-19 test results, biochemists at the BioFrontiers Institute have also developed a version of the more sensitive nasal-swab test known as PCR (Polymerase chain reaction).

Meanwhile, epidemiologists from the CU Boulder Department of Integrative Physiology have amassed a team of contact tracers, including about 80 students who are doing it for course credit. They’ll assist fellow students who test positive and help notify those they may have exposed.

“A number of people on campus recognized very early on that, in order to avoid the problems associated with commercial testing and overburdened public health agencies, we needed to develop the capacity to do some things on our own,” said Roy Parker, director of the BioFrontiers Institute, a biomedical research facility that will house two new testing labs. “The community effort among scientists across this campus ever since has been awe-inspiring.”

When more than 7,500 first-year students arrive next week, those who haven’t been tested or who are still awaiting results will begin their day with not one but two tests developed and processed at no cost to the student.

First, they’ll spit in a tube. Then, they’ll scrape a swab across the inside of each nostril. Finally, they’ll hand off their samples to a team of students, postdoctoral researchers or EMTs-in- training who will whisk the samples away for processing. 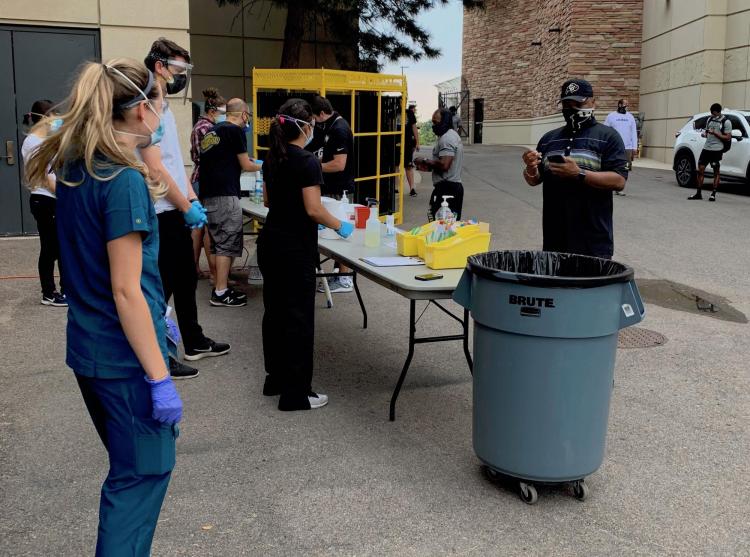 Each test has its pros and cons.

The saliva test, based on a technology known as reverse-transcription loop-mediated isothermal amplification (RT-LAMP), requires little more than pipettes, a heating source and an enzyme mixture that changes color when it interacts with bits of the virus’s genome. If the sample turns from pink to yellow, the test is positive. If it doesn’t, it’s negative.

Results can be returned in as little as 45 minutes.

“It is FDA approved so you can give a clinical diagnosis, and it is slightly more sensitive, but the disadvantage is that it is expensive to run and takes more time and more staff,” said Parker, pointing to nine- to 14-day waits and $100 price tags at labs around the country.

The CU Boulder effort is designed to return results, even for the PCR tests, within 24 hours.

Because the new saliva test is cheap, fast, easily scalable and deployable just about anywhere— think factories, homeless shelters, school campuses—it holds great promise as a “triaging” tool to find the occasional “needle in a haystack” of asymptomatic people, said Sawyer. Her team is currently working with the state of Colorado to further validate the test and make it more broadly available.

The researchers say it’s unlikely that a student would get a positive result on the saliva screening test and then test negative on the diagnostic nasal swab test.

But to cover all bases and get a sense of how the tests compare, CU Boulder will give incoming students both tests.

“Our campus is going to be one of the first places in the country where mass screening of healthy people is being undertaken with two tests on a broad scale,” said Sawyer. “While students wait their 24 hours to get their diagnostic test, they can get a quick read-out that lets them know they should modify their behavior in the meantime.”

Throughout the semester, the campus plans to conduct surveillance test of students both on and off-campus to get a sense of how the virus is moving through the community.
If a student was to test positive at move-in, they would be asked to either return home to isolate or do so at on-campus housing set aside for such use. During the semester, they would be asked to isolate on campus or, if they live off-campus, isolate in place.

“One person, under normal conditions, could infect three or four or more people, but with contact tracing you could get that number down to one or even none,” said integrative physiology Professor Matt McQueen.

In March, McQueen teamed up with Professor Todd Gleeson, director of the Health Professions Residential Academic Program, to develop Public Health Practicum: Contact Tracing, a course that enables students to play a critical role in breaking the COVID-19 transmission chain.

If a student tests positive, the contact tracers, overseen by Medical Services staff, will try to get a sense of anyone the student has been within 6 feet of for 15 minutes or more in the last 48 hours. Then, they’ll reach out to encourage those individuals to quarantine, and offer testing when appropriate.

In the case of a faculty or staff member testing positive, Medical Services has amassed a team of about two dozen staffers and paid temporary workers to serve as contact tracers for that population.

In addition to providing campus with an additional tool for keeping the COVID curve flat and contained, McQueen sees the course as a historic opportunity for students.

“This is something they will tell their grandchildren about years from now,” he said.

In the long-run, studies that grow out of these testing and tracing efforts could help people better prepare for, or even fend off, the next pandemic.

“A year from now, due to the efforts of this scientific community, we will know a lot more about this virus,” said Parker. 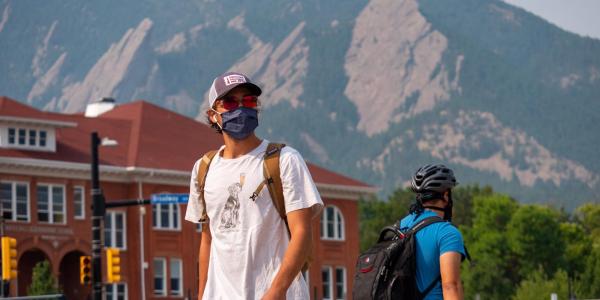 Even outdoors—why face coverings are important

CU Boulder Today chatted with Jose-Luis Jimenez, chemistry professor and CIRES fellow, about why it’s so important to wear a face covering—even when you’re outdoors. END_OF_DOCUMENT_TOKEN_TO_BE_REPLACED 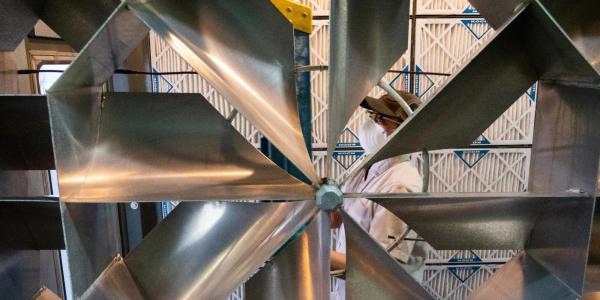 As students return to campus, a mostly behind-the-scenes team of university staff and scientists has been working to make sure that the air they breathe will be as safe as possible. END_OF_DOCUMENT_TOKEN_TO_BE_REPLACED 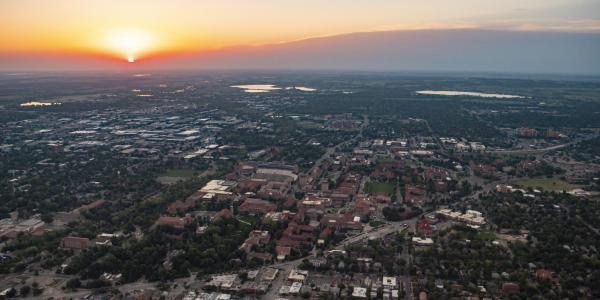 The CU Boulder Police join the Boulder police, Louisville police, Lafayette police, Longmont Public Safety, Boulder County Sheriff’s Office and district attorney’s office in a statement about the sickening and disheartening actions of the Memphis police officers and fire medics involved in the death of Tyre Nichols. END_OF_DOCUMENT_TOKEN_TO_BE_REPLACED
Return to the top of the page