An agricultural field is sprayed with fertilizer or pesticides. (Credit: John Lambeth / Pexels)

A new paper out today in Nature Geoscience identifies fertilizer and pesticide applications to croplands as the largest source of sulfur in the environment—up to 10 times higher than the peak sulfur load seen in the second half of the 20th century, during the days of acid rain.

As a result, CU Boulder researchers recommend greatly expanded monitoring of sulfur and examining possible negative impacts of this increase, including increasing levels of mercury in wetlands, soil degradation and a higher risk for asthma for populations in agricultural areas.

“Sulfur in agriculture is used in many different forms, and we haven't studied broadly how those different forms react in the soil,” said Eve-Lyn Hinckley, lead author of the study, assistant professor of environmental studies and fellow at the Institute of Arctic and Alpine Research (INSTAAR) at CU Boulder. “No one has looked comprehensively at the environmental and human health consequences of these [agricultural] additions.”

Sulfur is a naturally occurring element and an important plant nutrient, helping with the uptake of nitrogen. It’s mined from underground through fossil fuel extraction and for the creation of fertilizers and pesticides. But sulfur is also highly reactive, meaning it will quickly undergo chemical transformations once its stable form surfaces—affecting the health of ecosystems and reacting to form heavy metals that pose a danger to wildlife and people.

Historically, coal-fired power plants were the largest source of reactive sulfur to the biosphere—leading to acid rain in the 1960s and 1970s, and the degradation of forest and aquatic ecosystems across the northeastern U.S. and Europe. Research on this issue prompted the Clean Air Act and its amendments, which regulated air pollution and drove sulfur levels from atmospheric sources down to pre-industrial levels.

“This is a very different problem than the acid rain days,” said Hinckley. “We’ve gone from widespread atmospheric deposition over remote forests to targeted additions of reactive sulfur to regional croplands. These amounts are much higher than what we saw at the peak of acid rain.” 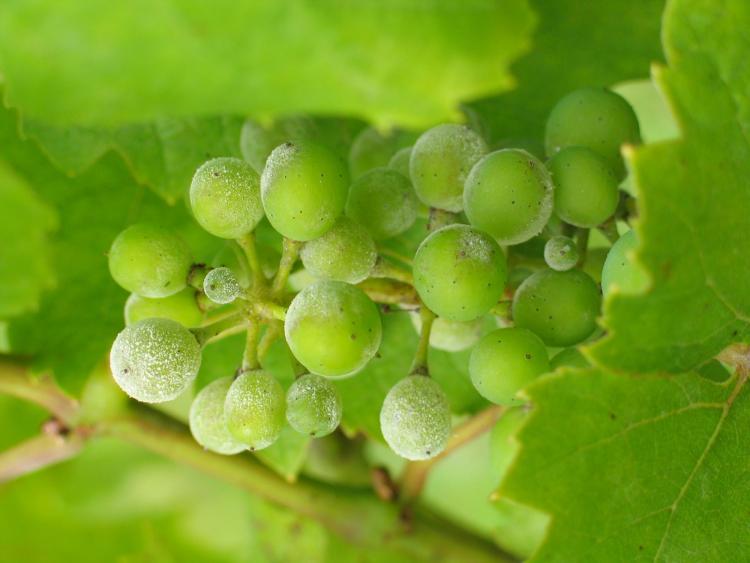 Sulfur is commonly used as a fungicide in vineyards to prevent powdery mildew. (Credit: Maccheek at English Wikipedia, CC BY-SA 3.0)

A majority of the research that examines excess nutrient use in agriculture has been in respect to nitrogen and phosphorus. Scientists have known for a long time that these two chemicals can cause detrimental effects on the environment, including increased greenhouse gas emissions and algae blooms in downstream waters.

Sulfur has long been applied to agricultural lands to improve the production and health of crops, serving as both a fertilizer and pesticide.

“We're moving it through our environment and ecosystems at a much faster rate than it would otherwise,” said Hinckley.

Some agricultural industries around the world have even been putting more sulfur directly on their fields. So far, only isolated studies have given scientists a glimpse into the effects of excess sulfur on soil health and surrounding waters.

In the Florida Everglades, long-term research by the U.S. Geological Survey linked large applications of sulfur to sugarcane to the production of methyl mercury in the Everglades—a potent neurotoxin that accumulates as it moves up the food chain, affecting each predator more than the prey it consumes. This threatens a variety of local wildlife that eat fish, as well as humans.

So the researchers examined trends in sulfur applications across multiple important crops in the U.S.: corn in the Midwest; sugarcane in Florida; and wine grapes in California. Their models of sulfur in surface waters showed that in areas that are recovering from the impacts of acid rain, the amount of sulfur is again increasing.

The researchers predict that increasing levels of sulfur will continue in many croplands around the world, including places like China and India that are still working to regulate fossil fuel emissions.

Hinckley emphasized that simply documenting the impacts of increased sulfur on the environment and human health isn’t enough—increased monitoring and research should include farmers, regulatory agencies and land managers to increase collaboration and collective action on the issue.

“We have an imperative to understand the impact that we're having on the environment,” said Hinckley. “And then we need to work together towards solutions to mitigate those effects.”

Co-authors of this paper include John Crawford, postdoctoral scholar at INSTAAR and researcher in the Sustainability Innovation Lab at Colorado (SILC); and Charles T. Driscoll and Habibollah Fakhraei of the Department of Civil and Environmental Engineering at Syracuse University. Fakhraei has since taken a position at Southern Illinois University.

Mitigating climate change by significantly reducing carbon emissions this decade will require big transitions in all sectors, from energy and transportation to construction and industry. But significant reductions in global emissions are possible, experts say. END_OF_DOCUMENT_TOKEN_TO_BE_REPLACED

Clint Carroll, associate professor in the Department of Ethnic Studies, studies Cherokee access to gathering wild plants and land use management, and tends to the land in his own backyard. END_OF_DOCUMENT_TOKEN_TO_BE_REPLACED

With the planet already warming, technical fixes to addressing a changing climate are important, experts say, but they can only get us so far. We need social fixes, too. END_OF_DOCUMENT_TOKEN_TO_BE_REPLACED
Return to the top of the page