Banner image: Researchers from the BioFrontiers Institute at CU Boulder have developed a saliva-based COVID-19 test which changes colors, from pink to yellow, when it is positive.  Credit: Glenn Asakawa/CU Boulder

CU Boulder researchers have developed a rapid, portable, saliva-based COVID-19 test able to return results in 45 minutes. Such a test might eventually be deployable in community settings like schools and factories, and efforts are underway to conduct further validation tests and seek regulatory approval.

“We are facing a serious testing shortage in this country right now as more people want to get tested and diagnostics labs are overwhelmed,” said Nicholas Meyerson, a postdoctoral associate in the Sawyer Lab at the BioFrontiers Institute at CU Boulder. “We’ve developed a test that could get results to people much faster.” 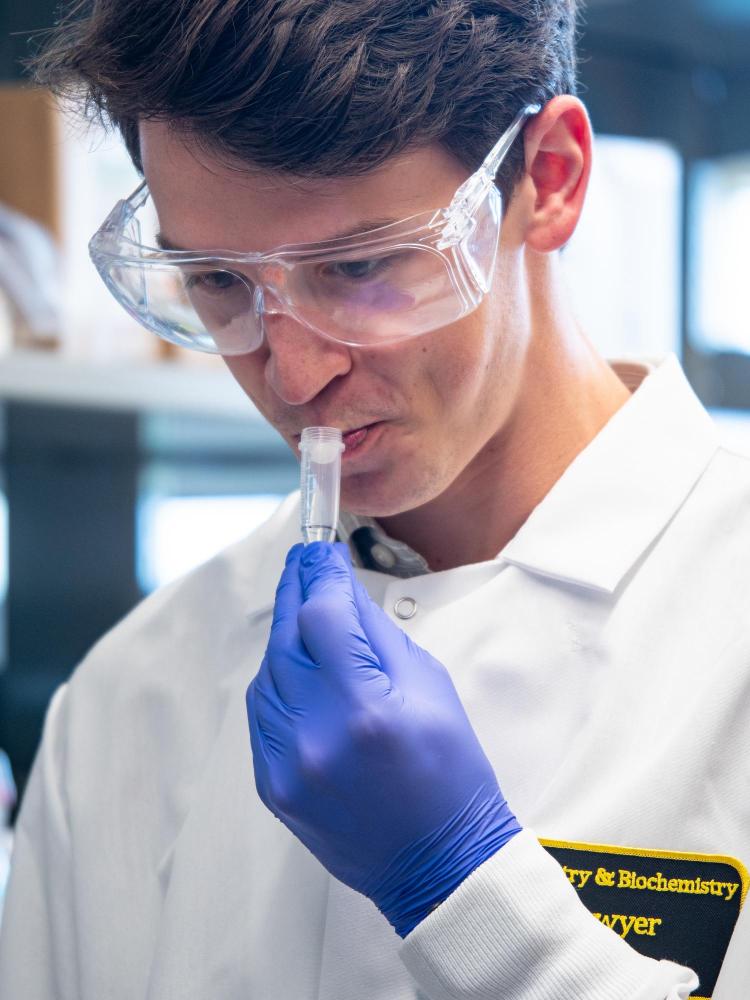 The test, described in a preprint manuscript posted Friday on the online archive MedRxiv.org, is designed for widespread screening to help identify asymptomatic individuals. Research shows people infected with the virus but with no obvious symptoms make up as many as 70% of cases and can still spread disease. In this new test, a user spits in a tube, adds a solution to stabilize it then closes the lid and hands it off to testing staff. They process it through a simple system requiring little more than pipettes, a heating source and an enzyme mixture.

If the sample turns from pink to yellow, the test is positive. If it doesn’t, it’s negative.

Because no swabs are required, and no fancy equipment is needed, the tests are less vulnerable to backlogs and supply chain shortages, the researchers say.

“Every test that has been approved to date requires that the sample, even if it’s saliva, be processed in a clinical diagnostic lab or at a doctor’s office, using sophisticated equipment. That can take up to nine days right now,” said Professor Sara Sawyer, a virologist in the Department of Molecular Cellular and Developmental Biology who led the development of the test.

The test is based on a 20-year-old technology known as reverse transcription loop-mediated isothermal amplification (RT-LAMP) previously used, for instance, to screen mosquitoes for the Zika virus in remote regions of South America.

Once a sample is collected, it is heated to liberate any viral genome present in the test liquid. This sample is then added to three tubes, each containing a custom enzyme mixture which, when heated to a certain temperature, undergoes a chemical reaction when the genetic material from SARS-CoV-2 is detected. That’s the virus that causes COVID-19.

In one experiment described in the paper, the researchers conducted what is known as a “contrived clinical validation.” One researcher spiked 30 out of 60 saliva samples with inactivated SARS-CoV-2 in the lab. Then they shuffled the samples and gave them to another scientist to test with the RT-LAMP technology.

“The test predicted with 100% accuracy all of the negative samples, and 29 of 30 positive samples were predicted accurately,” said Meyerson, noting that the 30th test was scored as inconclusive. Additional second-party validation tests are currently underway.

The authors note that the test is slightly less sensitive than those performed in clinical labs. But a separate computer modeling study, also by researchers at the BioFrontiers Institute, found that quick turnaround for testing is even more critical to curbing the pandemic than test sensitivity is.

“Our modeling showed that whether a test is sensitive or super-sensitive is not that important,” said BioFrontiers Director Roy Parker, co-author of that paper, which has not yet been peer reviewed. “What is important is frequent testing, with the test results returned as fast as possible, which identifies more infected people faster and can limit new infections.”

Ideally, the team sees the test as a “triaging tool.” 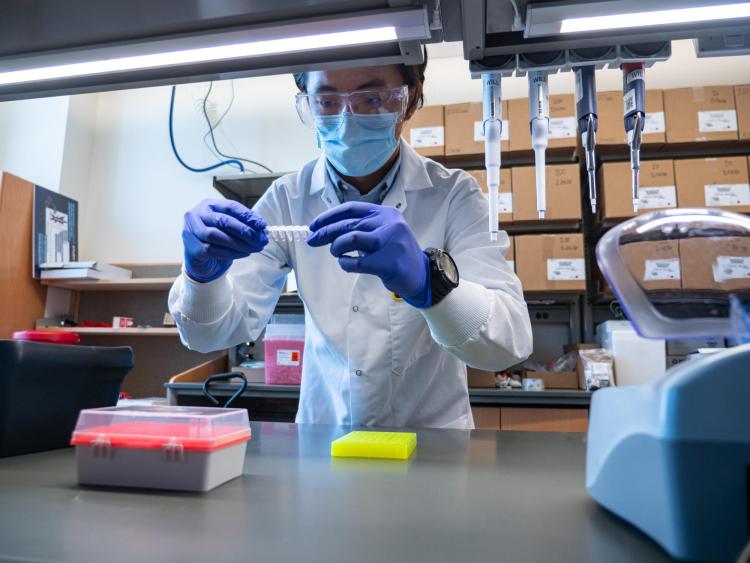 “Those who test positive could quarantine themselves as they await confirmatory testing,” said Sawyer.

The research team, in cooperation with Venture Partners at CU Boulder, has created a spinoff company, Darwin Biosciences, to commercialize the test. The test has not been approved by the Food and Drug Administration yet, but the team has submitted paperwork via the agency's Emergency Use Authorization program. The team is also working with the state to carry out further validation tests locally and, pending those results, expedite regulatory clearance for use in Colorado.

"We are very excited and applaud the scientists at the University of Colorado," said Governor Jared Polis, during a press briefing on Thursday.

The company is also working on a rapid, do-it-yourself test for infectious diseases, known as SickStick, which is based on a different technology and packaged much like an at-home pregnancy test. It hopes to make it available via retail outlets someday.

“While we are all very optimistic about a coronavirus vaccine, scientists have been working on an HIV vaccine for 30 years without success,” said Sawyer. “Meantime, the HIV pandemic showed us that pervasive testing can make a big difference.”

Seventy-eight years ago on Jan. 27, the Auschwitz concentration camp closed after liberation by the Soviet army. Professor Janet Jacobs, who researches genocide, trauma and collective memory, discusses the ways in which the experiences and trauma of Holocaust survivors are passed down through generations. END_OF_DOCUMENT_TOKEN_TO_BE_REPLACED

A model of your very own kidney made entirely from soft and pliable polymers? Researchers at two CU campuses are on the cusp of 3D printing realistic replicas of human anatomy. END_OF_DOCUMENT_TOKEN_TO_BE_REPLACED

Legalizing recreational cannabis does not increase substance use disorders or use of other illicit drugs in adults and may reduce alcohol-related problems, according to new research. The study also found no link between cannabis legalization and increases in cognitive, psychological, social, relationship or financial problems. END_OF_DOCUMENT_TOKEN_TO_BE_REPLACED
Return to the top of the page