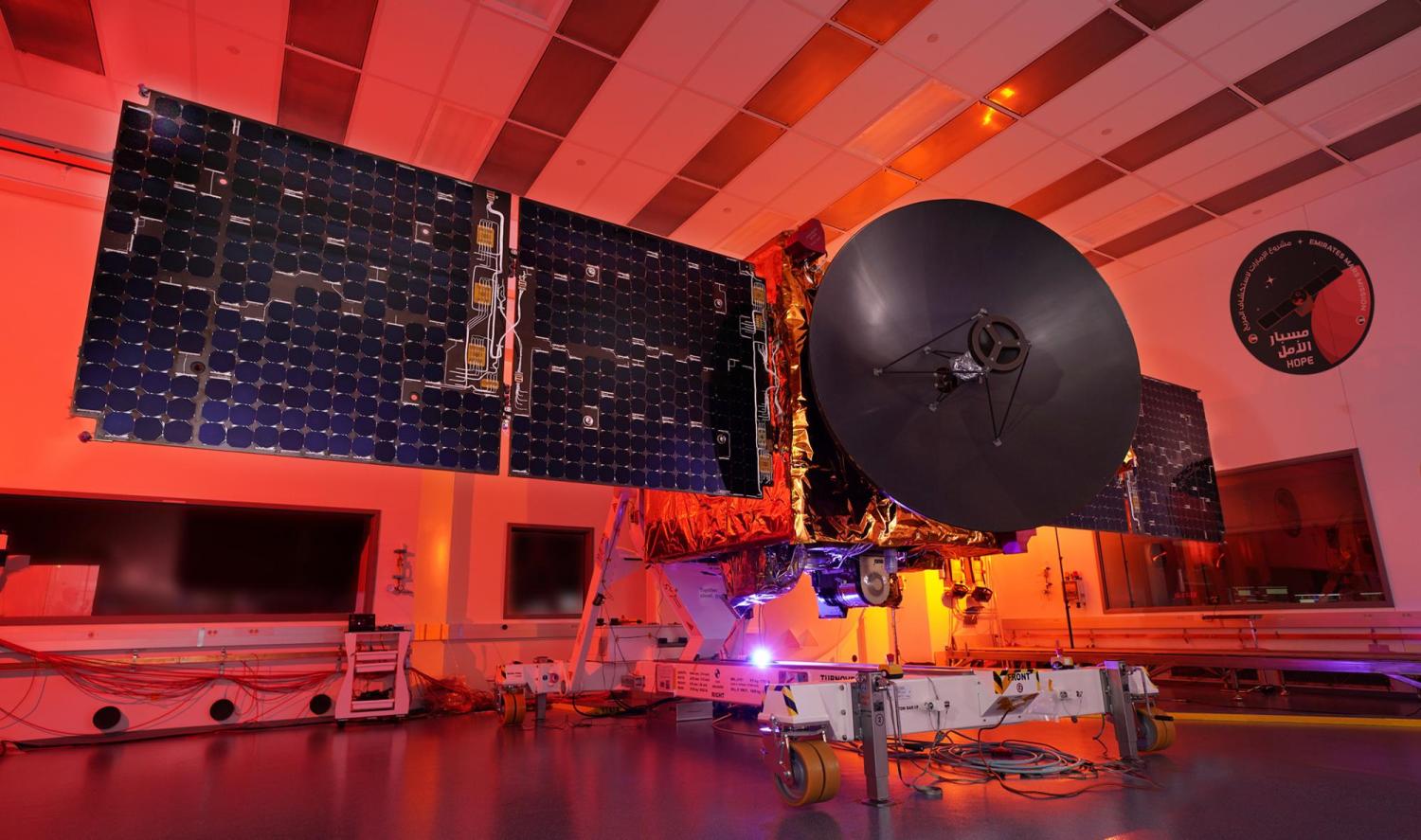 This month, researchers from Boulder and beyond will watch live as a slice of space exploration history launches from a pad on the Japanese island of Tanegashima.

The Emirates Mars Mission (EMM) is slated to blast off aboard an H-IIA rocket. As soon as the weather in Japan behaves, which it hasn’t done recently, the event will mark the first step in the mission's 7-month-long journey to the red planet—the first voyage to another planet undertaken by the Arab world. The mission is led by the Mohammed Bin Rashid Space Centre (MBRSC) in the United Arab Emirates.

How to watch the launch

The EMM launch has been delayed due to weather. Once a new launch time is confirmed, viewers can watch it live online.

The EMM team is “waiting for a clear weather window,” said Omran Sharaf, project director for the mission, “which we expect daily now.”

The launch of the spacecraft, called the "Mars Hope probe," will also be a big moment for the Laboratory for Atmospheric and Space Physics (LASP) at the University of Colorado Boulder. Since 2014, researchers at the institute have worked side-by-side with dozens of young scientists and engineers from the UAE to help them make this mission a reality.

“Hope will capture the ebbs and flows of weather on Mars to a degree that wasn’t possible before," said Daniel Baker, director of LASP. "It’s a showcase for how space exploration has become an increasingly international endeavor."

Read the announcement from LASP

CU Boulder Chancellor Philip DiStefano applauded the efforts of the Colorado scientists and students who worked on the mission and their colleagues overseas.

“This new Mars mission shows Colorado’s growing leadership in the aerospace industry, both here at home and around the world,” DiStefano said. “That our scientists and engineers can share their knowledge with the next generation of space pioneers across borders is inspiring.”

From MAVEN to Hope

For LASP, the Emirates Mars Mission is the latest step in more than 70 years spent exploring the solar system. For example, LASP is the lead research institute for the Mars Atmosphere and Volatile Evolution (MAVEN) mission, which arrived at Mars in 2014. Among other pursuits, the mission investigates how gases escape from the Martian atmosphere into space, leaving the planet with unusually thin air.

Hope science will be complementary to the science data gathered by MAVEN and a number of other orbital missions that have taken atmospheric measurements on the planet. The probe will enter into a unique orbit around Mars, allowing it to observe weather patterns at every point around the red planet and from the top to the bottom of its atmosphere—something that no mission from any country has ever done to date.

“If there’s a dust storm on Mars, changes in temperature, how do those impact rates of atmospheric escape?” said Sarah Al Amiri, EMM’s science lead, in last week’s press conference.

Designing a spacecraft to do all of that was no easy feat, said Pete Withnell, program manager for EMM at LASP.

To finish the project in just six years, the UAE partnered with LASP to assemble and test the spacecraft in facilities on the CU Boulder campus. The UAE’s goal for the project was to “build it not buy it,” according to Sharaf.

Teams worked on both sides of the globe, both separately, and in extended trips and stays. The hands-on experience of building hardware happened primarily in Boulder, but team members experienced cultural exchanges and outdoor adventures in both locations.

The effort was a lesson in how people from different cultures can work together to complete a space mission on time and under budget. Knowledge transfer on the mission came in the form of hands-on learning through an integrated team approach with shared responsibilities.

“There are multiple stories of Emirates engineers who started on the program with perhaps little experience in aerospace and ended up defending complex spacecraft subsystems and designs in front of seasoned review panels,” Withnell said.

Withnell added that the team is confident that EMM will get the job done, but that won’t make the next few weeks any less nerve-wracking. About an hour after the Hope Probe leaves its launch pad, the spacecraft will separate from its rocket and extend its solar panels. From there, it will begin making moves that will take it to Mars—not an easy target to hit from Earth.

“It’s equivalent to an archer hitting a 2-mm target 1 kilometer away,” Withnell said. “This is not for the faint of heart.”

CU Boulder has been selected as a member of the United States Space Command Academic Engagement Enterprise, a new national program designed to expand collaboration and academic exchanges between universities and Space Command. END_OF_DOCUMENT_TOKEN_TO_BE_REPLACED

Since July 2022, a miniature satellite about the size of a shoebox has been orbiting Earth and monitoring how much solar energy reaches the atmosphere, one of the "most important" Earth science measurements. Now, scientists are finalizing their analysis of the first five months of the testing. END_OF_DOCUMENT_TOKEN_TO_BE_REPLACED

The historic spacecraft soon hit Earth's atmosphere flying at speeds of almost 25,000 mph. CU Boulder aerospace engineer Iain Boyd breaks down what will happen to the capsule, and how NASA will keep it safe on reentry. END_OF_DOCUMENT_TOKEN_TO_BE_REPLACED
Return to the top of the page