The colors in this newly discovered phase of liquid crystal shift as researchers apply a small electric field. (Credit: SMRC)

Researchers at CU Boulder’s Soft Materials Research Center (SMRC) have discovered an elusive phase of matter, first proposed more than 100 years ago and sought after ever since.

The team describes the discovery of what scientists call a “ferroelectric nematic” phase of liquid crystal in a study published today in the Proceedings of the National Academy of Sciences. The discovery "opens a door to a new universe of materials," said co-author Matt Glaser, a professor in the Department of Physics. 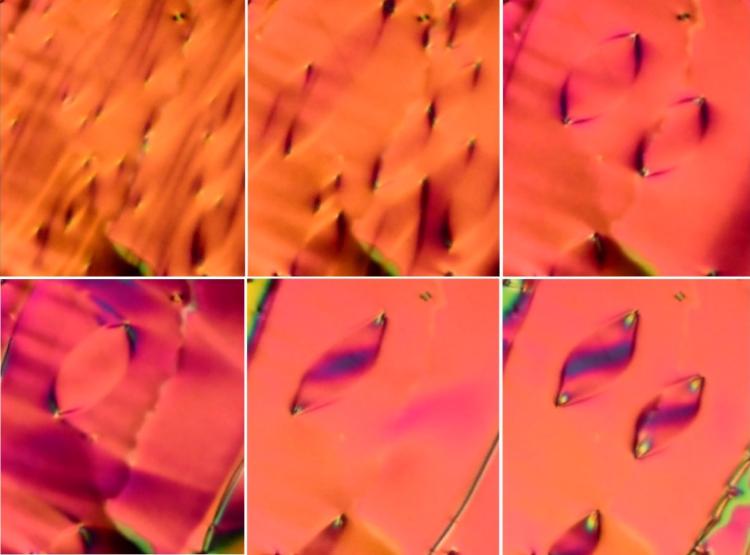 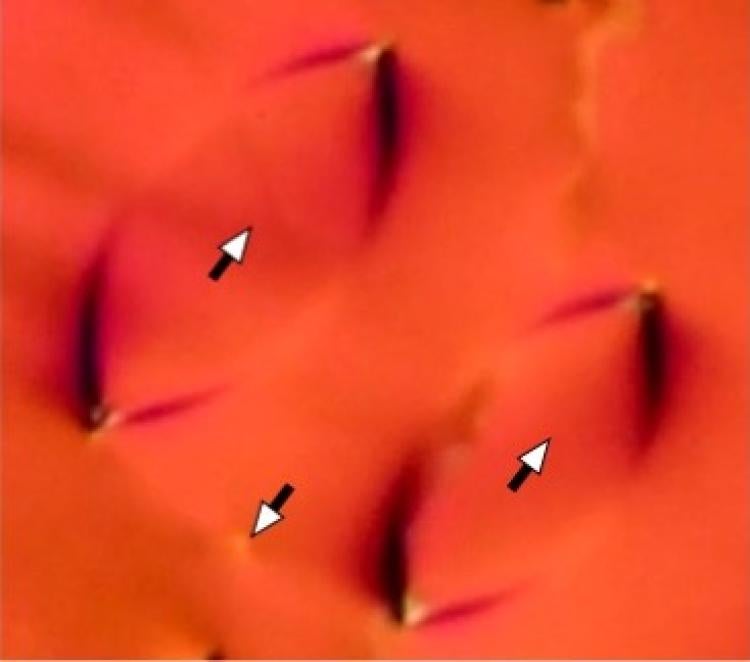 Views of a new phase of liquid crystal as seen under the microscope. The diamond shapes reveal "domains" in which almost all of the molecules take on the same orientation as shown by the arrows (bottom). (Credits: SMRC)

Nematic liquid crystals have been a hot topic in materials research since the 1970s. These materials exhibit a curious mix of fluid- and solid-like behaviors, which allow them to control light. Engineers have used them extensively to make the liquid crystal displays (LCDs) in many laptops, TVs and cellphones.

Think of nematic liquid crystals like dropping a handful of pins on a table. The pins in this case are rod-shaped molecules that are “polar”—with heads (the blunt ends) that carry a positive charge and tails (the pointy ends) that are negatively charged. In a traditional nematic liquid crystal, half of the pins point left and the other half point right, with the direction chosen at random.

A ferroelectric nematic liquid crystal phase, however, is much more disciplined. In such a liquid crystal, patches or “domains” form in the sample in which the molecules all point in the same direction, either right or left. In physics parlance, these materials have polar ordering.

Noel Clark, a professor of physics and director of the SMRC, said that his team’s discovery of one such liquid crystal could open up a wealth of technological innovations—from new types of display screens to reimagined computer memory.

“There are 40,000 research papers on nematics, and in almost any one of them you see interesting new possibilities if the nematic had been ferroelectric,” Clark said.

The discovery is years in the making.

Nobel Laureates Peter Debye and Max Born first suggested in the 1910s that, if you designed a liquid crystal correctly, its molecules could spontaneously fall into a polar ordered state. Not long after that, researchers began to discover solid crystals that did something similar: Their molecules pointed in uniform directions. They could also be reversed, flipping from right to left or vice versa under an applied electric field. These solid crystals were called “ferroelectrics” because of their similarities to magnets. (Ferrum is Latin for “iron”).

In the decades since, however, scientists struggled to find a liquid crystal phase that behaved in the same way. That is, until Clark and his colleagues began examining RM734, an organic molecule created by a group of British scientists several years ago.

When Clark’s team tried to observe that strange phase under the microscope they noticed something new. Under a weak electric field, a palette of striking colors developed toward the edges of the cell containing the liquid crystal.

“It was like connecting a light bulb to voltage to test it, but finding the socket and hookup wires glowing much more brightly instead,” Clark said.

So, what was happening?

The researchers ran more tests and discovered that this phase of RM734 was 100 to 1,000 times more responsive to electric fields than the usual nematic liquid crystals. This suggested that the molecules that make up the liquid crystal demonstrated strong polar order. 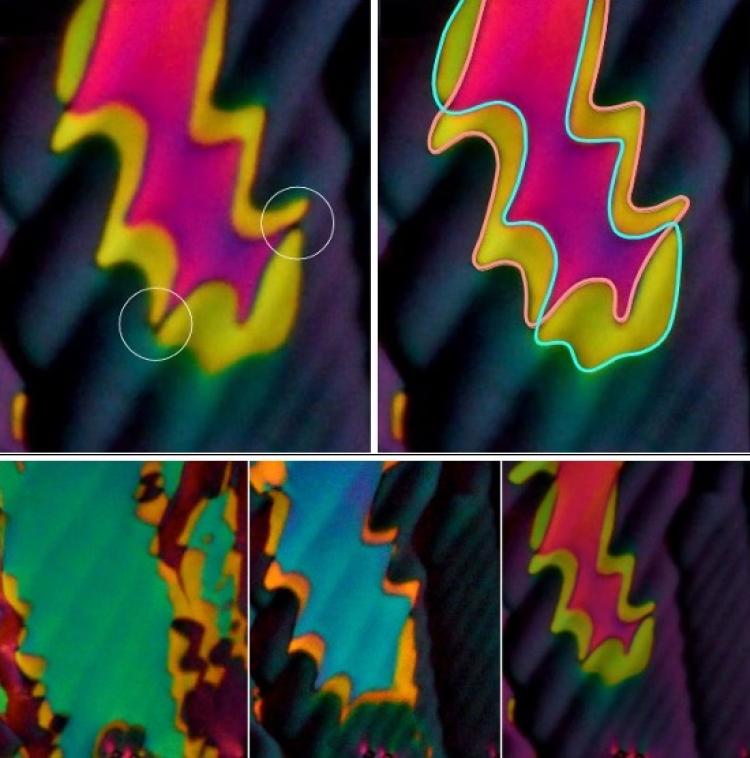 Microscopic image of the wild colors seen in the new phase of liquid crystal. (Credit: SMRC)

“When the molecules are all pointing to the left, and they all see a field that says, ‘go right,’ the response is dramatic,” Clark said.

The team also discovered that distinct domains seemed to form spontaneously in the liquid crystal when it cooled from higher temperature. There were, in other words, patches within their sample in which the molecules seemed to be aligned.

“That confirmed that this phase was, indeed, a ferroelectric nematic fluid,” Clark said.

That alignment was also more uniform than the team was expecting.

“Entropy reigns in a fluid,” said Joe MacLennan, a study coauthor and a professor of physics at CU Boulder. “Everything is wiggling around, so we expected a lot of disorder.”

When the researchers examined how well aligned the molecules were inside a single domain, “we were stunned by the result,” MacLennan said. The molecules were nearly all pointing in the same direction.

The team’s next goal is to discover how RM734 achieves this rare feat. Glaser and SMRC researcher Dmitry Bedrov, of the University of Utah, are currently using computer simulation to tackle this question.

“This work suggests that there are other ferroelectric fluids hiding in plain sight,” Clark said. “It is exciting that right now techniques like artificial intelligence are emerging that will enable an efficient search for them.”

Coauthors on the new paper include CU Boulder researchers Leo Radzihovsky, professor of physics; David Walba, professor of chemistry; and Xi Chen, Eva Korblova and Renfan Shao. Dengpan Dong and Xiaoyu Wei of the University of Utah were also coauthors. 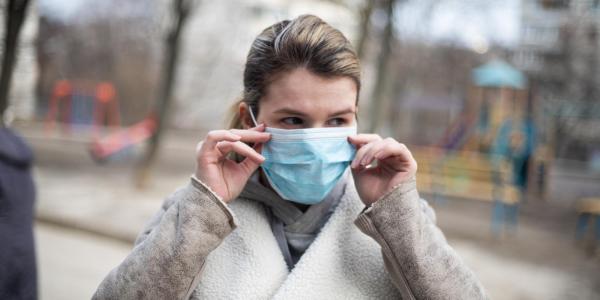 Millions of people died of the coronavirus because institutions and people took too long to recognize it was primarily airborne, and a new study traces back that deadly resistance. END_OF_DOCUMENT_TOKEN_TO_BE_REPLACED 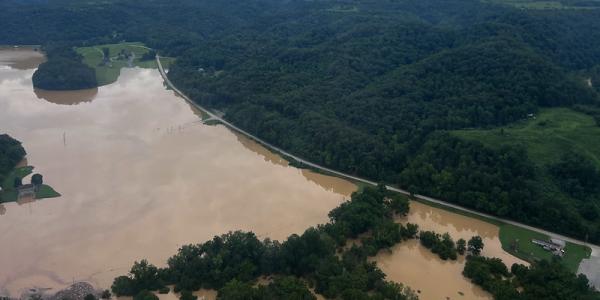 Across the country this summer, flooding has damaged national parks, cities and communities—and left hundreds of thousands of people without clean water in Jackson, Mississippi. Two CU Boulder engineering experts discuss the state of our infrastructure and the impacts of climate change. END_OF_DOCUMENT_TOKEN_TO_BE_REPLACED 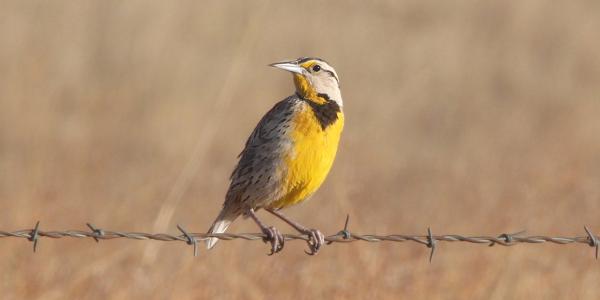 A former CU Boulder undergraduate's honors thesis has led to the official recognition of the Chihuahuan meadowlark as a distinct species. END_OF_DOCUMENT_TOKEN_TO_BE_REPLACED
Return to the top of the page