A granite outcrop at the base of Pikes Peak in Colorado reveals a geological feature called the "Great Unconformity," in which young rocks sit on top of much older stone. (Credit: Christine Siddoway)

A team of geologists led by CU Boulder is digging into what may be Earth’s most famous case of geologic amnesia.

Researchers have spotted that phenomenon, called the “Great Unconformity,” at locations around North America, including in the Grand Canyon and at the base of Pikes Peak in Colorado. There lie sites of missing time, where relatively young rocks dating back about 550 million years sit right on top of much more ancient stone—in some cases more than 3 billion years old.

In other words, a huge chunk of geologic history has vanished from in between.

“Researchers have long seen this as a fundamental boundary in geologic history,” said Rebecca Flowers, an associate professor in the Department of Geological Sciences. 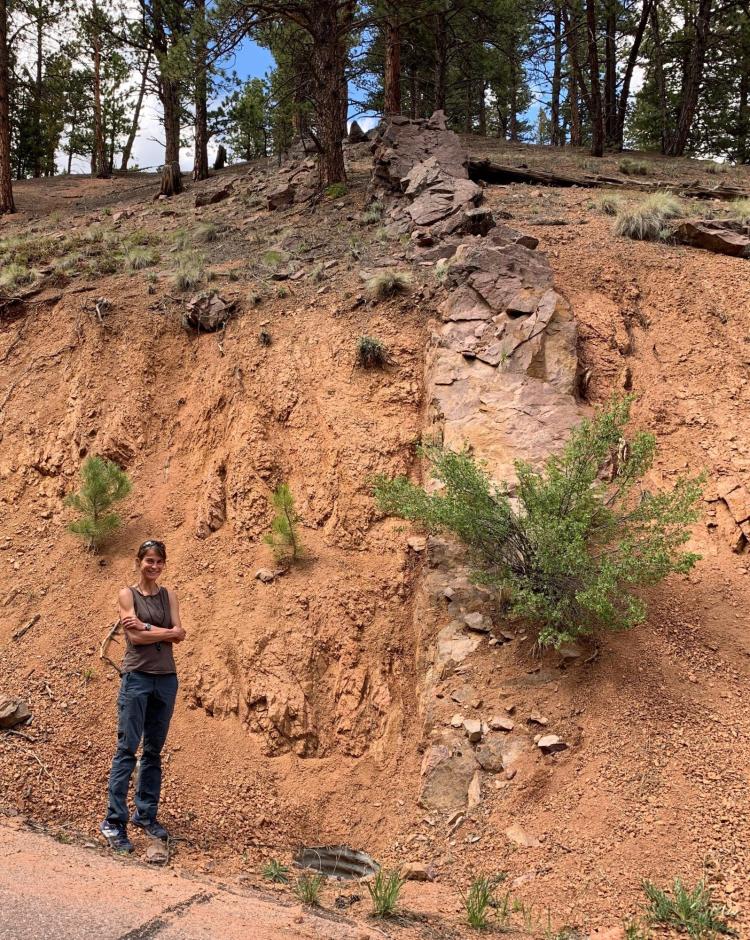 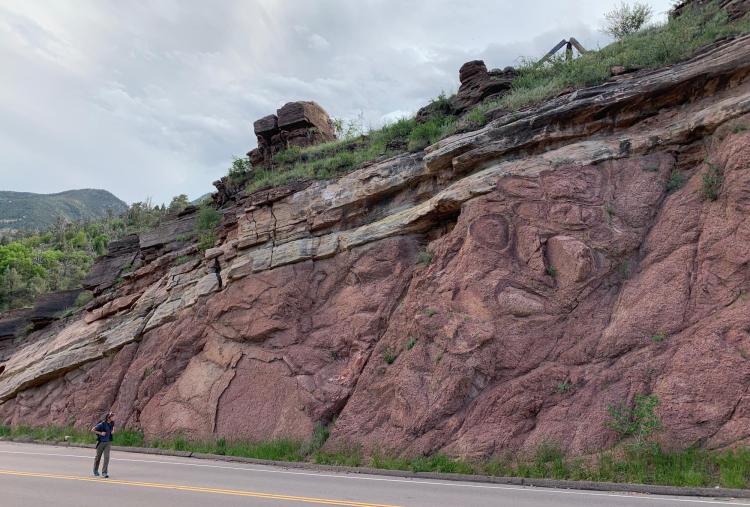 Top: Rebecca Flowers stands near exposed rock on Pikes Peak; bottom: A hiker walks past one site of the Great Unconformity near the town of Manitou Springs, Colorado. (Credits: Christine Siddoway)

For a study published today in the Proceedings of the National Academy of Sciences, she and her colleagues drew on a technique known as “thermochronology” to take a fresh look at that fundamental boundary. They found that the Great Unconformity might not be the result of a single, catastrophic event in the planet’s past like many scientists thought. Instead, a series of smaller calamities may have triggered many different unconformities around the world.

The results could help scientists better understand the flourishing of complex life that occurred not long after that tumult settled down, about 540 million years ago in an era called the “Cambrian Explosion.”

“There is a lot of the geological record that is missing,” Flowers said. “But just because it’s missing doesn’t mean that this history is simple.”

To study that less-than-simple history, Flowers and her colleagues turned to Pikes Peak. In a granite outcrop near the mountain town of Manitou Springs, geologists can find one of the clearest cases of the Great Unconformity.

Follow the strata down, and you will see young rocks—less than 510 million years old—and older “basement” rocks—dating back about 1 billion years. But you won’t find anything in between.

Geologists know that something must have happened in the past to erase all that history, Flowers said. What that was and when exactly it happened, however, are still a mystery.

“Only recently have we had the ability to reach far enough back in time to start filling in that gap,” she said.

Rocks, Flowers said, carry a kind of memory. By probing the particular atoms that have been locked up inside geologic samples, savvy scientists can create a heat-based history of those rocks—essentially, how hot or cold the sample was at various points in its lifetime.

Using that method, the researchers discovered that the Pikes Peak basement rocks were brought to the surface of the planet about 700 million years ago. For Flowers’ team, that finding was key.

When all that rock rose to the surface, she explained, it would have suddenly been at the mercy of wind, snow and other extremes. And those elements could have led to erosion—a lot of erosion—essentially wiping the geologic history of the region clean. Imagine shaking an Etch-a-Sketch but on a monumental level.

“Earth is an active place,” Flowers said. “There used to be a lot more rocks sitting on top of Mount Everest, for example. But they’ve been eroded away and transported elsewhere by streams.”

But what lifted those rocks up in the first place? Flowers and her colleagues think it has something to do with Rodinia. That’s the name of a massive supercontinent—think Pangea, only much older—that formed at Earth’s surface roughly 1 billion years ago.

“At the edges of Rodinia, where you have continents colliding, you’d see these mountain belts like the Himalayas begin to form,” Flowers said. “That could have caused large amounts of erosion.”

The researchers also realized something else: The Great Unconformity might not have been so great in the first place. As Rodinia crashed together then pulled apart over hundreds of millions of years, all that geologic activity may have caused many separate cases of memory loss around the world—not just one.

“We’re left with a feature that looks similar across the world when, in fact, there may have been multiple great unconformities, plural,” Flowers said. “We may need to change our language if we want to think about the Great Unconformity as being more complicated, forming at different times in different locations and for different reasons.”

It’s something to ponder the next time you go for a hike on Pikes Peak.

Coauthors on the new study include Rachel Havranek, a graduate student in Geological Sciences at CU Boulder; Francis Macdonald of the University of California, Santa Barbara; and Christine Siddoway of The Colorado College.

What happens when an expert on natural language processing asks a chatbot to write a children's book in the style of Dr. Seuss? Professor Kai Larsen put the question to the test. END_OF_DOCUMENT_TOKEN_TO_BE_REPLACED

A model of your very own kidney made entirely from soft and pliable polymers? Researchers at two CU campuses are on the cusp of 3D printing realistic replicas of human anatomy. END_OF_DOCUMENT_TOKEN_TO_BE_REPLACED

For people who are blind or visually impaired, finding the right products in a crowded grocery store can be difficult without help. A team of computer scientists at CU Boulder is trying to change that. END_OF_DOCUMENT_TOKEN_TO_BE_REPLACED
Return to the top of the page