To divide or not to divide? The mother cell may decide

When do cells decide to divide? For 40 years, the textbook answer has been that this decision occurs in the first phase of a cell’s existence – right after a mother cell divides to become daughter cells.

But researchers at CU Boulder have found that it’s actually the mother cell that determines if its daughter cells will divide. The finding, explained in a new study out today in Science, sheds new light on the cell cycle using modern imaging technologies, and could have implications for cancer drug therapy treatments.

“We see something different than what's in the textbooks,” said Sabrina Spencer, senior author of the paper and assistant professor of biochemistry.

Cells choose to divide based on the amount of mitogens, or growth factors, they sense in their environment. The availability of mitogens drives the signal to proliferate: duplicate cellular contents and divide into two daughter cells. This is all part of the cell cycle.

Cancer cells can enter the cell cycle even if growth factors aren't there, said Spencer. That’s part of why they proliferate so much – the cell cycle becomes dysregulated and growth continues unchecked. 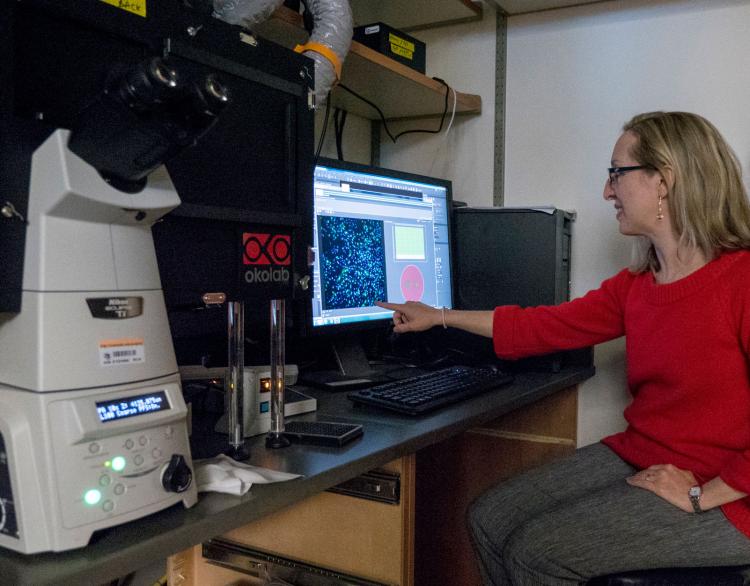 Sabrina Spencer points to a specific cell in an image on a screen, which contains a population of cells expressing fluorescent reporters.  (Credit: BioFrontiers Institute, CU Boulder)

Better understanding of why and when cells choose to proliferate, could help scientists tailor or expand the timing of cancer drug therapies.

In their experiments, the researchers found that rather than daughter cells deciding on their own whether to divide, they committed to another cell cycle or not immediately after division of the mother cell. This implies the decision was made in the previous cell cycle, because the daughter cells were already born on one path or another, according to Spencer.

“That got us thinking that maybe all the sensing of the environment is actually happening in the mother cell cycle,” said Spencer.

Previous textbook experiments had to first remove all growth factors in order to synchronize the cells’ cycling, which perturbs cell cycle behavior. But this new research used time lapse microscopy and cell tracking technologies, which allowed the scientists to film cells doing their own thing, on their own time.

The researchers tracked thousands of cells across 48 hours, using computational cell tracking – which can track the same cell through hundreds of sequential images.

Even 10 years ago, very few labs could track cells even for a couple of hours, said Spencer.

A mother cell divides into two daughter cells, and the daughter cell is trying to decide if it is going to divide again. The answer is that it depends on the mother cell’s history of growth factor signaling. (Credit: Sabrina Spencer) 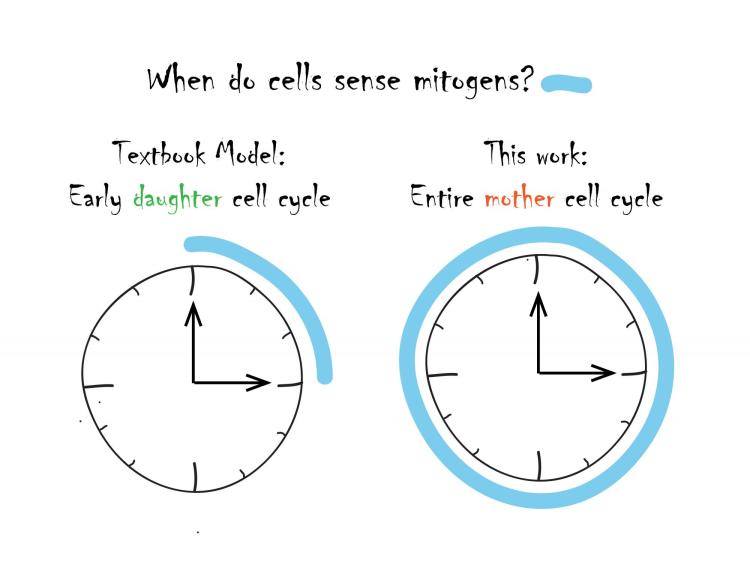 When do cells care about mitogens (growth factors)? In the textbook model, researchers had found that a daughter cell cared in the first phase of its cell cycle. From this new research, CU Boulder scientists found that cells are actually sensing mitogens during the entirely of the mother cell cycle. (Credit: Sabrina Spencer)

Their next question was: when in the mother cell cycle does a cell decide if its daughter cells will divide?

To answer this, the researchers removed and replaced the growth factors – which give the signal for the cell to divide – for several hours at different phases in the mother cell cycle.

“We found that no matter when you blocked this signaling, cells can sense it,” said Mingwei Min, first author and postdoctoral researcher in the Department of Biochemistry and BioFrontiers Institute. “And not only can they sense it, they can remember that information for many hours, all the way through to the daughter cell cycle.”

If cells are continually sensing growth factor signaling – as this new paper found – instead of only in the first phase of the daughter cycle, cancer drugs may have a longer window than previously believed to provide therapeutic effects.

But how are cells remembering the availability of growth factors? The key lies in a protein known as Cyclin D.

Normally, Cyclin D rises up in the second half of the cell cycle in the mother cell. But when growth factors were removed and replaced in the experiment, there was less Cyclin D at the end of the mother cell cycle, the study found.

And without as much Cyclin D, the daughter cells have less of the thing they need to be able to divide.

“The fact that cells can store memory – or integrate past history – of growth factor availability is a new finding,” said Spencer. “The combination of fluorescent sensor design, long-term time-lapse microscopy, and cell tracking is really our forte that enabled this discovery.”

Additional authors on this paper include Yao Rong and Chengzhe Tian of the Department of Biochemistry and the BioFrontiers Institute at CU Boulder.

A collaborative study, including CU Boulder associate professor Andrew McAdam, investigates how the risks and rewards of red squirrel reproduction are a microcosm of evolutionary patterns. END_OF_DOCUMENT_TOKEN_TO_BE_REPLACED

What happens when an expert on natural language processing asks a chatbot to write a children's book in the style of Dr. Seuss? Professor Kai Larsen put the question to the test. END_OF_DOCUMENT_TOKEN_TO_BE_REPLACED

A model of your very own kidney made entirely from soft and pliable polymers? Researchers at two CU campuses are on the cusp of 3D printing realistic replicas of human anatomy. END_OF_DOCUMENT_TOKEN_TO_BE_REPLACED
Return to the top of the page