A star called HD 189733b located about 64.5 lightyears from our solar system shines on a planet about the size of Jupiter. (Credit: NASA/ESA)

A new spacecraft proposed by scientists at CU Boulder could soon be NASA’s nose in space, sniffing out the environments beyond Earth’s solar system that might host planets with thick atmospheres.

Astrophysicist Kevin France is leading the development of that mission, called the Extreme-ultraviolet Stellar Characterization for Atmospheric Physics and Evolution (ESCAPE). He’s hoping it will provide the critical reconnaissance work in humanity’s search for life far away from home.

“NASA and the entire astronomical community have made the search for signs of life on exoplanets a priority,” said France, an assistant professor in the Laboratory for Atmospheric and Space Physics (LASP) and the Department of Astrophysical and Planetary Sciences (APS). “We believe that detectable life outside the solar system probably relies on the presence of an atmosphere.”

This month, the space agency gave him and his colleagues an important go-ahead to start the hunt for habitable environments: ESCAPE will be one of two candidates vying to be the next satellite to launch under NASA’s ambitious Explorers Program. 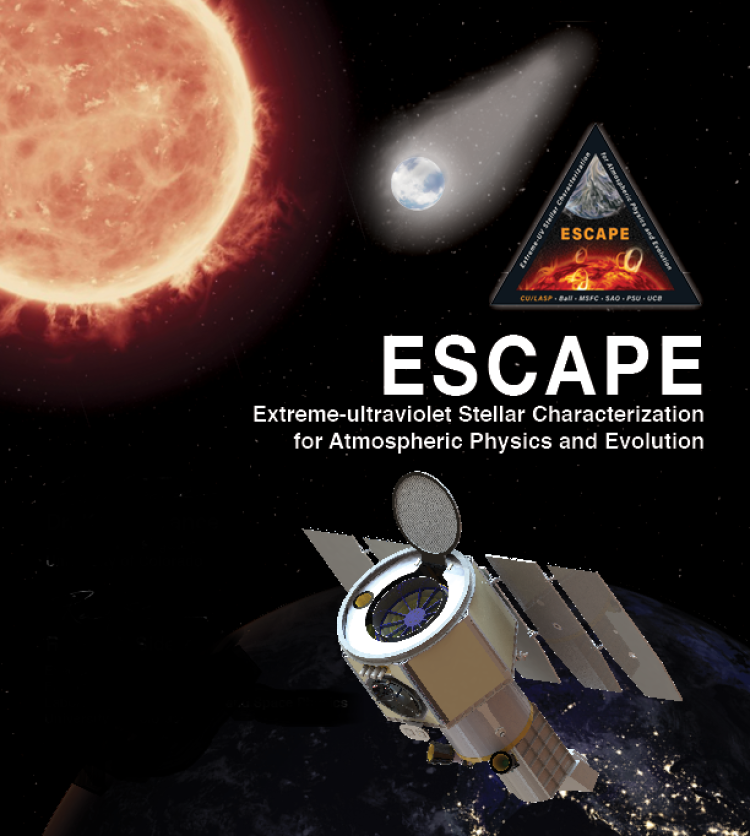 If selected, the mission, which would have a budget of no more than $145 million, could pack a lot of scientific punch for the cost.

“These promising proposals under the Explorers Program bring out some of the most creative, innovative ways to help uncover the secrets of the universe," said Thomas Zurbuchen, associate administrator of NASA’s Science Mission Directorate, in a statement. "From studying stars and planets outside our solar system to seeking answers to the largest cosmic mysteries, I look forward to the breakthrough science from these modest size missions.”

The proposed mission, a joint effort of LASP, JILA and the Center for Astrophysics and Space Astronomy (CASA) at CU Boulder, wouldn’t seek out exoplanet atmospheres directly. Instead, ESCAPE would take a close look at distant stars.

Allison Youngblood, a research scientist at LASP, explained that some stars probably don’t make good homes for habitable planets. In particular, stars that spit out a lot of high-energy radiation—in this case, extreme ultraviolet light—can strip the atmospheres away from orbiting worlds. Think of it like a strong gust blowing through a pile of leaves.

“This high-energy radiation is absorbed in the highest layers of a planet's atmosphere and regulates the escape of an atmosphere to space,” said Youngblood, part of France’s ESCAPE team. “We must measure the extreme ultraviolet radiation from exoplanet host stars to be able to say whether or not exoplanets can hang on to their atmospheres.”

Over the course of its proposed two-year mission, which could begin in 2025, ESCAPE would survey the radiation streaming from more than 200 stars.

By doing that, France hopes to narrow down the list of the spots where scientists might expect to find the signals of flourishing life.

“We’re going to be able to make a road map of the most promising habitable worlds that NASA will spend its resources studying over the next 20 years,” France said.

For now, he and his colleagues are buckling down. NASA has given the team $2 million dollars to develop their concept for ESCAPE further, and the agency will make its final decision in 2021.

ESCAPE also makes use of a new type of telescope design—one that would be capable of measuring the faint extreme-ultraviolet radiation from distant stars, data that astronomers have so far not been able to collect.

“Over the next nine months, we’re going to be making and testing engineering models of some of the more critical parts of the system in order to demonstrate that our design is actually going to perform as well as we think it’s going to,” said Brian Fleming, a research professor at LASP and the instrument scientist for ESCAPE.

In other words, the researchers have some busy months ahead of them.

“We were extremely excited when we found out we were selected,” France said. “Then maybe a day later it hit us that, ‘Oh my gosh, we actually have to do all this.’ It’s very gratifying to see it all come together and for NASA to be excited about it.”

Other CU Boulder members of the ESCAPE team include Zachory Berta-Thompson and Adam Kowalski, assistant professors in APS; James Green, a professor in APS; and Jeffrey Linksy of JILA; and James Mason and Nick Kruczek, research scientists at LASP. Tom Patton leads the project’s engineering team at LASP.

The effort also brings together researchers from the Ball Aerospace, Southwest Research Institute, and the National Solar Observatory, based in Boulder.  ESCAPE also has science and technical partners at NASA’s Marshall Space Flight Center and numerous other universities and science institutions around the world.

A first-of-its-kind sensor, developed by a team at the Laboratory for Atmospheric and Space Physics, will measure sunlight reflecting from Earth with more accuracy than any instrument in space or on the ground. END_OF_DOCUMENT_TOKEN_TO_BE_REPLACED

Ahead of the historic space mission, crew members joined CU Boulder researchers Allie Anderson and Torin Clark to talk about how the eye changes in space, experiencing "space motion sickness" and more. END_OF_DOCUMENT_TOKEN_TO_BE_REPLACED

NASA’s Orion spacecraft blasted off this morning from Florida in the first stage of its 25-day journey to circle the moon and return to Earth. Two CU Boulder scientists talk about what lies in store for the space agency’s ambitious Artemis Program. END_OF_DOCUMENT_TOKEN_TO_BE_REPLACED
Return to the top of the page