A graphic illustrating how massive ejections of energy from the sun slam into Earth's magnetosphere, a protective shield created by our planet's magnetic field. (Credit: NASA's Goddard Space Flight Center)

Scientists at CU Boulder will soon pursue two fundamental questions around Earth’s connections with the sun: Can winds blowing over mountains in places like Boulder kick off a chain of events that might influence the orbit of satellites in space? And what makes a planet habitable?

NASA announced earlier this month that it would fund two new science centers to study those same questions at the Laboratory for Atmospheric and Space Physics (LASP).

They are among the nine projects launching at institutions nationwide through NASA’s Diversify, Realize, Integrate, Venture, Educate (DRIVE) Science Center initiative and will seek to explore the dynamics of the sun in all their complexities.

Professor Cora Randall and Associate Professor David Brain will lead the LASP centers, each of which will receive $1.3 million over two years. At the end of that time, both projects will also be eligible to apply for additional funding of up to $15 million.

“The centers led here at LASP will explore connections from the sun into Earth's deep atmosphere and will also help us to understand the key role that global planetary magnetic fields play in the origin and sustenance of life,” said Daniel Baker, director of LASP. “It is immensely exciting that LASP research can push back the frontiers of knowledge with basic research programs like the DRIVE centers in harmony with major space flight missions for which LASP is also renowned.”

From the surface up 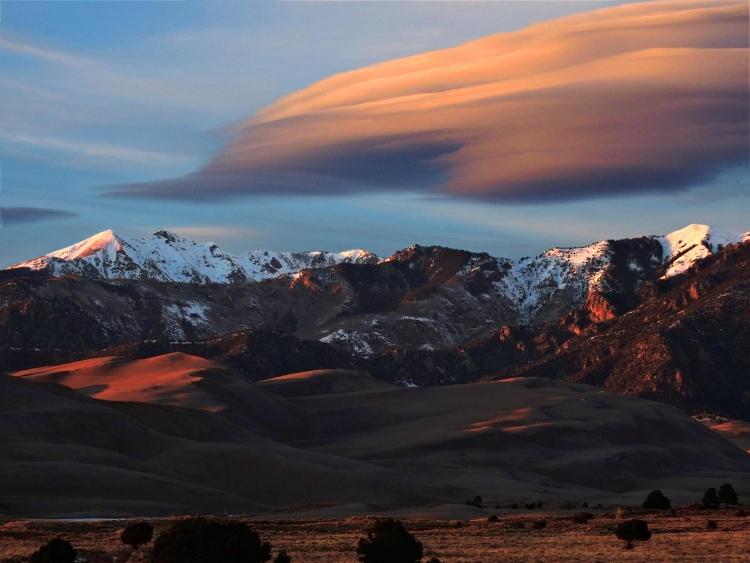 Your daily forecast for Boulder: windy with a chance of gravity waves.

Cora Randall, also in the Department of Atmospheric and Oceanic Sciences, will lead a new center called Wave-induced Atmospheric Variability (WAVE). It will focus on a windy phenomenon that Front Range residents can observe in the layer cake-shaped clouds that form over the Rocky Mountains.

“As the air comes in, it goes up over the mountains. Gravity pulls it back down, but then air is buoyant, so it comes back up again. It winds up making this wave in the air,” Randall said. “We see the effect of this in the lenticular clouds that form over Boulder.”

Those squiggles, dubbed gravity waves, can also trickle up toward the top of Earth’s atmosphere. There, they may shift the interactions between our planet and its sun, creating a “space weather” environment that can degrade GPS transmissions, navigation and surveillance systems.

“This space weather is determined by things like the solar wind, solar flares and changes in Earth’s magnetic field,” Randall said. “But it is also driven by these gravity waves, so it’s all connected.”

Her center will seek to better understand that ripple effect, pulling together observations of gravity waves from diverse instruments. 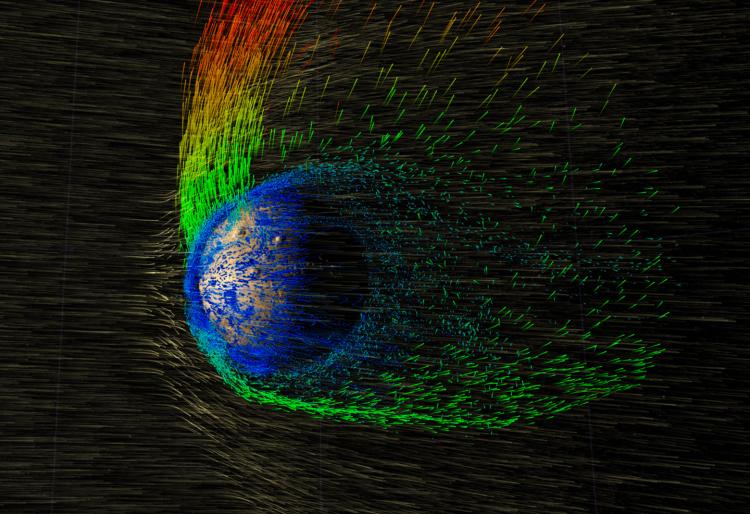 Blasts of energy from the sun can strip away at Mars' already thin atmosphere, according to findings from NASA's Mars Atmosphere and Volatile EvolutioN (MAVEN) mission. (Credit: NASA's Goddard Space Flight Center)

Brain and his colleagues in the Magnetic fields, Atmospheres, and the Connection to Habitability (MACH) center will explore a question much farther from home: Which planets beyond Earth’s solar system are most likely to host life?

The answer hinges on atmospheres—and, in particular, whether planets need a strong magnetic field, like the one around Earth, in order to hang onto their gases. Brain explained that magnetic fields act as a sort of protective barrier in space, shielding planets from the barrages of energy that stars eject on an ongoing basis.

“When I started my career, I thought it was a foregone conclusion that a magnetic field was necessary for retaining an atmosphere,” said Brain, also in the Department of Astrophysical and Planetary Sciences. “But a combination of scientific observations and computer modeling work has led this to become an open question.”

MACH researchers will pursue that open question through a natural experiment in our own solar system. They’ll compare dynamics in Earth’s atmosphere to similar processes on Venus and Mars, neither of which have global magnetic fields.

“In 25 years, we’ve gone from not knowing whether there are planets outside our solar system to having too many to make sense of,” Brain said. “Anything we can do to help narrow the list of candidates for habitable worlds would be helpful.”

CU Boulder geologist Lisa Mayhew serves on the science team for NASA’s Perseverance rover, an intrepid machine that has crossed over nearly 8 miles of the surface of Mars—and is helping to recreate the forces that shaped this planet into what it looks like today. END_OF_DOCUMENT_TOKEN_TO_BE_REPLACED

On Monday, NASA’s Double Asteroid Redirection Test slammed into an asteroid called Dimorphos at speeds of more than 14,000 miles per hour. CU Boulder aerospace engineer Jay McMahon breaks down how this test could one day help to protect life on Earth. END_OF_DOCUMENT_TOKEN_TO_BE_REPLACED

In two years, a dust analyzer designed and built at CU Boulder will launch aboard NASA’s Europa Clipper spacecraft, aiding in its mission to determine if Jupiter's icy moon Europa has conditions that could support life. END_OF_DOCUMENT_TOKEN_TO_BE_REPLACED
Return to the top of the page