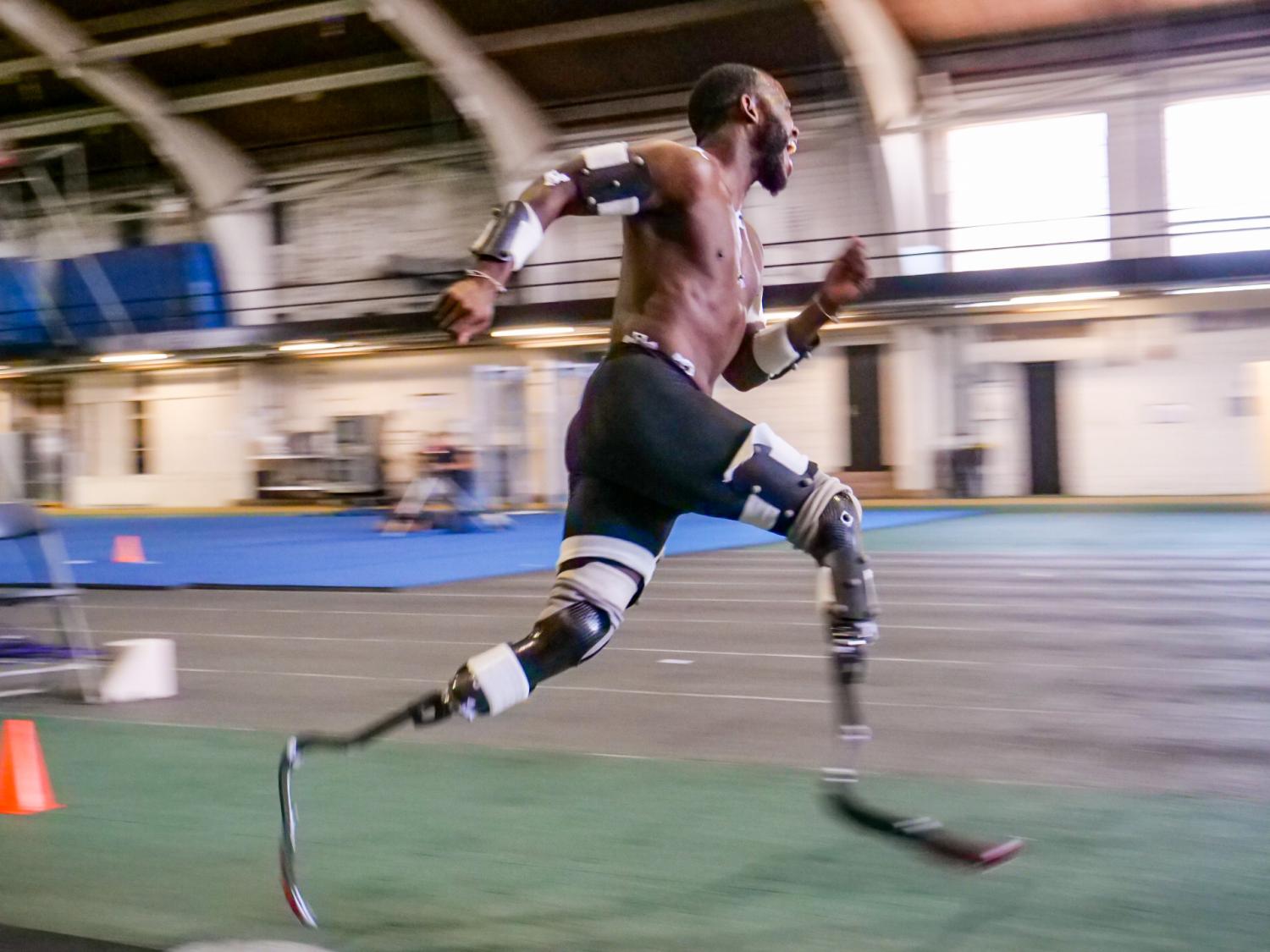 Olympic hopeful Blake Leeper sprints around the track during a visit to Balch Fieldhouse in 2018. A new study suggests height is not necessarily an advantage for athletes like Leeper. Credit: Glenn Asakawa/CU Boulder

Before hitting the track to compete in an officially sanctioned race, some elite Paralympic sprinters must do something most runners would find incredibly unsettling: remove their legs and swap them out with ones that make them shorter.

But a first-of-its kind CU Boulder study published Feb. 20 in the journal PLOS ONE concludes that isn’t the case.

“We found that height makes no difference when it comes to maximum speed,” said senior author Alena Grabowski, an assistant professor in the Department of Integrative Physiology and director of the Applied Biomechanics Laboratory. “These athletes are having to buy new configurations and go through a lot of hardship and expense for a rule that is not based in science.”

For the study, Grabowski and her co-authors recruited five elite sprinters with double below-the-knee amputations for a series of running trials on a treadmill. The runners sampled three different brands of blades, and five different combinations of stiffness and height within each brand for a total of 15 different tests. In each test, they were asked to start at a jog and push themselves to the maximum speed possible, with some achieving speeds as fast as 10.8 meters per second —about a 2-minute, 30-second per mile pace.

Meanwhile, the researchers measured how the runners’ biomechanics and pace changed with each blade configuration.

“Biomechanically, the idea makes sense: Longer legs equal longer steps, so you would think you should be able to run faster,” said first author Paolo Taboga, an assistant professor of biomechanics at Sacramento State University who worked on the study while a postdoctoral researcher in Grabowski’s lab. “But we found that while you do take longer steps, you cycle your legs slower so in the end the two even out.”

The myth of the height advantage

That reality probably holds true for runners with biological legs, too.

“Being taller does not make you faster,” said Grabowski.

The assumption that it does is taking a heavy toll on Paralympic hopefuls. Since the rule change took effect in January 2018, some athletes have had to spend thousands of dollars on new prostheses and months retraining themselves to run at a shorter height.

Team USA Paralympic sprinter Regas Woods, whose profile states his height as 5’10,” had to lower his standing height inches after the change and expressed his discontent on Twitter: “I’m not 5 foot 4. Thanks for making me more disabled.”

Olympic hopeful Blake Leeper, a double-below-the-knee amputee vying to compete against runners with biological legs in the 2020 Olympics, has also been affected, with the International Association of Athletics Federation (IAAF) prohibiting him from racing in the IAAF World Championships in Qatar last fall due, in part, to the fact that his blades hadn’t been classified under the new standing-height formula. 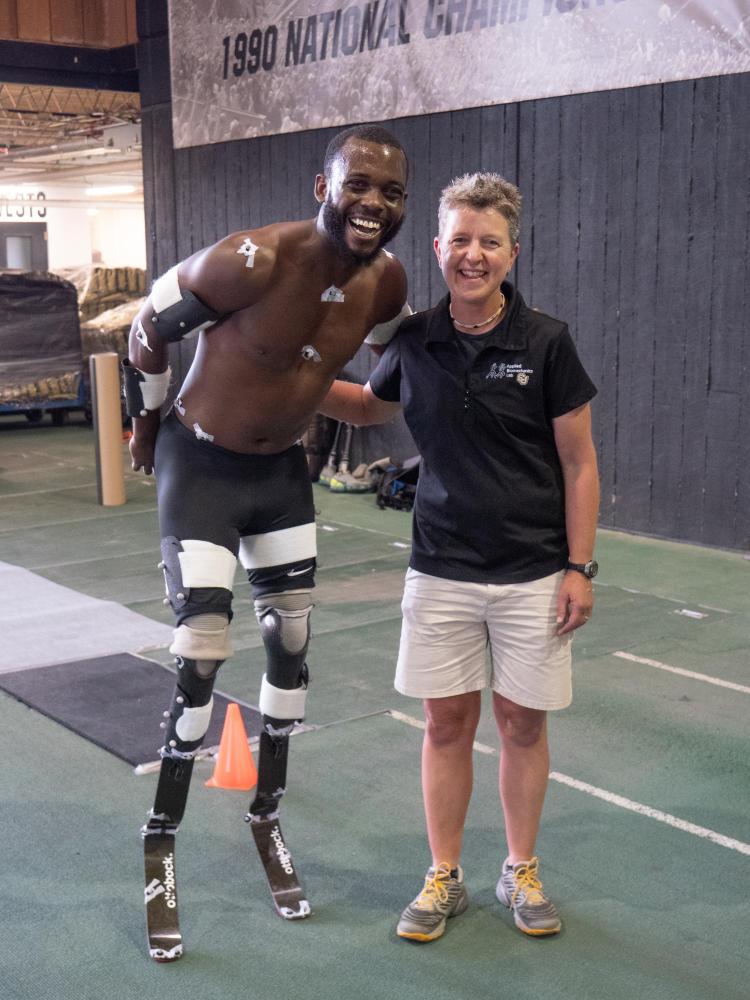 Alena Grabowski with Olympic hopeful Blake Leeper, during a visit to CU in 2018. A new study suggests height is not necessarily an advantage for athletes like Leeper.

Some athletes have suffered injuries while trying to adjust to their shorter blades, said Cathy Sellers, former director of U.S. Paralympics Track and Field. And because the rule, which bases allowed height on the dimensions of the athletes’ trunk and intact limbs, does not account for growth with age, some younger athletes are avoiding competition altogether.

“Once you are measured, that’s the height you are allowed to be the rest of your life,” said Sellers, noting that some teenage athletes are waiting to compete in sanctioned events.

The rule could also effectively exclude amputees whose residual limbs are already long from competing at the Paralympic level, noted co-author Owen Beck, now a postdoctoral fellow at Georgia Institute of Technology.

“We would like to see fair and inclusive rules and regulations, which is the beauty of the Paralympic Games,” Beck said.

The authors acknowledge that their sample size of five is small. But so is the pool of double, below-the-knee amputees sprinting at the elite level, and it is one of the only studies ever to look at this.

They see the need to do a larger study.

For now, they hope the International Paralympic Committee will take a look at their study and consider doing away with the height restriction altogether.

Survivors of events like the recent Marshall Fire may face what sociologist Lori Peek called "the long tail of disaster-related trauma." She argues these survivors need mental health resources and support from friends and family long after the television cameras are gone. END_OF_DOCUMENT_TOKEN_TO_BE_REPLACED

A global study of 13,000 individuals found people around the world base their opinions of COVID-19 policies on who supports them, not what's in them. It suggests scientists and bipartisan coalitions, not political elites, should be the first ones to communicate pandemic plans. END_OF_DOCUMENT_TOKEN_TO_BE_REPLACED

As COVID-19’s omicron variant surges throughout many parts of the country and in Boulder County, researchers Kristen Bjorkman, Dan Larremore, Leslie Leinwand and Roy Parker are providing info to improve people’s awareness and safety. END_OF_DOCUMENT_TOKEN_TO_BE_REPLACED
Return to the top of the page