Nearly 100 scientists and staff from around the world, including CIRES scientist Ted Scambos, departed last month to conduct fieldwork in one of the most remote and inhospitable areas on Earth: Thwaites Glacier in West Antarctica. Their aim? To investigate how and when climate change might affect the glacier, including a possible runaway collapse, which would raise global sea levels by up to two feet over the next century and put coastal cities and communities around the world at risk. 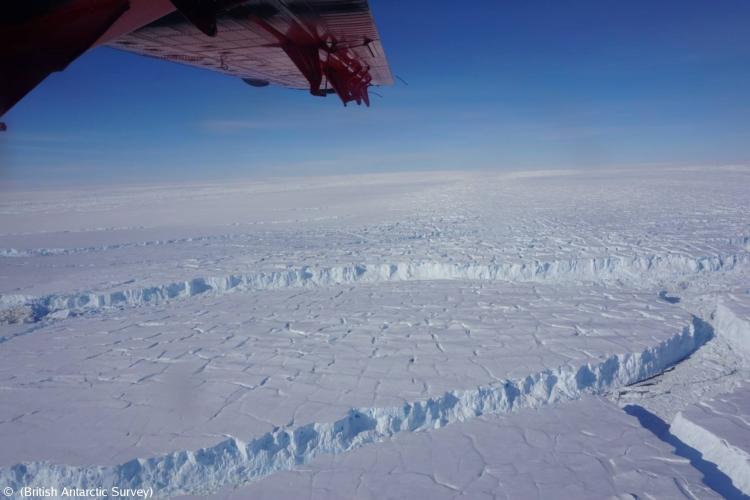 “We have been studying this area for many years, but mostly through satellites because it is so difficult to get to,” said Scambos, lead American scientific coordinator for the mission. “This is the biggest effort by far where we’ve actually placed scientists on the ground to study Thwaites Glacier.”

Research at Thwaites, which includes drilling into the ice, placing instruments in the ice and into the ocean beneath, is crucial to understanding the glacier and can only be gathered by traveling to the area, complementing satellite measurements.

Thwaites Glacier covers 74,000 square miles—an area the size of Florida—and is particularly susceptible to climate and ocean changes. Over the past 30 years, the amount of ice flowing out of the region has nearly doubled, and computer models show that over the next several decades, the glacier may lose ice even more rapidly. Research that will be conducted in the field over the next few months will help to quantify the current rates of melt and ice movement, supplementing data gathered by satellites, and provide updated information for models.

This is the second of four field seasons for the International Thwaites Glacier Collaboration (ITGC), a joint five-year quest between the United States and United Kingdom to understand the glacier, the surrounding ocean system and its future contribution to global sea level. This field season takes place from November 2019 to March 2020 and includes two legs: the first, which will include on-the-ground research on Thwaites Glacier, and the second, in which researchers will investigate the ocean near the glacier aboard the Nathaniel B. Palmer, an icebreaker bound for the Amundsen Sea.

“This mission to study Thwaites Glacier really came about through a scientist-led effort, so it’s exciting to see these researchers off to the field,” said Betsy Sheffield, a project manager at the National Snow and Ice Data Center (NSIDC) and the U.S. Communications Lead for the ITGC’s Science Coordination Office (SCO). “It’s hard work in an extreme environment—it’s cold, remote, crevassed and dangerous. It takes a certain kind of person to want to work in the harsh environment that is Antarctica, and it requires extra safety precautions and planning to keep everyone safe. We’re looking forward to seeing and learning from the results that come from the field.”

Thwaites Glacier is extremely remote; the study sites on the glacier are about 1,000 miles away from both the UK’s British Antarctic Survey Rothera Research Station and the U.S. Antarctic Program’s McMurdo Station.

“This is going to challenge our logistics and science effort in every way,” said Scambos. “It’s a long way out there, it’s a huge project, the weather is notoriously bad and we’re aiming for some real innovative work. This is going to take the best effort of both nations, and a lot of teamwork.”

Five of ITGC’s eight research projects will be deployed in Antarctica, each focusing on different aspects of the glacier and its environment. This season’s projects include: Geological History Constraints on the Magnitude of Grounding-Line Retreat in the Thwaites Glacier System, Thwaites-Amundsen Regional Survey and Network Integrating Atmosphere-Ice-Ocean Processes, Melting at Thwaites grounding zone and its control on sea level, Thwaites Interdisciplinary Margin Evolution—The Role of Shear Margin Dynamics in the Future Evolution of Thwaites Drainage Basin and Thwaites Offshore Research.

ITGC is a five-year, $50 million joint U.S. and U.K. mission to learn more about Thwaites Glacier, its past, and what the future may hold. Significant contributions to the research are also coming from Sweden, Germany, and South Korea. The ultimate goal of the project is to predict how much Thwaites will contribute to global sea-level rise and how soon. ITGC is funded by the U.S. National Science Foundation (NSF) and U.K. Natural Environment Research Council (NERC).

In celebration of Earth Day’s 51st anniversary, CU Boulder Today explores 10 research-related discoveries that have the potential to positively change the way we live and soften humanity’s imprint on our precious planet. END_OF_DOCUMENT_TOKEN_TO_BE_REPLACED

By looking at this newly emerged bird, a CU Boulder-led research team found an ‘evolutionary shortcut’ for speciation. END_OF_DOCUMENT_TOKEN_TO_BE_REPLACED
Return to the top of the page